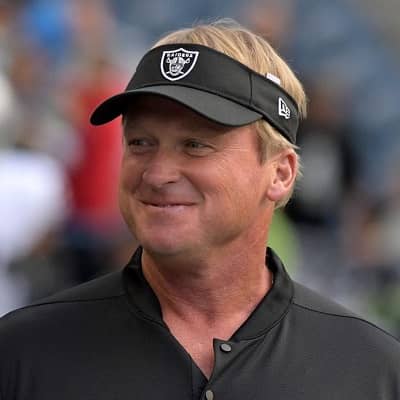 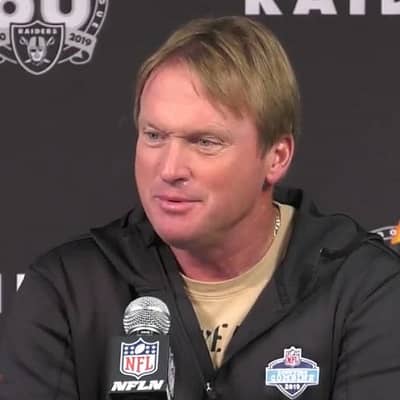 Jon Gruden is an American football coach who is the head coach of the Las Vegas Raiders of the National Football League. Jon Gruden also served as an analyst for ESPN and Monday Night Football

Born on August 17, 1963, Gruden’s full name is Jon David Gruden. in 2022, he is 59 years old. He is of Slovene descent and was born in Sandusky, Ohio. He belonged to a sports family with his father Jim who served as a professional football regional scout, quarterbacks coach, and director of player personnel for the Tampa Bay Buccaneers. Similarly, his brother Jay played and coached in the Arena Football League. He was recently the head coach of the Washington Redskins. However, his other brother James was a cardiologist. Apart from this, Jon has not mentioned his mother or her occupation. Growing up, Jon was a Cleveland Browns fan. 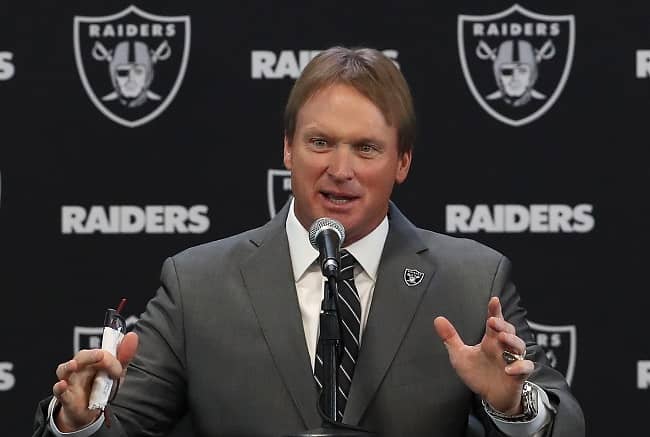 When Jon was 15, his father served as an assistant at the University of Notre Dame. So he moved to Indiana and attended Clay High School. He graduated high school in 1981 and moved back to Ohio where he joined Muskingum College. But after a year, he transferred to the University of Dayton where he was a three-year letterman and backup quarterback for the Flyers. He graduated in 1986 with a degree in communications.

Right after graduation, Gruden began his coaching career as a graduate assistant coach at the University of Tennessee. After a year in Tennessee, then Gruden served as the quarterbacks’ coach at Southeast Missouri State for 2 years. Later he was hired by Walt Harris who was one of the offensive coordinators at Tennessee. He hired Gruden at the University of the Pacific. Afterward, he worked with the San Francisco 49ers. In March 1991, Gruden got into the University of Pittsburgh as the wide receivers coach under head coach Paul Hackett.

After spending a few years as a college coach, Gruden got his first professional coaching job in 1992 when he was hired to be the special offensive assistant coach for the Green Bay Packers. He spent 3 years with the Packers and then moved to the Philadelphia Eagles as their offensive coordinator.

For the 1998 season, the owner and general manager of the Oakland Raiders, Al Davis hired Gruden as the head coach. After two straight losing seasons, the Oakland Raiders improved to 8-8 under Gruden. The record was replicated in the next season too. But in 2000, Gruden got veteran quarterback Rich Gannon on the team and the team went from 8-8 to 12-4, winning the AFC West. Moreover, they made the playoffs in three consecutive seasons from 2000 to 2002.

After completing 4 seasons with the Raiders, Gruden replaced Tony Dungy as head coach of the Tampa Bay Buccaneers. The Bucs had to make a massive trade to get Gruden as the coach. They ended up giving up two first-round picks, two second-round picks, and a whole lot of cash. But it was all worth it. Within a year under Gruden, The Bucs’ offense improved. Moreover, the team coasted to the Super Bowl, the first in the franchise’s history. They played against Gruden’s former team, the Raiders. His familiarity with Gannon and the Raiders helped Gruden make the perfect game plan. The Bucs came away with a 48-21 victory and a Super Bowl ring. Consequently, Gruden became the youngest head coach to win the Super Bowl at age 39.

However, the cost of the Superbowl was quite high. The team was unable to afford replacements for the players who were decimated by injuries. The Bucs missed the playoffs in 2003 with a 7-9 record and then fell to 5-11 the year after. 2004 was also a no-good year for the team. In 2004, former Raiders general manager Bruce Allen joined the Buccaneers. By 2004-2005, the Bucs started getting back on track. Moreover, 2005 marked a return to the playoffs. However, in 2006, Gruden had his worst record as a head coach with a dismal 4–12 season.

Gruden’s journey with the Buccaneers had many highs and lows. But in 2009, as they were making recovery, the Buccaneers again ended the season with four losses in a row. Consequently, Gruden was fired on January 16, 2009.

After ending his contract with the Buccaneers Gruden served as a color analyst on its Monday Night Football telecasts on ESPN.

Contributing 34 years of his life to American Football, Gruden has served as a coach for more than two teams and as an analyst. His work has brought him both fame and money. Today he stands at a net worth of 22.5 million USD. Moreover, he still has a long contract remaining. So expect that number to grow.

Jon is a married man. He met the love of her life while he was a graduate assistant at the University Of Tennessee. His future wife Cindy Gruden studied Classical Piano and Music Education plus Educational Administration at the same university. Moreover, she was part of the cheerleaders’ squad. They quickly became friends and eventually started dating.

The two tied knots on July 6, 1991. Since then, the couple has had three sons Deuce, Michael, and Jayson. Elder son Deuce, followed in his father’s footsteps and worked as a coaching intern with Washington Redskins. Later, he was hired as the assistant coach for Oakland Raiders. 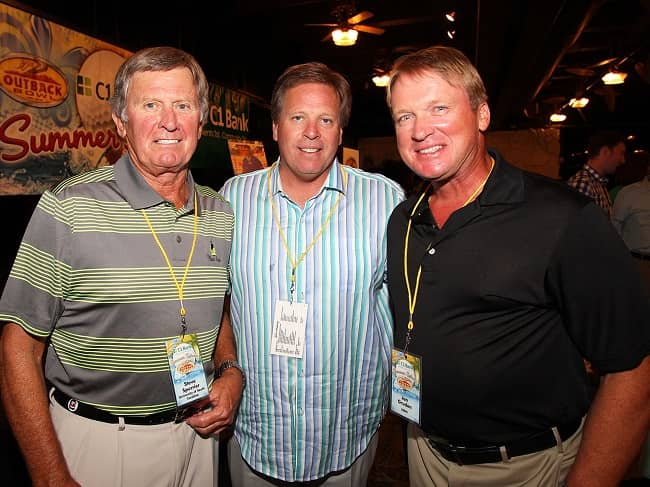 57-year-old Jon is still an active and fit man. He stands 5 feet 10 inches tall. He is slightly overweight with a body mass of 91kgs. However, for now, there are no details on his other body measurements. Some of his other physical features include blue eyes and blonde hair. 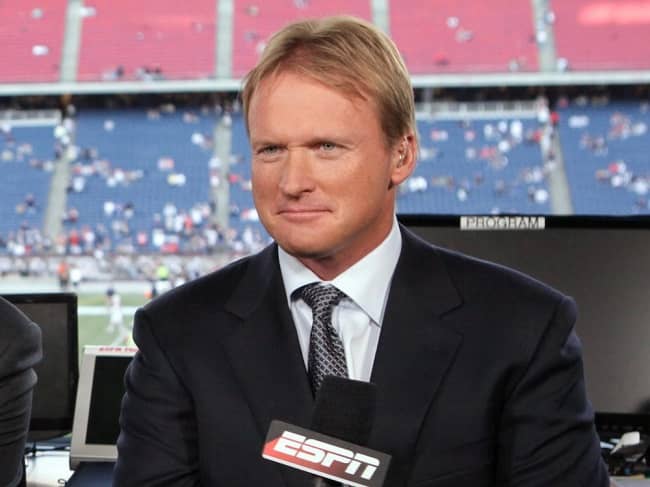 Regarding, Gruden’s social media presence, he is quite active on Instagram. However, most of his posts are related to his professional life. He even goes by the user name @raiders_headcoach and has around 2.9k followers. Looking into Facebook and Twitter, Jon has created accounts under his name but is not active at the moment.