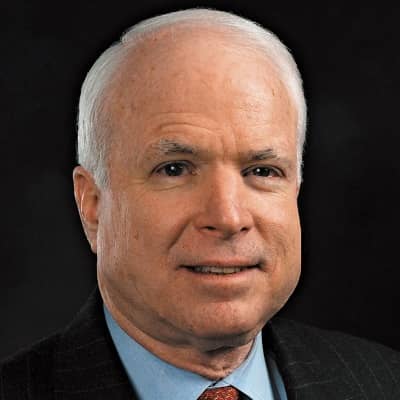 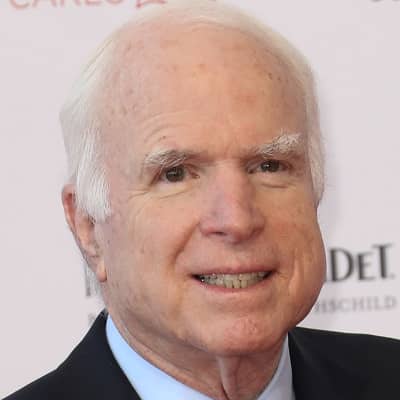 John McCain is an American politician and naval officer. Moreover, John McCain served as the United States Senator from Arizona from 1987 until he died in 2018.

John Sidney McCain III best known as John McCain was born on the 29th of August, 1936, in Coco Solo, Panama Canal Zone, the United States of America. He died at the age of 81 years old and had an American nationality.

Moreover, he belongs to mixed ethnicity of Irish-Scottish-English-Welsh descent and had a birth sign of Virgo. In addition, he is the son of John S. McCain Jr (father) and Roberta McCain (mother). Professionally, his father is a naval officer. He grew up with his two younger siblings, Joe and Sandy.

Regarding his academic career, he studied in around 20 schools. Moreover, he attended Episcopal High School, a private preparatory boarding school in Alexandria. He excelled at wrestling and earned his degree in 1954.

McCain passed away on August 25, 2018, at his residence in Cornville, Arizona. He passed away just four days before his 82nd birthday at the age of 81 years old. In addition, he was battling cancer.

His family announced the day before his death that he would no longer be receiving cancer therapy. His body will go to Washington on August 31 to lie in state in the rotunda of the United States Capitol before a ceremony at the Washington National Cathedral on September 1.

John McCain was assigned as a naval pilot of ground assault aircraft. He was a lieutenant commander on July 29, 1967, when he was at the center of the USS Forrestal fire. In addition, he was the Navy’s Liaison to the United States Senate in 1977. He resigned from the Navy as a pilot on April 1, 1981.

McCain campaigned as a Republican for the seat being left by 30-year incumbent Republican John Jacob Rhodes in Arizona’s 1st congressional district in 1982. He was appointed to the House Committee on Interior Affairs in 1983 after being chosen to lead the new group of Republican Representatives.

His Senate tenure began in January 1987. He took the place of a long-serving American conservative icon and Arizona fixture. He was appointed to the Commerce and Indian Affairs Committees.

In addition, he maintained his support for the Native American agenda. He made a well-received speech at the 1988 Republican National Convention and was considered in the press as a possible vice-presidential running mate for Republican nominee George H. W. Bush, and he was appointed the chairman of Veterans for Bush.

As a member of the Senate Select Committee on POW/MIA Affairs from 1991 to 1993, he studied the Vietnam War POW/MIA problem to determine the fate of US military men identified as missing in action during the Vietnam War.

McCain was appointed chairman of the influential Senate Commerce Committee in 1997. In November 1998, he was re-elected to a third Senate term. His book, ‘Faith of My Fathers,’ co-written with Mark Salter, was released in August 1999.

He won New Hampshire’s primary on February 1, 2000. After the September 11, 2001 attacks, he supported Bush and the US-led war in Afghanistan.mOn February 5, 2008, he won the majority of states and delegates in the Republican Super Tuesday primaries, putting him in charge of the Republican candidacy.

He praised the surge approach for reducing violence in Iraq in March 2008. Moreover, he rose to prominence as a leader of the Republican opposition to President Barack Obama’s 2009 economic stimulus program. 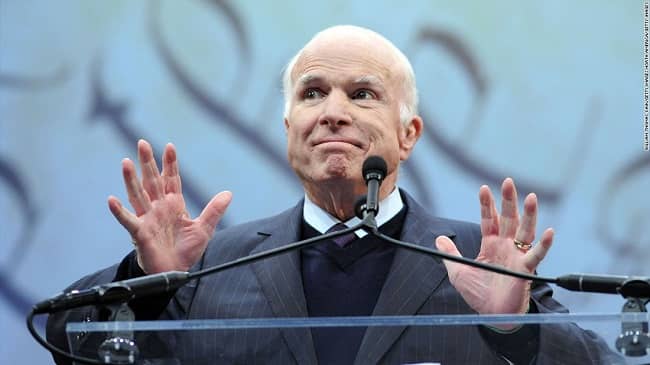 In 2013, he was a member of the “Gang of Eight” a bipartisan group of senators that unveiled ideas for another attempt at comprehensive immigration reform. In July 2013, he was in the front of a senatorial deal to end filibusters against Obama administration executive nominees without Democrats resorting to the “nuclear option.”

As the 114th United States Congress convened in January 2015, with Republicans controlling the Senate, he was appointed chair of the Armed Services Committee.

McCain withdrew his endorsement of Trump in October 2016 when hot-mic footage from a 2005 entertainment television program surfaced in which Trump talked to a reporter about predatory sexual exploits.

Following Trump’s election, McCain was among a small group of Republicans who criticized the new president’s warm overtures to Russia and its president, Vladimir Putin, despite the intelligence community’s assessment that the Russian government meddled in the 2016 U.S. presidential election.

McCain joined Democrats in asking for the formation of a special committee to examine Russian election interference and any coordination by the Trump campaign.

Surgery, returned to the Senate, and books

He was diagnosed with glioblastoma, a common but very deadly brain tumor, in mid-July 2017, following surgery to remove a blood clot above his left eye.

McCain returned to the Senate on July 25 to provide a key vote to initiate discussion on the Republican effort to repeal the Patient Protection and Affordable Care Act (PPACA, “Obamacare”). He urged the Senate to return to “regular order,” transcend partisanship and work toward agreement after casting his vote.

McCain co-wrote several books, including Faith of My Fathers (1999), Worth Fighting For: A Memoir (2002), Why Courage Matters: The Way to a Braver Life (2004), Hard Call: Great Decisions and the Extraordinary People Who Made Them (2007), Thirteen Soldiers: A Personal History of Americans at War (2014), and The Restless Wave: Good Times, Just Causes, Great Fights, and Other Appreciations (2018).

During his military career, he has earned several awards. The Silver Star, two Legion of Merits, the Distinguished Flying Cross, three Bronze Star Medals, two Purple Hearts, two Navy and Marine Corps Commendation Medals, and the Prisoner of War Medal are among his various military honors and awards.

At the time of his death, his net worth was estimated around $100 million and there is no other information regarding his income and salary.

This late American politician was married twice in his life. Firstly, he married a model from Philadelphia,  Carol Shepp on the 3rd of July, 1965. He adopted her two kids, Douglas and Andrew. They eventually had a daughter called Sidney.

However, they divorced in February 1980. The divorce settlement includes two properties and financial support for her medical treatments as a result of the car accident. 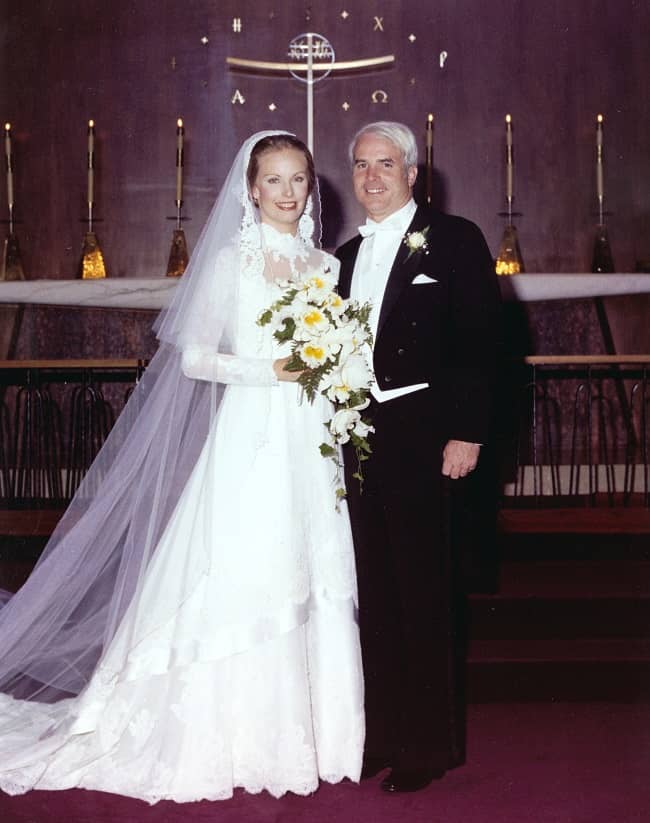 Later, he started dating Cindy Lou Hensley who was a teacher from Phoenix, Arizona. On the 17th of May 1980, the couple married. He left the majority of his family’s assets in her name. Meghan, John Sidney, and James are their children.

Cindy adopted a three-month-old daughter from a Bangladeshi orphanage who needed medical attention in 1991, and they both adopted and called her Bridget.

This American politician stands 5 feet 8 inches tall and his weight is unknown. Likewise, he has brown eyes with white hair color and there is other information regarding his other body measurement. 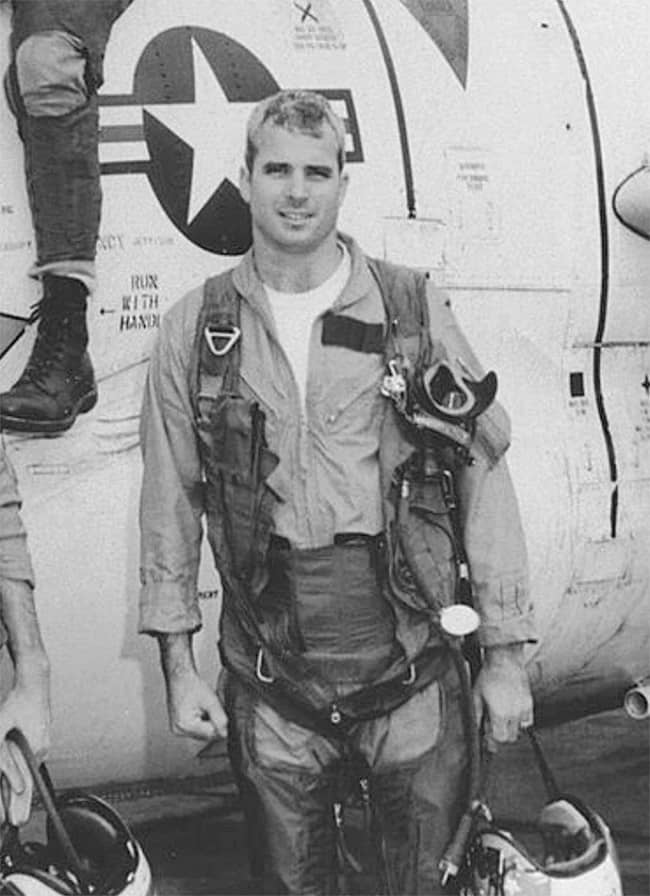