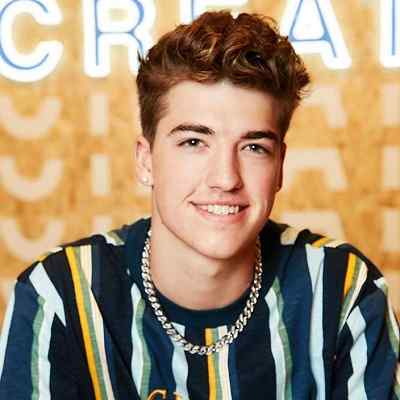 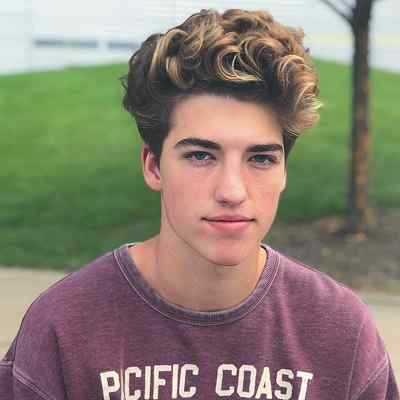 Joey Klaasen is an American prominent TikTok creator who has amassed more than 18 million fans to his @joeyklaasen account through his creative and comedic content. Joey Klaasen also gained popularity as the younger brother of pop singer Jon Klaasen.

Joey Klaasen is 23 years old. He was born on April 10, 1999, in Greenwood, Indiana, the USA, under the astrological sign Aries. His mother’s name is Karen Klaasen and his father’s name is Bob Klaasen. Currently, he resides in Cincinnati, Ohio, USA. Likewise, he has an older brother, Jon, and also a pet cat, Charlie. Usually, he features his parents, brother, and cat on his social media pictures and videos. 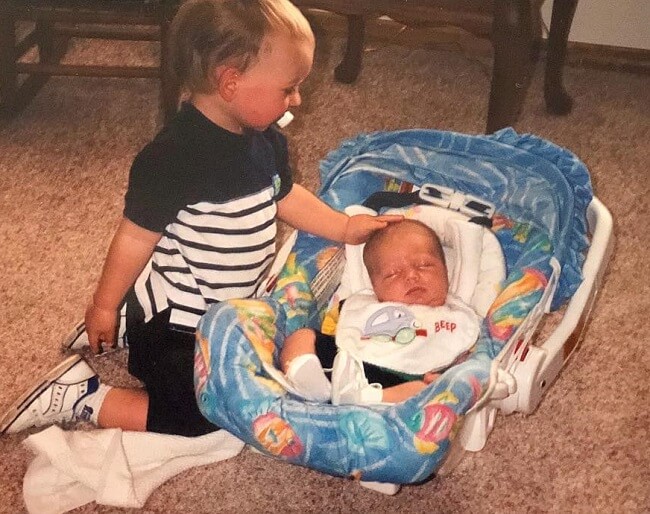 Caption: Joey Klaasen’s childhood photo on the basket while his brother Jon taking care of him (Source: Instagram)

Moving toward his educational background, he went to ‘Center Grove High School’ in Greenwood, Indiana. He was a very brilliant student, scoring a 4.2 GPA (Grade Point Average) in high school and a talented athlete too. Then, he applied to many medical schools in the country after graduating from high school.

Later, he enrolled in the pre-medical program at the University of Cincinnati and is currently studying there. He loves playing basketball and his favorite basketball team is ‘Indiana Pacers’ and Reggie Miller and Ray Lewis are his favorite athletes. He enjoys traveling to new places and spending time with his family.

Joey Klaasen is an American social media star as well as TikTok personality. He gained fame as the younger brother of pop singer, songwriter, and actor, Jon Klaasen. Likewise, his brother rose to fame on the talent hunt show ‘The X Factor (US)’ and was part of the boy band group ‘Forever in Your Mind’. Unlike his brother, he did not choose the musical path, but quite active on social media and is an excellent basketball player.

Being an exceptional talent for basketball, he was selected for his high school’s boy’s basketball team ‘Trojans’standing 6 feet 4 inches at that time. He used to play at the forward position on the team and emerged his dribbling, shooting, and teamwork skills to overwhelm his coach and earn the respect of his team members. With an athletic build and excellent gameplay, he became a natural on the basketball court.

In 2017, he became the ‘Trojans’ top field goal shooter and gained impressive statistics to his name. During the off-seasons, he worked hard at developing his gaming skill and became a regular and dependable player for the team.
He has won several accolades from his peers and high school coach with his tall frame, talented moves on the basketball court, and rigorous discipline as an athlete.

In 2018, he got a description as ‘the glue that holds the Trojans together’ by a basketball publication. Ans he was often referred to as the ‘glue player’ (players who are the epitome of a team player). His high school basketball coach brought a tremendous team spirit atmosphere to the game on him. He became excellent in the classroom and on the basketball floor, and a role model to younger players. His peers as well as teammates also have appreciated his hard work and dedication. He has even played at the small forward position in the ‘Indiana Elite Force 2018’ basketball team. 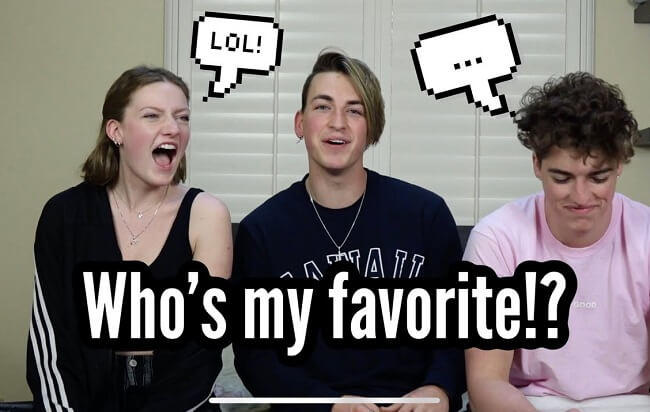 Side by side, he has also been very active on social media while playing basketball and studying in high school. He has earned a tremendous fan following on social media app TikTok for creating and sharing short videos. He posts videos fairly regularly on the platform. His TikTik video he posts generally consists of funny videos, sing-alongs, challenges, pranks, dance-offs, etc. set to the sound of the latest pop or rap songs.

Likewise, he also seldom makes videos to the tune of his original music. Most of his recent videos feature his brother Jon, where he video call his brother and made a random video. He has garnered more than 17.4 million followers, with almost 544.3 million likes.

Further, he is active on Instagram and Snapchat. In 2014, he started posting on Instagram, including his “Swaggalicious Sundays” posts, where he showcased some of his tricks shot and athletic abilities. So far, he uploaded 238 posts on Instagram handles @joey_klaasen which has granted almost 786k followers.

He also has a self-titled YouTube channel launched on June 14, 2013, where he started posting videos on July oof 2019. He posted the first debut video titled “BEST TIKTOK COMPILATION- Best of Joey Klaasen’s Tiktoks.” On November 19, 2019, he posted a video titled “Beatbox Tutorial w/ Spencerx.” In this video, he featured his brother and was suggested by his fans. The video successfully granted almost 162K subscribers.

Speaking about Joey Klaasen’s earnings, this social media personality has garnered quite a considerable sum of money through social media platforms. However, he has yet to proceed with his professional career. His growing fame might place him in the entertainment industry making a good fortune.

Though his exact earnings are not available on the web, his net worth is estimated at around $1 million- $5 million (As of 2022). Undoubtedly, he is enjoying his good fortune.

Reflecting on Joey Klaasen’s personal life, he is straight and probably single. So far, he has not uploaded any posts currently regarding his girlfriends. He might be currently enjoying his single life. 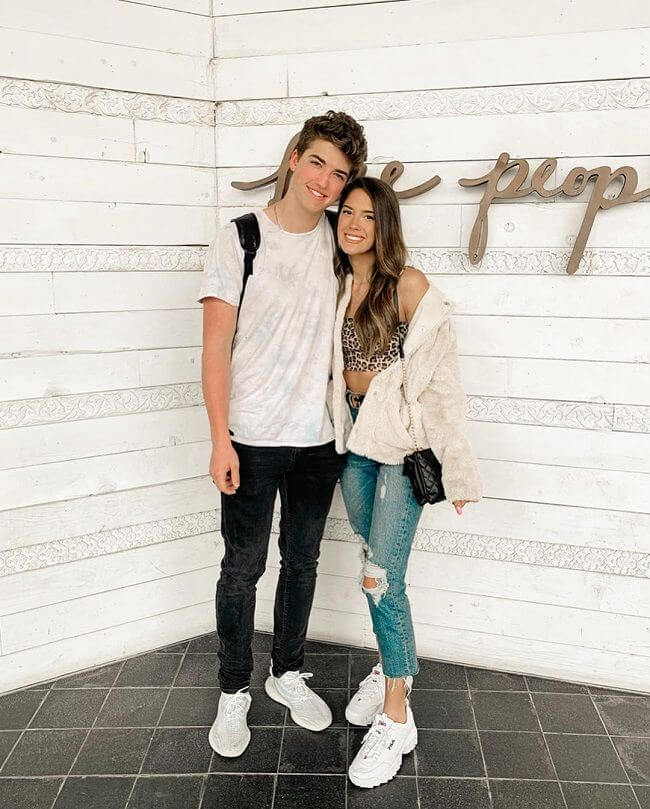 Caption: Joey Klaasen posing in a photo with his then-girlfriend (Source: Biography Mask)

Previously, he has dated a fellow TikTok star Victoria Bachlet in 2019. He used to often featured her on his social media feed, performing challenges, playing pranks on him, and generally having a good time together. However, the duo broke up.

The 21-years-old Joey Klaasen has an athletic body build. He has maintained a fit body. He stands a good tall height of 1.93 m i.e. 6 feet and 5 inches tall. Likewise, he has a biceps size of 15 inches, a chest size of 43 inches, and a waist size of 33 inches. He has a pair of green eyes and brown hair color. He wears a shoe of size is 10 US.

Moving on, he is active on different social media platforms like Instagram, YouTube, TikTok, etc. On Instagram, he goes by the handles @joey_klaasen with almost 823k followers. Likewise, he has garnered more than 18 million followers with almost 577 million likes on the TikTok account.

Additionally, he runs a self-titled YouTube channel where he has garnered almost 185K subscribers and has more than 3.5 million total views. He has even provided his email id [email protected] for any kind of business inquiries.