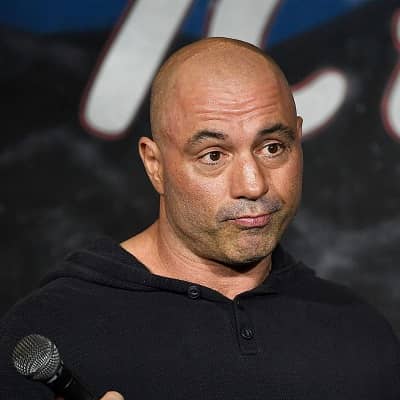 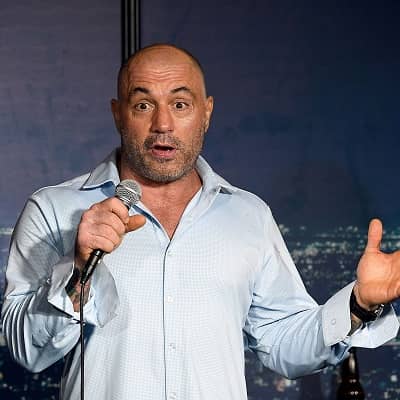 Joe Rogan is a comedian, podcast host, and mixed martial arts, color commentator. Joe Rogan has served as a TV host and an actor as well. Moreover, Rogan formed his own podcast “The Joe Rogan Experience” in 2009, which also helped him to receive fame, wealth, and podcast superstardom.

The 53-years-old comedian Joe Rogan was born on 11th August 1967, in Newark, New Jersey. He has 3-quarters Italian and 1-quarter Irish ancestry. Likewise, he is an American native and his age is fifty-three years. He was born as Joseph James Rogan to his father, Joseph Rogan, and mother, who is still unknown. Also, he follows the Agnostic religion even though he was raised as Catholic. his parents divorced when he was just five years old. After he turned seven years old, he has not contacted his father.

Then, he along with his family migrated to San Francisco, California. Again when he was eleven years old, they again went to Gainesville, Florida. At last, they stayed in Newton Upper Falls, Massachusetts. Regarding Rogan’s education, he went to Newton South High School and graduated from there in 1985. At that time, he also was fond of playing basketball and he also took part in Little League Baseball. Then, he also began taking karate lessons.

He took a part in several taekwondo competitions and has even won US Open Championship as a lightweight when he was nineteen years old. After some time, he became the taekwondo trainer. Then, he was learning amateur kickboxing. Since then he began getting headaches more often and he also got injured. He retired from competition when he was twenty-one years old. Moreover, he joined the University of Massachusetts Boston but he quit without graduating from there. 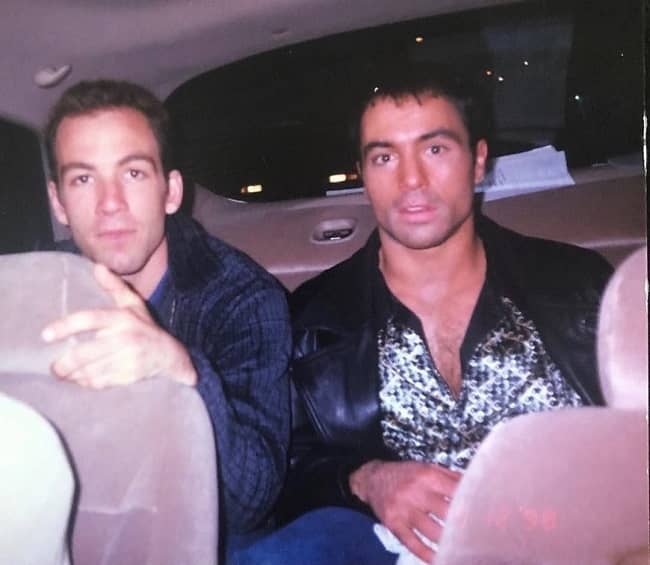 Caption: Joe Rogan with his friend when he was young (Source: Instagram)

After being retired from the kickboxing career, he went on to be a comedian. He was a fan of comedy and his friends persuaded him to give an attempt at stand-up comedy. Then he started preparing for it. He is his first performance on 27th August 1988 at an open-mic night at the Stitches comedy club in Boston. After that, he achieved gigs at bachelor parties and strip clubs. He migrated to New York City and started residing with his grandfather for the first six months in 1990.

There he also was a full-time comedian. After that, she went to Los Angeles. His first presence on TV was in 1994 on the MTV comedy show “Half-Hour Comedy Hour”. His first TV appearance helped him to earn various networks as well. Similarly, his first main role was in the – episode Fox sitcom, Hardball in 1994. At that time, he also represented in Hollywood at “The Comedy Store”. Then, he performed at the club for the following thirteen years without any cost.

He even did the payment for the venue’s latest sound system. After that, he was present in the NBC sitcom NewsRadio and his role was of an electrician and handyman,  Garrelli in the show’s imaginary news radio station from the year 1995 to 1999. Unfortunately, after he befriends, Phil Hartman’s death, his career as a comedian was affected. His every gig was canceled after that. Then he served on a pilot for a show, “Overseas”.

He then started serving as backstage and post-fight interviewer for the mixed martial arts promotion Ultimate Fighting Championship. After 2 years, he left due to his less wealth that was unable to cover his traveling to the events. Dana White who was the new president of UFC provided him an occupation as a color commentator in the year 2001. However, he at first rejected the offer but later he accepted the profession for free in 2002. After doing 15 free gigs as a commentator began taking the payments from his profession. He was working together with Mike Goldberg until 2016. He even was the host of the weekly UFC TV show “Inside the UFC”.

In 1999, he achieved a 3-album deal with Warner Bros, Records. He began his own prime-time TV sitcom on Fox, “The Joe Rogan Show”. Moreover, in December 1999, he recorded his first stand-up comedy album in 2 shows. The albums were out in 2000. He was also present in a movie and a cartoon along with his friend, Chris McGuire in 2001. In the same years, he started to operate a blog on his website. His own TV show development was disturbed after he accepted to become the host of the American edition of Fear Factor in 2001. Then, he at first rejected the offer as he knew that the show would be canceled after some episodes. Eventually, the show grew his national discovery and promoted his stand-up gigs in a beneficial way.

Fear Factor was running from 2001 to 2006 for 6 seasons. Later, the show got back for a 7th and last season from 2011 to 2012. In 2002, he also was present in an episode of “A Beautiful Mind”. Then in December 2002, he became the emcee for the Blockbuster Hollywood Spectacular, a Christmas parade in Hollywood. In February 2003, Rogan turned into the latest co-host of the 5th season of “The Man Show” on Comedy Central. However, the show finished in 2004. Then, the actor, Wesley Snipes challenged him for a cage fight and he coached for the event for 5 months. Later Snipes backed out.

In May 2005, Rogan made a deal with the Endeavor Talent Agency. Likewise, he recorded his 2nd stand-up comedy special Joe Rohan: Love, in Phoenix, Arizona, which was out on Showtime in 2007. He made allegations against comedian Carlos Mencia for stealing his jokes which cost him The Comedy Store deal. Later, he made a deal with William Morris Agency. Then, in 2013, he got back to The Comedy Store. In April 2007, Comedy Central Records brought the 4th comedy special. Shiny Happy Jihad.

Rogan became the host of the CBS Game Show in My Head in January 2009. However, the show came to an end after it publicized 8 episodes. In addition, Rogan began a spare podcast with his friend, Brian Redban, and his others in 2009. The podcast’s name was “The Joe Rogan Experience”. The Joe Rogan Experience was in the list of Top hundred podcasts on iTunes. SiriusXM Satellite Radio which was lifted in 2011. By 2015, it turned into one of the most famous podcasts.

Then, his first main role in a film was out in 2011 in the film “Zookeeper”. Rogan then became present in the action-comedy of 2012 “Here Comes the Boom”. His book “Irresponsible Advice from a Man with No Credibility” was also out. Similarly, his 6th comedy special Live on his website was out in December 2012. He even charged $5 for each download. In 2013, Rogan then became the host of his own 6-episode TV show “Joe Rogan Questions Everything” on the SyFy network. 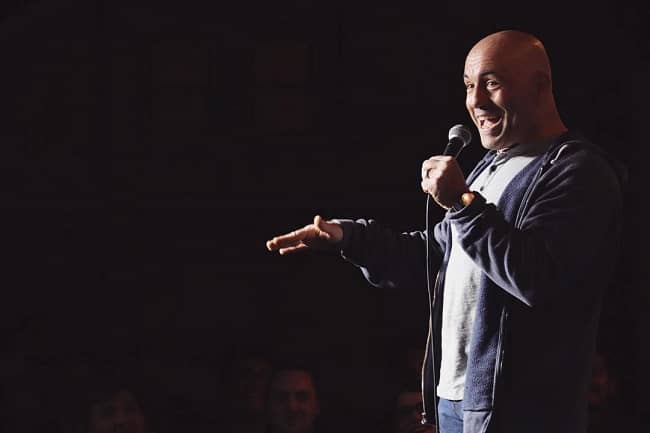 Rogan won the Wrestling Observer Newsletter Award for the Best TV Announcer. He won the same award twice in the year 2010 and 2011. Likewise, in the years 2011, 2012, 2014, and 2015, Rogan became the winner of the World MMA Awards which gave him the name of MMA Personality of the Year.

The famous comedian has a great net worth of around $25 million. Joe Rogan has been earning his net worth from his performance in various stand-up comedy gigs. Similarly, he has also earned some money from his profession as a commentator and also from his presence on various TV shows and movies.

Joe Rogan’s wife is a former cocktail waitress whose name is Jessica Ditzel. The couple’s wedding was in the year 2009. Together the duo has two kids. Similarly, he is also the stepfather of his wife’s daughter from her past relationship. The family used to reside in Boulder, Colorado.  As of now, they are living together in Bell Canyon, California. Besides this, the famous personality has never been in any kind of rumors and controversies. 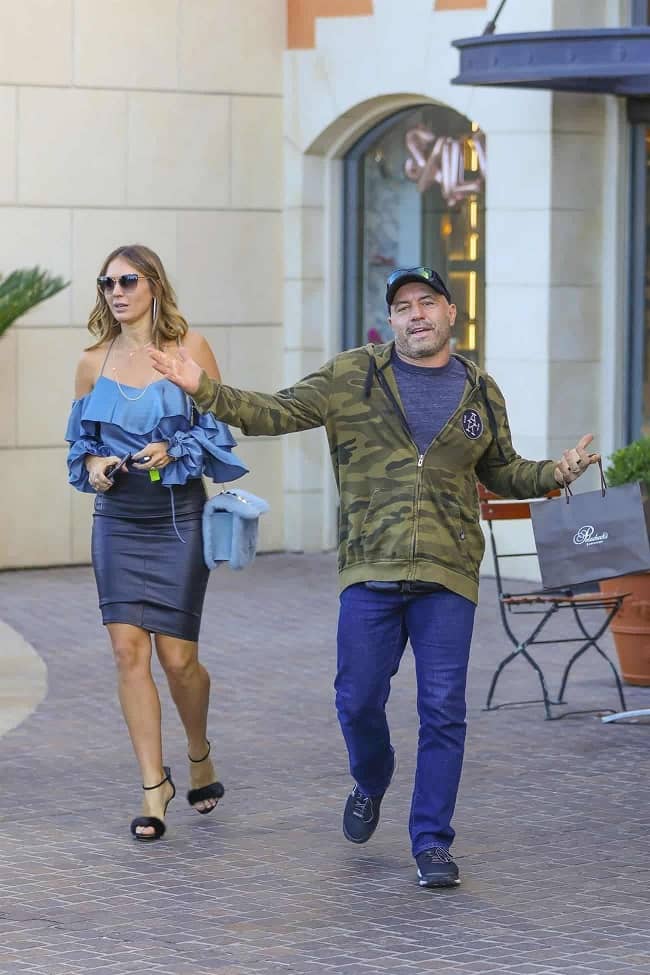 The comedian has an average height of 5 feet 8 inches or 1.72 m. Similarly, Joe weighs around 86 kg or 190 lbs. He has a pair of brown eyes with usually shaved bald heads. Apart from this, there is no further information regarding Rogan’s body measurements, the size of his biceps, and his shoe size. However, the comedian seems to be happy and healthy as of now.