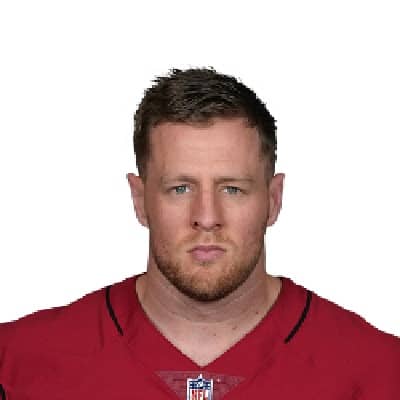 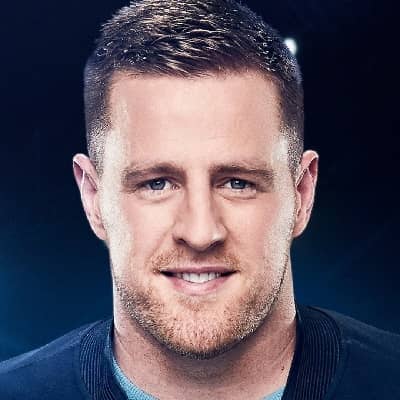 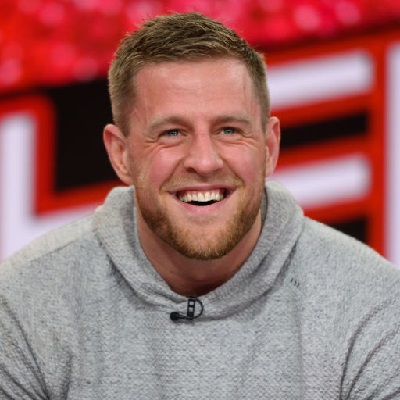 JJ Watt is a professional American football player who plays in NFL(National Football League) for Arizona Cardinals as a defensive lineman. JJ Watts is considered to be one of the greatest defensive linemen in the history of the NFL. Not limited to football, he has also acted in some Tv Shows.

JJ Watts was born on March 22, 1989, in Waukesha, Wisconsin. Likewise, he is 33 years old. JJ was born to parents John Watt and Connie Watt. His father was a firefighter while his mother was building operations vice president. He is the oldest child of John and Connie. Both of his younger brothers, Derek and T.J play in NFL.

Both of them play for Pittsburgh Steelers. Derek is a fullback while T.J is an outside linebacker. As a child, watts tried several sports before he became passionate about football and decided to stick with it. From age 4 to 13, JJ was involved in ice hockey. JJ competitively played ice hockey and traveled to countries like Canada and Germany. His schedules soon clashed, and he ran into financial difficulties. Watt retired from hockey as a result.

JJ attended  Pewaukee High School located in his hometown. During his high school days, Watt played several other sports like track and field, baseball, and basketball along with football.

As a tight end and defensive end, he was named to the first-team All-State, All-County, All-Area, and All-Conference teams his senior year. He was also awarded MVP of the team. Watt had 399 receiving yards, 26 catches, and five touchdowns during his senior season.

Watt competed in the shot put during his senior year, receiving first-team All-state honors in the process. At the 2007 WIAA Division II Championships, he won the state gold in the shot put, setting a new school record with a throw of 59 feet, 11.5 inches (18.28 meters).

JJ watts received the scholarship and attended Central Michigan University. He then transferred to the University of Wisconsin-Madison. Watt did not complete his graduation but in 2018, he got a degree in Doctor of Humanities in Medicine from Baylor College of Medicine. 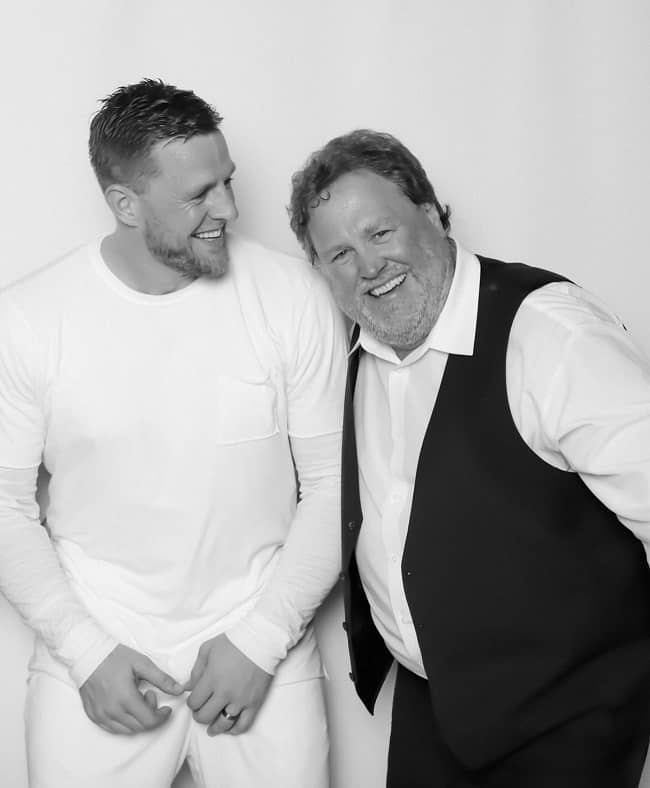 After Watt received a scholarship, he attended Central Michigan University. He appeared in 14 games during his tenure at Central Michigan. Watt, however, opted to leave Michigan and attend the University of Wisconsin after a number of his coaches advised he switch to an offensive lineman.

Watt then transferred to the University of Wisconsin-Madison where he was offered a scholarship to play defensive end. He was also named the Scout Team Player of the Year in Wisconsin. Watt used to work as a pizza delivery man for Pizza Hut in Pewaukee at the same time.

JJ Watt declared for the draft. He was the first defensive end picked in 1st round. The Houston Texans selected watts in the first round with the 11th pick in 2011. On July 13, 2011, Watt signed a four-year deal worth $11 million with the Texans. He made his NFL debut in the season opener against Indianapolis Colts. He had five tackles that game. Watt also had his first multi-sack victory game against the Jacksonville Jaguars on November 27.

He had 48 solo tackles, eight assisted tackles, and 5.5 sacks in his rookie season. The Texans also made the playoffs for the 1st time in the team’s history. Watt made a huge impact in the playoffs as they faced Cincinnati Bengals and Baltimore Ravens. In his rookie season, he got awarded Texans Team Rookie of the Year, USA Today All-Joe Team, and Pro-Football Weekly/PWFA All-Rookie Team.

The Texans underperformed as a team in 2013 after a successful season the previous year. Watt did, however, register his first two sacks of the season in a win over the Tennessee Titans in Week 2. Despite their all efforts, the Texans finished the season with a losing record of 2–14. Watt was Pro Bowl Captain and received a title in the 2014 NFL Pro Bowl.

Watt signed a deal worth $100 million with the Texans for extended six years. Likewise, he received $30.9 million as a signing bonus. He was the highest-paid NFL non-quarterback in 2014. Watt scored a touchdown in a game against the Oakland Raiders. On September 14, he became the first Texans player to score a touchdown from scrimmage. On September 8, He tied at sixth for longest interception return by a defensive lineman. Watt also has the fourth-longest interception return in the history of the Texans.

In a game against Buffalo Bills, he was given a red alert twice for roughing the passer after he hit the opposing players total of 9 times. Watt was fined $16,537 for the incident. He was named the AFC Defensive Player of the Month for September despite the incident. Cris Carter, team captain of Team Carter, selected Watt as captain of the defense after being impressed by his performance on the defensive end. He was awarded the Defensive MVP award after the Pro Bowl game. Since 2008,

Watt became the first defensive player to receive votes for the MVP award. He also won the Defensive Player of the Year award the same year. Watt became one of the few players to achieve the feat of winning the award multiple times. He became the first defensive lineman to score at least 5 touchdowns in 1 season since 1944. Watt was in the top spot of NFL Top 100 players of 2015.

Watt had a groin injury and a left-handed fracture in the 2015 NFL season. Despite that, he played all 16 games and recorded 76 tackles, an NFL-leading 17.5 sacks; eight passes defended, three forced fumbles, and a fumble recovery. In 2015, he received his third  Defensive Player of the Year award. Following his injury, Watt had surgery for a sports hernia on January 12, 2016. He was selected to his fourth straight Pro Bowl but withdrew as a result. He became the top defensive lineman and third-best player that season. Unfortunately, he had to undergo back surgery for a herniated disc on July 21, 2016. He shortly returned to start the season after being put on the disabled list. The Texans won against Chicago Bears on his return.

In week 2, against the Kansas City Chiefs, Watt recorded 1.5 sacks and five total tackles. In a game against the New England Patriots, he recorded two tackle assists in a game.  He had to undergo back surgery once more time on September 29, 2016. As a result, watt decided to forfeit the rest of the season. He was ranked 35th in 2017 despite playing only 3 games.

Watt returned in the season opener game against Jacksonville Jaguars. In week 5, he left the game due to his leg injury. He underwent the surgery the next day but he sit out for the remainder of the season. Watt was ranked 84th in 2017. He raised a total of $40 million for relief and recovery for the affected victims of Hurricane Harvey in the Houston area. To appreciate his humanitarian efforts, Watt was co-named the Sports Illustrated Sportsperson of the Year for 2017 and Walter Payton NFL Man of the Year.

In 2018, he returned in the season opener against England Patriots. After returning from the injury, Watt recorded five sacks, 20 tackles, and four forced fumbles and was named the AFC Defensive Player of the Month for September. Watt recorded nine tackles, 1.5 sacks, and a forced fumble in a game against the Tennessee Titans. He was also named the AFC Defensive Player of the Week after the win against the Tennessee Titans.

Watt received the fifth First-Team All-Pro award after he finished the season with 16 sacks.

For the first time in his career, Watt did not record any tackles and quarterback in the season opener. However, he recorded two sacks against the Los Angeles Chargers two weeks later. Watt got injured again after he suffered a torn pectoral. He was out for the remainder of the 2019 season. He resumed his practice with the Texans on December 24. Watt was on the field for a Wild-card playoff game against the Buffalo Bills on December 31, 2019. After a shoot-out goal, the Texans eventually defeated the Bills.

After the Texans released Watt,  he signed a 2-year deal worth $34 million which includes $23million guaranteed with the Arizona Cardinals. Watt was considered a risky signing for Arizona due to him being injury prone and his low scores last season. Despite that Arizona signed him. 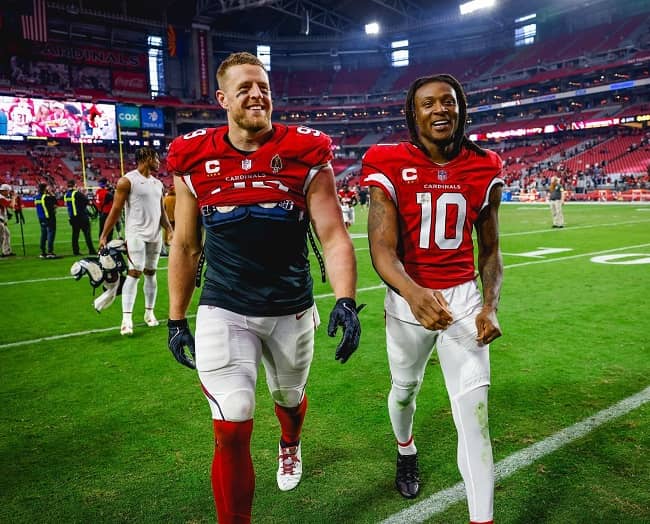 JJ Watts is a married man. He married his longtime girlfriend Kealia Mae Ohai, who is a professional footballer in 2020 in the Bahamas. Kealia plays for the Chicago Red Stars of the National Women’s Soccer League. She also represents the United States on the international level. The couple is yet to become parents but they do have two dogs named Tex and Finley. He is a great player and husband. There isn’t much information on his previous relationship.

Watt is a huge fan of football and he supports Chelsea F.C. 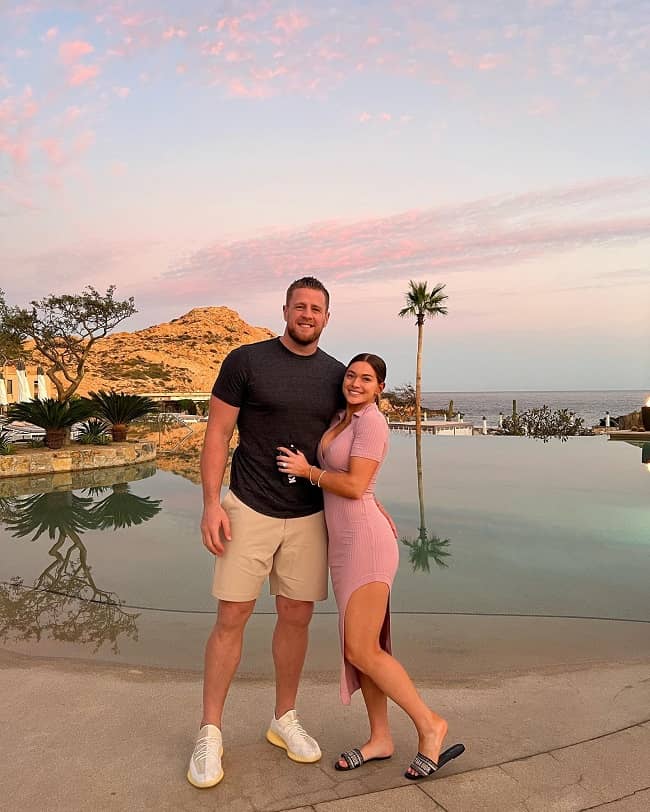 JJ Watts is a Philanthropist. He is a founder of the Justin J Foundation. His organization provides after-school athletic opportunities to the Children of different communities. Watt launched the foundation in 2010. The Organization has a motto “Dream Big, Work Hard”. The foundation has raised over $1 million since then.

Watt has also visited a children’s hospital dressed up as Batman to cheer the kids in 2015. He has also raised funds and donated to the victims of Hurricane Harvey, the victims of the El Paso shooting, and the Houston Food Bank for aid relief during the COVID-19 pandemic. Watt has always been involved in humanitarian work.

JJ Watts has a height of 6 feet 5 inches and weighs around 131kg. Watt has brown hair and his eyes are blue in colour.

JJ Watt is active on most social media platforms. He has an Instagram account @jjwatt with 4.1m followers. His Twitter account @JJWatt has 5.6m followers. He also has a Facebook page named @jjwatt1  with 2m followers. Watt mostly posts about his family, friends and work-related posts.

Watt earned his wealth mostly from football and different endorsements. He earns $13 million annually without including his endorsement deals with Reebok, Ford Motor, Gatorade, and several others. He had a luxurious house in Pearland which he sold in 2016. Watt currently resides in a cozy cabin in Wisconsin. Watt’s total net worth is estimated to be around $10-25 million.