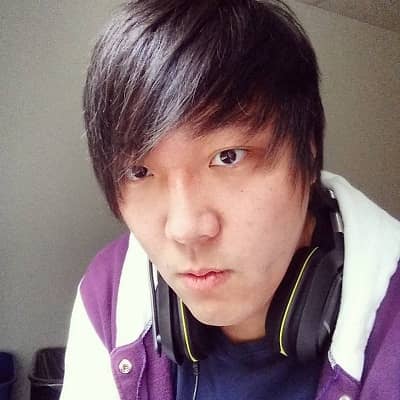 JinBop is notable for his ‘JinBop Gaming’ YouTube channel. JinBop uploaded such popular Minecraft videos as “Minecraft ULTIMATE KING OF THE TOWER” and “Minecraft Deathrun! RUN FOR YOUR DEATHS!”.

JinBop real name is Starlit Zhao, born on November 18, 1992. He is presently 29 years old and his birth sign is Scorpio. He was originally born and raised in Bellevue, Washington, USA. There is no information about his family and educational background. Caption: JinBop clicking a photo with his family, Source: Instagram

He used to record his videos in an office in Washington with Adam, Ross, Barney, Tim Tim, or TimDotTV (their editor) and Max or Mithzan (their other editor) but left the Sky Media Offices to pursue a solo career.

Jin, Adam, Ross, Barney, Nick (SGCBarbierian), and Jess(Aphmau) make roleplays and have a schedule when they will upload. One of their series is “The Crafting Dead”.

Nick started the ‘Role Play’ series in 2014 with GhettoGamer, AK, and 09Sharkboy. They met up with some people that are now in the group but some are already dead. Moreover, they met a cannibal Red (RedVacktor), which is their Rival.

They met him in Season 1 or 2. In Season 3, Nick and Ghetto met a girl named Jess and she joined their team. In Season 4 They met a guy named Barney and when they met, Nick and the others were in his house without knowing. Adam, Jin, Barney, Ross, and Nick had a pirates series. A ship from Britain lead by Captain Jin with Firstmate Sky, Deckhand Barney, and Cabin Boy Ross. Jin told Sky to work the night shift but it went into a horrible problem.

The ship crashed into an iceberg and all of the people in the ship, except them, died. They were on an island and looked for supplies to survive. They built a shelter and Jin, Sky and Barney planned to search the island for any treasure. Ross was left behind to guard the shelter.

On their trip to finding treasure, they passed by skeletons and saw a base filled with gold and skeletons.

Jin thought it was a bad idea to stare there because of the skeletons and maybe they’ll end up like that when they stay there. They got back to the shelter and saw Ross burning wood to find help.

In 2015, he became part of SkyDoesMinecraft’s company called SkyMedia. He was in many videos until Late November 2015 where he rarely appeared in any videos.

His last video on SkyVSGaming’s channel was a GTA Video. In SkyDoesMinecraft’s mail video on December 4, 2015, It was confirmed due to creative differences, he decided to leave SkyMedia and to continue on a Solo YouTube channel.

Jin had stopped uploading and his fans had been trying to contact him on social media since August 10, 2016.

Behind the scenes, Scarce and his news team got Jin’s real name, and have found the name to be in line with public court documents about his crimes and detention.

In the video Scarce also said that he and his team believe that his absence on YouTube and Twitter is due to being held in custody, detained, and in court.

Soon after, DramaAlert uploaded a video, breaking the news story on their channel, while also crediting Scarce for originally breaking it down.

After Scarce uploaded his video, multiple YouTubers gave out their opinion such as Yammy Xox, CavemanFilms, and SkyDoesMinecraft, who simply said, “Wow…”.

JinBop has a single relationship status as of now. Jin might have dated someone earlier but he has never spoken about it. Therefore, he has not shared his relationship history publicly yet. As of now, he is not dating anyone and is focusing on his career.

Jin has a good body physique. He has a height of 5 feet 7 inches tall and he weighs around 56 kilos. Moreover, he has a pair of dark brown eyes and his hair is blonde in color. There is no other information related to his body measurements. Similarly, his ‘@JinBopGaming’ YouTube channel has gained over 60.7K followers. His Twitch channel has earned over 8.96K followers. Moreover, he also has a Facebook page.

This talented YouTube personality surely pockets a decent amount of money through his profession. He has not shared his net worth, salary, and other earnings publicly.