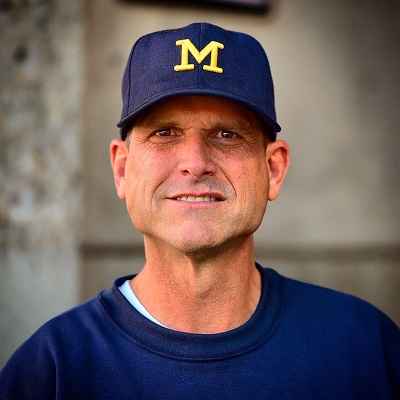 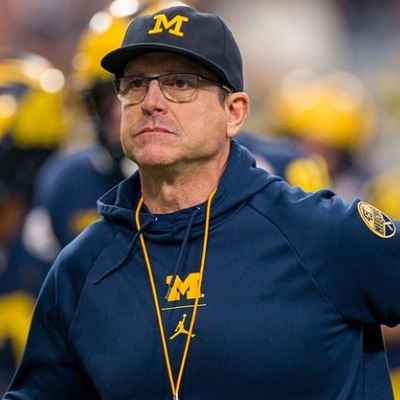 Jim Harbaugh was born on December 23, 1963, in Toledo, Ohio, USA. He is 59 years old and is under the astrological sign, Capricorn. He holds American nationality and his full name is James Joseph Harbaugh.

His father’ name is Jack Harbaugh and his mother’s name is Jacqueline M Harbaugh. And, his father was a defensive back and quarterback who also coached football at the collegiate level. On the other hand, he has two siblings and their names are John Harbaugh and Joani Harbaugh. Taking about his siblings, his brother  is an American football coach who is the head coach of the Baltimore Ravens of the National Football League and his sister is an aerobics instructor. Also, his family moved frequently as his father held assistant coaching positions at Morehead State, Bowling Green, Iowa, Michigan, Stanford, and Western Michigan.

Regarding Jim’s educational background and qualifications, he was able to play for the junior league Ann Arbor Packers and then for Tappan Junior High before moving on to Pioneer High School. He then transferred to Palo Alto High School and graduated in the year 1982. He was able to receive a Bachelor of Arts with a major in communication from the University of Michigan in 1986. 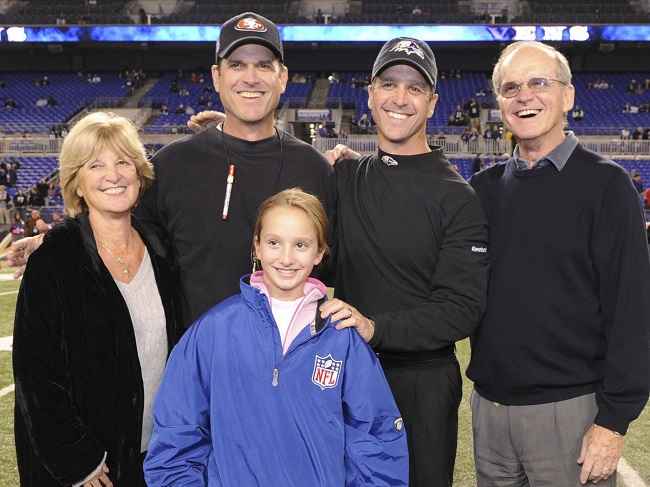 Caption: Jim Harbaugh along with his parents and siblings (Source: Baltimore Beatdown)

Jim Harbaugh committed to play football for Bo Schembechler’s Michigan Wolverines football team in the year 1982. He was the one who came to Michigan with a “high school reputation as a slick California passer”. When he was 18 years old, he was a backups to quarterback Steve Smith. He was able to perform well in the annual spring game in April 1983, completing 10 of 15 passes for 116 yards. Then, in the spring of 1984, Jim was in a three-way competition for Michigan’s starting quarterback job.

Then, in the 1984 spring game, he was able to impress observers as he completed 17 of 26 passes for 161 yards and an interception. There were games that they won as well as lost but in overall he did a good job and played good games while he was in the Wolverine. Likewise, Jim’s final season at Michigan in the year 1986, he was able to start all 13 games at quarterback for the 1986 Michigan Wolverines football team that compiled an 11–2 record. He also caused controversy when he guaranteed a victory over Ohio State in 1986 but his guarantee proved valid as the Wolverines defeated the Buckeyes.

Moreover, Harbaugh was able to win numerous honors in 1986 such as the Chicago Tribune Silver Football trophy and finished third in the Heisman Trophy. Also, the Associated Press (AP) and United Press International (UPI) selected him as the first-team quarterback on the 1986 All-Big Ten Conference football team. He also became popular as the Big Ten’s All-Academic team.

Jim Harbaugh went on to be selected by the Chicago Bears in the first round of the 1987 NFL Draft. He was able to play 10 games in 1988 and completed 47 of 97 passes (48.5%) for 514 yards and 2 interceptions. He then was able to start his first game on Week 14. Then, in the following game, he was able to earn his first win as an NFL starter with a 13–12 victory over the Detroit Lions.

He got to play more in 1989 after Jim McMahon left the team and began five games for Chicago while Mike Tomczak started 11 in a 6–10 season for Chicago. Then, in 1990 season, he was able to play and start in the first 14 games of the season. Likewise, in 1991 season, he went on to pass for a career-high 3,121 yards with Chicago and became the first Chicago quarterback since Vince Evans to start all 16 regular season games.

Moreover, in the year 1994, Jim Harbaugh went on to sign with the Indianapolis Colts. He was able to play and start in just nine games in the 1994 Colts season. Then in the next year, he was able to achieve career highs in completion percentage (63.7%), passer rating (100.7), and touchdown passes (17). He even led Indianapolis to the AFC Championship Game. The Indianapolis Colts went on to play seasons in 1195, 1996, and 1997 along with Jim Harbaugh where they won as well as lost.

Then, in the year 1998, the Indianapolis Colts traded Jim Harbaugh to the Baltimore Ravens for third-round and fourth-round draft picks in the 1998 NFL Draft. During that season with Baltimore, he was able to play in 14 games and began 12, with a 5–7 record as starter in a 6–10 season for the Ravens. Jim Harbaugh also went on to play for the Baltimore Ravens and San Diego Chargers, both of which was professional football team in their respective places.

He then went on to sign with the Detroit Lions prior to the 2001 season, where he was expected to back up incumbent starter Charlie Batch. But the Lions cut him and traded for Ty Detmer so, he closed out his NFL career with the Carolina Panthers in 2001. Moreover, for his NFL career, he was able to play in 177 league games with 140 starts and completed 2,305 of 3,918 passes for 26,288 yards with 129 touchdowns.

Jim Harbaugh was an NCAA-certified unpaid assistant coach under his father Jack Harbaugh at Western Kentucky University (WKU) during his final eight seasons in the NFL. He was able to scout and recruit high school student-athletes throughout several states including Florida, Indiana and Illinois. He also was quarterback coach for the Oakland Raiders in 2002 and 2003 under Bill Callahan. And, prior to the 2004 season, he became the head football coach at the University of San Diego. He also was a head coach at Stanford University in December 2006.

Likewise, he also stirred some intra-conference controversy in March 2007, when he was quoted as saying rival USC head coach “Pete Carroll’s only got one more year, though. He’ll be there one more year. That’s what I’ve heard. I heard it inside the staff”. Then, further investigation and questions were done and Jim claimed he had heard it from staff at USC. This definitely caused a rebuke from Carroll. Moreover, the 2010 season brought more success for Jim Harbaugh as well as the Cardinal. The team was able to go 11–1 in the regular season, with their only loss coming from Oregon, a team that was undefeated and earned a berth in the BCS National Championship Game.

Then, in January 2011, Jim agreed to a five-year, $25 million contract to become the head coach for the San Francisco 49ers. His work in San Francisco had resulted in an extremely successful season, revitalizing the career of quarterback Alex Smith and with defensive coordinator Vic Fangio creating one of the leading defensive squads of the 2011 season. 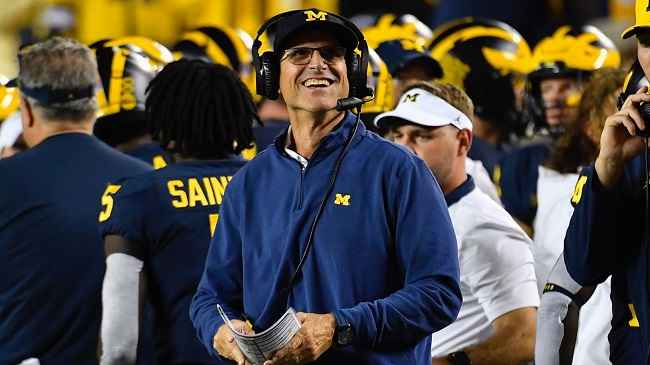 Also, in the 2012 season, he was able to resolve a quarterback controversy by replacing incumbent starter Alex Smith with backup Colin Kaepernick. He even led the team to an 11–4–1 record in the regular season, winning back to back NFC West titles. Ans, his quarterback decision was on display in the first game of the playoffs.

Jim Harbaugh was able to lead the 49ers to a 12–4 regular-season record and a third consecutive appearance in both the playoffs and NFC Championship Game. And, in doing so, he was able to become the first NFL head coach to reach a conference championship game in each of his first three seasons. Then, in 2014 season, he left the 49ers as one of their most successful head coaches in just four years, as well as becoming the first successful NFL head coach to depart for a college team. He went on to become the school’s new head football coach in 2014 in the University of Michigan.

Unfortunately, he lost his first game as head coach of Michigan, a 24–17 road loss against Utah in the year 2015. But on September of that same year, Michigan was able to win 35–7, against Oregon State, which gave Jim his first win as Michigan’s head coach. The in 2016 season, Michigan ranked No.5 in the AP poll and this had a huge impact on Harbaugh’s career as well. Overall, Michigan went on to play 2017, 2018, 2019, 2020, 2021, and 2022 season as well. They definitely won some of the match but there were matches where they lost as well. And, all this time, Jim Harbaugh was the on who coached them. Also, in January 2021, Michigan signed Harbaugh to a four-year contract extension through the 2025 season.

Jim Harbaugh was able to appear as a cowboy in the Western/science fiction show “The Adventures of Brisco County, Jr.” in the year 1994. He even was able to make an appearance on the popular TV show “Saved by the Bell” in 1996, in which he played the cousin of the character Screech. Moreover, he was the co-owner of Panther Racing in the IndyCar Series and the main car for the team carried Harbaugh’s old jersey number, 4.

Likewise, on October 30, 2005, Jim was arrested for DUI after running a stop sign in Encinitas, California. Initially, he pleaded not guilty, but later entered into a plea deal. Then, he pleaded guilty to a charge of reckless driving and was sentenced to three years of probation, a $1,300 fine and a drunken-driving educational program. The San Diego Union-Tribune reports his blood-alcohol level was .09. Also, in November 2012, Harbaugh had a cardioversion procedure to correct an arrhythmia.

The duo has two sons and one daughter and their names are Jay, James and Grace. Moreover, he is a Roman Catholic who has done charity work in Piura, Peru. 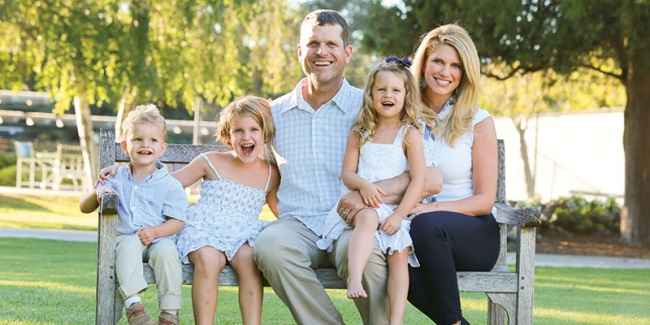 Jim Harbaugh is pretty active on all o his social accounts. He owns his Instagram account under the name “coachjim4um” and has garnered 68.2K followers on it. Likewise, his Twitter handle is under the name “CoachJim4UM” and has 1.9 million followers until now. He also owns a Facebook account which has accumulated 9.4K followers to date.

According to celebritynetworth, Jim Harbaugh has a net worth of $35 million and his main income source must be his football career and coaching career as well.