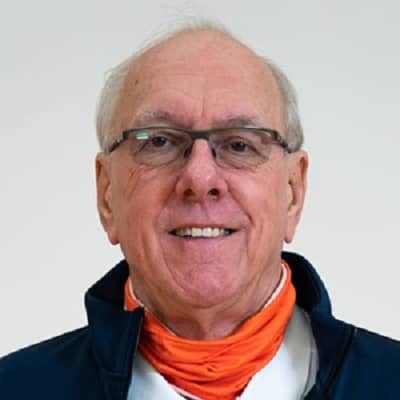 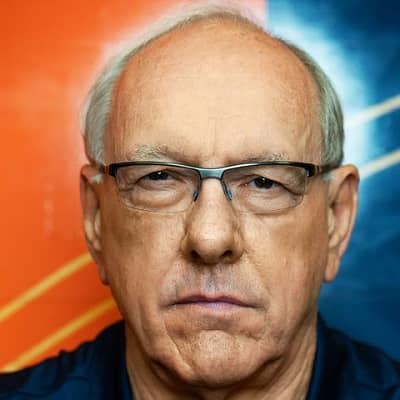 Jim Boeheim is a well-known college basketball coach from the United States. Jim Boeheim is best known as the head coach of the Syracuse Orange men’s team coach.

Jim Boeheim was born James Arthur Boeheim on 17th November 1944. He stepped into this world in Lyons, New York, United States. By this, he is currently 77 years old and American by nationality. Similarly, he follows Christianity and his zodiac sign is Scorpio.

Moving on towards his family members, he was born to his father Jim Boeheim Sr., and his mother Janet Boeheim. Similarly, he also has a sister named Barbara Boeheim. In addition, Buddy, Jimmy, and James are his nephews while Jamie and Elizebth are his nieces. He had a wonderful childhood with his family.

Talking about his educational status, he completed his schooling at Lyons Central High School. After that, he joined Syracuse University as a student in 1962. From here, he graduated with a Bachelor’s degree in social science.

Boeheim played professionally with the Scranton Miners of the Eastern Professional Basketball League after graduating from Syracuse, where he won two titles and was a second-team all-star (SU Athletics).

In 1969, Boeheim chose to pursue a career as a basketball coach and accepted a position as a graduate assistant at Syracuse University under Roy Danforth. Soon after, he was elevated to full-time assistant coach and was part of the coaching team that guided the Orangemen to their first NCAA Tournament trip in 1975, when they reached the Final Four.

Danforth departed in 1976 to become Tulane University’s head basketball coach and athletic director. He was then elevated to the position of head coach. Boeheim was offered the head coaching position at Ohio State in 1986, but he declined to stay at Syracuse. Boeheim has led Syracuse to postseason appearances in each of his 42 seasons as head coach. Syracuse has only missed the playoffs once, in 1993.

Boeheim has been voted Big East Coach of the Year four times and National Association of Basketball Coaches District II Coach of the Year ten times. Boeheim got two more prizes in 2004. The first was when he received the Clair Bee Award in appreciation of his achievements to the sport of basketball in the spring. Boeheim received Syracuse University’s Arents Award, the university’s highest alumni distinction, in the fall of the same year.

Moving on, he was dismissed for the first time in his career in an exhibition game against Division II school Saint Rose from Albany, New York, on November 7, 2005, after challenging a call late in the first half of the Orange’s 86–73 victory. 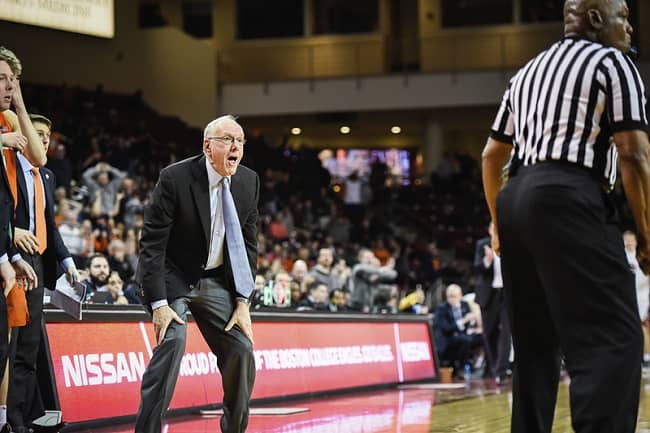 Furthermore, he guided Syracuse to its first Final Four berth since winning the NCAA National Championship in 2003 in the 2012–13 season. The Orange were defeated by Michigan 61–56. He guided the Orange to the NCAA Tournament in 2013–14, but they were defeated in the third round by the Dayton Flyers.

After missing the 2015 tournament due to a self-imposed postseason ban, Boeheim guided Syracuse to another unexpected Final Four appearance in the 2015–16 season. This includes a 15-point comeback against the Virginia Cavaliers, who were seeded first. North Carolina defeated the squad 83–66.

Syracuse began the next season ranked 19th in the AP Poll, but failed to qualify for the NCAA tournament. Despite finishing 8–10 in league play, Syracuse would return to the NCAA tournament in 2017–18. Syracuse beat Duke in Cameron Indoor Stadium on January 14, 2019, marking the Blue Devils’ first home loss to an unranked club.

Syracuse got off to a rough start in the 2019–20 season, losing 48–34 against Virginia, the lowest point total in Boeheim’s history. SU defeated North Carolina 81–53 in the ACC Tournament to win its last game of the season and upset the Tar Heels for the first time since 2014. Due to COVID-19/, this would be the final game. In the 2020–21 season, Syracuse would upset 3-seeded West Virginia in the Sweet 16 before succumbing to eventual Final Four member Houston.

Boeheim has already said that he will step down in April of this year. He extended his contract beyond the 2017–18 season in 2017, after his son Buddy committed to play at Syracuse beginning in 2018.

Being a successful coach for years, he had made a huge amount of money. As of the online resources, he has an estimated net worth of $12 million US dollars.

Jim is currently in a married relationship with Juli Boeheim. Juli is a businesswoman. They met each other for the first time in 1994 at a mutual friend’s party. Then, they started dating in 1995. After two years, the couple married each other on 10th October 1997. Despite the age gap of 20 years, they are enjoying each other’s company. Together, they have three children named Jackson, Jimmy, and Jaime. Before this, he married Elaine Boehim in 1976 and they divorced in 1994. 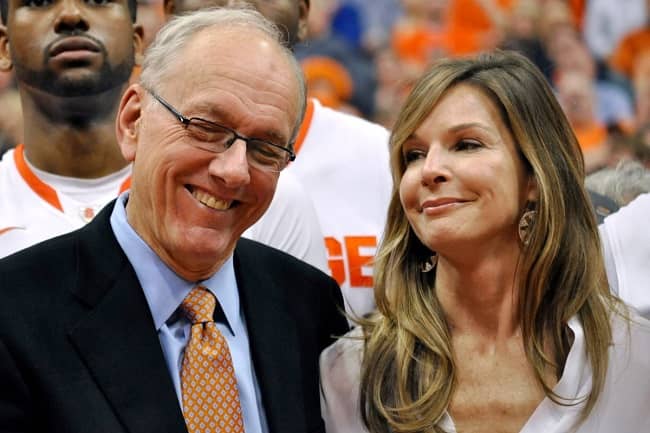 Enhancing his body measurements, he stands tall at a height of 6 feet 4 inches or 1.93 meters and weighs around 91 kg or 200 pounds. His other body physiques are not available. In addition, the coach has few white hairs left and a pair of brown eyes. 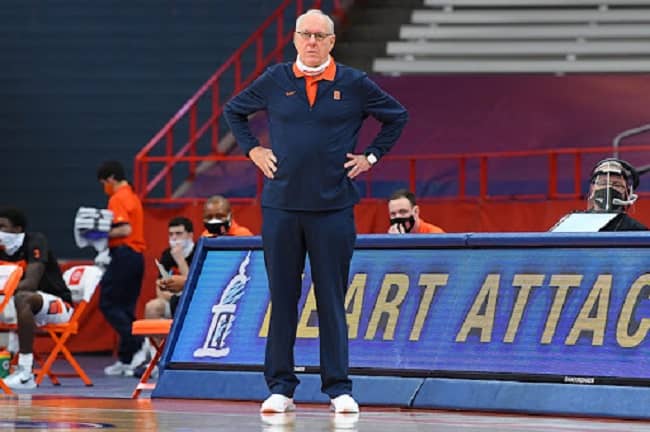 When it comes to his social media handles, he is only active on Twitter with over 100k followers.