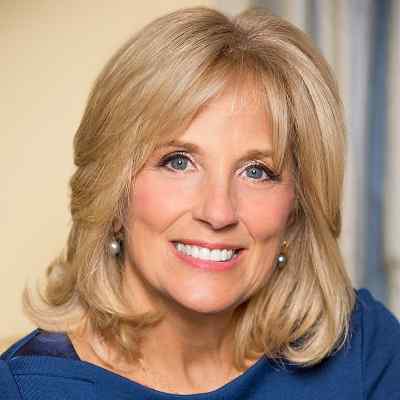 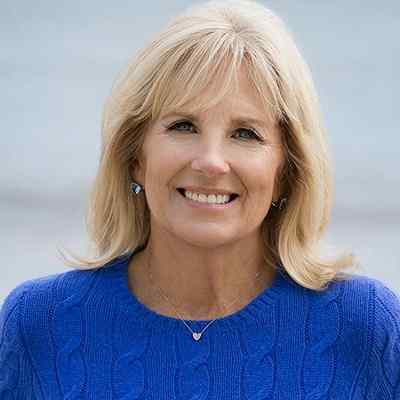 Jill Biden is the Delaware educator and wife of Obama’s vice president Joe Biden who is the 46th US Vice President. And, apart from being the Second Lady of the United States, she works as a professor of English at Northern Virginia Community College. Likewise, she has also done important work advocating for the rights of military families.

Jill Biden was born on June 3, 1951, in Hammonton, New Jersey, USA. She is 69 years old and her astrological sign is Gemini. She holds American nationality. Likewise, her real name is Jill Tracy Jacobs Biden.

Her father’s name is Donald C. Jacobs and her mother’s name is Bonny Jean Jacobs. Likewise, she has four younger sisters, and their names Jan, Bonny, Kelly, and Kim. They spent most of their childhood in Willow Grove, Pennsylvania, a northern suburb of Philadelphia.

Her father was a bank teller and U.S. Navy signalman during World War II who then used the G.I. Bill to attend business school and became head of a savings and loan institution in the Chestnut Hill neighborhood of Philadelphia. Moreover, her mother was a homemaker and was of English and Scottish descent. Furthermore, Jacobs always intended to have her own career and she began working at age 15, which included waitressing in Ocean City, New Jersey.

Jill Biden attended Upper Moreland High School. She then enrolled in Brandywine Junior College in Pennsylvania for one semester. Jill intended to study fashion merchandising but found it unsatisfying. Then, she switched her enrollment to the University of Delaware, in its College of Arts and Sciences, where she declared English as her major. Likewise, she then took a year off from college and did some modeling work for a local agency in Wilmington.

Moreover, Jill Biden graduated with a Bachelor of Arts, in English, from the University of Delaware in the year 1975. And then, she started her career being employed as a substitute teacher in the Wilmington school system, then taught high school English full-time for a year at St. Mark’s High School in Wilmington. Likewise, Jill continued to teach and worked on a master’s degree at West Chester State College, taking one course per semester.

In the year 1987, Jill Biden received her second graduate degree, this one a Master of Arts in English from Villanova University. She also taught at Claymont High School and at Brandywine High School in Wilmington. She was an instructor at the Stanton/Wilmington campus of Delaware Technical & Community College as well. Furthermore, she later also received a Doctor of Education (Ed.D.) in educational leadership from the University of Delaware.

Jill Biden was also into politics as her husband was in it as well. Likewise, she had not wanted her husband to run in the 2004 presidential election, but following George W. Bush’s reelection in the same year, she urged her husband to run again for president. During her husband’s campaign and election times, she continued to teach during the week and would join him for campaigning on weekends. Moreover, throughout the time her husband was running for vice president, Jill Biden continued to teach four days a week at Delaware Technical & Community College during the fall 2008 semester and then campaigned over the long weekend, while grading class papers on the campaign bus.

Second Lady of the United States

Despite moving to Number One Observatory Circle as Second Lady of the United States, Jill Biden intended to keep teaching at a Washington-area community college, and several of them recruited her. Likewise, she was the first second lady to hold a paying job while her husband was vice president. Moreover, in April 2011, she along with Michelle Obama founded a national initiative, Joining Forces, to showcase the needs of U.S. military families.

Jill continued to teach at NOVA, and by the year 2011 held a permanent position as an associate professor, teaching three English and writing composition courses two days per week. Likewise, her life with her husband at Number One Observatory Circle tended towards the informal and was centered around family and their nearby grandchildren. Moreover, in June 2012, Biden published a children’s book, Don’t Forget, God: Bless Our Troops, based around her stepson Beau’s deployment. 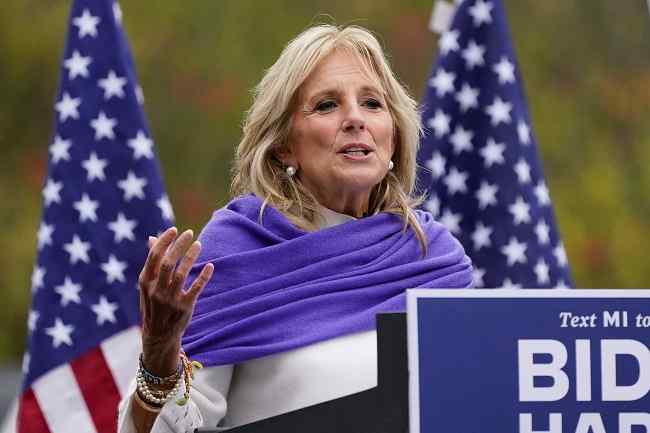 In the 2012 U.S. presidential election, in which her husband was running for re-election as vice president, Jill Biden played a modest role. However, she did not cut back on her teaching schedule and made few solo campaign appearances. And this reflected her continuing distaste for both politics and public speaking.

During her second term, Jill Biden continued to be involved with supporting military personnel, including staging multiple visits to the Center for the Intrepid rehabilitation facility for amputees and attending the inaugural Invictus Games in London. And, during the 2014 U.S. midterm Congressional elections, she campaigned for a number of Democrats, including someones in high-profile contests such as Mark Udall in Colorado and Michelle Nunn in Georgia.

The former second couple launched the Biden Foundation in February 2017, with the purpose of allowing them to pursue the causes they cared most about, including focuses upon preventing violence against women, his moonshot initiative, and her interests in community colleges and military families. Likewise, the couple also substantially increased their charitable giving during this period.

Moreover, in May 2019, Biden’s memoir Where the Light Enters: Building a Family, Discovering Myself was published and the book has little political content, instead of focusing on aspects of the family.

Regarding the much-discussed possibility of Jill Biden’s husband running in the 2020 United States presidential election, she was a key participant in his decision-making process. However, she continued to teach at NOVA during 2019 and she staged appearances without her husband in early contest states such as Iowa, in some cases accompanied by a granddaughter.

Jill Biden played a more active role in this presidential campaign than she had in her husband’s two prior ones,[21] and for the first time, she reluctantly took a leave of absence from NOVA for the spring 2020 semester, so that she could be on the campaign trail full-time. Likewise, in the weeks leading up to the Iowa caucuses, she sometimes staged more campaign appearances in that state than her husband did.

Moreover, with her husband has become the presumptive Democratic nominee, in June 2020 she published the children’s book Joey: The Story of Joe Biden, which portrayed him as having been “brave and adventurous” as a child despite having a stutter that he was bullied for.

Related to the Covid-19 pandemic, in July 2020, she spoke out about the impact of the pandemic on education, appearing in a video with her husband to emphasize that she understood the frustrations that children, parents, and teachers were having with virtual education substitutes but saying that “Schools and parents alike want a clear, science-based strategy, not mixed messages and ultimatums”. She criticized U.S. Secretary of Education Betsy DeVos for what she saw as political motivations in advocating a reopening of schools no matter what.

Jill Biden was heavily involved in the vice-presidential selection process as well which resulted in Senator Kamala D. Harris being chosen. 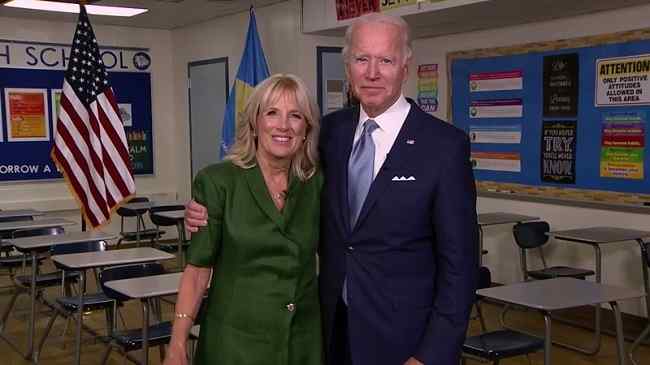 Jill Biden married Bill Stevenson who was a former college football player, in February 1970. She then became known as Jill Stevenson. However, they were together for almost 4 years and then separated in 1974. The reason for their divorce as she took a year off from college and did some modeling work for a local agency in Wilmington. because of this, she was really busy and was not able to give time to her husband, and slowly, they fell out of love.

She then met Senator Joe Biden in March 1975. They met each other on a blind date set up by Joe’s brother Frank. Although he was nearly nine years her senior, she was impressed by his more formal appearance and manners compared to the college men. The couple married on June 17, 1977, at the Chapel at the United Nations in New York City. It was four and a half years after his first wife and infant daughter died in a motor vehicle accident.

However, at first, Jill was hesitant to take on the commitment of raising his two young sons and was wary of entering the public spotlight. Then, she raised Beau and Hunter, and they called her Mom, although she did not legally adopt them, she considers them her children. Moreover, Jill and Joe Biden are blessed with a daughter and her name is Ashley. 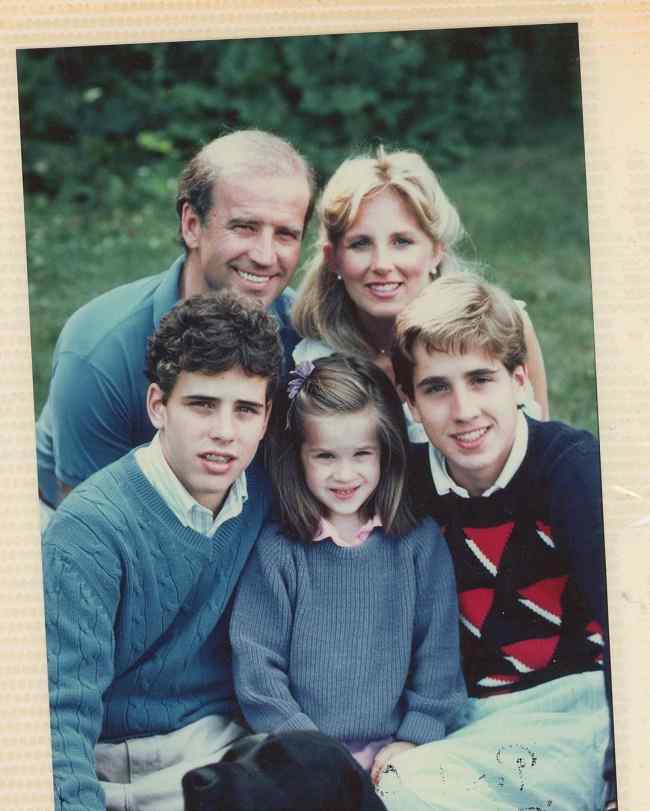 Caption: Jill Biden along with her husband and three children (Source: Instagram)

Jill Biden has a height of 5 feet 7 inches and her weight is 63 Kg. Her other body measurements such as her chest size, waist size, and hip size, are 35-25-35 inches respectively. Moreover, she has blonde hair and blue eyes.