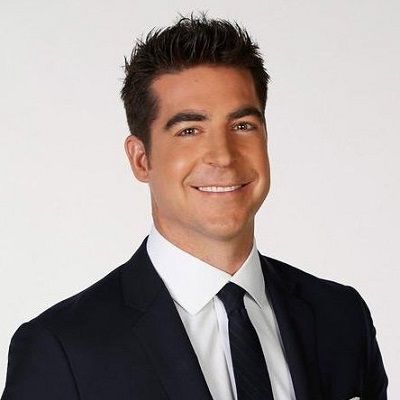 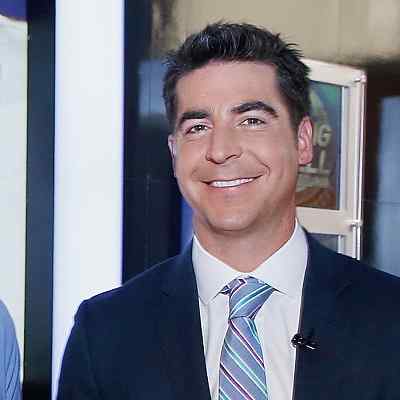 Jesse Watters is an American TV Show Host. Jesse Watters is famous for his Watters World interview segment of the Fox News program The O’Reilly Factor. He is also popular for his work on the Fox News talk shows “Outnumbered” and “The Five”. Likewise, he joined the network in 2002 as a production assistant.

Jesse Watters was born in Philadelphia, Pennsylvania, USA, on July 9, 1978. He is 43 years old and is under the birth sign, Cancer. He holds American nationality. His father’s name is Stephen Watters and his mother’s name is Anne Purvis Watters.

Likewise, he also has a sister but her name is not available. Other than this, no information about any other family members is available at the moment. 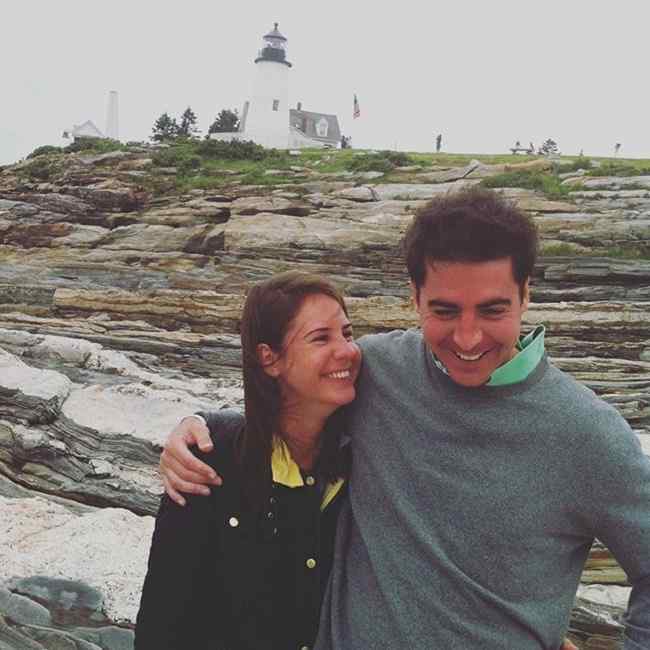 Regarding his educational background and qualification, he attended the William Penn Charter School through his junior year. Then, he moved with his family to Long Island in New York.

Likewise, in the year 2001, he graduated from Trinity College in Hartford, Connecticut, with a B.A. in history.

He has drawn criticism for numerous provocative and inaccurate statements. On the twelfth anniversary of the September 11 terror attacks, he stated on Fox News’ O’Reilly Factor that when acts of domestic terrorism are committed, “It is always a Muslim”.

Likewise, in January 2017, he faulted John Podesta, Hillary Clinton’s campaign manager, for the theft of Podesta’s emails by Russian hackers, saying, “What happened was John Podesta gave his password to a hacker.

According to Media Matters, on climate change, he has even stated that “You can fight climate change with suntan lotion. It’s not that big of a deal.”

Regarding President Trump’s policy of separating children from their families, he has said that “some would say it’s a more humane policy” than keeping them together.

Moreover, according to an article by Michael Houltt on The Business Standard News, he quoted, “Just imagine how well KFC and marijuana dispensaries will do in black communities,” on the Fox show The Five.

In the year  2009, on assignment for The O’Reilly Factor, he along with his cameraman accosted journalist Amanda Terkel. She was on vacation and they approached her to ask questions about an article she wrote that was critical of Bill O’Reilly.

Seven years later, at a journalists’ reception, The Huffington Post’s Ryan Grim approached him along with his phone camera running and asked him to walk over to Terkel and apologize.

Moreover, the video of the incident shows him then grabbing Grim’s phone and throwing it on the floor, and later grabbing it again and putting it in his pocket.

And then, the two of them got into a shoving match, as Grim attempted to recover his phone. He later commented on the incident on The O’Reilly Factor, stating, “I was at this party trying to enjoy myself. This guy came up to me. He starts putting it in my face”.

Terkel wrote that his response was surprising, considering that his way of confronting his subjects is to thrust cameras in their faces unexpectedly and pepper them with aggressive questions.

In October 2016, he was criticized for a segment of Watters’ World that was widely considered racist toward Asian Americans.

In New York City’s Chinatown, he asked Chinese Americans if they knew karate and if he should bow before he greets them, or if their watches were stolen. Throughout the segment, the 1974 song “Kung Fu Fighting” plays in the background.

And the interviews are interspersed with references to martial arts and clips of Watters getting a foot massage and playing with nunchucks.

This segment was also criticized by the Asian American Journalists Association, which issued a statement saying: “We should be far beyond tired, racist stereotypes and targeting an ethnic group for humiliation and objectification on the basis of their race”.

On October 5, he tweeted what Variety’s Will Thorne called a “non-apology” about the segment.

In the two tweets, he stated: “My man-on-the-street interviews are meant to be taken as tongue-in-cheek and I regret if anyone found offense and as a political humorist, the Chinatown segment was intended to be a light piece, as all Watters’ World segments are”.

Two days after joining The Five as co-host, Watters made an on-air comment about Ivanka Trump that was criticized as lewd in April 2017.

Then, after viewing footage of Trump speaking on a panel about female entrepreneurship, he again commented, “So I don’t really get what’s going on here, but I really liked how she was speaking into that microphone”. He even parodied holding the microphone as a phallic symbol.

Furthermore, he denied his comment was sexual, saying in a statement,

“During the break, we were commenting on Ivanka’s voice and how it was low and steady and resonates like a smooth jazz radio DJ and this was in no way a joke about anything else”.

And in response to the criticism, he was not on the show for two days that week.

After graduating from college, Jesse Watters began working as a production assistant at Fox News. Then in the year 2003, he moved to the production staff of The O’Reilly Factor. Likewise, in 2004 he began to appear on air in segments of O’Reilly’s show.

On June 11, 2014, he debuted on the Fox News show Outnumbered. He occasionally appears as a guest co-host in the show. And, on November 20, 2015, Watters debuted his own monthly Fox News program, Watters’ World.

He is also popular as an “ambush journalist”. Also, he has said, “I try to make it enjoyable for the person I’m interviewing.

We always come away from the interview all smiles, for the most part, and it’s always fun to come back and look at the footage and say, ‘Oh my gosh, what just happened?'”.

Moreover, in January 2017, “Watters’ World” became a weekly show. It began airing every Saturday at 8 p.m. EDT. Then in April 2017, he even became a co-host of the roundtable series “The Five”.

Also, he takes on compelling guests and top newsmakers with his original style and fun personality on “Watter’s World”. Then, recently in March 2017, he aired an exclusive interview with President Donald Trump aboard Air Force One as well.

He is part of a roundtable ensemble of FNC personalities on “The Five”. They discuss, debate, and even debunk the hot news stories, controversies, and issues of the day.

Furthermore, in the year 2003, he made his on-camera debut as a correspondent for “The O’Reilly Factor”.

While he was working with the program, he showcased his popular man-on-the-street interviews. By traveling to different locations while quizzing individuals about politics, pop culture, and current events. 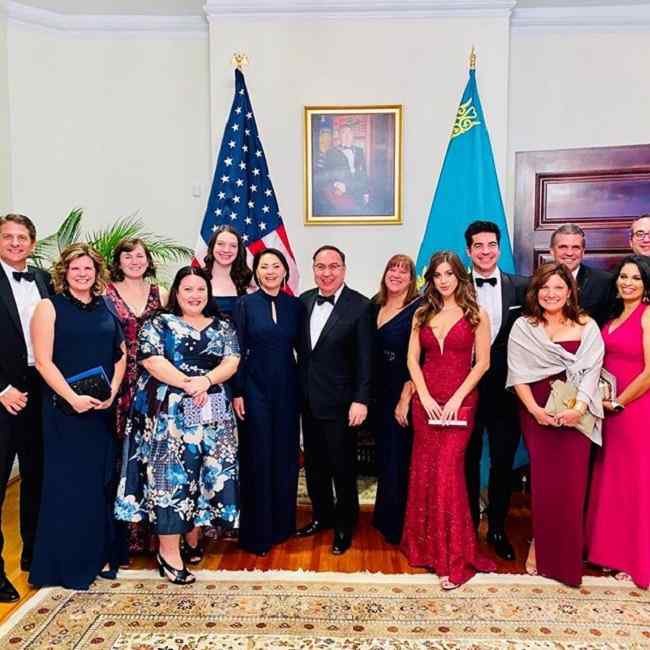 The body measurements of Jesse Watters such as height, weight, chest size, hip size, waist size, and many other sizes are not available at the moment. However, he has got black hair and dark brown eyes.

Jesse Watters has an ex-wife. Her name is Noelle Inguagiato Watters. They are parents to twin girls and their names are Sophie and Ellie Watters. However, according to news accounts published in March 2018, Noelle Watters filed for divorce in October 2017.

Because she learned about her husband having an affair with Emma DiGiovine.

Emma is a 25-year-old producer working on his show. Likewise, Watters informed the network of his relationship shortly after Noelle filed divorce papers. Then, DiGiovine transferred to The Ingraham Angle.

Moreover, Emma and Watters continued to date. And they announced their engagement to DiGiovine in August 2019. Also, they married in the same year. 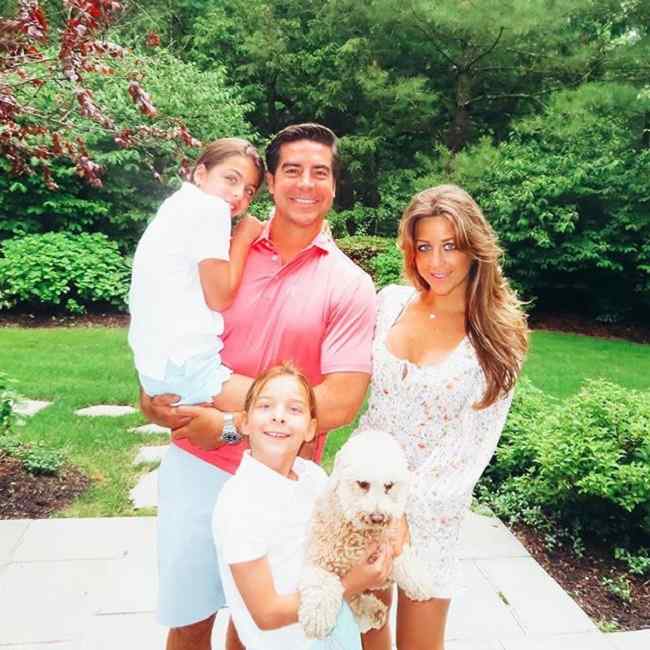 Caption: Jesse Watters along with his wife, Emma and his two twin daughters (Source: Instagram)

Talking about his earning, according to celebritynetworth, he has a net worth of $5 million respectively. His main income source is his hosting career.