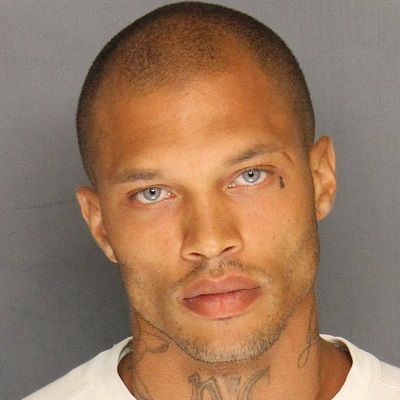 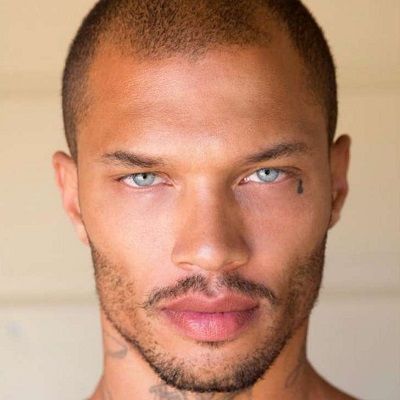 Jeremy Meeks is an Instagram star and an American model. Jeremy Meeks gained attention for his model-like looks. It happened when his mugshot went viral when he was in prison.

Jeremy Meeks was born on February 7, 1984, in his birthplace, Stockton, California. As of 2022, his age is 38 years old and his birth sign is Aquarius. His full birth name is Jeremy Ray Meeks and he holds American nationality.

Jeremy’s ethnicity holds mixed ethnicity (French, Scottish, and African-American) and follows the Christian religion. His mother’s name is Katherine Angier and his Father’s name is Ray Meeks. Likewise, he has a brother named Emery Meeks and an unnamed sister.

Talking about his education, Jeremy Meeks is a school dropout. He dropped out of school because he was arrested by the police at 18 years old. Moreover, his spouse Chloe Green, sent him to finish off his schooling. 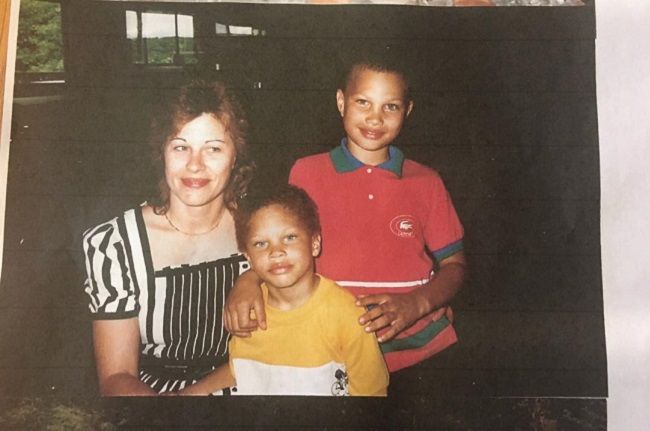 Life as a Heroin baby

Jeremy’s childhood was very dark and not good. His mother was addicted to heroin when he was born and his father was arrested for murdering his mother’s best friend.

His father was also charged with abducting and raping another woman but his father denied the kidnapping charge.

Both of his parents were heroin-addicted so, he was a heroin baby meaning that he was born dependent on heroin as his mother was using it while she was pregnant. It was very difficult to grow up in that household for him as he had to take care of himself from an early age.

Jeremy was charged with robbery and violently assaulting a 16-year-old boy when he was 18 years old. He was sentenced to serve two years in a California prison after taking a plea deal.

From prison to modeling

Jeremy served a two-year sentence back in 2002 for a felony, grand theft, and assaulting a boy. He was again arrested in June 2004 during a gang sweep in Stockton, California.

His mugshot went viral shortly after it was posted to the Facebook page of the Stockton Police Department. It gained a lot of likes and comments and was also featured in several news outlets released in March 2016.

Furthermore, he is a Heroin baby meaning that he was born with a dependency on this particular drug since his mother was addicted to heroin. At present, his addiction doesn’t define him, but rather his success as a model is what defines him.

Meeks then began his modeling career in 2016 soon after his release from prison. He made his runway debut during New York Fashion Week in 2017. He even walked for German fashion designer Philipp Plein.

Jeremy Meeks is managed by Jim Jordan of White Cross Management. He starred in a commercial for FashionNova Men and also made an appearance in Olga Buzova’s “WiFi” music video.

He has walked for Milan Fashion Week as well. Meeks posts regularly to his millions of followers on Instagram. Apart from their modeling career, in 2018, he made an appearance in the music video Wi-Fi by Russian pop singer Olga Buzova.

In mid-2019, he started working on launching his fashion label. He signed a contract with the German firm ‘Fashion Concept GmbH.’ Likewise, he became the first exit to showcase the fall 2020 collection of the streetwear brand ‘Extremely’ at the ‘Milan Fashion Week.’

Further, he has also expressed interest in making music. Reportedly, he even has offers to star on reality TV shows. 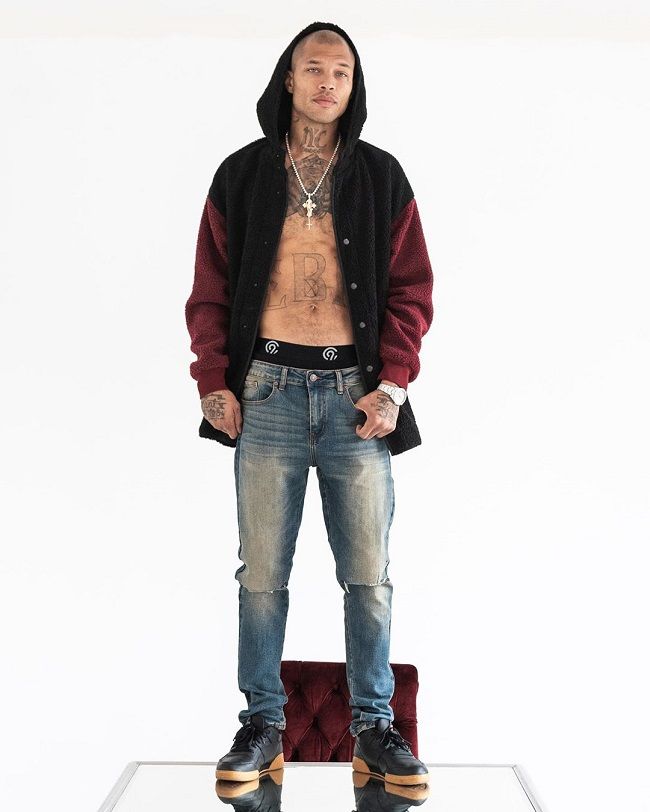 Caption: Jeremy Meeks during a photoshoot for FashionNova (Source: Instagram)

Reflecting on Jeremy Meeks’s relationship status, he is a probably single man. He dated Melissa for about a year before marriage. The pair met each other in 2007. Jeremy married in 2008. They were blessed with a son named Jeremy Meeks Jr.

Their marriage of 9 years ended when the picture of Jeremy and British Topshop heiress Chloe Green kissing went viral. Then, Meeks was in a relationship with Chloe Green and they got engaged but have no plan of marrying till now.

They welcomed their first son together, Jayden Meeks-Green, in 2018. Similarly, his then-wife, Chloe is the daughter of Sir Philip Green and the billionaire heiress to the ‘Arcadia Group’ which owns brands such as ‘Topman,’ ‘Topshop,’ and ‘Evans.’

As reported, in August 2019,  Meeks and Chloe separated. In early 2020, the media captured him with an unknown woman more than once, giving rise to rumors that he might be in a new relationship. 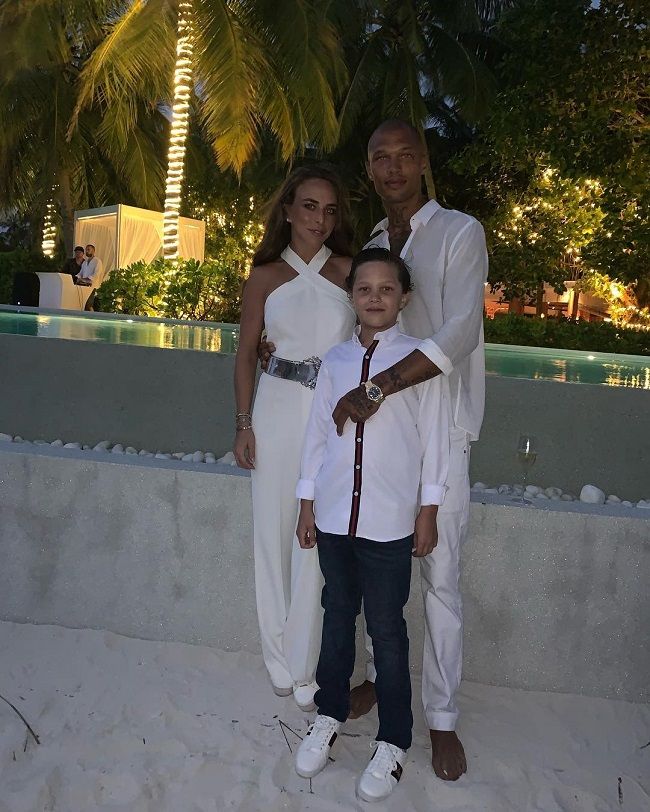 Jeremy has another son from his past relationship named Robert Meeks. Sadly, he has not mentioned his son’s mother.

Jeremy spoke about his very dark childhood with his heroin-addicted mom and rapist-murderer dad in an interview. He stated that his older sister looked after him. His sister left the house to join the military when she was 18 years old.

Eventually, she returned after 2 years and legally adopted him and his brother, and looked after them. Unfortunately, he never mentioned his sister’s name in the interview and on any other platform as well.

Jeremy Meeks’s height is 6 feet 1 inch whereas his weight is 75 kg. His body measurements such as chest-waist-biceps are 42-32-16 inches respectively. Moreover, he has brown hair and blue-grey eyes.

Jeremy Meeks has neither received any awards nor been nominated. However, he has appeared on award shows like Princess Grace Awards Gala in 2017.