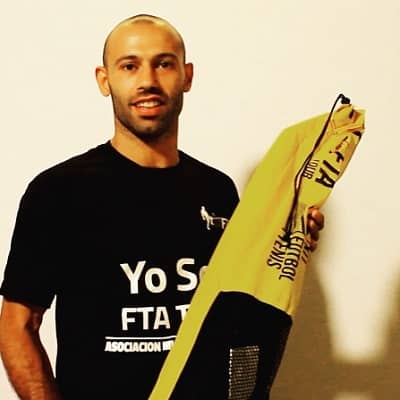 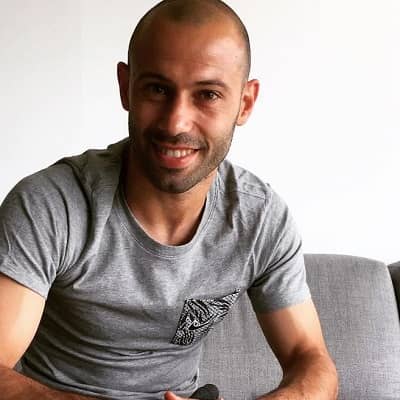 Javier Mascherano is a former Argentine footballer who played as a central midfielder or center-back. Javier Mascherano began his football career with River Plate’s youth team. There he won his first senior honors in the Argentine Primera Division in 2003-04. Similarly, in 2005, he joined the Brazilian club Corinthians, where he won the Brazilian Serie A in his first season.

On June 8, 1984, Javier Mascherano was born in San Lorenzo, Argentina. As of the year now, he is currently, 37 years old. Javier Alejandro Mascherano is his given name. Similarly, he was born to Oscar Mascherano and Teodolinda Chiche Tagliaro Mascherano and grew up with his brother, Sebastian Mascherano. He is of Argentine origin. His faith is Christianity. Moreover, Gemini is his astrological symbol. 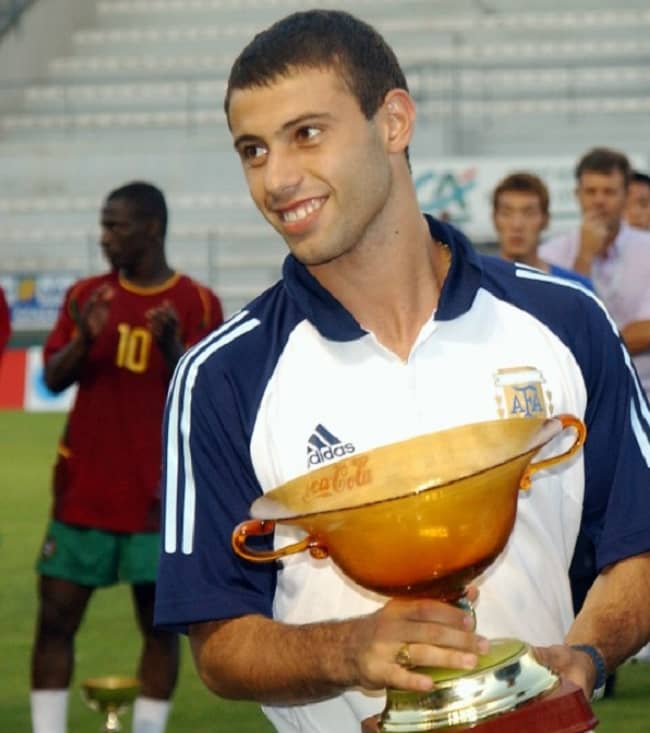 Moving towards his career, Javier Mascherano began his football career with River Plate’s youth team, where he won his first senior honors in the Argentine Primera Division in 2003-04. He made 46 appearances for the club between 2003 and 2005. Similarly, he transferred to Brazilian club Corinthians for $15 million in 2005, where he claimed the Brazilian Serie A in his first season. He made 46 appearances for the club between 2005 and 2006. In 2006, he moved to Europe, signing with Premier League club West Ham United for an undisclosed fee. However, his stay was cut short due to delays in the transition procedures.

He joined Liverpool on loan in early 2007, where he played a vital role in leading them to the Champions League Final that season and signed a permanent contract with the club for £18.6 million. With a 20-yard shot against Reading on March 15, 2008, he scored his first Premier League and Liverpool goal. Likewise, on March 23, 2008, in his first game at Old Trafford against Manchester United. There he was sent off after getting two yellow cards in a row. He was hesitant to leave the pitch and had to be escorted out. For his inappropriate conduct, the Football Association banned him for three matches and fined him £15,000.

In a 2-1 victory over Manchester United at Anfield on September 13, 2008, he was named Man of the Match by the supporters on Liverpool’s official website. From 2007 to 2010, he appeared in 94 games for the club and scored one goal. After three years with Liverpool, he moved to Barcelona in 2010 for €24 million, where he moved from defensive midfielder to full central defender. Similarly, on 11 September 2010, he made his league debut, starting in a 0-2 home loss to newly-promoted Hercules, the first defeat at the Camp Nou in 16 months. In his second season, he played almost entirely as a center-back, turning in consistent defensive performances and starting on a regular basis for the club.

Likewise, he signed a contract extension with Barcelona on July 26, 2012, keeping him with the Catalan giants until 2016. The buyout clause in his contract was valued at €100 million. On June 7, 2014, he signed a contract extension with the Catalan side, binding him to the club until 2018 and retaining his buyout clause at €100 million. On 7 June 2015, he started in the Champions League Final, assisting the club to its fifth victory. Moreover, in the competition by defeating Juventus 3-1 at Berlin’s Olympiastadion, making Barcelona the first club in history to win the domestic league, domestic cup, and European Cup/Champions League treble twice.

Following the retirement of club captain Xavi in 2015, he was appointed Barcelona’s fourth captain for the 2015-16 season, following Andres Iniesta, Lionel Messi, and Sergio Busquets. He had agreed on a new deal with Barcelona on July 27, 2016. Which will hold him at the club until 2019. Despite having collected several titles with the side, he scored his first and only goal for Barcelona on April 26, 2017. It was a penalty kick in a La Liga match against Osasuna. Similarly, Barcelona announced his departure from the club on January 23, 2018, after seven and a half seasons. With Barcelona, he won five La Liga titles, five Copas del Rey, three Supercopa de Espana, two UEFA Champions Leagues, a UEFA Super Cup, and a FIFA Club World Cup. He joined the Chinese Super League club Hebei China Fortune for €5.5 million on January 24, 2018.

Despite having collected several titles with the side, he scored his first and only goal for Barcelona on April 26, 2017, a penalty kick in a La Liga match against Osasuna. Barcelona announced his departure from the club on January 23, 2018, after seven and a half seasons. With Barcelona, he won five La Liga titles, five Copas del Rey, three Supercopa de Espana, two UEFA Champions Leagues, a UEFA Super Cup, and a FIFA Club World Cup. He joined the Chinese Super League club Hebei China Fortune for €5.5 million on January 24, 2018. 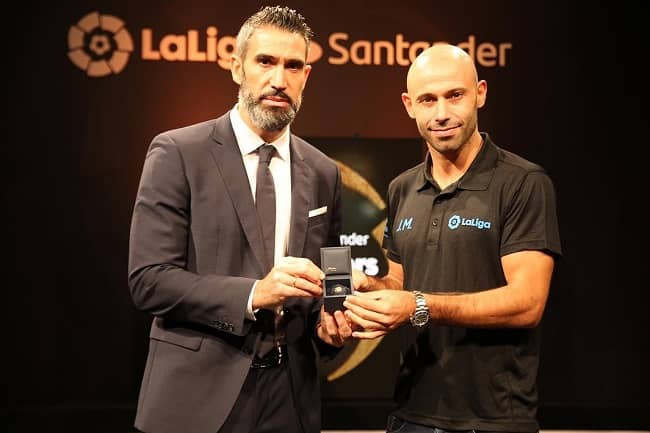 In a Chinese FA Cup match against Shandong Luneng Taishan on May 2, 2018, he scored his first goal for the club. He made 53 appearances for Hebei China Fortune in his one year with the club. Similarly, he joined Argentine side Estudiantes on a free transfer in January 2020 and made his league debut on January 25, 2020, in a 1-1 draw with San Lorenzo. After one year with Estudiantes, he announced his retirement as a professional footballer on November 15, 2020.

He has represented Argentina at a number of different ages. He has represented Argentina at both the U20 and senior levels. His first international appearance was for Argentina’s U17 national team in 2001. In June 2003, he competed in the Toulon Tournament, where he was declared the best player as Argentina U20 placed third. On July 16, 2003, he made his Argentina national team debut in a friendly against Uruguay. In 2003, he was called up to compete in the FIFA World Youth Championship, where Argentina finished fourth once again.

Similarly, in 2004, and 2008, he won two gold medals at the Summer Olympics. Being the first male footballer to do so since Hungarian defender Dezso Novak in 1968. He was Argentina’s captain from 2008 to 2011. He has led his country in five Copa America tournaments, coming runner-up in 2004, 2007, 2015, and 2016, as well as four FIFA World Cups, reaching the 2014 Final. Following Argentina’s elimination from the World Cup after a 4-3 defeat to France in the Round of 16, he announced his retirement from international football on June 30, 2018. There he earned 147 caps and scored three goals for his country.

Javier Mascherano is a married man, according to his personal life. He married Fernanda Moreno, with whom he had been in a long-term relationship. In the year 2008, the pair married. The couple has three children: two daughters, Lola and Alma, and one son, Bruno. Similarly, he has a close bond with his love and son. They are enjoying a happy life together. 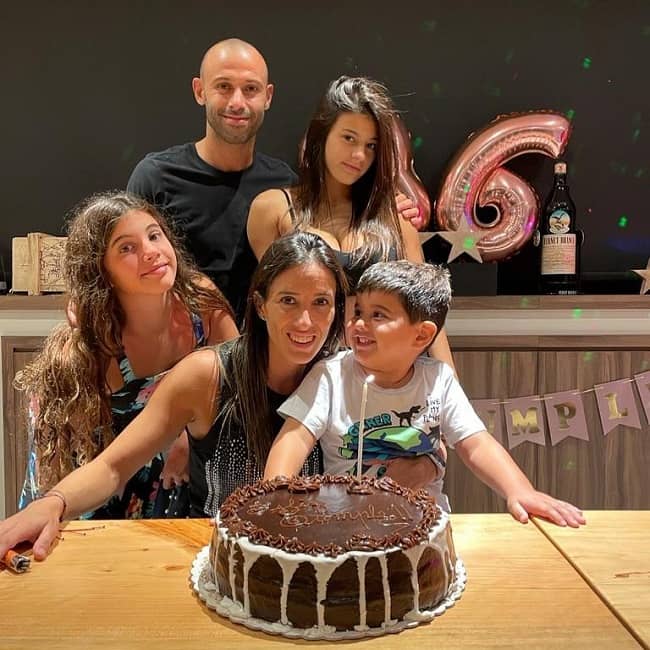 Javier Mascherano is 1.74m long, or 5 feet and 9 inches tall. He weighs 73 kilograms. He has a muscular physique. Moreover, his eyes are dark brown, and his hair is purple.