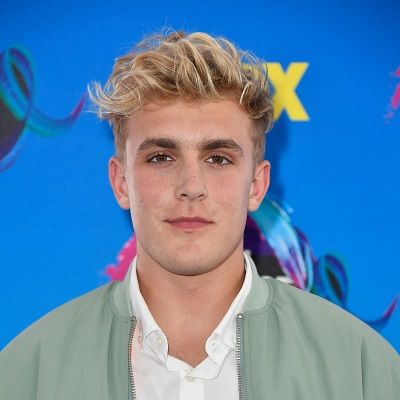 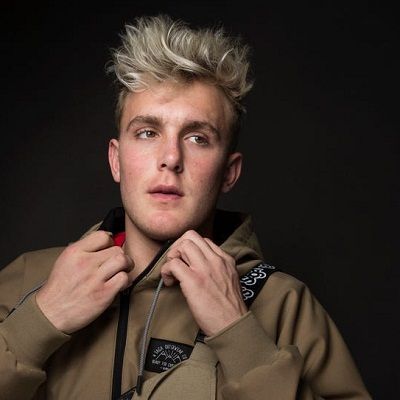 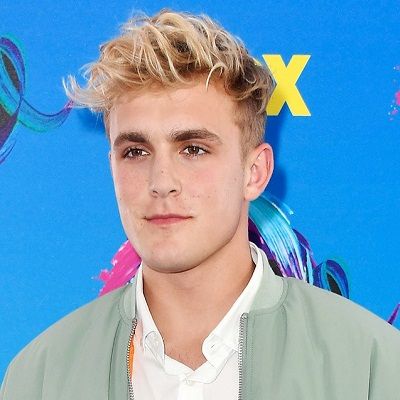 Jake Paul is a YouTube star and actor. Jake Paul is also a singer who has created singles with famous musicians like Greg Cipes and Gucci Mane. Similarly, he is one of the highest-paid YouTubers of recent years.

Jake Joseph Paul was born on 17 January 1997 in Cleveland, Ohio, and raised in Westlake, Ohio. His parents are Pamela Ann Stepnick (mother) and Gregory Allan Paul (father). Likewise, he has an elder brother named Logan Paul, who is also a renowned YouTuber. In 2022, he is 25 years old and owns American citizenship.

Furthermore, information regarding Paul’s educational qualifications is not much mentioned on the internet. However, he attended Westlake High School in his neighborhood. 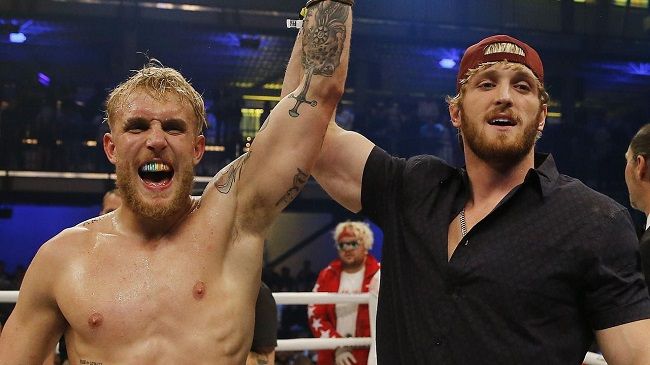 Caption: Jake and Logan after Jake’s win against Gib in the boxing match. Source: Daily Mercury

Jake Paul is an international YouTube sensation. However, he started his career by posting videos on Vines. He had 5.3 million followers on this app at the time of its shutdown. Likewise, he started his acting career with the TV series Bizaardvark in 2016. His role in this series was Dirk, the main character. Moreover, he landed his first role in the movie Dance Camp as Lance in 2016. Other movies that he starred in include Mono, and Airplane Mode. Furthermore, other TV series he starred in include The Monroes, Walk the Prank and The Price Is Right.

Additionally, he is also a singer. He has released a total of 15 singles from 2015-2019. Some of these singles are Jerika, Saturday Night, Randy Savage, and I’m Single among many others. Likewise, another single It’s Everyday Bro created with Team 10 gained 70 million views on YouTube within a month of its release and became the 3rd most disliked video on YouTube.

On February 24, 2018, there was an announcement that Jake and Logan would be fighting KSI and his younger brother, Deji, in two white-collar boxing matches. His fight against Deji was the chief undercard bout before their older brothers, KSI and Logan Paul, did battle in the main event. He won the fight after 5 rounds as Deji’s corner threw in the towel after a flurry of shots.

Additionally, on December 21, 2019, there was another announcement that he would be making his professional boxing debut against fellow YouTuber AnEsonGib a.k.a. Gib on January 30, 2020, in Miami. The Jake and Gib match was the co-feature of the match between professional boxers Demetrius Andrade and Luke Keeler. In the end, he won the fight via technical knockout at 2:18 in the first round. 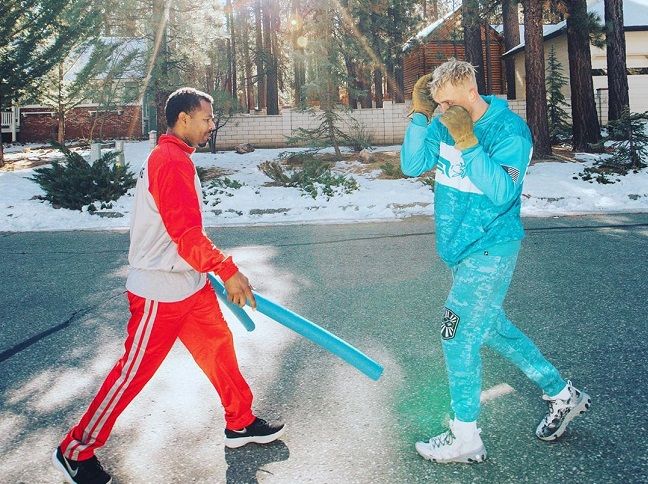 Caption: Jake Paul is training with the legend Shane Mosley in the high mountains. Source: Instagram

He announced his partnership with Los Angeles-based brand development group GenZ Holdings Inc. This partnership was announced in February 2020 and aimed to create a $19.99 per month platform. The platform was aimed at teaching children how to build an online presence. “The Financial Freedom Movement” promises to give subscribers access to “Jake Paul’s personal experience, rituals and secret formula” and “cutting edge mentorship, coaching, and training”.

Many have criticized the program with one interviewer questioning whether the program would send a dangerous message to his young fanbase. Further, YouTuber h3h3productions went and called the platform a “scam”. Also, BuzzFeed News reporter Lauren Strapagiel described this as “deeply underwhelming”.

Jake Paul has been nominated for the title “Videographer Award” and “Comedian Award” at the 6th Annual Shorty Awards in 2014. Likewise, he has bagged a total of three awards including “Social Media Star” at the 2017 Radio Disney Music Awards, and “Choice Music Web Star” and “Choice YouTuber” at the 2017 Teen Choice Awards.

As of 2019, Paul has an estimated net worth of $19 million. He is also listed among the wealthiest YouTubers of the year.

Currently, Jake paul is dating Julia Rose. He often posts their pictures on Instagram handles and also features her in several YouTube videos.

Paul began dating a fellow internet sensation, musician, and model Tana Mongeau in April 2019. Shortly after that, the couple got married in July 2019. However, the pair are not legally married. However, in early 2020, the couple announced that they were taking a break. He publicly announced his part through an Instagram post on January 3, 2020, stating how crazy the past couple of months have been and that they are doing what’s best for them at the moment.

However, many people doubt the genuineness of their marriage. It is because he has previously dated and married a Team 10 member Erika, which he revealed was all fake and was only for the videos. They had also created a music video titled “Jerika”. Hence, people are accusing him of fake marriage with Tana. Before this, he dated Alissa Violet, however, the couple split in 2017. 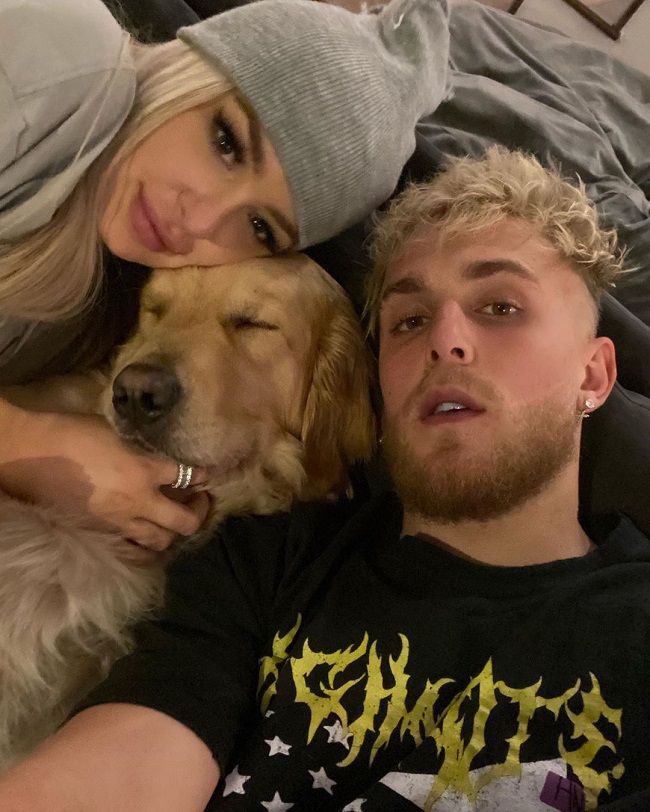 Caption: Jake announced his break with Tana through this captioned photo. Source: Instagram

In July 2017, Cobra Acquisitions sued Paul for $2.5 million. It is the company that owns Paul’s house located in Beverly Grove, Los Angeles. It was done so for creating a public nuisance in the neighborhood when his fans gathered outside his new house after he made his address public.

Disney show Bizaardvark also expelled him from its second season for creating public disturbances through his pranks, parties, fire hazards, and the commotion created by his fans in his neighborhood. Moreover, his neighbors in Beverly Grove, a neighborhood of Los Angeles considered filing a class-action public nuisance lawsuit against the star after he’d made his home address public, leading crowds of fans to gather outside the residence, turning the street into a madhouse

Moreover, on December 30, published a video that looked exactly like many others on YouTube: a bait-y thumbnail with Paul’s stupefied expression surrounded by cutouts of objects, numbers, and random punctuation marks having a comically hyperbolic title “I Spent $5,000 ON MYSTERY BOXES & You WON’T Believe What I Got (insane).” He along with other YouTubers including RiceGum was criticized for promoting a shady gambling website to their millions of subscribers, many of whom are children.

Moreover, the shady gambling website was MysteryBrand that offers the chance to open a digital “mystery box” of pre-selected items with a promise to win one in real life at random. However, many users have said they have not received prizes they won through the site. This is also why he came under fire for promoting such sites.

In the first video in the year 2018, he posted a video titled I lost my Virginity… which is not only misleading but wildly inappropriate for his audience. It is because both he and his brother Logan have an audience of young, impressionable fans and that’s why some of their videos have courted controversy in the past for being wrong, sometimes on many levels.

The woman in the second thumbnail he chose is decidedly more clothed than before. To brief the video, he doesn’t have sex on this video but rather kisses his girlfriend a couple of times. He shows his ‘virginity’ losing moments in the form of skiing for the first time.

The video is also full of the sort of antics that his 19 million subscribers will be familiar with. It opens with him using a fire extinguisher to wake up his mates in their ski cabin, then adds in spraying soft drinks all over the property as well as smashing through a fly screen.

To only make matters worse for him, a video obtained by TMZ shows him saying the N-word in a freestyle rap. Furthermore, people accused him of using age-inappropriate thumbnails on his YouTube videos and TMZ reported him of using the racial tag “nigga” several times while rapping. Similarly, he created a drama when he revealed that his relationship with fellow YouTuber Erika was fake all along. The pair also married, which was all for the videos. Hence, his marriage to Tana is also speculated to be fake just like his previous one.

On July 11, 2020, Paul threw a large party at his home in Calabasas, California despite the COVID-19 pandemic. He invited dozens of people to attend without wearing masks or maintaining social distancing. His neighborhood even complained about it.

Jake Paul has a slim body standing 6’2” tall. Likewise, his weight is around 87 kgs. He has naturally blonde hair and dark brown eyes.

He is a renowned YouTuber with 19.8 million subscribers on his YouTube channel. Likewise, he has 13.2 million followers on Instagram and 3.7 million on Twitter. Moreover, he shares pranks, comedy, music videos, and much more with frequent collaborations with other YouTubers.