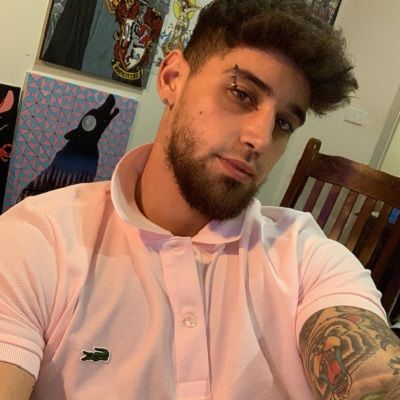 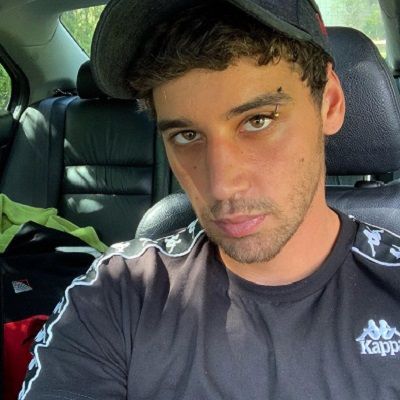 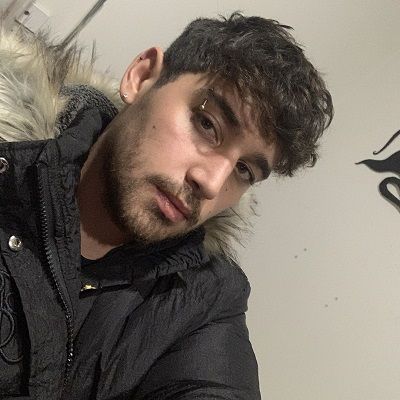 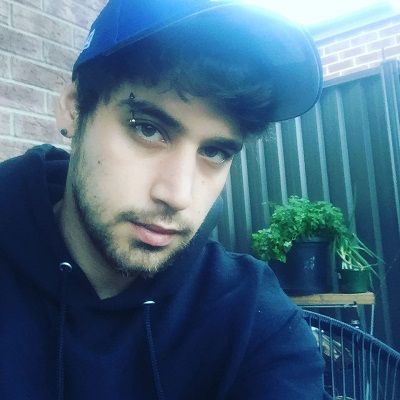 Jai Brooks’s full name is Jaidon Domenic Matthew Brooks. He was born on May 3, 1995, in Melbourne, Australia. Currently, he is 25 years old and his birth sign is Taurus. He has a twin brother named Luke Brooks and an older brother named Beau Brooks. Moreover, he was born two minutes after his twin brother, Luke.

Gina Brooks is his mother who is not only his biggest fan and supporter but also his manager. She helps schedule tours and business meetings for him and accompanies him to these meetings. He was a bright student all through his schooling years. He along with his brothers dropped out of high school to concentrate on their YouTube career.

He has an apt dressing sense, a fetish for hats, and a mischievous smile. He is often teased by his group for his name, but he takes it all in good light. Likewise, He is very sporting and takes on dares confidently. Moreover, he is also one of the most hardworking of the lot, as even when the group isn’t recording videos, he is busy editing or making videos better. He loves staying fit, and regularly posts his pictures on Instagram.

With all the limelight that he has acquired, it is difficult for him to stay out of the spotlight, as he is always under public and media scrutiny. He loves music and calls it the medicine for his soul. Likewise, He loves R & B music and his favorite artists are Usher, Justin Bieber, Michael Jackson, and Bruno Mars.

He is a sports and video game lover. He is also a food fanatic; his favorite food is lasagna and tacos. His favorite movie is ‘Step Brothers,’ and he loves the color gray. He hates spiders, and gets the shivers if he ever spots a spider!

Jai is part of a group called the Janoskians with 4 other friends; Luke Brooks, Beau Brooks, and Daniel Sahyounie who have been posting comedy videos on YouTube since September 2011. Further, ‘Janoskians’ stands for ‘Just Another Name Of Silly Kids In Another Nation Skip’. They posted their first video in 2011. He and his group were also featured in a video by famous Australian singer, Faydee.

When he and his twin were eight, they featured in an advertisement that was aired in Japan. However, their random public pranks have been the most viewed and have earned them millions of viewers, the most popular ones are their hilarious parodies.

Presently, he is part of multiple YouTube channels. His other channel ‘TwinTalkTime’ is run by him and his twin brother, Luke. The channel has managed to collect thousands of subscribers. Apart from his fun stuff, he is also a singer and songwriter.

Since the signing contract with Sony Music in 2012, his group ‘Janoskians’ has released many songs. In 2015, they released their EP, ‘Would U Love Me. Some of their hit songs are ‘Set This World on Fire, ‘Real Girl Eats Cake’, ‘That’s What She Said, and more. They were also present at Nickelodeon’s 28th Annual Kids Choice Awards. As young entrepreneurs, they have their own clothing line called the ‘Dirty Pig Clothing’

In July 2012, Jai Brooks, and his twin brother Luke, started a competition to see which one could get Ariana Grande’s attention. He tweeted her and made a video for her explaining why she should date him. The brothers then started the hashtag #JaiVsLukeForAriana which trended on Twitter. Ariana’s mother, Joan Grande, clicked on the hashtag and then started to watch the Janoskian videos on Youtube. She thought the boys were really funny so showed the videos to Ariana and told her to respond to one of them.

Ariana messaged her phone number to him on Twitter because she knew that Luke wasn’t actually sincere. They started to tweet each other a lot. He and Ariana got to know each other very well by texting and video chatting every day. They officially began to date on October 7, 2012, and tweeted that they loved each other on Twitter. He flew out to see Ariana and they finally met in person for the first time on December 30, 2012.

When Ariana got out, they kissed right away. Ariana’s brother Frankie posted a video on Youtube of him and Ariana’s first meeting where he tripped as he came in the door. Though, this video was a joke and they actually met the day before. He stayed in New York for the next two weeks and spent all of his time with Ariana. He finally flew back to Australia on January 11. And there is a video of them kissing and saying goodbye at the airport.

In February, he gave a surprise visit to Ariana on the set of her music video for “The Way”. In the video, Mac Miller and Ariana kissed although it was completely directed. They briefly broke up around that time and many fans believed it was because of the kiss. He, however, said he wasn’t mad about it and he knew it was just acting for the video. They got back together a couple of weeks later and stated the breakup was due to long distance.

For the next five months, Ariana and his relationship were very strong. He visited America very often to see Ariana where they spent a lot of time together. Both of them posted pictures on Instagram and Twitter of being with each other and stating how much they loved one another.

They went to Disneyland together and Ariana rented him a sloth named Lola for his 18th birthday. Ariana was surprised him on stage during one of his concerts and he visited her on the set of her “Baby I” music video where there are pictures of them hugging and kissing. 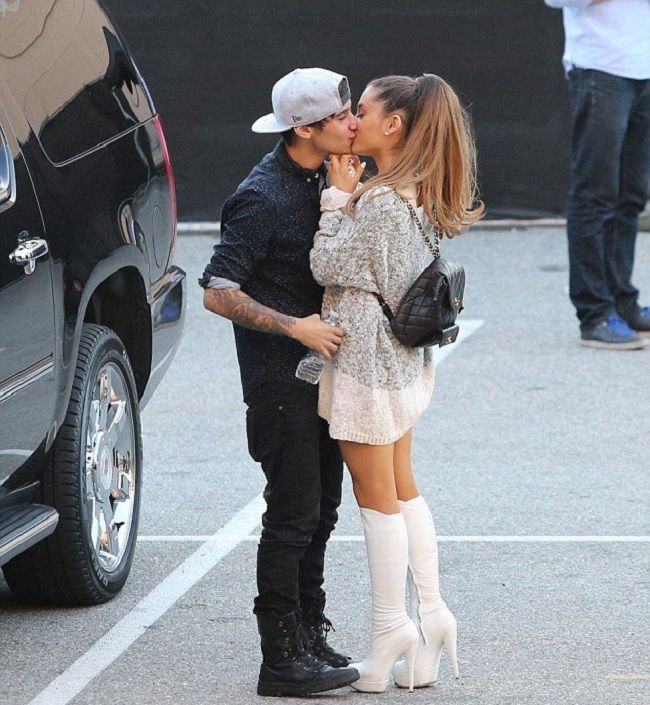 In early August it was confirmed that Ariana was releasing a song titled “Almost Is Never Enough” which featured English singer Nathan Sykes. Together, they filmed the music video and performed the song on many occasions which caused them to spend an increasing amount of time together. On August 6, he posted a picture on Instagram to celebrate his 10 month anniversary with Ariana. The caption was:

“This girl means so much to me. Not many long distance relationships workout, but ours is different. We are not only each others’ boyfriend/girlfriend, we are also each others best friends. To still be so in love with each other even though at times we could be a world apart, really means something. I am the luckiest guy on this earth and really have found one of a kind. I want you For a long time and I’m so blessed to be apart of your life. Thank you For the life long memories, I love you and happy 10 months @arianagrande ❤ ps. Sorry this was so mushy.”

It seemed that Jariana was still strong but around a week later Ariana confirmed that she and he had broken up. Later, in an interview with Complex, Ariana revealed that he had broken up with her over a text message the opening night of The Listening Sessions right before she was about to go on stage.

When the music video for “Almost Is Never Enough” came out, some fans became suspicious of a romantic connection between Ariana and Nathan. They did not directly deny it, and only said that they were young and trying to figure everything out but said they would tell their fans if there was anything to tell. Throughout the next month, the speculation intensified with Nathan and Ariana dropping hints everywhere. They finally confirmed their relationship in late September.

On October 7, 2013 (what was supposed to be his and Ariana’s one-year anniversary), he accused Ariana of cheating on him with Nathan. He wrote a TwitLonger with the opening lines as “Yes I was cheated on. Yes, it does suck. Yes, I was left for another man.”

Ariana denied the rumors saying that they were completely false, hurtful, and shocking, but she wants to move forward and forget about it. She claimed that he was just using her to get his “fifteen minutes of fame.” There were no signs of him and Ariana talking for the rest of the year. However, Ariana and Nathan dated until December and then broke up.

In early 2014, there had been many hints of him and Ariana being back together. They re-followed each other on Twitter and Instagram and Ariana also followed his brother. Ariana posted an Instagram video on March 24, 2014 and many fans said they can hear him laughing. They often tweet love emoji’s around the same time and indirectly tweeted each other.

On April 29, 2014, Ariana did an interview where she said she loves a bad boy, someone who is funny, and who has a lot of tattoos. He fits all of these categories. She then said she tried to date a good boy for a little bit but that it didn’t work. This is most likely referring to Nathan Sykes.

Ariana and he were caught kissing after Ariana performed at the iHeartRadio Music Awards on May 1, 2014 which officially confirmed their relationship. The next day they both posted on Instagram that they were listening to Elvis Presley within forty minutes of each other.

Ariana has posted some pictures of him and they continued to indirectly tweet love emojis to each other, although they were not as open about their relationship as they were in the past. Ariana posted on her Instagram pictures of him carrying her and another of them kissing on the set of the music video for “Break Free”.

Their final break up!

In July 2014, Ariana’s grandfather becomes seriously ill. She spent the whole month of July in Florida where he lives. Ariana’s family was already with her and all of her friends flew down to comfort and spend time with her. Her grandfather then passed away on July 22, 2014. She was very close to him and his death was very hard for her to go through.

This along with a source close to Ariana, confirmed that he and Ariana had broken up. He did not come down to be with her when she needed him most, due to him and the Janoskians visas had expired; even though Ariana needed him to be there he was stuck in Mexico trying to get back into the United States.

He has dated Allegra Rotella. They spent a good time together. He shared a picture of him planting a kiss on the cheek of a pouting girl, further firing rumors of the alleged link-up. But, they broke up. However, as of now, he is currently single and concentrating on his career. 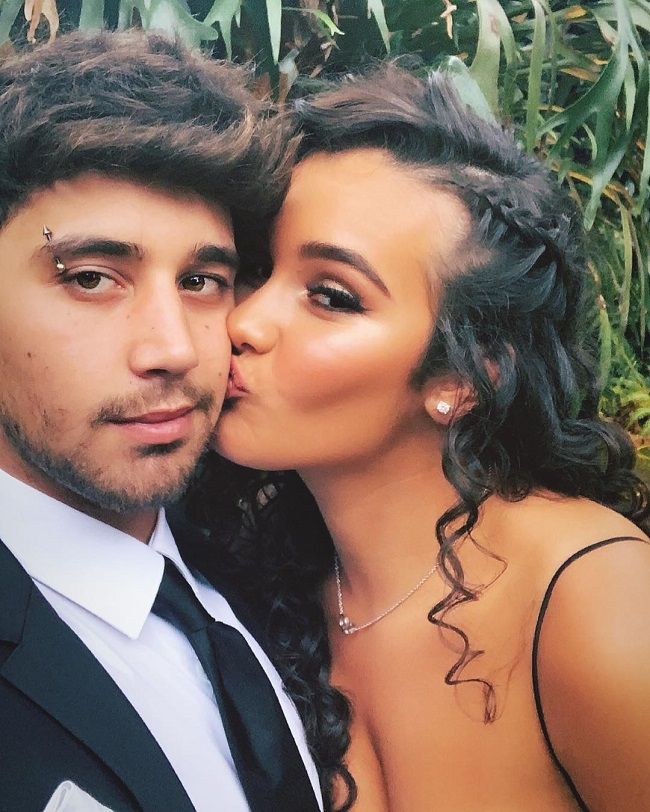 Jai has an athletic and fit body structure. He stands at a height of 5 feet 8 inches tall and he weighs around 72 kg. Moreover, he has a pair of brown eyes and dark brown hair. There are no further details regarding his body measurements. 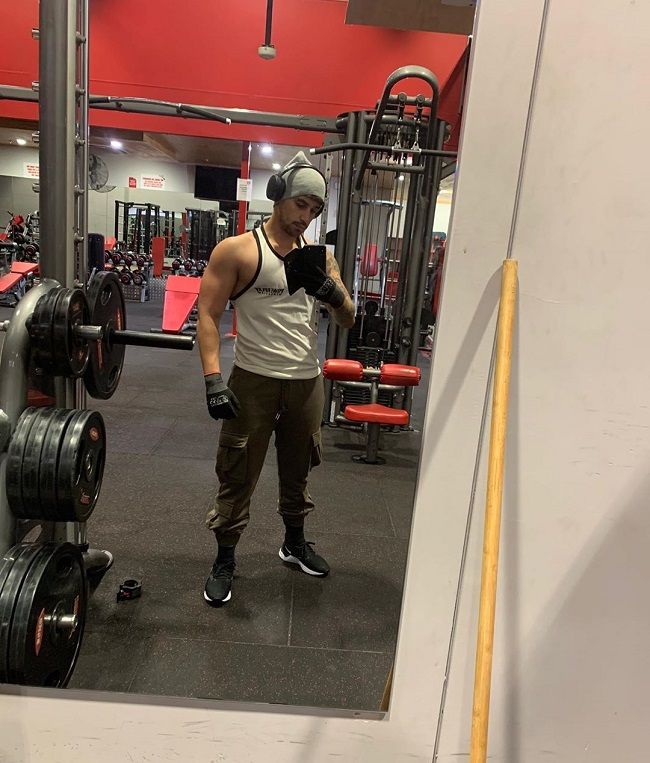 Caption: Jai Brooks clicking a mirror selfie while in the Gym. Source: Instagram

No doubt, he pockets a heavy amount of money through his YouTube and music career. Their ‘Janoskians’ channel earns over $5 million. However, he has an estimated net worth of around $1 million – $5 million.