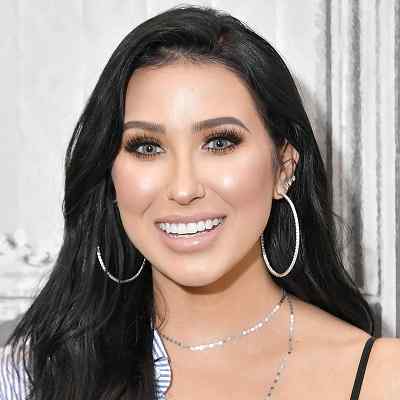 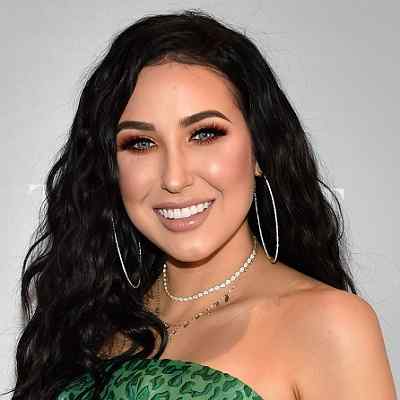 Jaclyn Hill is an American professional makeup artist, beauty and fashion blogger, and YouTube phenomenon who publishes videos to her channel Jaclynhill1. Jaclyn Hill’s creative content about tips and tricks of Makeup has garnered more than 5.83 million subscribers.

Jaclyn Hill is 31 years old. She was born on July 20, 1990, in Illinois, the United States under the astrological sign of Cancer. Similarly, her full name is Jaclyn Roxanne Hill. Her mother’s name is Robin Eilers and her father’s name is James Eilers. 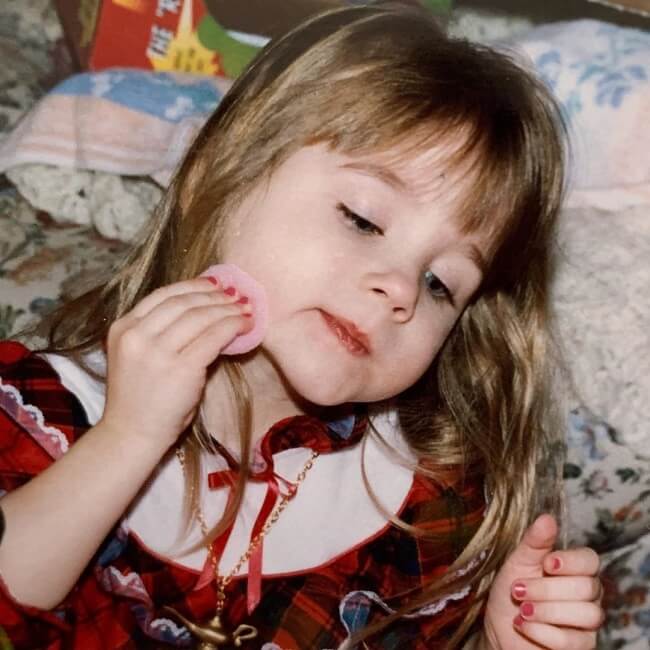 Caption: Jaclyn Hill was captured on her childhood photo putting makeup on her face (Source: Instagram)

She is the youngest member of the family and has two older siblings a brother, Nicholas, and a sister Rachel. Likewise, she grew up near Mineral, Illinois on a farm that had been in her family for four generations.

Her family later moved to Tampa, Florida, after her father said he was called by God to pursue missionary work. Then her father became an evangelist. For the next many years, she along with her family traveled to different countries including India and Honduras to preach Christianity. After her parents separated in 2012, she has not any link with her father.

Moving toward her educational background, she was homeschooled during her childhood. Later, she attended college in Sarasota, Florida where she studied photography. Moreover, she has formerly worked as a freelance makeup artist and at a MAC Cosmetics store.

Professionally, Jaclyn Hills is an American entrepreneur and internet personality who gained popularity via her YouTube channel. She started her career as a freelance makeup artist in the Tampa area. She later also worked at a MAC Cosmetics store. On September 7, 2010, she launched her YouTube channel at the age of 21. Primarily, her videos introduced makeup tutorials encouraged by Kourtney Kardashian and Kim.

Her video titled ‘Kylie Jenner Inspired Makeup Tutorial’ posted on 25th August 2014 supported her to get more subscribers and a broader fan base. As of now, she has gained  5.83M subscribers with almost 558 million total views.

Two of her most viewed and popular videos on the channel include “Smokey Cat Eye Tutorial | Jaclyn Hill,” and “Get Ready With Me & Kim Kardashian | Jaclyn Hill.” Respectively, the video has garnered 16M views and 10M views.

Moreover, she has collaborated with the Australian cosmetics brand, Becca. Together, they released the bestselling highlighter called “Champagne Pop”. Beauty retailer Sephora traded more than 25k units of “Champagne Pop” within 20 minutes of its release. It successfully became breaking sales records. Likewise, in 2017, BECCA was bought by Estée Lauder for $200 million.

In 2015, she collaborated with Morphe Cosmetics to produce a palette containing her favorite Morphe eyeshadow products. Also, in June of 2017, she created a new eyeshadow palette ‘Jaclyn Hill Palette” which too became a huge success.

She also released a limited-edition, gem-encrusted makeup brush set with Morphe, as well as a second eye shadow palette, under the marketing name “Jaclyn Hill x Morphe”. All of her three products sold out quickly after their release dates.

In June of 2018, she released her vault collection with Morphe. Her collaborations with Morphe and were reported to have sold $10.7 million and $12.2 million in EMVs, respectively.

In May of 2019, Hill launched her own cosmetics line named Jaclyn Cosmetics. It included swatches of the 20 nude “So Rich Lipstick” shades due to launch on 30th May 2019.

Hills has made it a long way since her starting days and now owns a company and a line of cosmetics and has become a famous name among the best stylists. 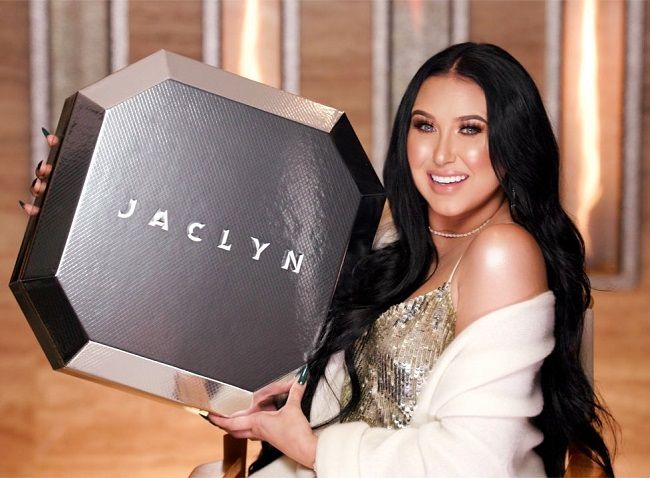 Jaclyn’s new cosmetic line initially met with mostly positive reactions from long-time fans. But later it yielded some criticism for her definition of a perfect nude shade, photos that showed some differences with pigment, and a lack of reviews from others in the beauty community.

On May 30, 2019, she released her 20 nude lipsticks through her website. Despite her product was surrounded by mild controversy, the product sold out within the first day and seemingly proved to be successful. After some timed, the receipt of their orders, customers instantly noticed issues in quality and asserted that their lipstick either arrived melted or that it broke after a single-use.

However, some of the customers defended the brand by saying hot temperatures and shipping conditions were to accuse, many continued to voice more driving concerns on social media. Consumers’ share many photos on social media showing various flaws in the product, such as air bubbles, gritty texture, hair, and mold.

Then, Hill was quick to deny the allegations by stating that she had not seen anyone criticize. Nonetheless, she encouraged her customers to stand out to her and her team if they were disappointed in any way and promised to either remunerate the customer or replace the product.

After more severe cases of dissatisfaction, the news began surfacing of allergic reactions to the product. Likewise, the user was also getting various symptoms including itching, swelling, redness, and cold sores.

Later on June 12, 2019, she addressed the growing concern by uploading a video to her YouTube channel titled “My Lipsticks”, in which she explains the potential causes of damage, extends her apologies to fans and customers, and restates to viewers that she expects to compensate those who share their dissatisfaction with her team.

However, her apologies and explanations were not well accepted by fans, and the YouTube community and started backlashing her. Then she deleted her Instagram and Twitter account on July 3, 2019, leaving only her YouTube channel available to the public. Currently, all her allegations and issues have shut down, and also her social media accounts are back to normal.

Speaking on Jaclyn Hill’s earnings, she is an American entrepreneur and an internet personality and has earned a good sum of money in her career. Being active since 2011, she has collected a handsome amount of money from several videos. Her income comes from deals with cosmetic companies like Becca, and Morphe as well.

Though she has been succeeding her job in the best way, she has not bagged many awards and honors to date. Allocating reports from several sources as of 2010, it is found out that Hill’s current estimated net worth is to be around $6 million.

Reflecting on Jaclyn Hill’s personal life, she is currently in a relationship with a guy named Farnum. He is a musical artist as well as a YouTuber. The rumors about her new affair whirled in the media shortly after she divorced her husband as she kept sharing a mysterious handheld shot of the pair. In one of her Instagram posts, she captioned that she wants to go on a date with him for the rest of her life.

Recently, she posted a beautiful duo picture on June 15, 2020, captioned  “I want to have your babies?.” This indicates the duo seems to have a close relationship with each other and take their relationship forward. 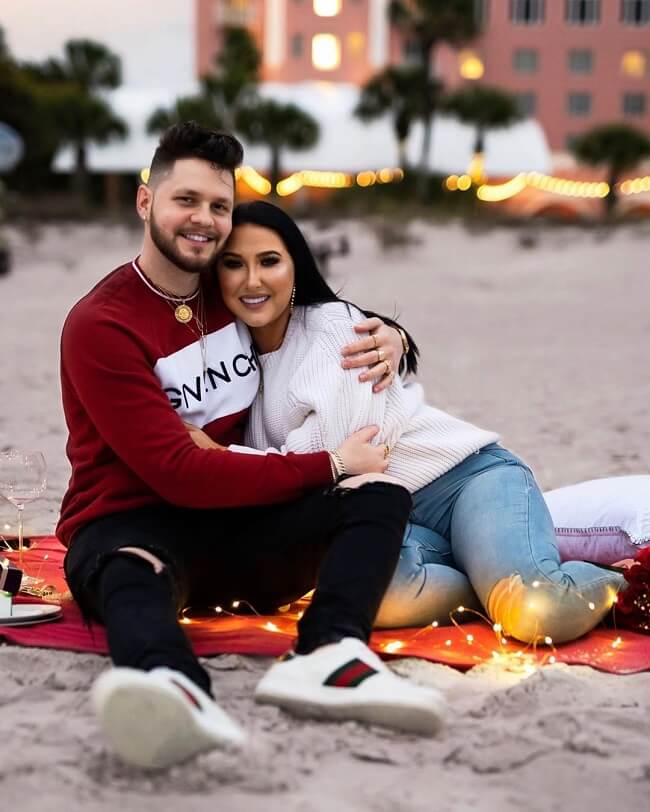 Caption: Jaclyn Hill posing for a photo with her boyfriend, Farnum (Source: Instagram)

Talking about the past relationship, she married to drummer Jon Hill on 29th August 2009. Her ex-husband Jon is a drummer as well as a youtube personality. Likewise, she met Jon during her teenage days. At the age of 19, she married him while he was 21. After nine years of relationship, the adorable duo decided to get a divorce on 16th May 2018. The purpose behind their divorce was due to her husband Jon Hill cheated on her.

Observing her body measurements, Hills stands a height of 5 feet 7 inches and weighs around 61 kg. Furthermore, she has beautiful blue eyes with dark brown hair. Her bra size is 32B, waist size is 25 inches, and hip size is 37 inches.