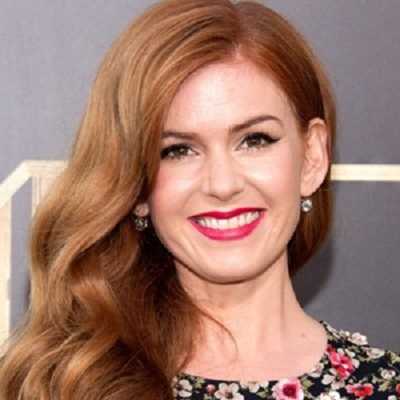 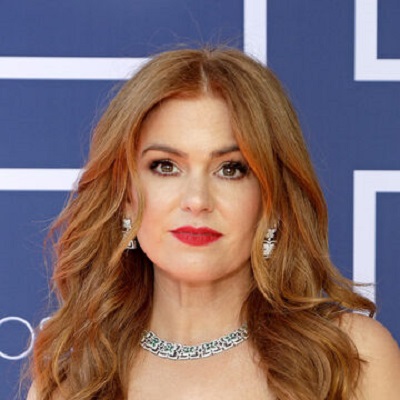 Isla Lang is an Australian actress and author. Isla Fisher is famous for her movies such as ‘Home and Away’, and ‘Now You See Me’.

Born on February 3rd, 1976 in Muscat, Oman Isla Lang Fisher is an Australian actress and author. She moved to Australia at the age of six. She is most famous for playing the role of ‘Shannon Reed in the series Home and Away’. Her star sign is Aquarius. She is 46 years old.

Isla was born to Scottish parents, Elspeth Reid and Brian Fisher. Her father worked as a banker for United Nations in Oman and her mother was a writer. She spent her childhood with her four siblings. Isla went to Swanbourne Primary School and later attended Methodist Ladies College in Perth. In addition, she was interested in school productions and mostly involved herself in playing lead roles in them. Hence, Fisher took part in productions like ‘Little Shop of Horrors’ which is a popular horror comedy rock musical.

Isla started acting in many television commercials as a child actor. Her television debut was in 1993 which was a guest role in children’s television series like ‘Paradise Beach’ and ‘Bay City’. Her debut in ‘Paradise Beach’ earned her a lead role in 1994. It was in the Australian television soap opera ‘Home and Away’ as ‘Shannon Reed’. She appeared in 345 episodes between 1994 and 1997. In addition, Isla portrayed the character of a confused young woman who realizes she is bisexual with an eating disorder in the show. Hence, she was well praised for her role in the show.

In order to better her acting skills, Isla enrolled herself at L’École Internationale de Théâtre Jacques Lecoq, Paris . She worked in different theaters and also appeared in pantomime in the United Kingdom. She then moved to the USA. In 2002, she appeared in ‘Scooby-Doo’, an American live-action computer-animated family comedy adventure film. The role ended up becoming her commercially successful film in her debut in Hollywood. She also went on to play supporting roles in movies such as ‘The Wannabes(as ‘Kirsty’) in 2003; ‘Dallas 362’ in 2003 and ‘I Heart Huckabees’ in 2004. 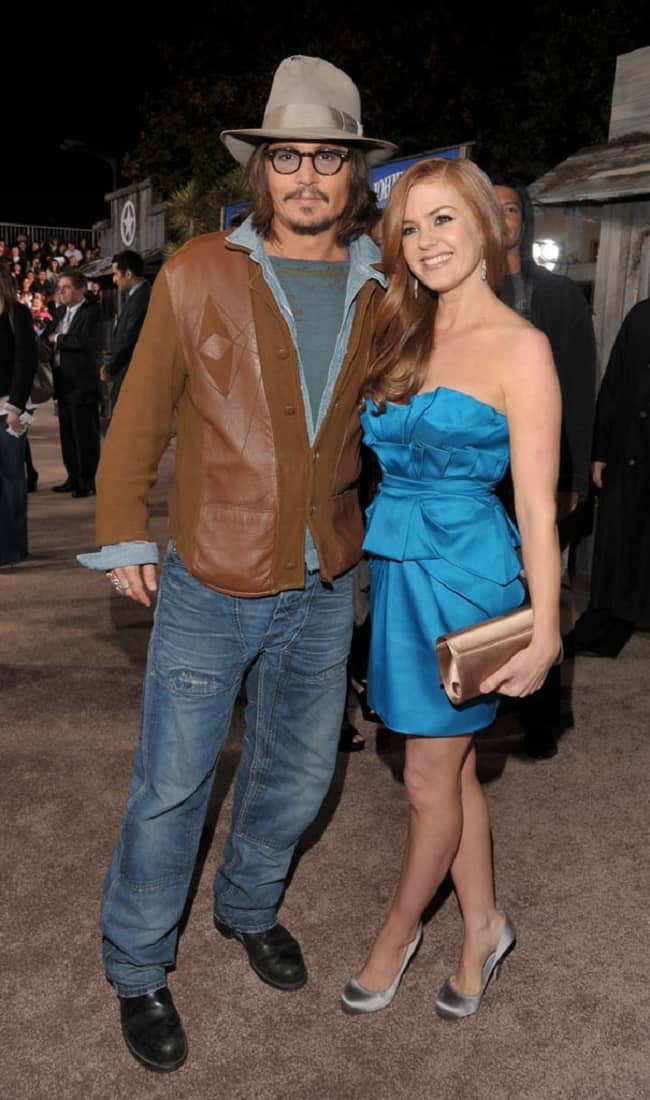 Caption: Isla Fisher and Johnny Depp during the premiere of ‘Rango’ in LA
Source: POPSUGAR

Fisher played the role of ‘Gloria Cleary in the movie ‘Wedding Crashers’ in 2005. Her role in the movie was of a sexually aggressive daughter of a politician. The movie was a commercial success. It earned her two nominations at the Teen Choice Awards. She also won the Breakthrough Performance Award at the MTV Movie Awards. She also appeared in movies such as ‘London’, ‘Wedding Daze’ and ‘The Lookout’.

In 2008, Fisher was offered to voice the character of ‘Dr. Mary Lou Larue’ in ‘Horton Hears a Who’. It was an animated adventured comedy film.  After this, she appeared in many more animated movies as a voice artist. In 2009, she played the role of ‘Rebecca Bloomwood’, a college graduate working as a journalist in New York City in the movie ‘Confessions of a Shopaholic’. Even though the movie did not receive positive reviews, it ended up being a commercially successful movie.

Isla worked as a voice artist in the movie ‘Rango’. It featured Johnny Depp, Bill Nighy, Abigail Breslin, and Alfred Molina. The voiceover resulted in her winning the Best Animated Female award at the Alliance of Women Film Journalists Awards. She also voiced the character of ‘The Tooth Fairy in the movie Rise of the Guardians.

In 2013, she played a big role. She played the role of ‘Henley Reeves’ ‘Now You See Me’. Her next movie was a romantic drama movie ‘The Great Gatsby’ alongside Leonardo DiCaprio and Tobey Maguire.  Hence, she was nominated for her role in the AACTA Award, the Australian Film Critics Association Award, and the Film Critics Circle of Australia Award. Recently, she has played in movies such as ‘Visions’, ‘Keeping Up with the Joneses’ and ‘Nocturnal Animals. She has also written two teen novels ‘Bewitched’ and ‘Seduced by Frame’.

The actress has worked hard and played very interesting characters in her movies. Hence, her net worth is $160 million.

In 2002, Isla started dating Sacha Baron Cohen, an English actor, and comedian. They got engaged in 2004 and later got married in 2010. The couple has 2 daughters(Olive and Elula) and 1 son(Montgomery).  The couple donated a sum of US$500,000 to ‘Save the Children’. It is a program to vaccinate children in Northern Syria against measles. They also donated US$500,00 to the International Rescue Committee, to help and support Syrian refugees in 2015. 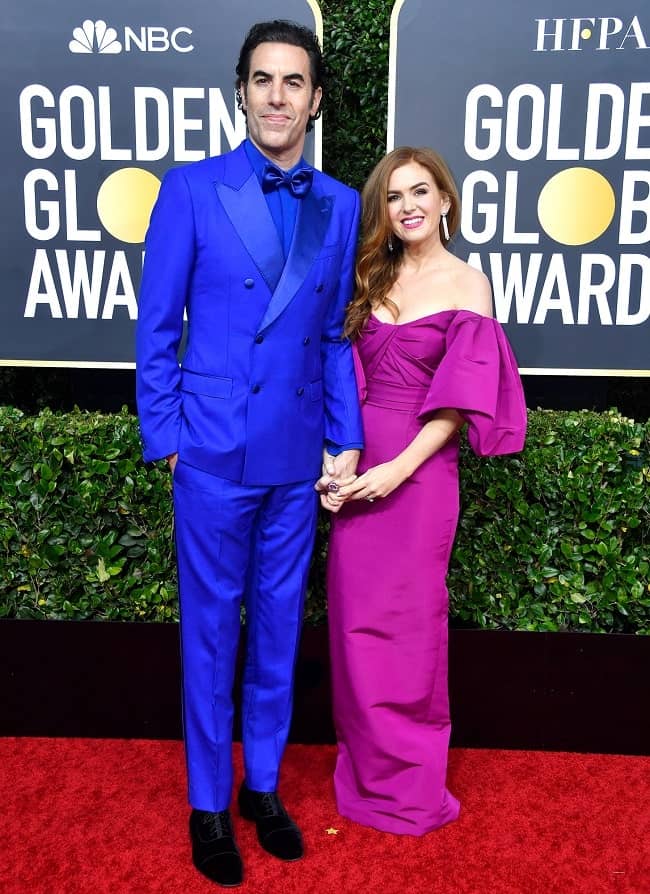 Isla Fisher is 5 feet 2 inches tall and weighs about 57kgs. Fisher has light brown eyes and red hair. She is active on social media as well. She has around 1.9 million followers on her Instagram. Her Instagram handle is @islafisher. 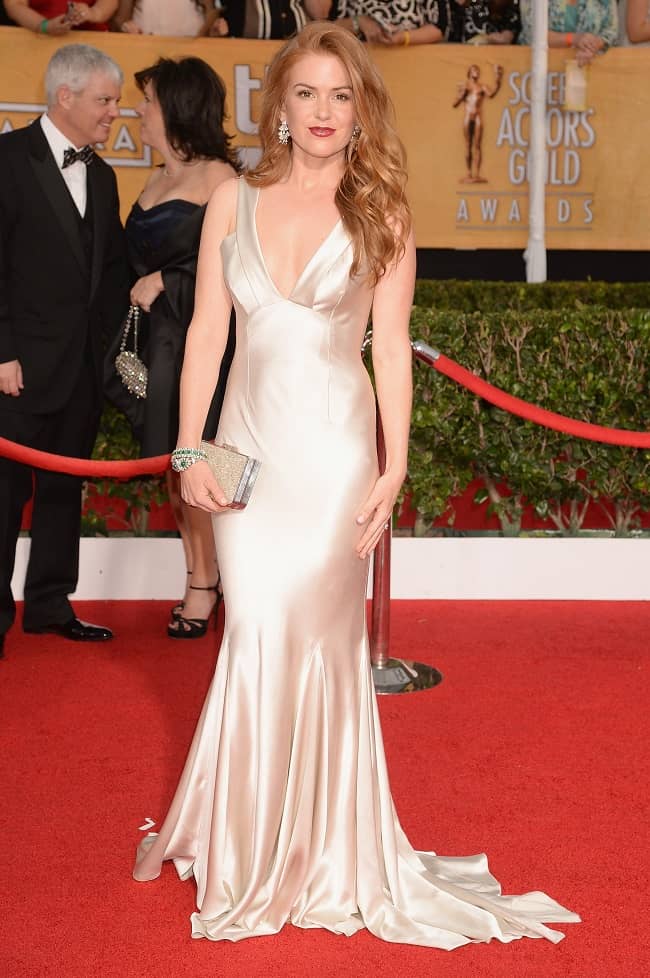