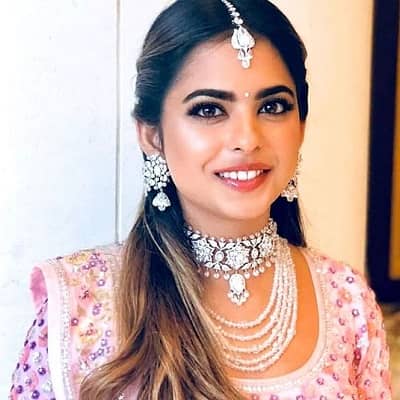 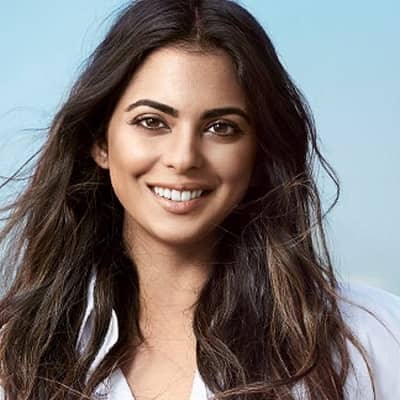 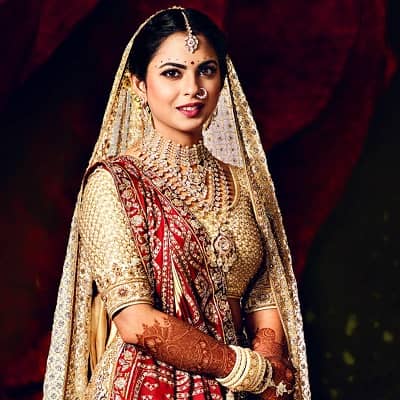 Isha Ambani was born on 23 October 1991 and she is currently 30 years old. Her full name is Isha Mukesh Ambani. Isha’s hometown is Mumbai, India, and her zodiac sign is Scorpio. Talking about her family, Isha comes from a billionaire business family. Her parents are her father Mukesh Dhirubhai Ambani and her mother Nita Ambani. Likewise, Isha has two brothers Akash Ambani and Anand Ambani. 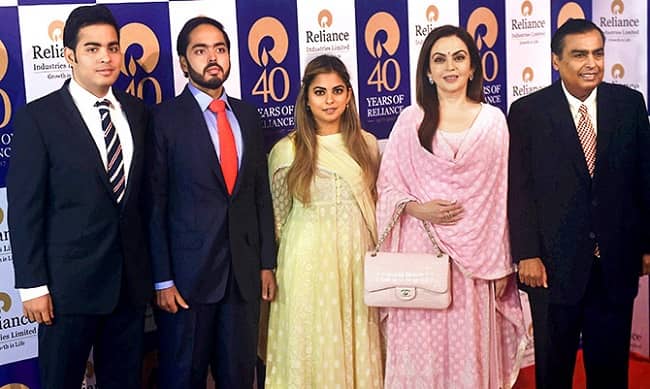 Caption: Isha Ambani posing for a photo with her parents and brothers at an event. Source: Rediffmail

Talking about her educational journey, Isha completed her schooling at Dhirubhai Ambai International School, Mumbai. Later on, she graduated with a degree in Psychology and South Asian studies from Yale University, New Haven, Connecticut, the USA.

Isha has also attended Stanford Graduate School of Business in California, the USA, from where she holds an MBA degree. Likewise, the billionaire daughter is a vegetarian and her family is of Gujarati Modh Bania background.

Born into a billionaire family, Isha Ambani herself is also a businesswoman. She owns the management consulting firm, McKinsey & Company. Isha is likewise the director of Reliance Jio and Reliance Retail.

Her father is a famous Indian billionaire and business. Her father, Mukesh Ambani, is also the chairman, managing director, as well as the largest shareholder of Reliance Industries Ltd. It is a Fortune Global 500 company as well as India’s most valuable company by market value. As published by Forbes, Isha’s father is Asia’s richest person with a net worth of  $84.5 billion. Likewise, Mukesh is also the world’s 10th richest person as of 22 May 2021. 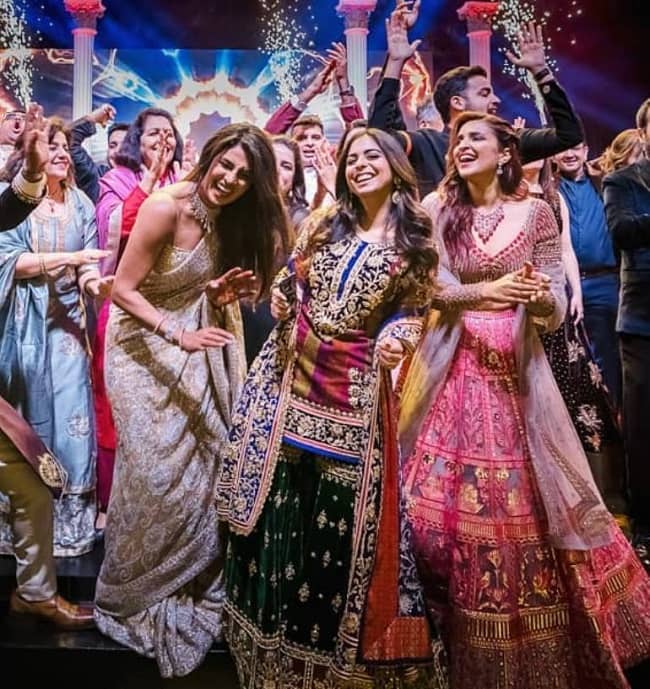 Moreover, Isha’s mother – Nita Mukesh Ambani (née Dalal) – is a famous philanthropist from India. Her mother is additionally the chairperson and founder of the Reliance Foundation. Nita also founded the Dhirubhai Ambani International School and works as the director of Reliance Industries. Moreover, Isha’s mother is an art collector as well as the owner of the Mumbai Indians, an Indian Premier League cricket team.

Furthermore, Isha’s mother became the 1st Indian woman to become a member of the International Olympic Committee. India Today listed Nita among the 50 high and mighty Indians in 2016. Likewise, Forbes listed Isha’s mother as one of the most influential women business leaders in Asia.

Talking about her paternal grandfather, Dhirubhai Ambani, he lived from 28 December 1932 to 6 July 2002. Isha’s grandfather was also a successful Indian business tycoon as well as the founder of Reliance Industries. Her grandfather was posthumously honored in the year 2016 with Padma Vibhushan. It is India’s 2nd highest civilian honor and it was given to him for Dhirubhai’s contributions to trade and industry.

Moreover, Isha’s uncle, Anil Ambani, is also a businessman as well as a politician. Anil served in the Rajya Sabha as an Independent MP between 2004 and 2006. Rajya Sabha is the upper house of the Parliament of India from Uttar Pradesh. Isha’s uncle was once the 6th richest person in the world. However, in February 2020, Anil Ambani declared before a UK court that his net worth is zero and he is bankrupt. However, the veracity of Isha’s uncle’s claim is in question. 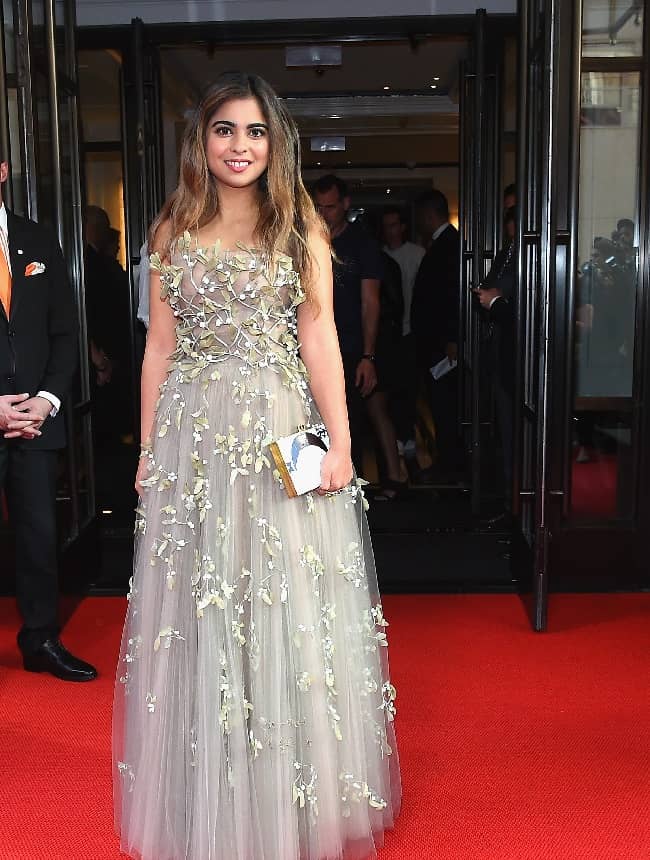 Caption: Isha Ambani posing for a photo in a beautiful dress. Source: The Knot News

Isha Ambani is married to Anand Piramal. The lovers tied the knot on 12 December 2018. Prior to their wedding, Isha and Anand had their engagement on 7 May 2018. The couple had their ceremony at Isha’s family home, Antilia. Antilia is a private residence that Isha’s family owns in the billionaires’ row of Mumbai, India.

Isha’s family moved into his huge house in the year 2012. This house/mansion has 3 helipads, 27 stories, a 50-seat theatre, air traffic control, terrace gardens, swimming pool, a 168-car garage, spa, health center, a ballroom, 9 high-speed elevators, a temple, and a snow room among others. Moreover, Isha’s family mansion is one of the world’s largest and most elaborate private homes. This mansion is further designed to withstand a magnitude 8 earthquake.

Talking about her parents’ relationship, Mukesh and Nita tied the knot in 1985. Her parent met each other after her paternal grandfather attended a dance performance which Nita took part in and thought of the idea of arranging a marriage between the two. 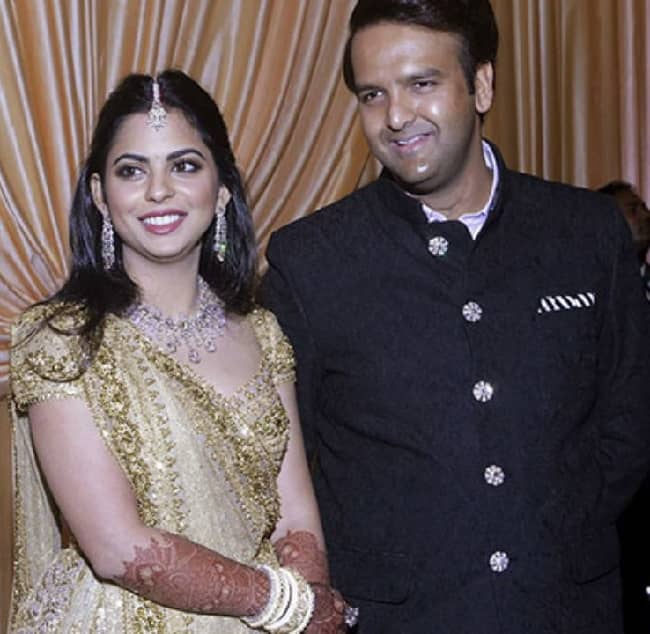 Caption: Isha Ambani posing for a photo with her husband Anand Piramal. Source: The Live Mirror

Isha Ambani stands tall at an approximate height of 161 cm or 5 feet 3 inches and her weight is around 55kg or 121 lbs. Likewise, the billionaire daughter’s chest-waist-hip measures are 32-28-34 inches respectively. Moreover, Isha has dark brown eyes and hair of the same color.

Talking about her social media presence, Isha Ambani is available on Instagram under the username @isha.ambaniofficial with over 75.9k followers. However, she also has a private account under the username @_iiishmagish. When actress Priyanka Chopra tagged Isha in her wedding photographs, she tagged Isha with the username @_iiishmagish, which has only 657 followers. Hence, it is unclear whether the former Instagram account (@isha.ambaniofficial) is Isha’s authentic account or not.

Moving on, Isha Ambani has a net worth estimation of around $100 million US dollars. She comes from one of the wealthiest families in the world whose family fortune is estimated at more than $80 billion US dollars as of August 2020.