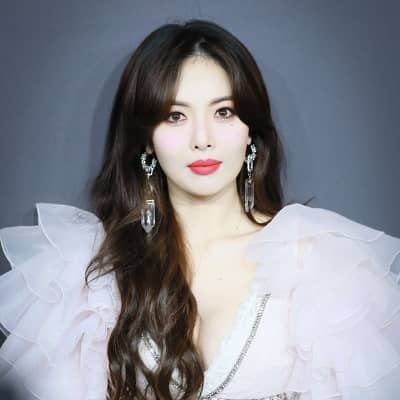 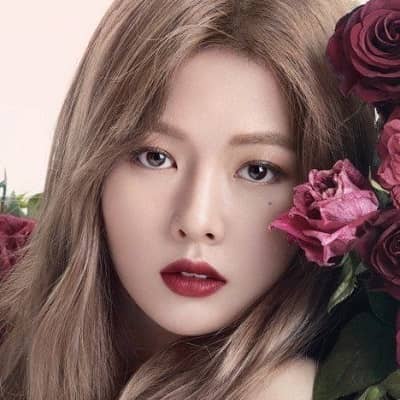 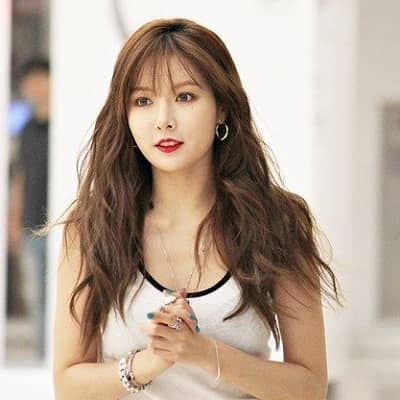 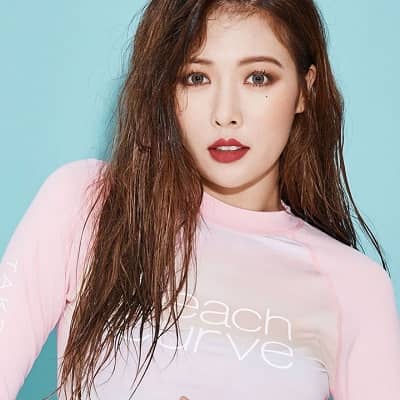 Hyuna is a prominent South Korean rapper, singer-songwriter, and model. Hyuna is internationally famous as a former member of the girl groups Wonder Girls and 4Minute. She was also a part of the duo Trouble Maker and the trio Triple H. She also gained fame for appearing in PSY’s Gangnam Style music video.

Hyuna was born on June 6, 1992, and she is currently 30 years old. Hyuna’s hometown is Jeolla, South Korea, and her zodiac sign is Gemini. Likewise, her full name is Kim Hyun-ah. It is written in Korean as 김현아 and in Hanja as 金泫雅.  Her Chinese name translates to Xuàn Yǎ, which she previously wrote as 泫我 meaning “I weep”.

However, her Chinese teacher recommended she use the previous characters rather than the latter as it sounded quite bizarre. Hyuna agreed to her teacher’s recommendation and used it for her promotional activities in Taiwan as it also sounded adorable. Talking about her family, Hyuna has two younger brothers whereas their parents are divorced.

Talking about her educational journey, Hyuna attended Choongam Middle School and later Korea High School of Music and Arts. She then attended Konkuk University graduating with a degree in Contemporary Arts. She previously received special admission into this school.

Hyuna is a promising rapper, singer-songwriter, and model currently signed under PSY’s company “P Nation”. The other artists in PSY’s company are Jessi, Dawn, Crush, and Heize. Hyuna is also internationally famous as a former member of the girl groups Wonder Girls and 4Minute.

Under her new agency, Hyuna joined the girl group 4Minute debuting in June 2009. This girl group soon became one of the most popular girl groups in the country. Then in the year 2010, Hyuna started off her solo career. She dedicated her career to a style Hyuna described as performance-oriented music. Hyuna’s debut single is Change and it charted at #2 on Gaon Digital Chart. 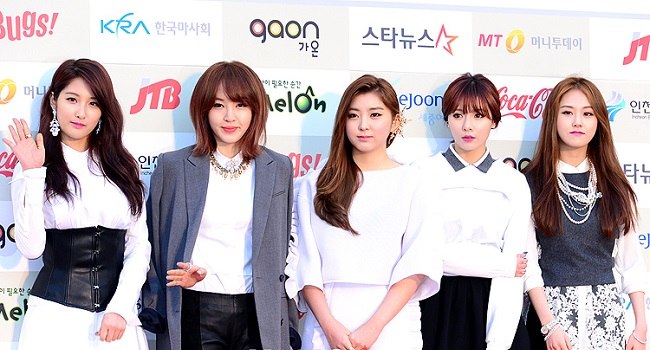 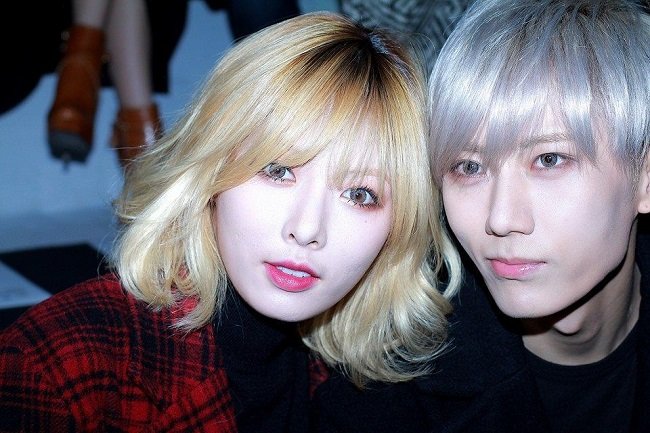 Caption: Hyuna posing for a photo with Hyunseung, her partner for the duo Trouble Maker. Source: Pinterest

The duo released their hit single Trouble Maker on December 1, 2011. In the year 2012, Hyuna appeared in a successful duet rendition of Psy’s worldwide hit Gangnam Style. Later on, the famous singer released her 2nd EP Melting. This EP included the #1 single Ice Cream.

Hyuna’s next successful EPs were A Talk and A+. From these EPs, the successful singles are Red and Roll Deep respectively. Her girl group 4Minute, unfortunately, disbandment in mid-2016. Following this event, Hyuna released her 5th EP called Awesome. Hyuna’s 1st concert tour, The Queen’s Back, followed the release of this EP.

Moreover, in the year 2017, Hyuna became a part of the trio Triple H. The other members of the trio were Pentagon members Hui and E’Dawn. After her activities with Triple H, Hyuna released her 6th EP Following.

Moreover, in the year 2018, Hyuna ended her contract with Cube Entertainment. She then signed with PSY’s P Nation the next year. Under the new label, Hyuna released her first digital single Flower Shower. This single then went on to become her 7th top-ten entry on the US Billboard World Digital Song Sales. Recently, in 2021, Hyuna released her 7th EP I’m Not Cool.

In the year 2007, Hyuna hosted the music TV program Show! Music Core. During this, her co-hosts were Wonder Girls’ Sohee and Brian Joo. Then from 2009 to 2010, Hyuna was a cast of G7 members in Invincible Youth. The singer then partnered with Nam Kee Yong in 2011 for the dance competition TV show Dancing with the Stars.

Hyuna was also a cast member of Birth of a Family 2 and Triple H Detective Agency in 2012 and 2017 respectively. Then from 2017 to 2018, the famous singer became a mentor in the TV show The Unit: Idol Rebooting Project.

She  is currently in a romantic relationship with E‘Dawn. E’Dawn is also a South Korean rapper and songwriter formerly famous as E’Dawn whereas his full name is Kim Hyo-jong. He is also a former member of the South Korean boy band Pentagon. Both of them were the former labelmates of Cube Entertainment. 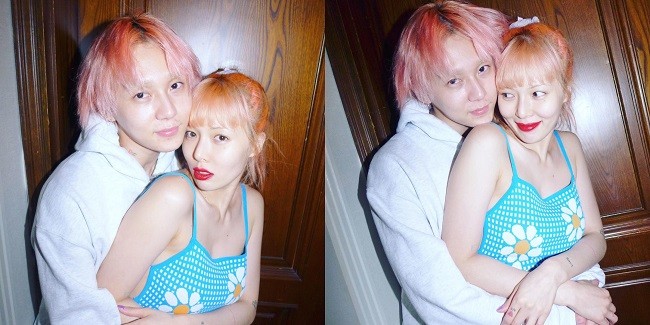 Caption: Hyuna posing for a photo with her lover, E’Dawn. Source: Instagram

The couple went public with their celebrity relationship on August 2, 2018. Hyuna herself revealed that they have been dating since May 2016. Following this revelation, their former agency, Cube, removed both of them the very next day. However, the label withdrew the decision, and She ended her contract soon after. At present, the lovers are once again labelmates at PSY’s P Nation since January 27, 2019.

She has a height of 164 cm or 5 feet 4 inches and a weight of around 44 kg or 96 lbs. Likewise,She has a chest-waist-hip measure of 34-25-34 inches respectively and her blood type is “O”. Further, the famous singer has dark brown eyes and hair of the same color.

Likewise, She has multiple tattoos. One of them is on her left shoulder that says “My mother is the heart that keeps me alive”. She also has two others in Latin on her right inner arm and her lower back. Hyuna also has a cross on her left underarm and the Hebrew word for faith on her right shoulder. Further, She has tattooed a red heart on the back of her right ear.

Moreover, She shared information regarding her health via her Instagram post on November 28, 2019. As per her post, She was diagnosed with depression and panic disorder in 2016. Likewise, the singer experienced fogginess and vision and collapsing. As the singer thought these were the symptoms of panic disorder, She ignored it. Later on, after seeing a doctor, She received a brain wave test that concluded and was diagnosed with vasovagal syncope.

Talking about her social media presence, She joined Twitter in November 2010 and so far has over 395.2K followers on her @4M_hyunah account. Likewise, she goes by the username @hyunah_aa on Instagram and has earned over 15.7 million followers as of May 2021. She is also available on Tiktok under the username @hyunaofficial. The singer has earned over 2.5 million followers and 15.2 million likes on this platform. 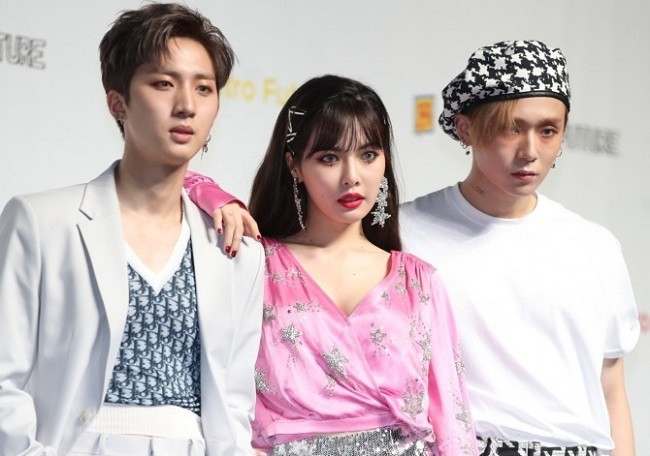 Caption: Hyuna posing for a photo with Hui and E’Dawn as a part of Triple H. Source: Kpop Herald

Furthermore, She has over 3.1 million people following her journey on her Facebook page. Her official Youtube “HyunA” channel has garnered over 2.46 million subscribers and 280 million views since September 3, 2019. Moving on, Hyuna has a net worth estimation of approximately $10 million US dollars.