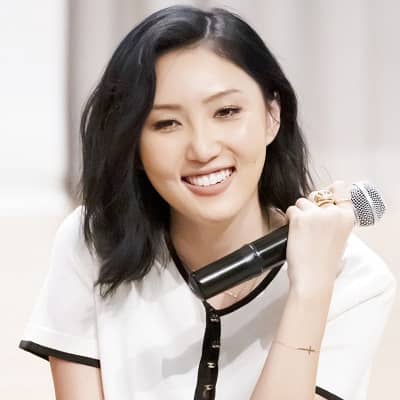 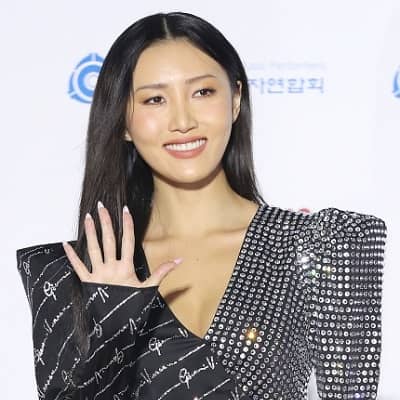 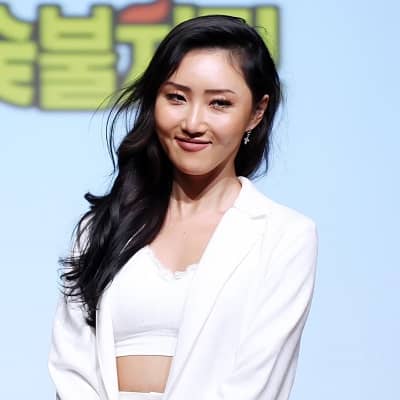 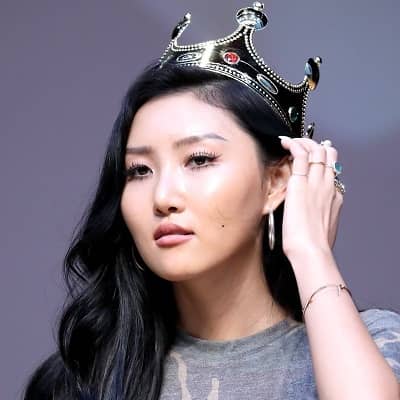 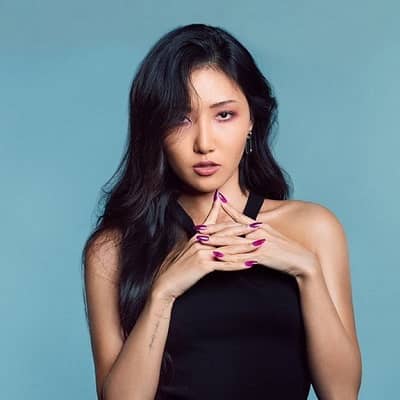 Hwasa is a young and prominent South Korean singer-songwriter, rapper, composer, and TV personality. Hwasa is internationally famous as a member of Mamamoo and Refund Sisters (환불 원정대).

Hwasa was born on July 23, 1995, and she is currently 25 years old. Her hometown is Jeonju, Jeollabuk-do, North Jeolla, South Korea, and her zodiac sign is Leo. Her birth name is Ahn Hye-jin (안혜진/安惠眞) whereas Hwasa or Hwa Sa (화사/華奢) is her stage name.

Likewise, Hwasa has two elder sisters. However, her family’s identities have not been revealed. Talking about her educational journey, Hwasa is a graduate of Wonkwang Information Arts High School. 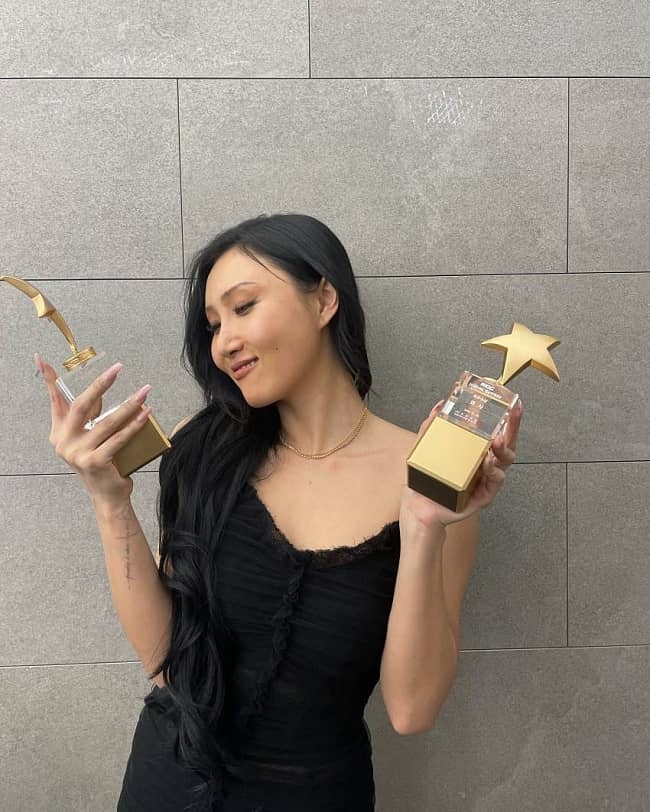 Caption: Hwasa posing for a photo in her awards. Source: Instagram

Professionally, Hwasa is a popular singer-songwriter, rapper, composer, and TV personality. Her talent management company is RBW and is more popular as a member of the girl group “Mamamoo”. The other members of this girl group are Solar, Moonbyul, and Wheein. The girls made their music debut with their single Mr. Ambiguous on June 18, 2014.

Likewise, in April 2018, the singer joined Hyena on the Keyboard. It is a KBS reality TV show and Hwasa was a cast member of this show. This project resulted in Hwasa’s collaboration with rapper Loco for the song Don’t. The singer also took part in writing and composing this song. The same year, Hwasa bagged the “Rookie Female of the Year in Variety” award. She also took home the MBC Ent. award. Hwasa received these awards for her work on the variety show, I Live Alone.

Later, Hwasa made her solo debut in February 2019. Her solo debut single is Twit. For this single, Hwasa was also a writer and composer. Moreover, this song scored a “Triple Crown”. That means the song topped the Gaon Digital, Gaon Download, and Gaon Streaming charts. The young singer then released the song In The Fall in October 2019. This is a collaboration with the popular hip-hop producer Woogie. 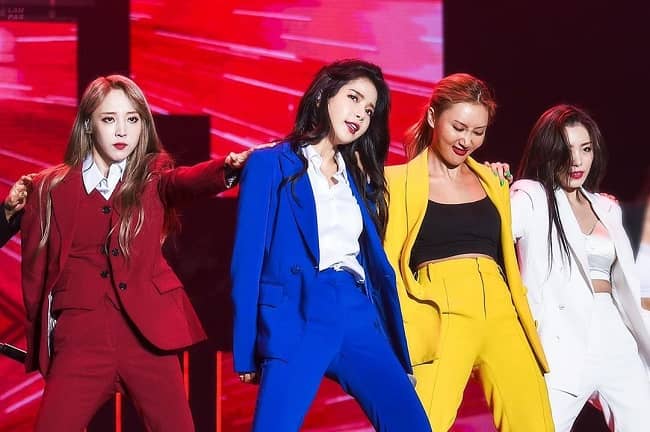 Then in March 2020, the young singer teamed up with English singer Dua Lipa for the latter’s Physical song remix. This remix version includes added Korean lyrics too. In April, there was an announcement that Hwasa would join the original soundtrack lineup of The King: Eternal Monarch.

Likewise, Hwasa released her debut EP called Maria in June 2020. This EP debuted at #7 on the Billboard World Albums. This album also ranked #81 on Billboard Top Current Albums Sales charts. These achievements were for the week of 11 July 2020. Moreover, Maria ranked #1 in 20 countries on the iTunes Album Chart around the world.

Subsequently, the singer became the 1st Korean female solo artist to rank on top of the United States iTunes Albums Chart following Maria. The singer wrote the lyrics for the song LMM as well as composed Why from the album “Maria”.

On Hidden Singer Season 6, Hwasa was one of the contestants for the episode that aired on 11 September 2020. It is an entertainment show on JTBC. Moreover, the singer also joined the cast of How Do You Play? in August 2020. It is an MBC reality-variety show. On this show, Hwasa appeared as a member of the four-member supergroup “Refund Sisters (환불 원정대)”.

The members of this supergroup are Lee Hyo-ri, Uhm Jung Hwa, and Jessi. Moreover, the girls made their debut on October 10, 2020, with the single Don’t Touch Me. Prior to all her fame, several South Korean artists recognized Hwasa’s talent. She was only 16 years old when she got featured on Solbi and the band Standing Egg’s songs. This was before Hwasa’s debut as a singer. 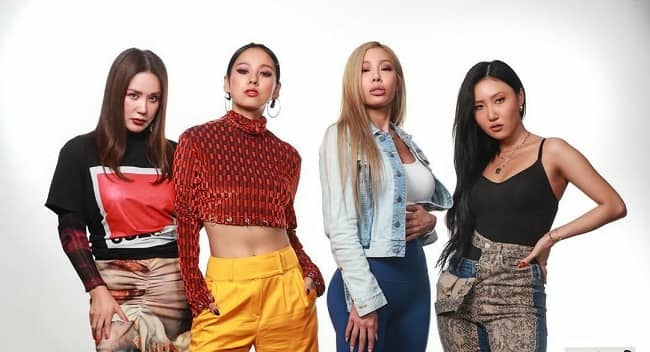 Caption: Hwasa posing for a photo as a part of Refund Sisters. Source: Pinterest

Hwasa is single at present. The Maria singer has not shared any social media posts and announcements regarding this issue. Moreover, Hwasa has a hectic schedule which prevents her from meeting her ideal lover or go on dates. Nevertheless, when the time is right, Hwasa is sure to grab the attention of many young lovers through her charm, talent, and beauty.

Talking about her past relationships, Hwasa has shared in a program that she had one lover in the past. She also mentioned her ideal men to be naive, just like her father, with no greed.

Hwasa stands tall at an approximate height of 1.62 meters or 5 feet 4 inches and her weight is 50 kg or 110 lbs. Other than this, there is no information regarding Hwasa’s other body measurement details like her chest-waist-hip measures, dress size, shoe size, etc. Moreover, Hwasa has dark brown eyes and hair of the same color. 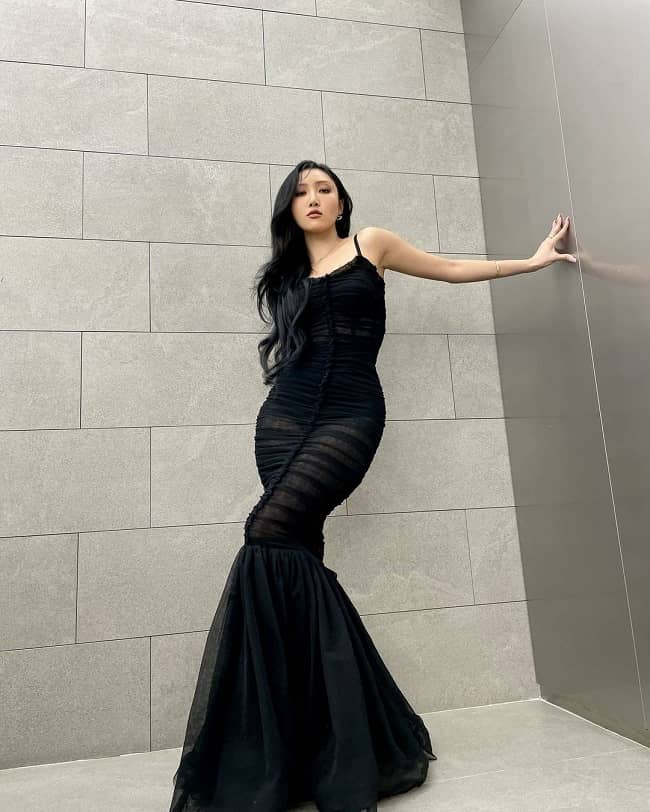 Caption: Hwasa posing for a photo in a beautiful dress. Source: Instagram

Talking about the singer’s social media presence, Hwasa is available on Instagram under the username @_mariahwasa. While writing this biography (May 2021), this account has earned over 6 million followers. Other than this, Hwasa doesn’t have personal accounts on other platforms.