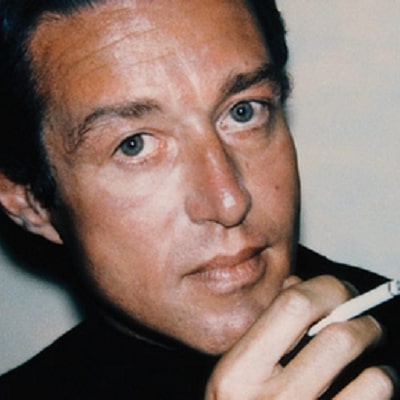 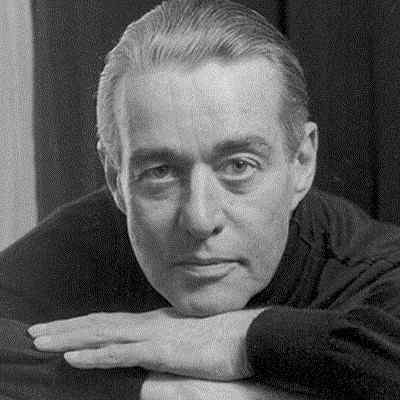 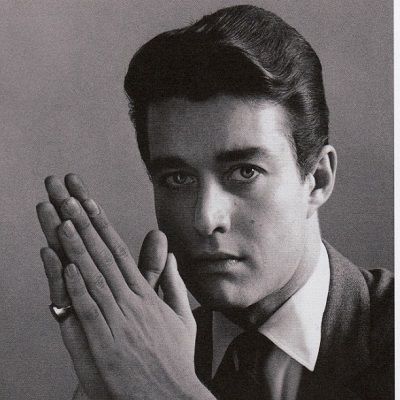 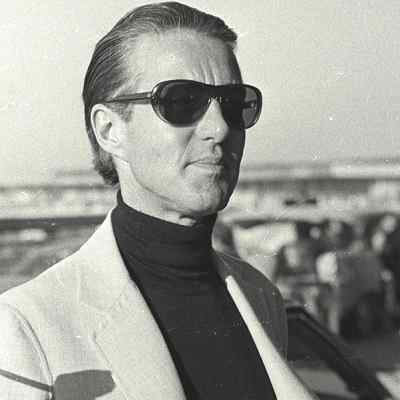 Halston was an American fashion designer. Halston is a celebrated name and a brand itself who rose to fame in the 1970s. He primarily gained fame for his excellent work with hats and later went on to gain popularity for his dress creations, especially for women.

Halston was born on April 23, 1932, and he was originally from Des Moines, Iowa, the U.S. He later moved to Evansville, Indiana, at the age of ten. Unfortunately, he passed away on March 26, 1990, aged 57 years. Talking about his family, Halston’s father is James Edward Frowick and his mother is Hallie Mae (née Holmes).

His father is a Norwegian-American accountant whereas his mother is a stay-at-home wife. Moreover, Halston had two siblings. His elder brother’s name is Donald E. Frowick whereas his sister’s name is Sue Frowick Watkins.

Further, Halston’s full name is Roy Halston Frowick but he later dropped his first and last names. He rather preferred the moniker. Halston developed an interest in sewing from an early age. He started by creating hats and altering clothes for his mother and sister. Also, Halston’s first hat appeared on the cover of Harper’s Bazaar in the year 1960.

Talking about his educational journey, Halston graduated from Benjamin Bosse High School in the year 1950. He also briefly attended Indiana University and later enrolled at the School of the Art Institute of Chicago. While attending night courses at the Art Institute, Halston worked as a fashion merchandiser at the upscale chain department store called “Carson Pirie Scott”. 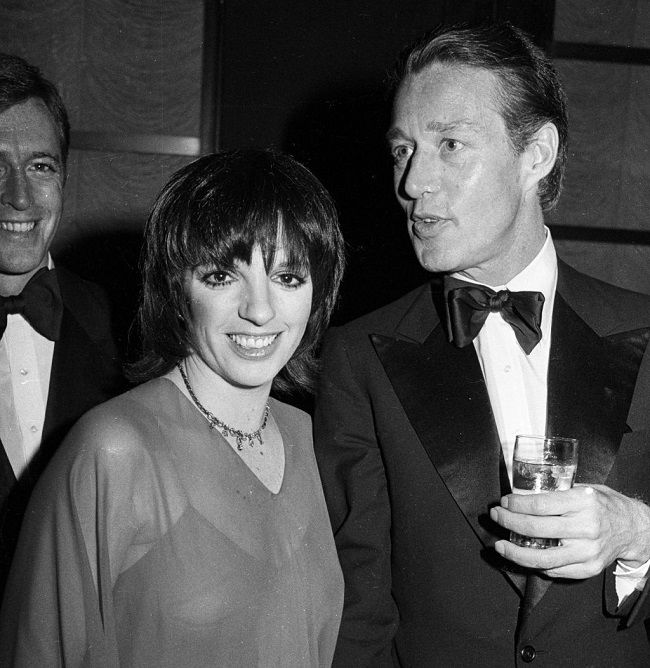 Caption: Halston photographed with his actress and singer friend Liza Minnelli during an event. Source: Pochta

Professionally, Halston was a fashion designer and he rose to international fame in the 1970s. Halston’s minimalist and clean designs often made of cashmere or Ultrasuede were a new phenomenon in the mid-1970s discotheques and redefined American fashion.

Halston was popular for creating a relaxed urban lifestyle, especially for American women. He was also often photographed at Studio 54 with his close friends Liza Minnelli, Bianca Jagger, and artist Andy Warhol. Moreover, in the early 1950s, Halston began a business designing and making women’s hats while still attending the School of the Art Institute of Chicago.

Later, after he had gained a well-known clientele, Halston went on to open a store on Chicago’s Magnificent Mile in the year 1957. Later on, he went on to become the head milliner for high-end New York City department store “Bergdorf Goodman”.

Further, Halston’s fame rose even further when he designed the pillbox hat that Jacqueline Kennedy wore to the inauguration of  President John F. Kennedy in 1961. Then in the late 1960s, Halston made the transition to women’s clothing. He opened a boutique on Madison Avenue in New York and started a ready-to-wear line.

Soon, his friends and clients included some of the most alluring and well-known women in the world. This included Rita Hayworth, Liza Minnelli, Marlene Dietrich, and Diana Vreeland among many others. Further, Halston was nominated for Broadway’s 1978 Tony Award as Best Costume Designer for “The Act.”

After several ill-advised business decisions, he eventually lost control of his fashion house in the 1980s. After a decade of this event, Halston, unfortunately, passed away due to AIDS-related cancer. He was only at the age of 57 years at the time of demise. 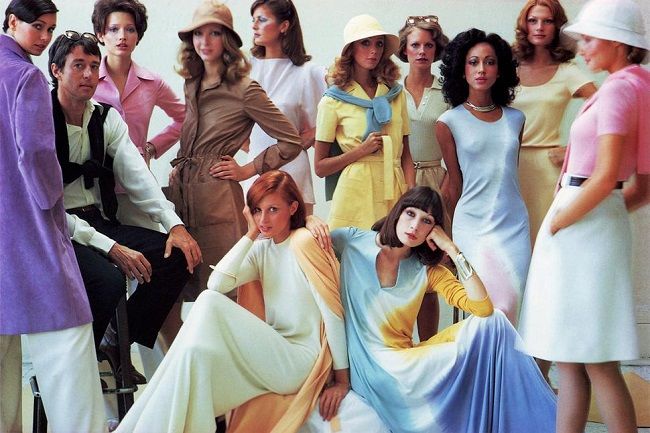 Caption: Halston photographed with his muses for US Vogue in the year 1972. This also includes actress Angelica Huston. Source: Viva/Duane Michals

Halston’s hat designs brought the fantastic to whimsy. Likewise, he used all manner of jewels, flowers, and fringe to decorate hoods, bonnets, and coifs. He began designing women’s wear in 1966, offering a perfect look for the international jet set of his era. His line of clothing was popular for sexy, yet elegant pieces.

In the fall of 1972, Halston introduced a simple shirtwaist dress made from Ultra suede. It is a fabric that was washable, durable, and beautiful. Two years later, Halston also offered the world his most iconic design. It was a halter dress. The halter dress was an instant hit in America’s discotheques. This dress gave women a narrow, elongated silhouette. Additionally, his trademark sunglasses were wearable both day and night and this completed the look.

Halston was famous as the first designer to fully license himself as a brand onto itself. Moreover, his influence went beyond style to reshape the business of fashion. Through a licensing agreement with JC Penney, Halston then created designs that were accessible to women at a variety of income levels. He also became influential in uniform design. He went on to change the entire feel of Braniff International Airways’ staff uniforms.

Moreover, Halston’s designs became omnipresent as he went on to design and license his name on thirty-one different licensing products. This included a range of home linen, uniforms for Braniff International Airlines, and a line of luggage for “Hartmann”.

Throughout most of the seventies, Halston epitomized the glamour as well as the decadence of the era. He then went on to become a central figure in the nightlife scene of New York’s Studio 54 disco. Further, he went on to create one of the best-selling fragrances of all time. It is in his signature tear-drop shaped perfume bottle designed by Elsa Peretti.

“Halston” after his demise

Since his death, numerous owners and designers have reinvented the “Halston” label. However, none of them lasted long. This was the case until Harvey Weinstein followed advice from stylist Rachel Zoe and bought the label along with Jimmy Choo. Choo is the founder Tamara Mellon and the two of them bought it in March of 2007.

After they bought the label, they appointed Marios Schwab as the creative director in May 2009. Then in the year 2009, Halston label launched a diffusion line called “Halston Heritage”. For this, they made Sarah Jessica Parker as the president and chief creative officer in January 2010.

However, there were reports in July 2010 that Parker, Weinstein, and Schwab were no longer working at either of Halston’s label. At present, the Halston Label is led by Chief Creative Officer Robert Rodriguez. This label continues to evolve the HALSTON legacy. It is a luxury lifestyle brand that mixes legacy codes with a modern edge to create an effortless collection of women’s ready-to-wear and dresses.

In spite of his achievements, Halston’s increasing drug use and failure to meet deadlines undermined his success in the fashion industry. Then in 1984, Halston was fired from his own company. Subsequently, he lost the right to design and sell clothes under his own name.

However, Halston still continued to design costumes for his friends Liza Minnelli and Martha Graham. He died of lung cancer and complications of AIDS in San Francisco, California, in the year 1990.

Talking about his love-life before his untimely demise, Halston was in an on-again-off-again romantic relationship with Victor Hugo. Hugo is the Venezuelan-born artist. The two met while Hugo was working as a make-up artist in the year 1972.

They began a relationship and Hugo lived on and off in Halston’s home. Soon, Halston hired his lover to work as his window dresser. The duo’s on-and-off relationship lasted for a little over ten years. According to The New York Times, Halston had an affair with fashion designer Luis Estevez. 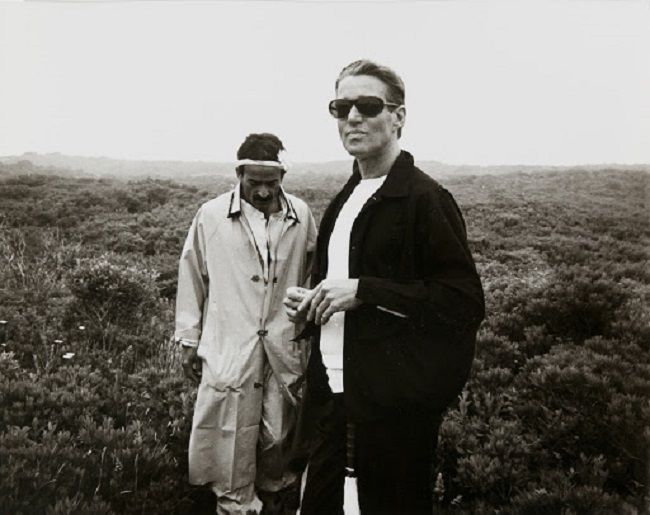 Caption: Halston captured withe the Venezuelan-born artist Victor Hugo with who he had on-and-off relationship for a decade. Source: Pineshistory

In the year 1988, Halston tested positive for HIV. After his health began to fail, Halston moved to San Francisco and there he was cared for by his family. Then on March 26, 1990, at aged 57 years old, Halston died of Kaposi’s sarcoma. It is an AIDS-defining illness. He passed away at the Pacific Presbyterian Medical Center in San Francisco.

In June 1990, Liza Minnelli sponsored a tribute at Lincoln Center’s Alice Tully Hall. This event followed a reception hosted by his friend Elsa Peretti. Likewise, in the year 2010, Halston was the subject of the documentary Ultrasuede: In Search of Halston.

Moreover, from November 2014 to January 2015, Warhol Museum sponsored a traveling exhibition entitled Halston and Warhol Silver and Suede. Also, Halston’s niece Lesley Frowick co-curated this exhibition. Then from February to April 2015, the museum of the Fashion Institute of Technology in New York City held an exhibition. This was to celebrate Halston’s 1970s fashions. 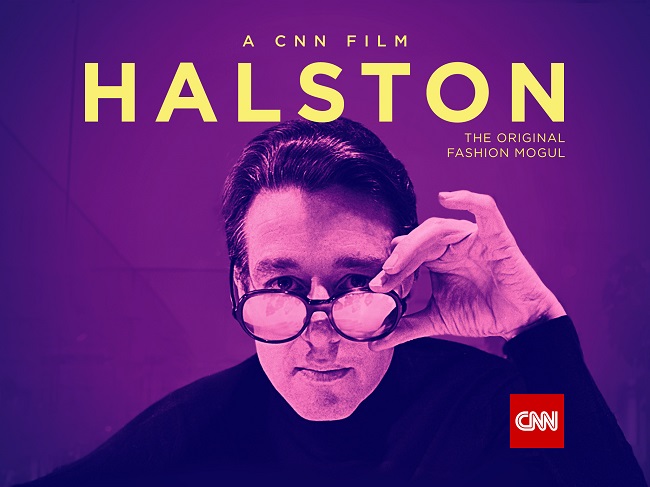 Additionally, Halston Style, a retrospective of his career, opened at the Nassau County Museum in March 2017. Halston’s niece Lesley Frowick curated the retrospective and it features material derived from his personal archives that he gave to Lesley before his death. Lesley Frowick also authored the accompanying catalog called Halston: Inventing American Fashion.

Frédéric Tcheng also directed the documentary called Halston and they released it in August 2019. This documentary revived interest in Halston and The Halstonettes. Then in May 2019, The New York Times released an article, Halston’s Women Have Their Say. This article outlined many of the Halstonette women reflecting on their experience. CNN published a similar article in August of the same year. The article is titled Free Inside Our Clothes: Top Models Remember What It Was Like to Walk a Halston Show.