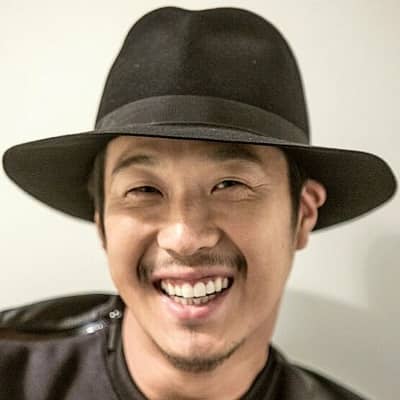 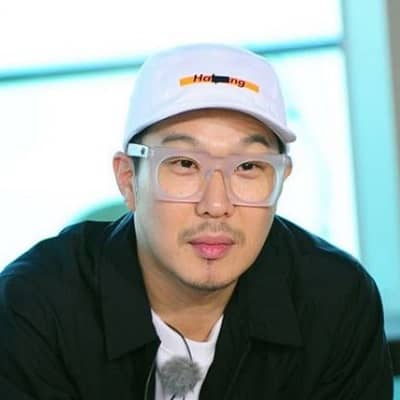 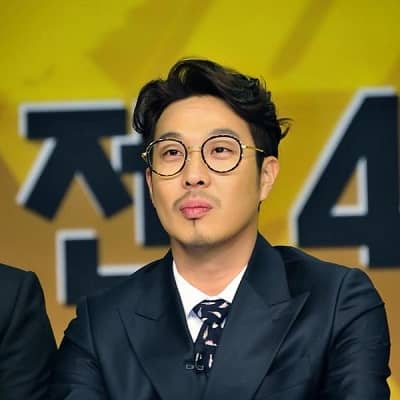 Haha is a noteworthy South Korean singer and host born in West Germany. Haha is famous for being the co-host of numerous variety shows including “Running Man”, “Nonstop”, “Infinite Challenge” and “What’s Up YO!” among others.

Haha’s real name is Ha Dong-hoon, written in his native language as 하동훈 and in Hanja as 河東勳. He was born on August 20, 1979, in Stuttgart, Baden-Württemberg, West Germany. He is currently 41 years old and his zodiac sign is Leo.

Although born in West Germany, he was an infant when his family moved to Seoul, South Korea. Talking about his family members, both of his parents are Korean. His mother is Kim Ok Jung and she holds a doctorate in Psychology. Likewise, he has an elder sister named Ha Juri (하쥬리). Juri is a pianist and also holds a doctorate. Talking about his own educational journey, he obtained his master’s degree from Daejin University. His specialization is in Drama and Fine Arts. 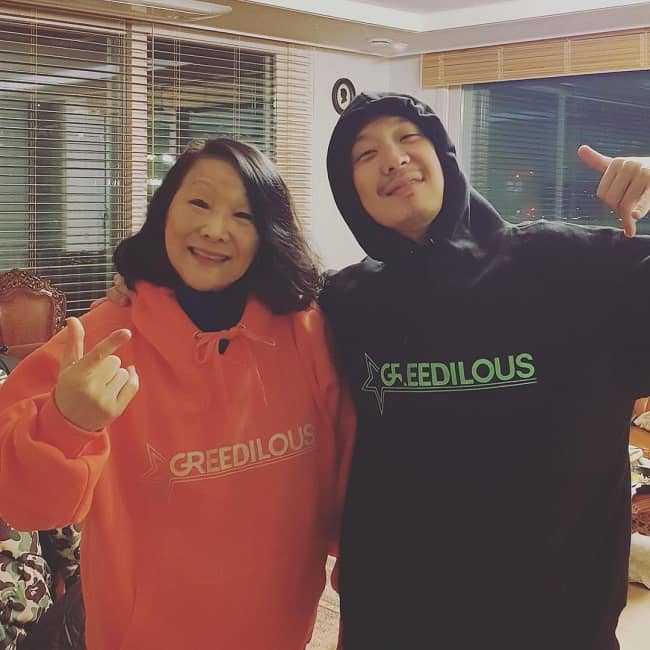 Caption: Haha posing for a photo with his mother. Source: Instagram

Professionally, Haha is an outstanding singer and variety show host. He is also a member of RGP. RGP is formally called Skull & Haha. They are a duo who debuted on July 30, 2012, with their song Ya Man!! Moreover, he is most famous for appearing in Nonstop, a sitcom. The singer is also famous for co-hosting two popular variety programs namely Infinite Challenge and Running Man.

He was also the host for his own show Ya Man TV. It aired on Mnet in the year 2015. The singer received the award for the “Best Entertainer”. It was at the SBS Entertainment Awards in the year 2011. Moreover, the singer took home this award for this role in Running Man. In the same ceremony, he performed his single Rose.

Talking about the beginning of the singer’s career in the entertainment industry, he debuted as a singer and rapper in the year 2001. It was with the boyband, Z-kiri. However, the band disbanded after a short while. Following this, he co-hosted What’s Up YO! in 2002. 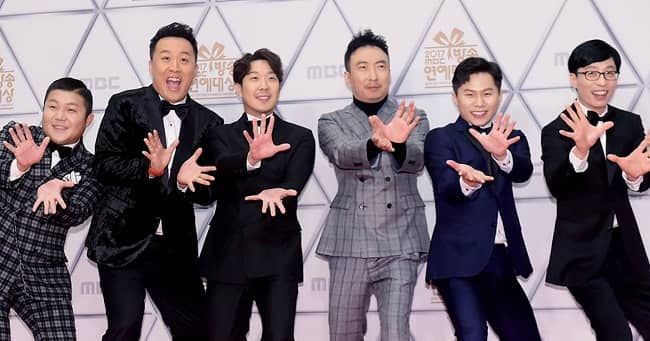 Caption: Haha posing for a photo with the core casts of ‘Infinite Challenge’. Source: Koreaboo

While hosting What’s Up YO!, Haha developed a close friendship with his co-hosts MC Mong and Jerome To. They later became famous as the “What’s Up Trio” due to their strong friendship on-screen. Joining Nonstop as the main cast until the year 2003 gained him wider recognition for his acting and comedy skills.

After leaving Nonstop, the singer spent two years alongside singer Taw. They jointly prepared and recorded his debut album The Beautiful Rhyme Diary. They released the album on February 18, 2005. Along with his debut album, they also released his debut single Love Song.

The singer appeared as a guest on X-man on May 22, 2005. On the show, he imitated his close friend Kim Jong-kook. For his imitations, he gained huge popularity. This popularity welcomed him another opportunity to appear as a cast of Infinite Challenge by December 2005.

After leaving Nonstop, he returned to the show again in the year 2006. He appeared as a guest for the 6th and final season, In the year 2007, he released You’re My Destiny. It is the singer’s 2nd single. The singer also joined the show Happy Shares Company. He appeared as one of the co-hosts on this show until February 2008. 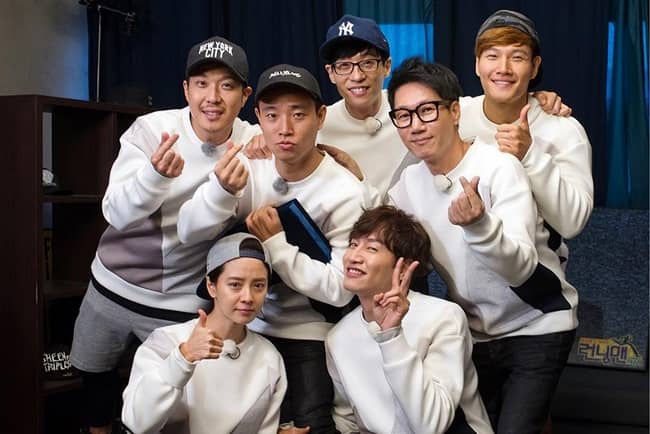 Caption: Haha posing for a photo with the castmates of ‘Running Man’. Source: The Jakarta Post

Haha temporarily left Infinite Challenge in February 2008. This was so that the singer could serve his national service in the army. During his service, he collaborated with a new group “Davichi”. He collaborated on the group’s song Love and War. The singer completed his service after 24 months and was discharged from the military on March 11, 2010.

Following his discharge from the mandatory service, he returned as a cast of Infinite Challenge. He actually accepted the requests from the fellow co-hosts, Yoo Jae-suk and Noh Hong Chul. Additionally, the singer also made regular guest appearances on Come to Play. It is the fellow co-host Yoo Jae-suk’s talk show. Moreover, he also co-hosted the Haha-Mong Show with MC Mong. The duo worked together previously while hosting What’s Up YO!

In the year 2012, Haha continued his career in music. He collaborated with the fellow reggae artist Skull. They worked together on a mini-album Skull & Haha Ya Man. Skull was previously with the first South Korean reggae duo – Stony Skunk.

He and Skull performed one of the tracks from this mini-album Busan Vacance on several TV music shows. Furthermore, the singer also performed this song along with other cast members of Running Man. They performed the song during fan meets for the show.

The same year, he and Gary featured on Kim Jong-kook’s comeback album Volume 7 – Journey Home. The castmates of the Running Man worked together on Hon-kook’s song Words I Want to Say to You from the aforementioned album.

A year later in 2013, he again collaborated with Skull. The duo worked together on a single 돈암동 멜로디 and the EP REGGAErilla. In 2014, Kim Jong-kook and he formed a musical duo called Running Man Brothers. As a duo, he and Jong-kook organized a concert tour in the United States in July and December the same year. Then in the year 2016, the singer collaborated with Skull once again on a single Love Inside. This single also featured Stephen Marley.

Haha is a married man. He shared his vows with Byul on November 30, 2012. The announcement regarding their pending wedding was shared on August 15, 2012. Moreover, his wife is also a popular South Korean singer. He and Byul then welcomed their 1st child, Ha Dream, on 9 July 2013.

On 22 March 2017, the celebrity couple welcomed their 2nd son, Ha Soul. Likewise, the Ha family welcomed him and Byul’s 3rd child on July 15, 2019. This time, the couple welcomed a daughter named

Caption: Haha and his wife Byul during a couple-challenge in ‘Running Man’. Source: Koreaboo

His height is around 172 cm or 5 feet 7 inches. Likewise, the singer’s body weight is around 60 kgs. Other than this, there is no verified information regarding the singer’s other body measurement details like his dress size, shoe size, chest-waist-hip measures, etc. Moreover, he has dark brown eyes and hair of the same color.

He is also active on Tiktok as @haha_official. This account has garnered 479.5K followers and 1.3 million likes. The singer then created his “하하 PD HAHA PD” Youtube channel on April 3, 2020. So far, this channel has gained more than 25 million views and 613K subscribers. Moving on, he has a net worth estimation of around $9 million US dollars.