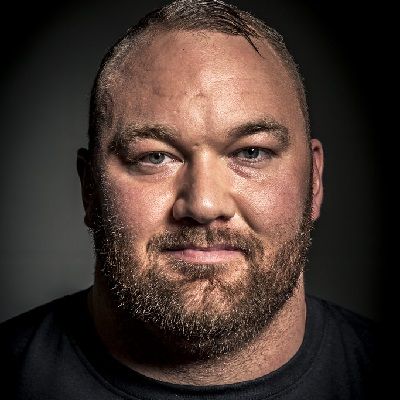 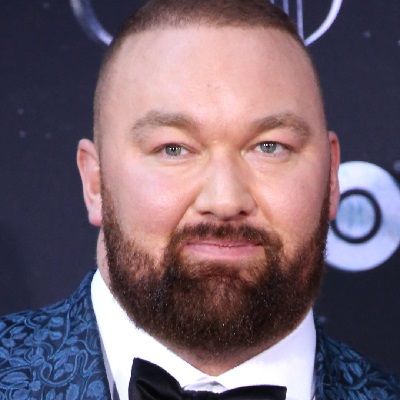 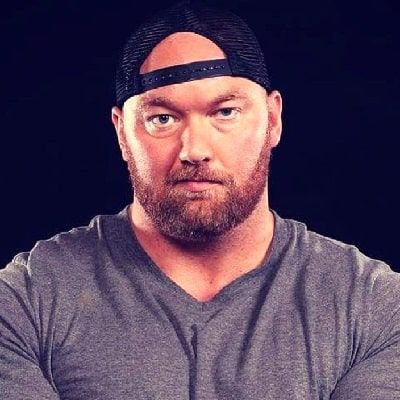 Hafthor Bjornsson is an Icelandic Strongman and actor. Hafthor Bjornsson was also a professional basketball player before his ankle forced him to give up the game. He is best known for his role in the HBO series “Game of Thrones” where he portrays the character of Ser Gregor “The Mountain” Clegane. He played in the GOT series from to 4th to the 8th series.

Hafthor Bjornsson’s full name is Hafþór Júlíus Björnsson and he was born on November 26, 1988. Moreover, he is currently 33 years old and his zodiac is Sagittarius.

His hometown is Reykjavík, Iceland. Moreover, his father’s name is Björn and he stands at 203 cm (6 ft 8 in). Also, his mother’s name is Ragnheiður and she is also tall.

His grandfather, Reynir, recalled in 2014 that Hafþór worked on the family farm outside Reykjavík as a child and was always big, even when he wasn’t tall.

Similarly, he has a sister named Hafdís Lind Björnsdóttir. They are of Icelandic nationality.

However, there is no information regarding his ethnic background. Additionally, he also has nicknames like Thor and The Mountain. 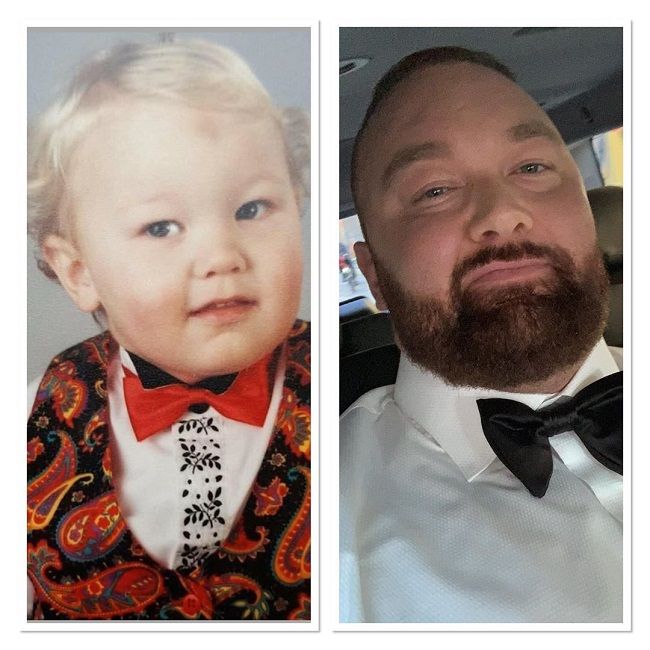 Talking about Hafthor Bjornsson’s relationship status, he is a married man. He wed Kelsey Henson on 21 October 2018.

He announced his marriage with Kelsey through an Instagram post on this day. Kelsey Henson was a Canadian waitress.

Before their wedding, the couple met when Hefthor was in Alberta, Canada for a strongman competition and visited the bar where Henson worked.

It was back in the year 2017. The lovebirds gained a lot of attention due to the difference in their heights. He is super tall while Kelsey is 5’2″ or 157 cm, which is very short in comparison. 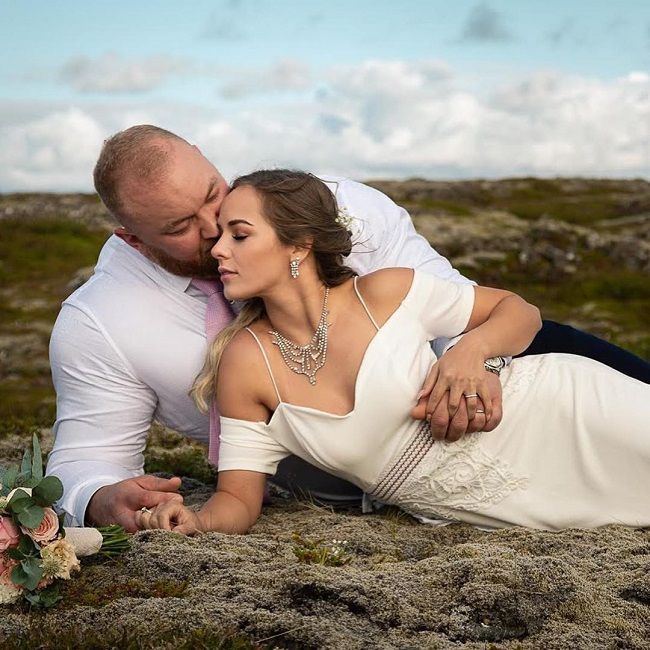 Moreover, he has a daughter named Theresa Líf, with former girlfriend Thelma Björk Steinmann. Until early 2017, he was in a relationship with Andrea Sif Jónsdóttir whom he met at a gym.

The duo lived together in Reykjavik. In an online video interview by Mulligan Brothers published on 21 December 2019, he lamented not having seen his daughter in three years.

Moving on to Hafthor Bjornsson’s body measurements, he stands tall at a height of 2.06 m or 6 feet 9 inches weighing around 193 kgs.

Similarly, his thigh measures up to 32 inches, his arms 20 inches, and his waist 46 inches. He also has several tattoos all over his body.

His tattoos include those about Norse deities and the Viking culture. He also has a tattoo of Jón Páll Sigmarsson on his calf.

He began his athletic career as a basketball player. He was 2.06 m (6 ft 9 in) when he started his senior team career with Division I club Breiðablik in 2004.

He played as a center for this team. In the year 2005, he joined team FSu Selfoss, also in the Icelandic Division I.

After 10 games, he discovered that he had been playing with a broken bone in his ankle and hence he would require surgery.

After recovering from surgery, Hafþór moved to Úrvalsdeild powerhouse KR in the year 2006.

He missed most of the 2006–2007 season after he underwent another surgery to fix the shattered screw in his ankle. For the 2007–2008 season, he moved back to play for team FSu Selfoss.

He averaged 6.7 points per game and helped the team achieve promotion to the Úrvalsdeild.

However, his troublesome ankle forced him to retire from basketball after the season, at the very young age of 20.

Between 2004 and 2006 Hafþór played 32 games for the Icelandic junior national basketball teams.

In the year 2006, he played 8 games with Iceland’s U-18 national team in Division A of the U18 European Championship.

He met Icelandic strongman Magnús Ver Magnússon at his gym Jakaból in the year 2008. It was Magnús who said that he seemed a good prospect as a strongman.

He then won several strongman contests in Iceland in 2010 including “Strongest Man in Iceland”, “Iceland’s Strongest Viking”, “Westfjords Viking”, and five of six events at the “OK Badur Strongman Championships”.

Additionally, he finished in second place at the inaugural “Jón Páll Sigmarsson Classic” in November 2010. The first one at this event was Brian Shaw.

He took part in “World’s Strongest Man” after earning a wild card invitation to the 2011 contest. Overall, he came in the sixth position.

He also finished runner-up in the 2014 event and the title-holder was Žydrūnas Savickas. Later in the 2016 event, he came second place and the one in first place was Brian Shaw.

Later, in 2017, he once again was runner-up. This time he lost to Eddie Hall.

He won the 2018 World’s Strongest Man, and hence became the first Icelander to win the title since Magnús Ver Magnússon in the year 1996. 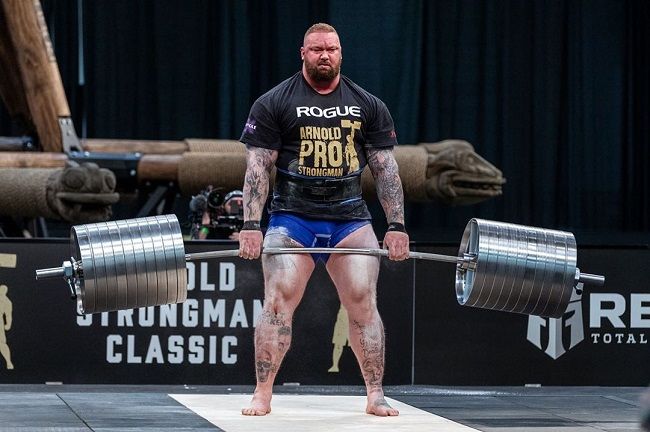 On the 3rd of March 2018, He broke the Elephant Bar deadlift world record with his successful 472 kg (1,041 lb) third attempt, and also became the champion of the “Arnold Strongman Classic” 2018.

Similarly, he defended his title at the Arnold Strongman Classic 2019. He finished on 45 points, which is 4.5 points ahead of runner-up Martins Licis.

He also improved on his elephant bar world record by increasing it to 474 kg (1,045 lb) with his second attempt. He also tried for 501 kg (1,105 lb) in his third attempt but was sadly unsuccessful.

After successfully defending his crown, he became only the second person to win 3 Arnold Strongman Classics in a row (2018, 2019, and 2020) after Zydrunas Savickas.

He played the role of Ser Gregor “The Mountain” Clegane for the fourth season of the HBO series Game of Thrones in August 2013.

This was his first main acting role. Additionally, he is the third person to depict the character after Conan Stevens played the role in season 1 and Ian Whyte in season 2.

He became the first actor to portray Clegane in more than one continuous season. He played the character in seasons four through eight.

Moreover, he was cast for the role of Mongkut in the 2017 film Kickboxer: Retaliation. Additionally, he also played the lead role in the Philadelphia Renaissance Faire during its debut season in 2015.

He also appeared as “King Thor”, the leader of a Viking raiding party intent on capturing the city of Amman.

Hafthor and his former girlfriend Andrea have spoken about his occasional sleep troubles after a heavy meal due to his body weight. Furthermore, in March 2017, he was diagnosed with Bell’s palsy.

Bell’s palsy is a condition in which the muscles on one side of the face become weak or paralyzed. This affects only one side of the face at a time, hence causing it to droop or become stiff on that side. This is caused by some kind of trauma to the seventh cranial nerve, also called the “facial nerve.”

Talking about his social media visibility, Hafthor is active on various platforms. He joined Twitter in February 2010 and so far has 65.4k followers on his @thorbjornsson_ account.

Moreover, he is also available on Instagram with the handle @thorbjornsson. In this account, he has garnered 3 million followers and shared 2760 posts as of April 2020.

The channel gains 310k video views every day and also 1.9k new subscribers per day. Moreover, the channel also has over 100 published videos that have earned over 35 million views.

Additionally, he also earns through brand endorsements, acting, and much more.