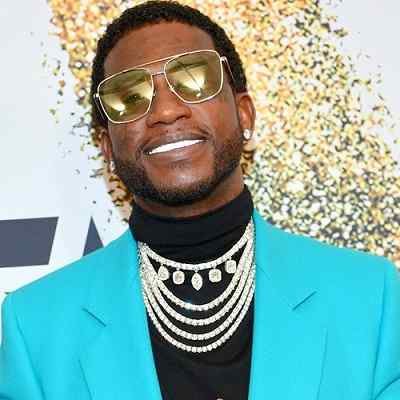 Gucci Mane is one of the well-known rapper and recording artist, who laid the groundwork for the ‘trap music’. In 2006, Gucci Mane released his first album titled ‘Trap House’ along with his Jeezy. His songs have been featured in many movies and have collaborated with other famous artists such as  Drake, Lil Wayne, Chris Brown, Selena Gomez, Mariah Carey, and Marilyn Manson.

Gucci Mane was born in Bessemer, Alabama on 12 February 1980. His nationality is African-American and has a zodiac sign, Aquarius. His father, Ralph Everett Dudley was a U.S serviceman and power plant worker, while his mother, Vicky Jean Davis was a social worker and teacher. Furthermore, his real name is Radric Delantic Davis. He is 41 years old.
Later, his parents separated and he settled with his mother in Atlanta. Before his father and mother got together, her mother has a son named, Victor Davis from her previous relationships. Further, when Gucci Mane was born, his father was on the run from the police. He fled to Detroit, Michigan. He was on the run for dealing crack cocaine and heroin. Due to the absence of his father during the time to sign the birth certificate, Gucci adopted his mother’s last name.

Gucci’s family has a strong military background. To be precise, his paternal grandfather, James Dudley, Sr., served in the military for twelve years. He also served during World War II and he served as a chef during all those years. Similarly, his maternal grandfather served in the Pacific during World War II and on the USS South Dakota and his name was Walter Lee Davis. Mane’s father also served in the military and he was stationed in Korea for two years.

Gucci grew up in a poor neighborhood, which was high in crime. Being raised in such an environment, Gucci was also involved in drug dealing from an early age along with his brother. He even spent his Christmas money to acquire crack cocaine while he was in eighth grade. This was the start of his career as a drug dealer.

Since his mother was a teacher; she spent most of her time teaching Davis how to read and write. His first school was Jonesboro Elementary where he attended kindergarten and a few years of elementary education. After, moving to Atlanta, Gucci Mane did his schooling from Cedar Grove Elementary School.

Throughout his school, he maintained good grades. Gucci completed his high school from McNair High School in 1998 with a 3.0 GPA and a HOPE Scholarship to Georgia Perimeter College. Gucci took a computer programming course, though he rarely attended and was kicked out in 2001. It happened after Gucci was caught with possession of crack cocaine by an undercover police officer. He was sentenced to 90 days in county jail and then probation.

Though, Gucci used to thrive poetry at an early age, later he shifted his interest in rapping and started his rap career at the age of 14. At the age of 22,  Gucci released an album ‘La Flare’ on ‘Str8 Drop Records’ in 2001.  Across East Atlanta, around 1000 CDs were distributed. After a year, he became an associate member of ‘Sign Yourself Click’. He signed a deal with SYS Records and established his recording label ‘LaFlare Entertainment’ by teaming up with a record producer and DJ, Zaytoven.

Later, he moved to New York with the hope of settling a distribution contract, unfortunately, nothing went as per his thought. Gucci Mane had to return empty hands.  Before releasing his debut album,  ‘Trap House’  in 2006, he worked secretly with Tommy Boy Records for an album distribution contract.

Though ‘Trap House’ was one of the tops of the Billboard Heatseekers Chart, their disputes separated them. In 2006, he released his second album. ‘Hard to Kill’ included “Freaky Gurl” was an independent album that secured 12th spot on Hot Rap Tracks.  In 2007, the commercially released ‘Back to the Trap House’ had the remix of “Freaky Gurl”. 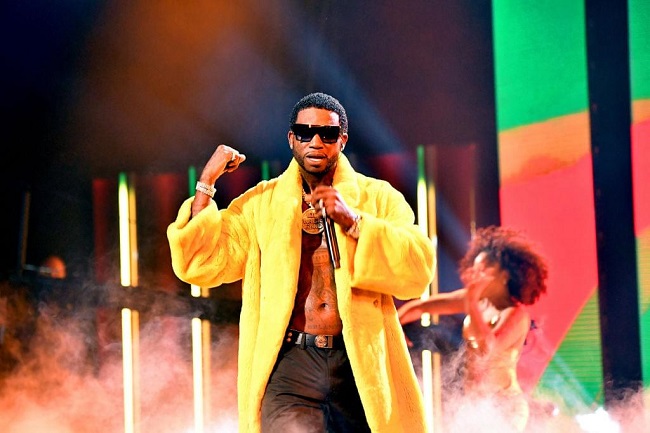 Records in May 2009, Gucci appeared as a guest singer on several tracks and song remixes along with Maria Carey’s “Obsessed”. Within 7 months of his appearance as a guest singer, Warner Bros Records released his second studio record ‘The State vs. Radric Davis’ on 8 December 2009. After coming out of jail, his label which was formerly known as ‘So Icey Entertainment’ became ‘1017 Brick Squad Records’.

On 6 August 2010, the opening track, “Gucci Time” of his third studio record,  ‘The Appeal: Georgia’s Most Wanted’ debuted on his “MySpace profile. ‘The Return of Mr. Zone 6’, Gucci’s 10th extended play secured 2nd on Rap and 8th spots on R&B/Hip-Hop Albums charts. Until now, it is one of the most top-charting albums on a billboard.

‘Ferrari Boyz’ and ‘BAYTL’ are the albums associated with  ‘Waka Flocka Flame’ and ‘V-Nasty’ respectively in 2011. After a year, mixed tapes: ‘Trap Back’,  ‘I’m Up’, and ‘Trap God’ followed. Those albums featured other rappers like ‘ Birdman’, ‘Meek Mill’, ‘Future’, ‘Rick Ross’, and ‘Waka Flocka Flame’. In the year 2013, Gucci announced that he would be disclosing a new studio album titled ‘Trap House III”. He said that it would be in the ‘ Trap House’ series.

Again, he declared that ‘Mr. GuWop’ will feature Marilyn Manson. Later, this project canceled because he was admitted to rehab. The same year, he also declared that he will be revealing ‘Big Money Talk’. An album that consists of a compilation of tracks, composed by the group of rappers under  ‘1017 Brick Squad’. But that contract got leaked. In 2013, he began his work on releasing  ‘The State vs. Radric Davis II: The Caged Bird Sings’, and the album was finally released on 25th December 2013.

From 2014 to 2016, Gucci’s work resulted in a soaring growth, he released almost 30 mixtapes. His outstanding release was ‘Young Thugga Mane La Flare’, ‘Big Gucci Sosa’, East Atlanta Santa’, and ‘1017 Mafia: Incarcerated’. After he came out of jail after 3 years, his 9th studio album, ‘ Everybody Looking ‘ came out. Later, he companied with Rae Sremmurd for ‘ Black Beatles’.”Black Beatles” acquired the number one position on the Billboard Hot 100.

In 2016,  ‘Woptober’, his 10th indie released. His 10th studio record ‘The Return of East Atlanta Santa’ ended 2016 remarkably. He made an appearance in several movies, ‘Birds of a Feather’ ‘Spring Breakers’, and ‘Gucci Mane-The Lost Footage’ are some of them. 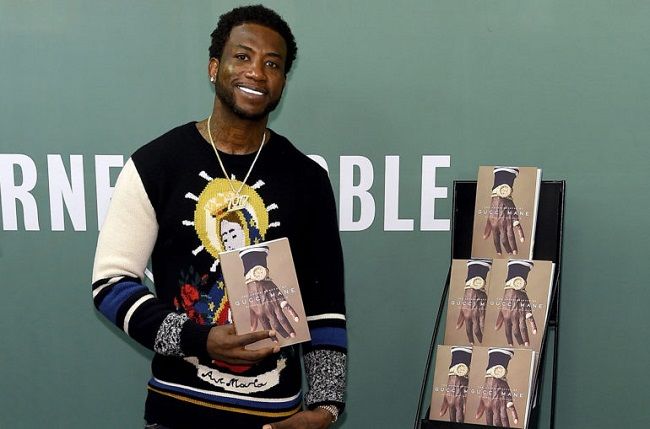 On May 26, 2016, he got released from prison five months early. The next day, he released the first single under his new deal with Atlantic Records, “First Day Out Tha Feds”. On June 3, 2016, he made an appearance on “Champions”, the first single off of GOOD Music’s Cruel Winter album. Gucci made his first performance since being released from prison at the Elan Mansion, an Atlanta club on June 17, 2016. On June 25, 2016, he made an announcement about his ninth studio album and first since his release from prison, Everybody Looking. It released on July 22, 2016.

In September 2016, he collaborated with Rae Sremmurd on the single “Black Beatles”, which in November 2016. It reached number one on the Billboard Hot 100, and his first number-one single as a featured artist. Likewise, he released Woptober on October 14, 2016, and released a side project called Free Bricks 2 with Future. On December 16, 2016, his tenth studio album, “The Return of East Atlanta Santa” released.

On May 26, 2017, he released Droptopwop, a collaborative mixtape with Metro Boomin. He released his eleventh studio album, Mr. Davis on October 13, 2017. The album includes “I Get the Bag” featuring Migos, which topped at #11 on the Billboard Hot 100, his most successful single as a solo artist to date.

Two months later, he released his twelfth studio album El Gato: The Human Glacier and his thirteenth album, Evil Genius, on December 7, 2018. Gucci Mane is also own a Youtube channel with the name of ‘OfficialGucciMane’. He has more than 3.6 M subscribers on his Youtube channel.

Apart from singing, Gucci Mane has also acted in the film. He made his acting debut in the 2012 film Birds of a Feather, co-starring with Producer Zaytoven. In the same year, he appeared in Spring Breakers which also featured Vanessa Hudgens, James Franco, Selena Gomez, Ashley Benson, and Rachel Korine.

In May 2016, he started teasing images of his upcoming clothing line called Delantic. It features a range of apparel, from T-shirts and hoodies to underwear. Similarly, in September 2017, he published his autobiography, The Autobiography of Gucci Mane. He wrote the book during Davis’s time in prison and authored with Neil Martinez-Belkin, a former XXL Magazine editor.

Davis released a trailer for the book consisting of a short montage directed by videographer Cam Kirk in the weeks before the publication. His Autobiography went on to become a New York Times bestseller.

Furthermore, in 2019 he began working with Italian fashion house Gucci. previously brand had not associated itself with the rapper due to his criminal record and image. After a few years of individual growth that included Davis getting married and improving his fitness, Gucci announced he would be the face of their Gucci Cruise 2020 Campaign.

Radric Delantic Davis had been nominated for  Coca-Cola Viewers’ Choice Award in 2017, under several categories, but he won ‘ Best Pop Video ‘ for ‘Down’, collaborated with Fifth Harmony.  Nominated for Best R&B Performance in ‘Grammy Awards 2020’, but unfortunately, later he couldn’t take this award his home.

Gucci Mane is a married man. His ex-wife, Sheena Evans, and he have a son named, Keitheon. Her wife from the second marriage is  Keyshia Ka’Oir. Keyshia Ka’Oir, who is five years younger than him is an entrepreneur and thus runs three companies titled: Ka’oir Cosmetics, Ka’oir Fitness, and Ka’oir Hair. 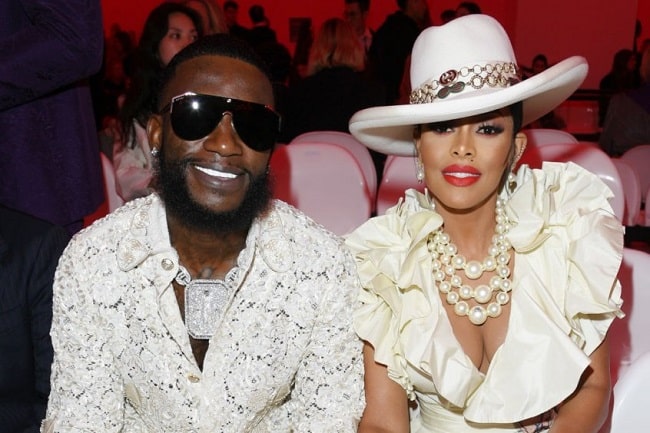 Gucci Mane has been in numerous controversies. One of such is his charge against the murder of Pookie Loc, a CTE affiliate of Young Jeezy. However, the charge was later dropped as Gucci maintained that he did it out of self-defense. Later on 16 March 2012, R&B singer Keyshia Cole came at Gucci Mane for the controversial song “Truth” in which Gucci indicated that Cole was cheating on Jeezy with P.Diddy. He also caught up in controversy with the song “Fuck The World” that had a controversial line supposedly directed to fellow Atlanta rapper Yung Joc.

Gucci Mane has black eyes and hair of the same color. He stands tall with a height of 189 cm and a weight of 96 kg. Further, he wears shoe size 11 according to US standards. Other than that, there are no more details regarding h

Gucci Mane is active in most of the social media platforms. He is a verified user of Instagram with more than 13.9 M followers. His twitter account with his stage name, Gucci Mane has 8.1 million followers. With the username of @guccimane, Gucci has been getting the love of more than 8 million followers in his Facebook account.