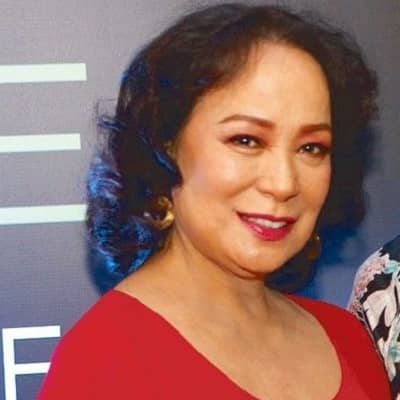 Gloria Diaz is the first-ever Philipina to win the Miss Universe crown back in the year 1969. Gloria Diaz went on to pursue her career in acting and has done a role in various films, TV series, TV movies, and TV mini-series. She has played roles such as ‘Teodora Alonso’ in the biopic, ‘Jose Rizal’, and ‘And Lilia’ in ‘Nasaan Ka Mann’ among others. She has bagged ‘FAMAS Best Supporting Actress’ and ‘PMPC Star Awards for ‘Movie Supporting Actress of the Year’ for films like ‘Sakal, Sakali, Saklolo’, and ‘‘Nasaan Ka Man’.

Gloria Diaz’s full birth name is Gloria Maria Aspillera Diaz. She was born on 10 March 1951 in her birthplace, Manila, Philippines.

Her age is currently 71 years old. Gloria was born to her father Jaime Diaz and mother Teresa Aspillera. However, she has not disclosed what her parents do for a living.

Beauty queen, Diaz is a Filipino by nationality while her ethnicity is not disclosed. She was born with an astronomical sign of Pisces.  She was born into a family of twelve children.

Furthermore, the names of her sisters available to us are Rio Diaz, Aurora Diaz, Georgia Diaz, Ruby Diaz-Roa, Didit Diaz, and Benjie Diaz, while Ramon Diaz is her brother. 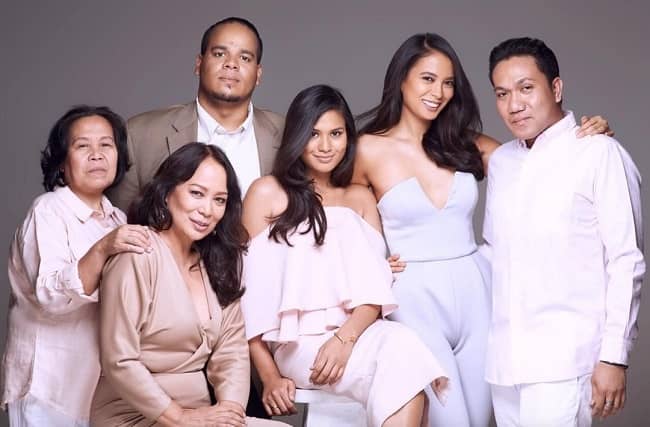 Regarding her educational background, she had her high school diploma from the basic education department of St. Scholastica’s College Manila.

Gloria Diaz is a straight woman. She is in a relationship with Mike de Jesus. Before this, she tied the knot with a businessman, Gabriel Daza. The duo had two daughters and a son.

Her daughters are Ava Daza and Isabelle Daza while her son’s name is Raphael Daza. Unfortunately, they could not have a sustaining relationship. Gabriel is her ex-husband. 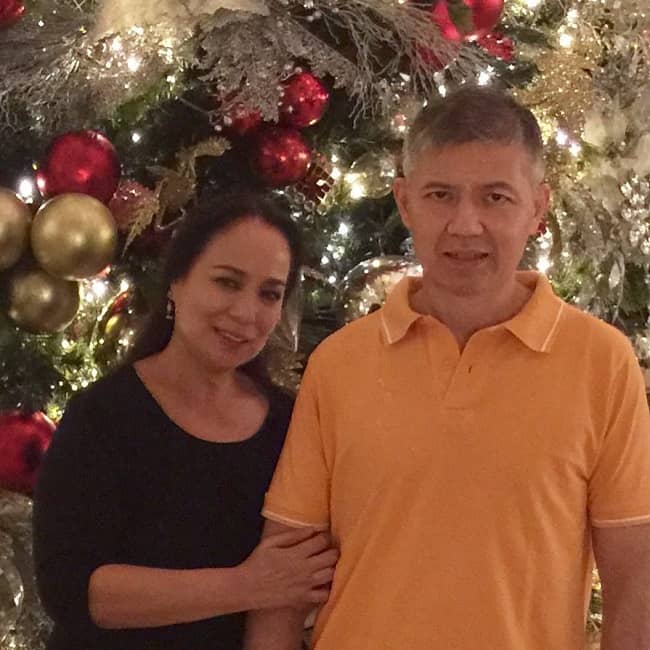 Veteran actress, Gloria stands tall with a height of 5 feet and 5 inches while her weight is not available. Likewise, her body measurements are recorded as 34.5-23-34.5.

Furthermore, her black hair and black eyes make her appear more appealing to others.

For her first-ever movie, ‘The Best Animal in the world’, Gloria bagged the ‘Best Actress Award in the ‘FAMAS Awards’. Similarly, she got the ‘Best Supporting Actress award for the biopic, ‘Jose Rizal’ in 1998.

Similarly, she won awards under the same category in the years 2008 and 2010.

In 2008, for ‘Sakal, Sakali, and Saklolo’, she was given “Movie Supporting Actress of the Year” while for ‘Sagrada Familia’, she bagged ‘Best Actress for a Supporting Role award.

Diaz put forward her view that  Raj and other Filipinas would benefit from answering pageant questions via the use of an interpreter rather than in English.

Again she stated that “Because when you think about a Cebuana can hardly speak English and of course Tagalog.  Maybe she should answer in Bisaya”.

Her response created a fuss among Cebuanos, who felt that Díaz insulted their English proficiency.

Gloria being herself did not see any fault on her side, instead, she clarified saying: Let me clarify it once and for all.

People should have the right to say or answer (questions) in whatever language they want to say. If they’re Cebuanos, they can say it in Cebuano.

I did not say that they did not speak English. If you’re Ilocano,  say it in Ilocano.

The journey of Miss Universe

Díaz was convinced and approached by a pageant connoisseur to take part in Binibining Pilipinas while studying in college.

At the age of 18, she was crowned Binibining Pilipinas-Universe in 1969. Her shrewdness and her looks have aided her to win the pageant title.

After winning the title of Binibining Philipinas, she was sent to Miami Beach, Florida, the U.S to compete with Miss Universe in 1969. Diaz did not let down anybody’s expectations.

She sailed throughout all the pageant events that led up to the finals at the Miami Beach Auditorium.

She made it to the Top 5 and her final answer to the question, regarding “men in the moon” captivated judges and the audience.

Also, she was crowned as Miss Universe on July 19, 1969, and became the first Filipina to win the Miss Universe crown. Her victory reached the Apollo 11 crew during their space mission.

During her tenure, she traveled to several countries to promote the advocacies supported by the Miss Universe Organization.

Furthermore, she appeared in many public and television events in the United States. 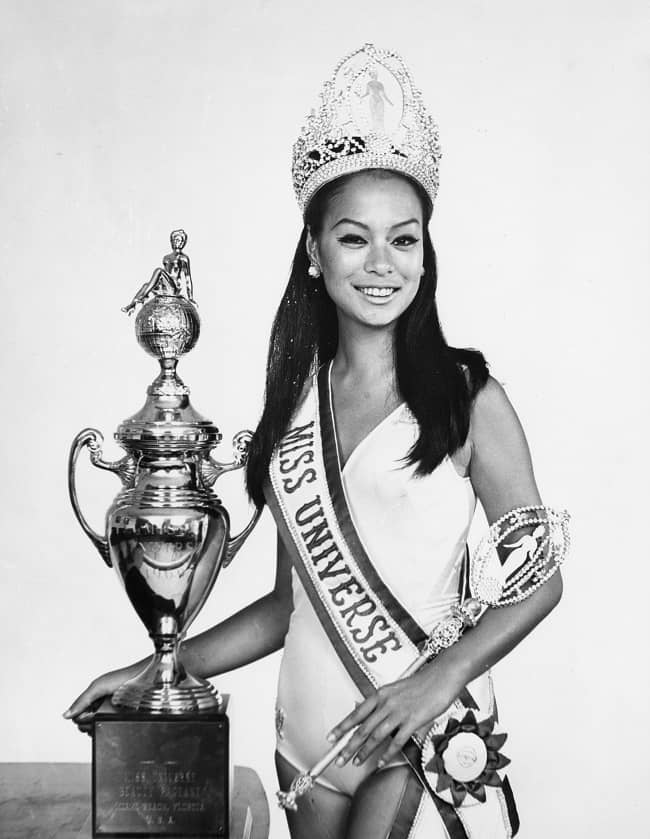 Over the four decades, she has successfully been in the limelight with great poise.

She is a brilliant actress in the world of the Philippine Big screen and Television.  As her tenure as Miss Universe ended, she pursued an acting career in the Philippines.

Her first performance as Isabel in the movie, ‘The Most Beautiful Animal in the World became her breakthrough.

Before landing on the TV series, Diaz has done many films on Big Screen such as ‘Amor’, ‘An Affair in Tahiti’, ‘Balakyot’, and ‘Wanakosey’ to name a few.

Her few roles like ‘Dolores in ‘Audalucia’ and ‘Matilde ‘Dining’ Diaz Patron’ in the movie, ‘This Is How We Were Before, How Are You Doing Now? were lauded by the audience. In 1978, she presented herself in the TV series, ‘Flordeluna’.

In 1996, she appeared in the drama series, ‘Anna Karenina’.  She amassed immense popularity for her character, ‘Nadia’ after appearing in the sitcom ‘Kool Ka Lang’ on GMA Network in 1998.

Furthermore, she portrayed the role of ‘Lilia’ in ‘Wherever You Are, and ‘Daisy’ in ‘So… Happy Together’, and ‘Charito’ in ‘Kasal,kasali,kasalo’.

Similarly, Diaz was a ‘Big Sister’ in the reality show the Philippines, ‘Pinoy Big Brother Drama Special: The Final Task’.Similarly, she played the role of ‘Teodora Alonso’ in the biopic, ‘Jose Rizal’.

Her portrayal as ‘Lilia’-a a woman trying to suppress her distraught as she tries to keep her family together was once again highly popular among the audiences. 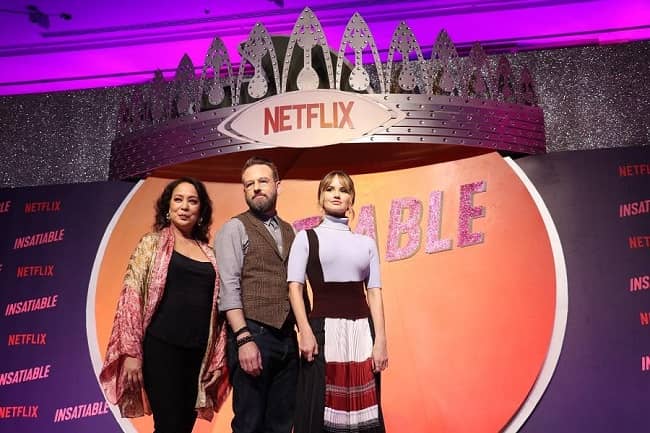 Caption: Gloria Diaz with another cast of Insatiable(Source: GMA Network)

She guest-starred as herself in the former while she played the role of ‘Monica Johnson’ in the latter. In 2009, she was offered the movie, ‘The Only Mother to You All’.

Furthermore, in 2009, she portrayed the role of ‘Pinky Ortega in the TV series, ‘Nagsimula sa Puso.

From 2010 -2011, Diaz did TV mini-series, TV movies, TV series, and Big cinema. She played roles as ‘Paula Fernandez’ in ‘Diva’, ‘Yuri Sandoval’ in ‘Beauty Queen’, ‘And Dolores Bustamante in ‘100 Days to Heaven’ amongst others.

Similarly, she did one TV mini-series,’ Mistaken Identity’ where she was Queen Mercedes in 2011. The same year, she was also seen in the TV series, ‘Glamorous’ and the TV movie, “Medical Center.

Diaz appeared in several ABS-CBN television dramas from the year 2012-2018. Some of them are ‘Kung Ako’y liwan Mo, May Isang Pangarap, Mirabella. In the movie, ‘Chedeng and Apple’, she played the role of Cheng.

Similarly, she played several roles in the the’Maalaala Mo Kaya’ TV series that was aired in 1991 and ended in 2017.

She has unique roles in like Mommy, Joel’s Mother, Ising, Adora, and Rosita in a few of the episodes. Talking her other on-screen appearances includes her role as “Remedios’ in ‘Dear Uge’.

Likewise, ‘Natalia Roces’ in ‘Pamilya Roces’ and ‘Gloria Reyes’ in ‘Insatiable’ were her other on-screen projects in the year 2018 and 2019 respectively.

As of now, she is in the spotlight with her role as ‘Dahlia/Dahlia Rodriguez-De Veyra’ in the TV mini-series, ‘Beauty Queens’.

Multi-talented Gloria is an actress, model, and beauty queen. Her income details are not available separately, but her hard work has paid off her well. She owns a net worth of $8 million in total as of 2022.