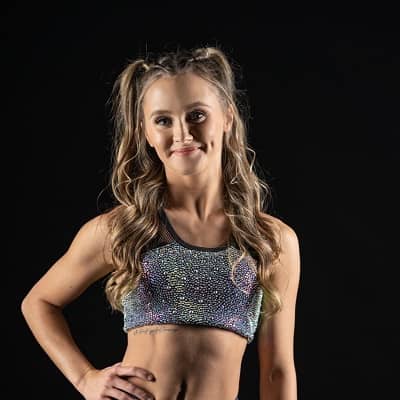 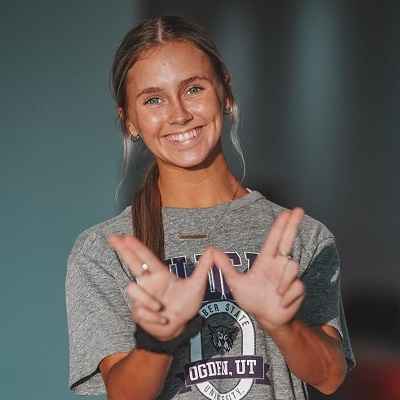 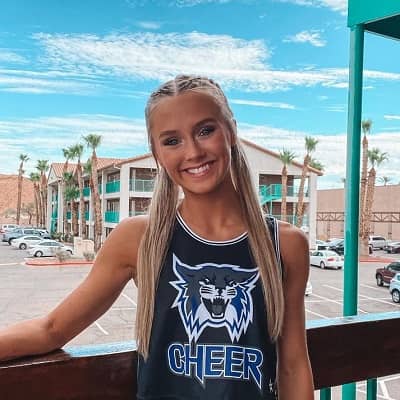 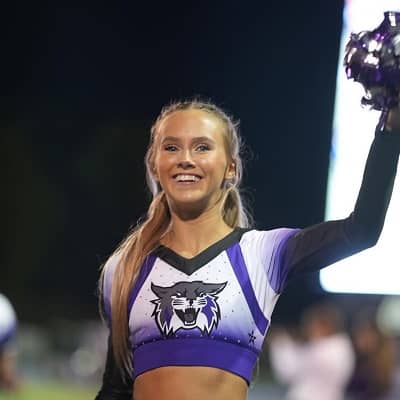 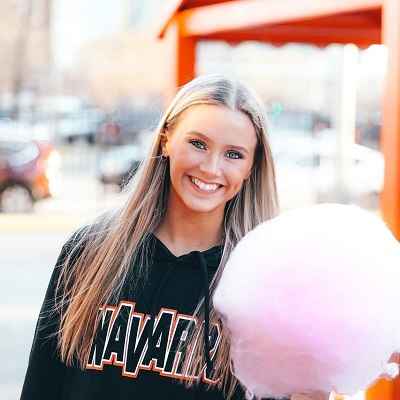 Gillian Rupert was born on 20 March 2001 and he is currently 21 years old. She hails from Garland, Texas, and his zodiac sign is Pisces.

Her mother’s name is Angela K Rupert. However, there are no details about her father as of yet. 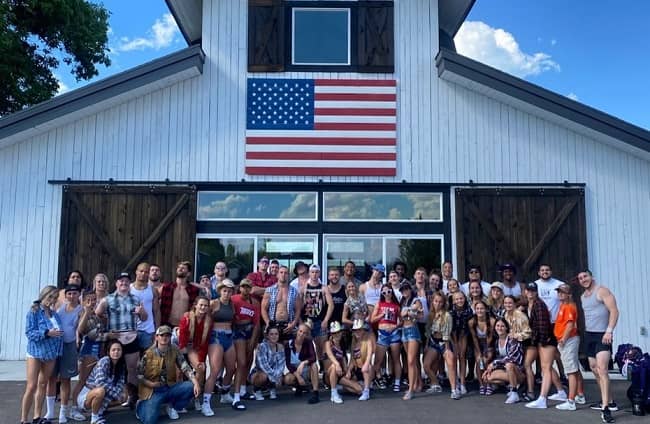 Caption: Gillian Rupert posing for a photo with the Weber Cheer team during an elite retreat in August 2022. Source: Instagram

Likewise, Gillian attends Weber State University and is also a part of their cheer team. Previously, this personality was also a cheer at Navarro College from 2019 to 2021.

Gillian Rupert stands tall at an approximate height of 5 feet 5 inches and her weight is around 45 kg. Likewise, Rupert has blonde hair and beautiful green eyes.

Besides these, Gillian’s other body measurements including her chest-waist-hip measures, biceps, dress size, etc. are still under review. As a professional cheerleader, Rupert exercises regularly to stay fit and flexible to perform difficult stunts during her cheer performances with her teams.

Professionally, Gillian Rupert is a popular social media personality. As such, this personality is primarily popular for posting lip sync, dance, cheer, and lifestyle videos on her @gillianrupert TikTok account.

Likewise, Gillian often posts videos with her friends and team members. Due to the popularity of her account, this personality has accumulated over 169,500 followers and 5.2 million likes on her Tiktok profile.

Talking about the beginning, Gillian started to initially post to her Tiktok profile in May 2021. Similarly, this personality is also famous for appearing in the 2nd season of the Netflix series Cheer. On her Tiktok profile, one of her most popular videos is from her tryout for the TV series.

Likewise, Gillian featured the song Army by singer Ellie Goulding in her 19 January 2022 TikTok video. Furthermore, this personality is also popular as the best friend of Cassadee Dunlap. Additionally, she is also the 2022 Grand Collegiate NCA Champ. 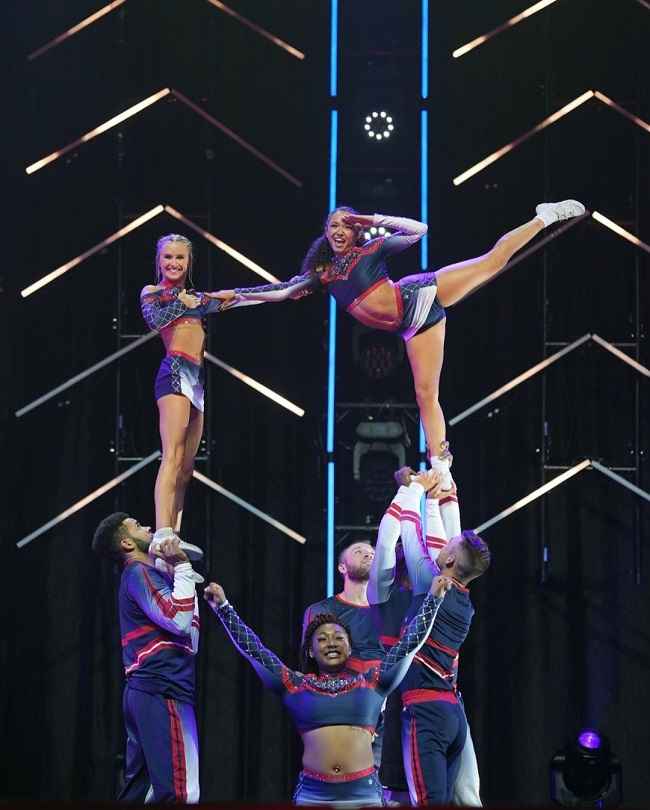 Caption: Gillian Rupert and her team during a performance. Source: Instagram

Gillian Rupert has worn dresses by various brands and designers over the years as a cheer. Among them, some brands Gillian has endorsed in recent days are tagged on her Instagram posts. Some such brands are Rebel Athletic (@rebelathleticcheer), EVAEDA (@evaedasportandswim), and LSKD (@lskd) among many others.

Gillian Rupert might be in a romantic relationship or single at present. It is not confirmed while writing this biography. However, Rupert shared an Instagram post in early September 2021 where she mentioned missing her other half.

Prior to this, Rupert frequently featured him on her posts and shared photos of them together. Moreover, the 1st Instagram photo featuring Rupert and David dates back to early October 2019. However, it is unclear whether or not David and Gillian are together at present as there are no recent Instagram posts by Gillian. 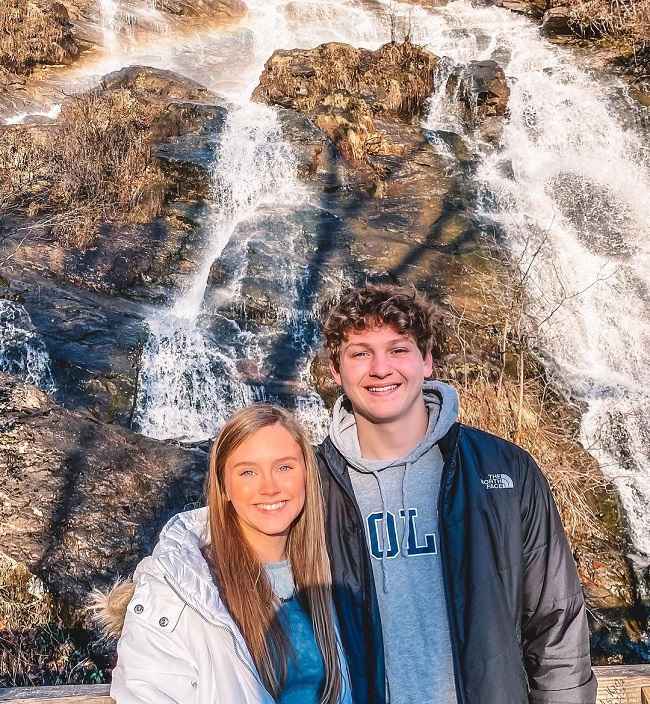 Caption: Gillian Rupert and David Newsom posing for a photo during their trip to Amicalola Falls State Park & Lodge in December 2020. Source: Instagram

Talking about her social media presence, Gillian Rupert joined Twitter in February 2021 and her username on this platform is @gillianrupert8. Similarly, Rupert is available on Instagram under the username @gillianrupert_. On this platform, she has earned more than 215K followers as of October 2022.

Likewise, her username on Tiktok is @gillianrupert. So far, her Tiktok profile has garnered over 169.5K followers and 5.2 million likes. Moreover, she also has an account on Cameo.

Gillian Rupert has a net worth of around $250,000 US dollars as of 2022. The young star accumulates her net worth and earnings through her successful career as a social media star, Tiktok, Instagram star, and cheerleader among others.