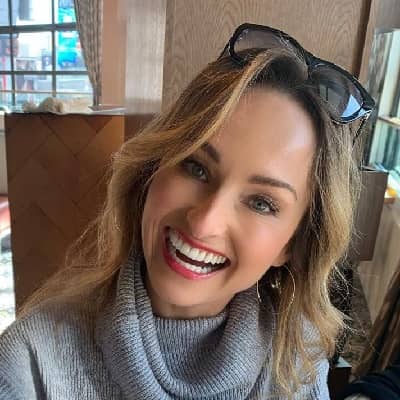 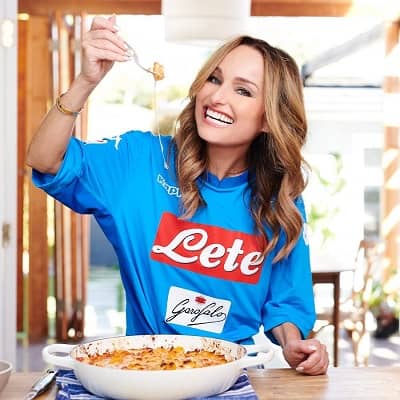 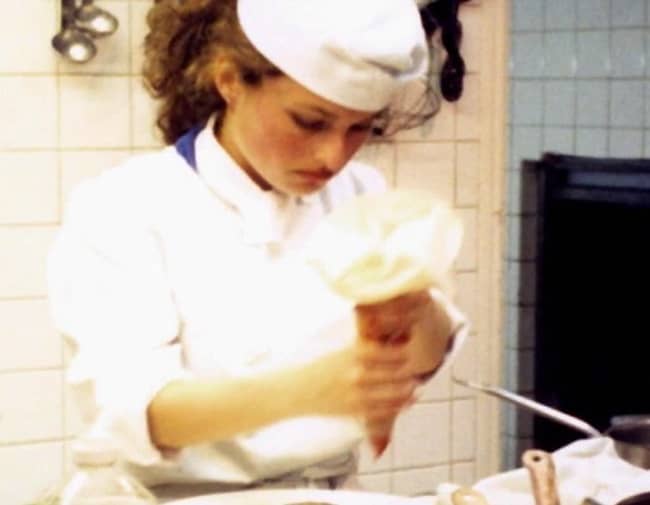 The actress attended the Marymount High School in Los Angeles. She later attended the University of California in Los Angeles and graduated with a bachelor’s degree in social anthropology. As a child, she used to work in her family’s kitchen as well as in her grandfather’s restaurant.

After completing her education, Giada de Laurentiis worked for multiple restaurants in Los Angeles. She then started her own catering company called GDL Foods and landed some famous clients such as director Ron Howard. Meanwhile, she also worked as a food stylist. She was asked by a friend at the ‘Food & Wine’ magazine to write about her family’s Sunday meal traditions. After an executive at the Food Network saw her article, she was given an opportunity to the channel to launch her own cooking show.

Laurentiis had never wanted to be on camera and that’s why she initially felt uncomfortable during the show. The show and the channel were seeking for hiring an actress or model, rather than an actual chef. Despite the criticism, she continued the show and eventually won the Emmy Award in 2008. Then Giada started a new show in 2007 named ‘Giada’s Weekend Getaways’. She also wrote the books ‘Giada’s Family Dinners’ and ‘Everyday Pasta’, which became best-sellers. Giada became a judge and mentor on the show ‘Next Food Network Star’ as well.

She launched a new cooking program ‘Giada at Home’ in 2008 and a cookbook of the same name in 2010. Both of them were enormously successful. She opened her first restaurant called GIADA in 2014, in Las Vegas, Nevada. It serves items such as lemon spaghetti, rosemary focaccia, and lemon flatbread. It has family-style, vegan, and gluten-free options as well. She has also worked as a voice actress in the animated short film ‘Pixie Hollow Bake Off’ as well as in the animated TV show ‘Handy Mandy’. Furthermore, she has authored several books, including ‘Everyday Pasta’, ‘Happy Cooking’, and ‘Giada’s Italy’. 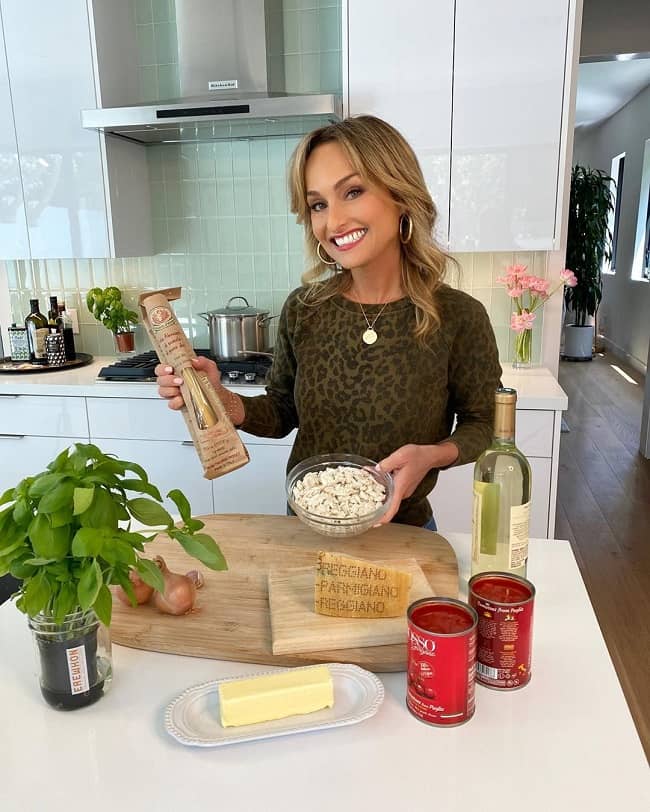 The net worth of Giada is $30 million. According to the website, Giada consented, as part of her divorce, to give her ex-husband their $3 million Los Angeles mansion, $300,000 worth in furnishings and artwork, and a percentage of various royalties. She is set to earn for cookbooks and TV shows that were in the works prior to the separation. Giada and her ex-husband have made co-parenting a priority.

The talented and beautiful actress was married to fashion designer Todd Thompson from 2003 to 2015. Giada had frequently mentioned her husband at the time, Todd Thompson, during her shows, from the moment she started on the network. Their only child was born on 29th March 2008. Her name was Jade Marie De Laurentiis-Thompson. Jade was named her mother “Giada” is Italian for “Jade”. While acknowledging how special the experience of having a child has been, she has stated that she does not plan to have more children.

After 11 years together, the couple announced their split in 2014. On December 29, 2014, De Laurentiis announced on her website that she and Todd had separated the previous July, and had decided to end their marriage. The divorce was finalized on September 3, 2015. After she had a separation with Thompson, she started dating TV producer Shane Farley. 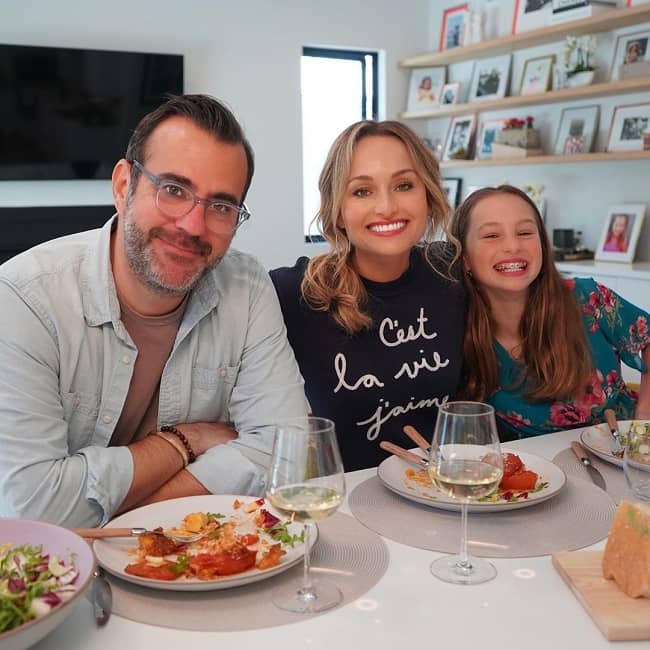 Caption: Giada De Laurentiis with her boyfriend and her daughter (Source: Instagram)

In a 2011 interview with Redbook, De Laurentiis recounted how she was born in Italy and arrived in the U.S. in the 1970s, unable to speak any English. She was mocked at school. People quickly fell for her approachable, friendly demeanor, and her simple, yet flavorful Italian dishes. It wasn’t long, though, before the celebrity chef had some controversy. While, understandably, fans can sometimes get very excited when they meet Giada De Laurentiis in person, she’d really prefer if they didn’t touch her. She understands why people get excited to meet her, but, as the New York Daily News reported, De Laurentiis isn’t very comfortable being touched by strangers.

During an already-iconic segment on The Ellen Show, Giada De Laurentiis appeared, armed with several of her most-loved recipes and ready to teach Ellen DeGeneres and Nicole Kidman how to cook them. Later, after many eye rolls and quips back and forth, it was time to taste De Laurentiis’ pre-made focaccia. Kidman called the food “tough” — and then spit it out. Of course, being Nicole Kidman, she did so quite gracefully, but it made for an awkward TV moment, for sure. According to Food Network Canada, during her cooking segment, then-host Matt Lauer took a bit of her seared chicken. The chicken was only for appearances and it wasn’t ready enough to eat. He ran off the set in order to spit the bite out into the trash.

In an interview with Bravo’s The Feast, Giada De Laurentiis proved she’s just like the rest of us when it comes to holiday fails. While working one of her first catering jobs out of school — cooking Thanksgiving dinner in a client’s home — she got tripped up by the family pet. “The thing is, they had a big dog, and I wasn’t used to cooking around dogs. I tripped over the dog once I put the turkey on the platter. Once the turkey hit the floor, that dog got to it before I did. So, there was no longer a turkey for Thanksgiving, but lots of sides,” she explained. Of course, being that she is Giada De Laurentiis, she was able to quickly whip up some pasta to take the place of the main course.

Talking about the chef’s body measurement, she stands the height of 5 feet 2 inches tall. She has a weight of 52 kg. Her body measurement is 35-24-34 and her bra size is 32C. Similarly, she wears a shoe of size 6 (US). Giada has a pair of very attractive blue eyes and lights brown hair color. Moreover, she has a very well-maintained and slim figure with a beautiful face.