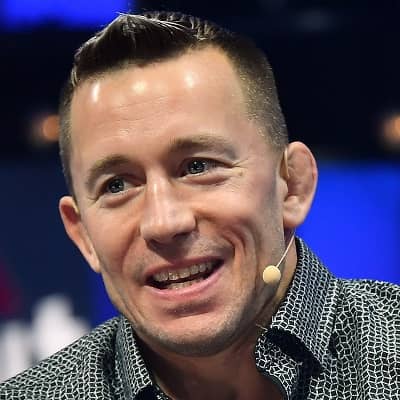 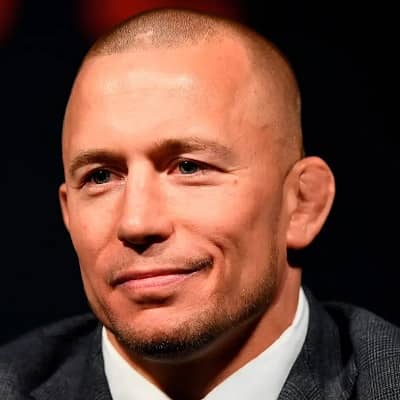 Georges Saint Pierre was born on May 19, 1981, in Saint-Isidore, Monteregie, Quebec, Canada. As of now, he is 40 years old and is a citizen of Canada.

Moreover, he has a zodiac sign of Taurus and he belongs to French-Canadian. His nickname is Rush, GSP, and is a Christian by religion.

Talking about his parents, he is the son of Roland Saint Pierre (father) and Myriam Saint Pierre (mother). While his mother worked in a nursing home, his father filled in as a deck and floor covering carpenter. Similarly, he is his parents’ eldest and only son. He has two younger sisters, one of his sisters’ names is Myriam. 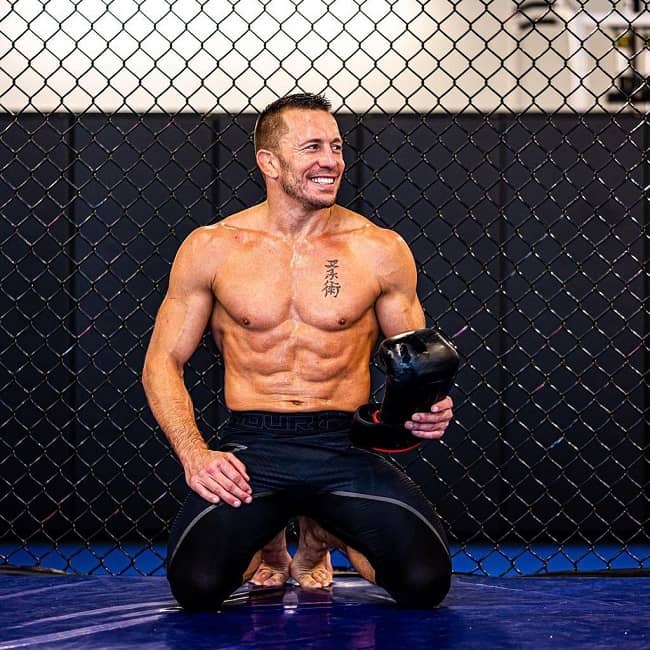 Talking about his education, he attended Ecole Pierre-Bedard, a local high school. He then enrolled in the Cegep Edouard-Montpetit to study kinesiology.

His money and clothes were frequently stolen by other students at his school. Because of the bullying, he decided to study Kyokushin Karate with his father and later with a Kyokushin Karate Master.

He also participated in ice hockey, skating, and a variety of other sports as a kid.
After his karate master died, he began taking wrestling, Brazilian Jiu-Jitsu, and boxing classes. To support himself and pay his school fees, he worked as a bouncer at a Montreal nightclub called Fuzzy Brossard and as a garbage man. 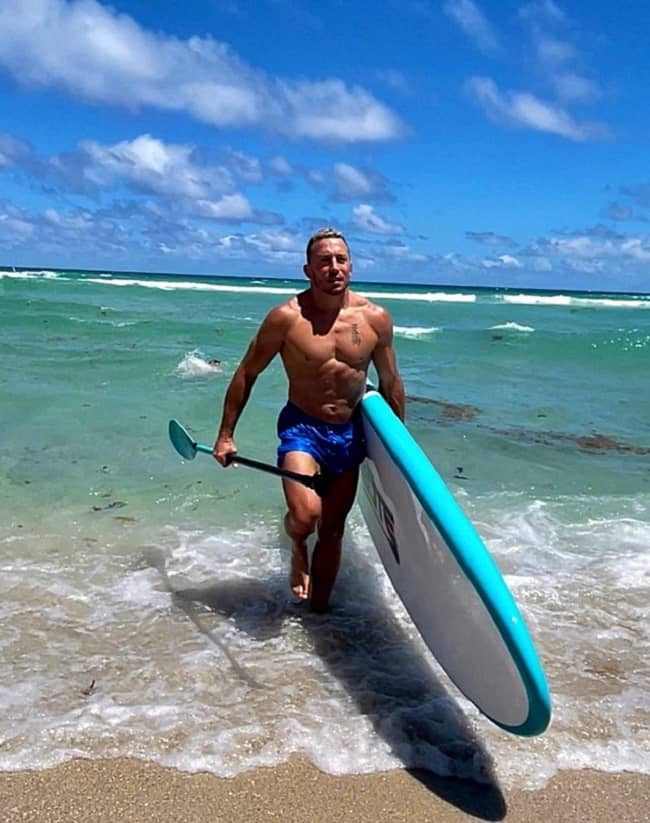 He stands 5 feet 10 inches tall and weighs around 77 kg. Moreover, he has an athletic body with blue eyes and blonde hair.

At the age of 21, Georges became a professional mixed martial artist. He had already earned his black belt in Kyokushin Karate at the time. At UCC 7: Bad Boyz on January 25, 2002,

At UCC 10: Battles, he fought for the UCC Welterweight Championship against defending champion Justin Bruckmann.

In the first round, he submitted his opponent title against Travis Galbraith at UCC 11: The Next Level on October 11, 2002. He fought and defeated Pete Spratt at the TKO 14: Road Warriors event on November 29, 2003. 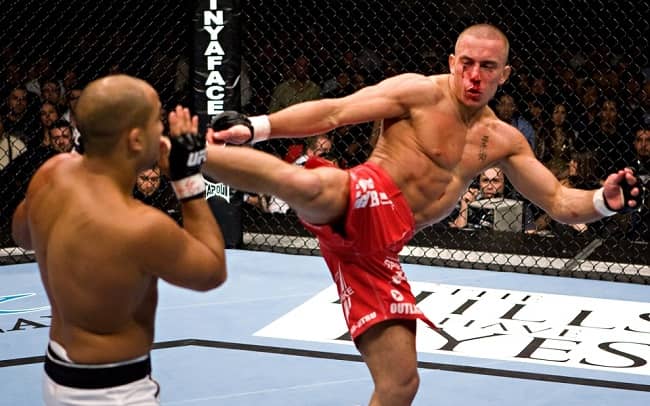 Caption: George St-Pierre fighting against his opponent at the UFC show (Source: talkSPORT)

On January 31, 2004, he made his UFC debut against Karo Parisyan at UFC 46, winning the fight by unanimous decision. At UFC 48, he faced Jay Hieron in his next fight.

He won the first round by technical knockout after dominating his opponent from the start. In his third UFC fight, he faced his first major opponent.

When George was coming up through the ranks, Matt Hughes was already a well-known figure in the sport. On October 22, 2004, they fought for the vacant UFC Welterweight Championship at UFC 50.

Despite holding his own against a much more experienced opponent for the majority of the fight, Matt caught him in an armbar and tapped him with only 10 seconds left in the first round.

He later admitted that losing to Matt was the best thing that could have happened to him at the time. Two years later, at UFC 65, he would fight Matt again, and this time, Georges would win.

He won the UFC Welterweight Championship by technical knockout in the second round over Hughes. In his 10th UFC fight, he was defeated for the second time in his career.

Fighting a relatively unknown Matt Serra, Georges was defeated by technical knockout in the first round, effectively losing his welterweight title.

Again, before facing Matt at UFC 83, he defeated Josh Koscheck by unanimous decision at UFC 74 and Hughes by verbal submission in their third bout at UFC 79.

Matt lost the fight and the welterweight title in the second round. After reclaiming his title, he faced Jon Fitch in his first title defense.

He was declared the winner by unanimous decision after the match went the distance. In addition, the match was renamed “The Fight of the Night.”

He voluntarily vacated the title after defeating Johny by a split decision on December 13, 2013, and made the news public.

In addition, he also informed the reporters that he would be taking a break from the sport. He eventually came back to win the UFC Middleweight Championship by defeating Michael Bisping at UFC 217.

Moreover, he vacated the title after 34 days because he had ulcerative colitis and didn’t want to slow down the division.

In the 2009 action thriller movie ‘Never Surrender,’ he made his acting debut as a character named after himself. He also appeared in Hector Echavarria’s action film ‘Hell’s Chain’ that year,

In the 2014 superhero film ‘Captain America: The Winter Soldier,’ he made his Marvel Cinematic Universe debut as Georges Batroc /

The Leaper, is a character dubbed by writer Mark Waid as “John Claude Van Damme of the 1960s.”

Van Damme and Georges have been friends for a long time and collaborated on the martial arts movie ‘Kickboxer: Vengeance’ in 2016. He co-starred in the action crime film ‘Cartels with Steven Seagal in 2017.

All Canadian Open Junior Kumite Champion, Fighter of the Year, Most Dangerous Man of the Year, MMA Most Valuable Fighter, UFC Hall of Fame, Most Wins in UFC Welterweight Title Fight,

Talking about his net worth, his net worth estimates at around $30 million. For each battle, he gets around $6 million, plus an additional $50,000 if he wins Fight of the Night.

He also made some of his income from his endorsements of around $12 million-$15 million.

George is single and unmarried yet but it is rumored that he had dated a lot of ladies before. According to rumors, he dated Divine Kirezy, Lucy Onyeforo, and Genie Bouchard but their relationship has not been confirmed.

He was once been in controversy while he battled against Matt Penn at UFC 94 on January 31, 2009. Matt, on the other hand, was a little more dominant in the first round.

When Georges’s cornerman, Jason Parillo, requested that the fight be stopped in the fourth round, the referee agreed. George’s victory was clouded by controversy, as one might expect.