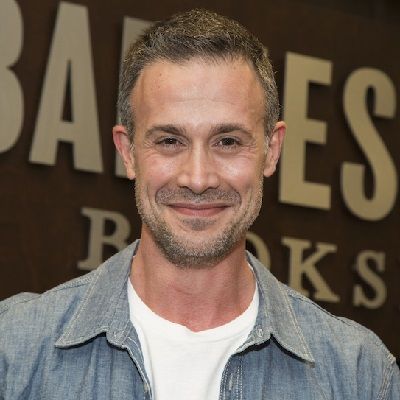 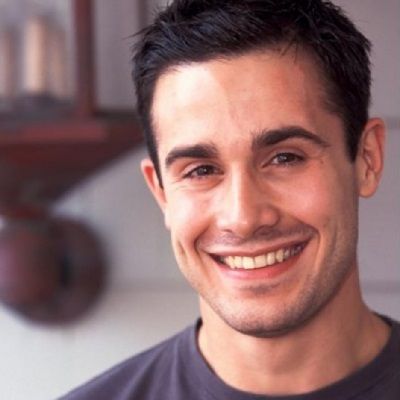 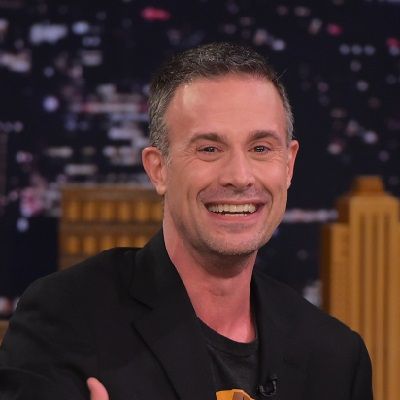 Freddie Prinze Jr. is an American actor. Freddie Prinze Jr. has starred in films like “She’s All That” and “I’ll Always Know What You Did Last Summer”. Moreover, he was also named one of People magazine’s 50 Most Beautiful People in the year 2000.

What is the relationship status of Freddie Prinze Jr.?

Sarah is an American actress, producer, and entrepreneur who made her acting debut in An Invasion of Privacy, which is a made-for-television film. It was after an agent spotted her at the age of four in New York City.

Prinze Jr. and Sarah started dating in 2000 and they were engaged in April 2001. However, they met several years ago. More precisely, they met while filming I Know What You Did Last Summer in the year 1997. Additionally, the couple also appeared together in Scooby-Doo in 2002, Scooby-Doo 2: Monsters Unleashed in 2004, Happily N’Ever After in 2006, and Star Wars Rebels from 2014 to 2018. The wife also made a non-speaking cameo in the husband’s film She’s All That.

Before marrying Sarah, Freddie Jr. was in a romantic relationship with Kimberly McCullough. Kimberly is an American actress, TV director, and dancer. She is also best known for her role as “Robin Scorpio” on the soap opera General Hospital. It is a role which she originated at the young age of 7, playing the character on and off from 1985 to 2001.

The duo dated from 1996 to October 1999 and went their ways. More precisely, they met when Kimberly when was in General Hospital, and Freddie Jr. expressed that he had no idea why Kimberly broke up with him. 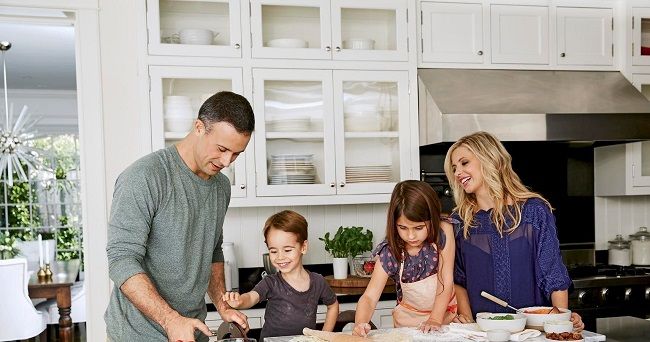 Freddie Prinze Jr. was born on 8 March 1976 in Los Angeles, California and he is currently 46 years old. He is the single child of actor-comedian he and real estate agent Katherine (Kathy) Elaine Barber (née Cochran). Sadly, his father passed away from a self-inflicted gunshot wound on 29 January 1977. When this happened, he was only 10 months old. Moreover, his father was also an American stand-up comedian and actor. He was the star of the NBC-TV sitcom Chico and the Man from 1974 until he died in 1977.

Additionally, his godfather is martial arts legend, Robert Wall. His paternal grandfather namely Edward Karl Pruetzel, was German and was born in 1914 in Berlin. Edward’s parents were Friedrich Karl Prutzel and Eleanor Maria Magdelena Schultes. Edward moved to the United States in 1934.

Similarly, his paternal grandmother namely María de Gracia “Mare” Graciela y Ramirez, was a Puerto Rican. The family of his mother is from West Virginia and they have Irish, English, Scottish, German, Austrian, and Swiss-German ancestry. 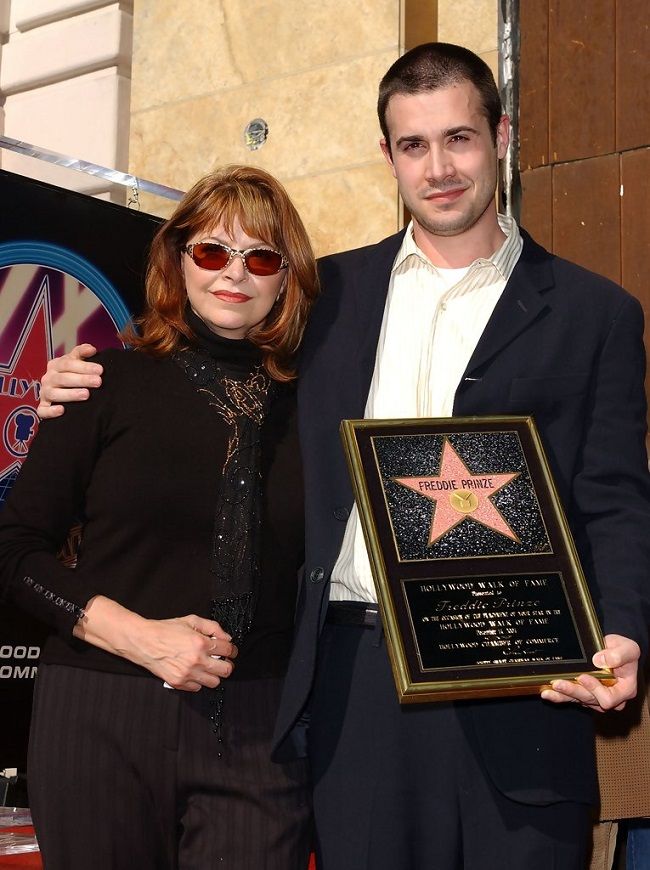 Talking about his educational background, he graduated from La Cueva High School in the year 1994. It is located in Albuquerque, New Mexico. Later, he joined a culinary school in Pasadena, however, he dropped out when he landed his first film role in For Gillian on her 37th Birthday.

Moreover, he moved to Los Angeles to audition for TV roles after his high school graduation, where he resides today with his wife and children.

Additionally, he enjoys martial arts, swimming, and tap dancing. Also, he likes collecting comic books. He was also a Junior Golden Gloves winner as a teenager. Moreover, he holds black belts in American Kenpo karate and American tang soo do karate, and a blue belt in Gracie/Brazilian jiu-jitsu.

Freddie appeared in a guest role on the ABC TV series Family Matters in the year 1995. He then starred in a few programs and made-for-TV movies. Later, he made his motion picture debut with To Gillian on Her 37th Birthday in the year 1996. In the following years, he starred in youth-oriented movies I Know What You Did Last Summer in 1997 and its sequel I Still Know What You Did Last Summer in 1998. These movies made him known to teenage audiences.

Further, his first leading role is in the romantic comedy She’s All That 1999. He was supposed to be in I’ll Always Know What You Did Last Summer in the year 2006 with Brandy and Jennifer again, However, they changed the script and left them out.

Besides appearing in movies, he is also named one of People magazine’s 50 Most Beautiful People in the year 2000. The same year in September, People included him on the Best-Dressed List. Before his international fame and recognition, he also auditioned for the role of Stu in Scream in the year 1996. 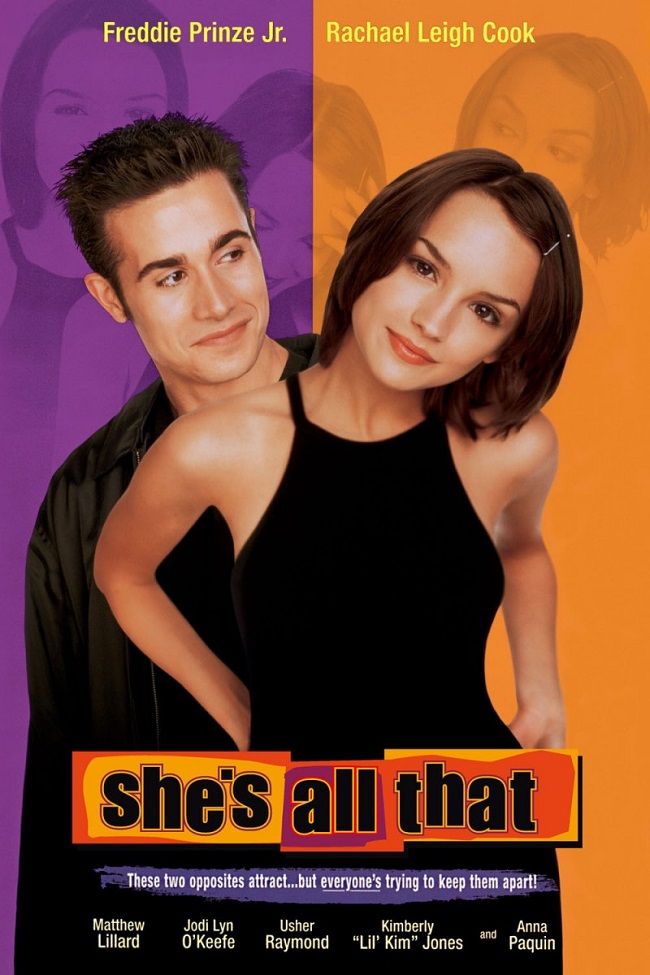 Caption: Freddie Prinze Jr. in the movie poster of “She’s All That”. Source: Old Millennials Remember

Details about his movies

Later, he disclosed that the hardest part about filming Scooby-Doo (2002), aside from being homesick, was that he had to constantly re-dye his jet-black hair blonde to match his character, Fred. After they were done filming the movie, he had to shave his head because the constant bleach ruined his hair.

Further, as a fan of pop culture, he initially turned down Raja Gosnell’s offer to star in Scooby-Doo (2002) because he felt it would not be respecting the original series. However, his real-life love Sarah Michelle Gellar talked him into it. Moreover, in March 2006, he ran his first marathon, The Los Angeles Marathon XXI, with a 05:50:49 finishing time. For this event, he used the name “Freddie James”.

He voiced a pilot in a Vatta’s War: Trading in Danger graphic audiobook. He also voiced different characters in BioWare video games: Lieutenant James Vega in Mass Effect 3 and The Iron Bull in Dragon Age: Inquisition. Also, he then returned to the role of James Vega again for the animated feature film Mass Effect: Paragon Lost, dubbed by FUNimation. Then, from the year 2014 until 2018, he was the voice of Kanan Jarrus, one of the last surviving Jedi Knights, on the Disney XD series Star Wars Rebels.

He is a WWE fan and he was seen on television in attendance at the March 2008 WrestleMania XXIV pay-per-view as well as its preceding Hall of Fame ceremony. He also made a cameo on an episode of The Dirt Sheet. It is an online program hosted by wrestlers John Morrison and The Miz. Additionally, he had also created an official profile on WWE’s “Universe” blog community where he would regularly write his thoughts about the current goings-on in the world of WWE.

Furthermore, he appeared on Raw as a special guest host on 17 August 2009. he was assaulted by The then WWE Champion Randy Orton assaulted he after he refused to bail Orton out of his tag team match with John Cena. Orton was due to challenge John Cena in the upcoming SummerSlam.

Later on 1st October 2010, he returned to WWE in a role as producer and director. On the episode of November 1, 2010, of Monday Night RAW, he made an on-screen appearance as Vince McMahon’s doctor. It was a dream sequence scene that coincided with Linda McMahon’s attempt in trying to win a seat in the Senate for the state of Connecticut.

Moving on, he bought a $3 million, 5-bedroom, 4000 square foot house in the San Fernando Valley in September 2000. He has a net worth of 19 million dollars. His involvement in movies, TV shows, etc influences his net worth. Additionally, his wife is also an actress whose net worth estimation is $20 million,

Talking about Freddie’s body measurement stats, he stands tall at a height of 1.85 m, which equals 6 feet or 73 inches and his weight is around 70 kgs. Other than these, there is no information about his chest-waist-hip, biceps, dress size, shoe size, etc. Nevertheless, he has black hair and dark brown hair color. However, due to aging, his hair is slowly turning grey.

Talking about his social media presence, he has 898k followers on his Instagram handle @realfreddieprinze with 352 posts as of March 2020. Moreover, he is also available on Twitter with the handle @RealFPJr. He joined Twitter in August 2014 and so far has 143.4k followers.

He is also a part of a Youtube channel “GeggHead” – Good Evening & Good Game. The channel exists in this realm to make viewers laugh at nerdy stuff like Board/Deck Games, Video Games, Table Top Games, Combat Sports MMA, Sketch Comedy, and more. They created the channel on 13 February 2018 and they also have a Facebook page with the same name.