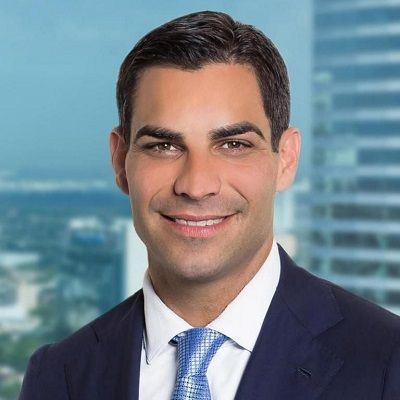 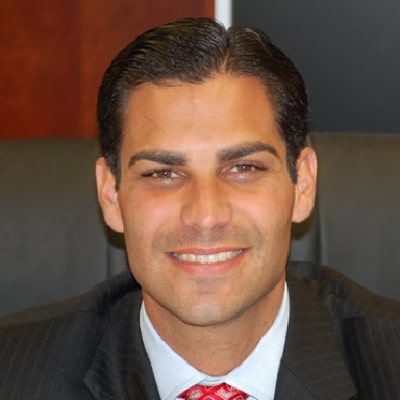 Francis Suarez is an American attorney and politician. Francis Suarez is serving as the 43rd mayor of Miami. He was recently tested positive for the coronavirus that is causing the COVID-19 pandemic around the world.

Miami Mayor tested negative for the first time after 17 days!

Miami Mayor Francis Suarez became one of the first U.S. elected officials to test positive for the new coronavirus. He shared the news on Friday, 13th March. He had been in the same room as someone who had tested positive for Covid-19.

Soon after learning this, the Mayor went for his own test, and sadly, he also tested positive. Suarez also mentioned that his immediate family, parents, wife, and kids, have also tested negative.

As an elected official, Mayor Suarez shakes a lot of people’s hands. He said that everybody who has come into direct contact with him tested negative for the virus.

In the event that he attended, several other U.S. politicians also attended, including Miami-Dade Mayor Carlos Gimenez, Senator Rick Scott, and President Donald Trump. Both Trump and Gimenez tested negative for the virus while Scott went into self-quarantine.

Following the result, Suarez went on self-quarantine. His wife and children went to stay with family, while he hunkered down in their home. Although he speaks with them regularly on FaceTime, he can’t hug them or kiss them.

He shared his initial thoughts:

When I got my own results a day later, I experienced a wave of anxiety, doubt and fear. My mind raced: What does this mean for me? How will my body react? How will this affect my city and those who may have come into contact with me? For a moment, the uncertainty felt crippling.

On his live-blog, Suarez updated that he tested negative for the first time in 17 days. Sharing the fantastic news with the viewers, he also thanked everyone for abiding by the rules and staying home and staying safe.

In the video, he also mentioned that the Miami Mayor is feeling fantastic. He will be testing his corona status the day after as well, on 31st March.

Hence, Suarez hopes that he will test negative again and it will be his last test for the pandemic. Suarez is among those lucky ones who experienced little to no symptoms even after testing positive for the virus.

Even at the time when he is directly affected by the pandemic, Suarez is constantly thinking about the city and its residents. He said:

The challenge has now become how to lead the city remotely and ensure that the wheels of government keep turning. My duties typically involve lots of physical interactions with city residents. With that no longer possible, the dynamic of my job has changed immensely, requiring my staff and me to be creative in how we work.

Francis Suarez’s full name is Francis Xavier Suarez and he was born at Mercy Hospital in Miami, Florida. Similarly, his birth date is October 6, 1977. And is currently 43 years old.

Suarez is the eldest among his siblings and an only son to parents Xavier and Rita Suarez. He has three younger siblings.

Moreover, his father was the first Cuban-born mayor of Miami in 1985 and currently serves as a Miami-Dade County commissioner. Growing up around his father’s office at City Hall

, the same one he works out of today, young Suarez already had exposure to public service.

Talking about his love life and marital status, Suarez is a married man. His wife is Suarez is Gloria Fonts Suarez. The couple has a son named Andrew Xavier and a daughter named Gloriana Pilar.

Moving on to Suarez’s educational background, he graduated from Immaculata-Lasalle High School in Coconut Grove. He then earned a bachelor’s degree in Finance from Florida International University, graduating in the top ten percent of his class.

Before running for public office, Suarez founded a successful real estate firm. It was also before moving on to practice law. At present, Suarez is an attorney with the law firm Greenspoon Marder. It specializes in real estate and corporate transactions. 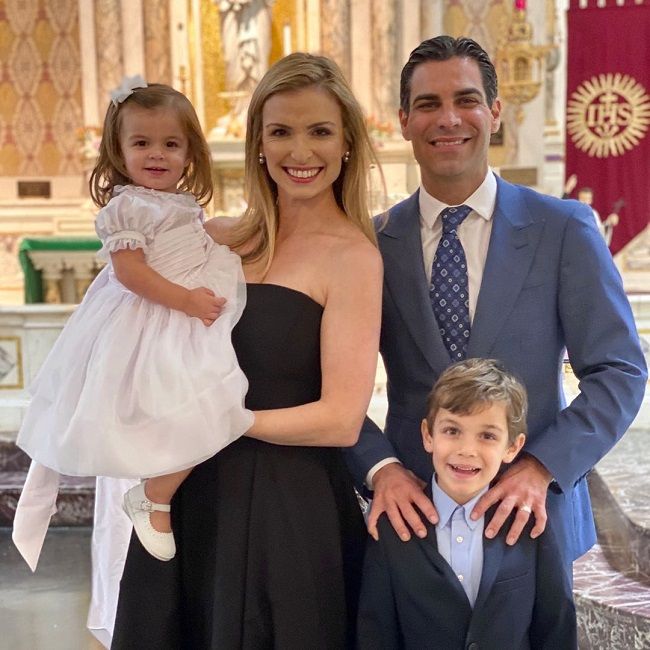 Caption: Francis Suarez in a portrait with his wife and children. Source: Instagram

Francis Suarez is the 33rd Mayor of the City of Miami. As the first Miami-born mayor, Suarez commits to working diligently to serve the residents of the community where he grew up.

Prior to being elected with 86%support from Miami residents, Mayor Suarez served as Miami Commissioner for District 4 for eight years.

Miami Mayor Suarez had many legislative accomplishments as Commissioner.

It includes implementing ShotSpotter technology in the City – a state-of-the-art gunshot detection system and setting up a transportation trust fund that allocates funds for current and future transit projects.

As a result of this, the City’s lawsuit reached the U.S. Supreme Court, which ruled that cities have the standing to sue banks under the Fair Housing Act for such discriminatory practices.

As a member of the Miami City Commission from the 4th District, Suarez served the office since November of 2009 till the same month in 2017. He succeeded Tomás Regalado and Manolo Reyes succeded Suarez.

Moreover, Suarez assumed office as the Mayor of Miami on November 15, 2017.

Mayor Suarez also serves as Chair of the Environment Committee and the Mayor is also on the Advisory Board of the U.S. Conference of Mayors.

The Mayor takes a leading role in collaborating with fellow mayors from around the country to preserve the environment and develop programs and policies that directly benefit the City of Miami.

In his role at the TPO, the Mayor championed the Strategic Miami Area Rapid Transit (SMART) Plan. It was unanimously approved.

The Miami Mayor helped negotiate the Tri-Rail connection to Downtown, offering free ridership to Overtown residents for life. He also signaled in the free trolley system in Miami, which carries an average of 450,000 passengers per month.

Moreover, Miami Mayor Suarez is dedicated to elevating the quality of life of the residents he serves by focusing on transportation and connectivity, resiliency, and job creation by nurturing the growth of technology and innovation.

Suarez is also committed to expanding affordable housing, tackling the poverty pandemic, and, as a corollary, reducing crime. 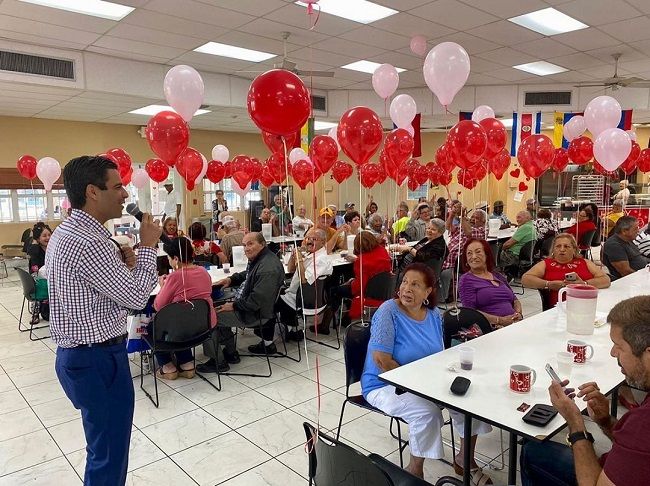 Caption: Francis Suarez believes that there is no better way to celebrate unconditional love than with abuelitos throughout Miami. Source: Instagram

On 2 March 2020, Francis Suarez responded to the ongoing coronavirus outbreak by announcing preparations for a potential outbreak in Miami.

Although there were no reported or confirmed cases in Miami, two cases were confirmed by the U.S. Centers for Disease Control and Prevention (CDC) in other areas of the state of Florida.

Then, on March 4, 2020, Mayor Suarez announced plans to cancel the upcoming Ultra Music Festival, stating that the tourists attending would greatly enhance the likelihood of Miami having cases of COVID-19.

Further, on March 6, 2020, the Mayor and the Miami municipal government responded to the outbreak. By then, there were even more confirmed coronavirus cases in the state of Florida.

Hence, the municipal government responded by canceling not only the upcoming Ultra Music Festival but also the upcoming, local Calle Ocho Festival as well. Mayor Suarez and two other city officials confirmed this during a press conference.

Later, Mayor Suarez himself was infected with the virus. He confirmed the news during an interview with Miami Herald. It was on March 13. The Mayor was the second person confirmed to be infected in Miami-Dade County.

Sadly, there is no information about the handsome Mayor’s body measurements. Nevertheless, he has black hair and hazel eyes.

Francis Suarez is active on social media. He joined Twitter in June 2012 and so far has 24.4K followers.

He frequently updates his Twitter and his most recent ones are his live blogs at the time of self-quarantine after testing positive for coronavirus in mid-March 2020.

The Mayor also has another Twitter with the username @MiamiMayor in which he has 10.3k followers. He created this account in February 2018. We can also contact the Mayor at [email protected]