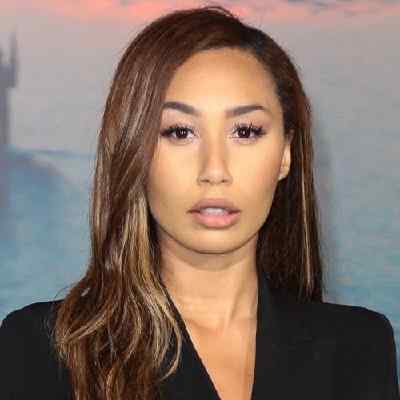 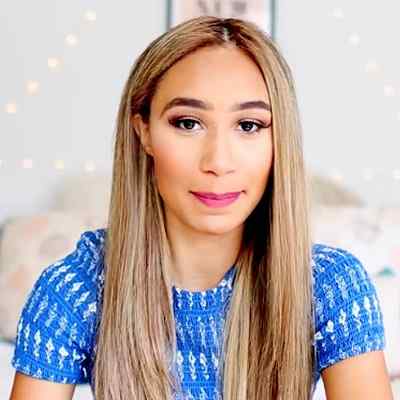 Eva Gutowski is an American YouTube influencer and actress with more than 11 million subscribers on Youtube. Eva Gutowski posts videos about all things relating to beauty on her verified YouTube channel MyLifeAsEva.

Eva Gutowski is 28 years old. She was born on July 29, 1994, in Brea, California, United States, under the astrological sign of Leo. Her mother’s name is Ericka Gutowski she is an entrepreneur. Similarly, she has one younger sibling; a sister named Maya Gutowski. Her sister is also a social media personality who owns her personal YouTube channel.

She dreamed of being an actress or possibly a psychiatrist growing up. But, as she grew older, she identified she wanted to be an entertainment host and reporter. She holds an American nationality and is of African American, German, Irish, Polish, and Puerto Rican ethnicity. 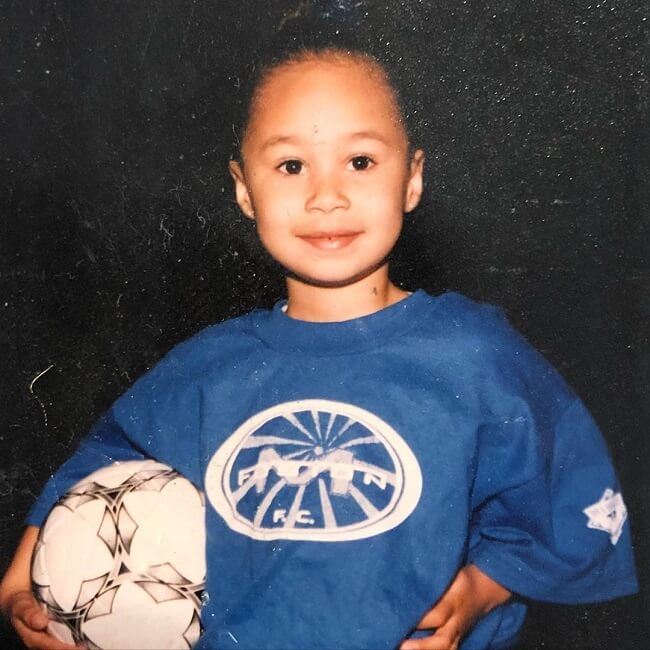 Caption: Eva Gutowski in her childhood photo posing with her football (Source: Instagram)

Moving toward her educational background, she graduated from Brea Olinda High School in Brea, California. then, she went to California State University at Fullerton where she pursues a degree in Broadcast Journalism as her major.

Professionally Eva Gutowski is a famous YouTube vlogger and beauty guru who gained fame through her channel ‘MyLifeAsEva’ She posts videos on things associated with beauty and fashion. Growing up,  she aspired to become a screen diva or a psychiatrist, but destiny had something else in store for her and constantly she got drawn toward becoming a reporter and entertainment host.

Before her social media fame, she served in a mom-and-pop pizza shop as a cashier. She launched her YouTube channel MyLifeAsEva on July 25, 2011. However, she has been active on Youtube since 2012. She primarily posts related to beauty and fashion. Her videos primarily addressed young adults and teens and encompass tutorials on fashion, hair, and makeup. Eventually, she started garnering immense popularity, and as of now, her YouTube channel has garnered more than 11.2M subscribers. The channel has almost accumulated 1.2 million total views.

Some of her best YouTube videos include “How to Survive High School: Your First Relationship!” with 30M views, “Literally My Life (OFFICIAL MUSIC VIDEO) with 47M views, and “High School You Vs. Child You!” with 31 million views.

She also created another secondary YouTube channel, Glogowski, by mylifeaseva on March 5, 2013. Her channel has gained 1.65 million subscribers on the channel. She posts vlogging videos on this channel.

The most popular uploads on her channel include “Why I’m Breathing.,” “How To Get Mermaid Hair | VLOGMAS DAY 4!,” and “I CONVINCED BRENT TO COME WITH ME TO HAWAII! | VACATION VLOG.” 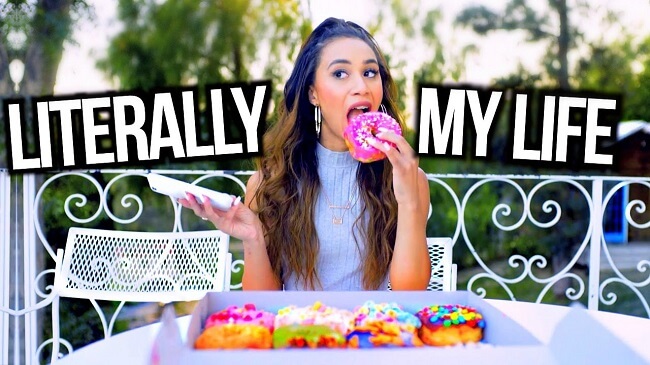 Likewise, she was part of the ‘Girls Night In’ tour alongside her other YouTube fashion and lifestyle personalities like  Alisha Marie, Mia Stammer, Sierra Furtado, Andie Case, and Meredith Foster. It is the first all-female tour presented by ‘Fullscreenlive’ which toured 20 cities across the US from September 22, 2015, to October 22, 2015.

In her early twenties, she has already achieved many feats including being marked as one of the fastest-growing stars on YouTube. Similarly, she ranked #4 in Variety’s Famechangers Digital Star Ranking list. She is YouTube’s fastest-growing star. She has even been covered in Billboard’s Social Media Stars list.

In mid-2016, she performed herself on the show titled “The Journalist.” For the first season of Escape the Night, she played the main role and returned briefly in the second season’s pilot episode. Similarly, she is the author of a lifestyle and advice book titled My Life as Eva: The Struggle is Real. She even appeared in a YouTube Red web series called Me and My Grandma that premiered on her Youtube channel on March 22, 2017. She got high success from the following series.

In August 2017, MTV announced that she would join the revamped Total Request Live as part of a rotating social media personality alongside fellow YouTubers, Gabbie Hanna, and Gigi Gorgeous. In 2019, she made an appearance in a PETA ad, protesting marine parks that keep mammals and other animals imprisoned in tanks.

Speaking on Eva Gutowski’s earnings, she is a famous YouTube personality who has immensely garnered social media fame and has earned a decent sum of money. Her main source of income is the YouTube video. As of 2022, her estimated net worth is around $3 million. Additionally, she also earned through other promotional events and other appearances. With her good social media fame, she is living a lavish life.

Reflecting on Eva Gutowski’s relationship status, she is in a relationship and began dating Olav Stubberud in 2020. She often keeps on posting beautiful duo pictures on her Instagram handles. There is no sign of their breaking up any time soon and enjoying their duo life together. 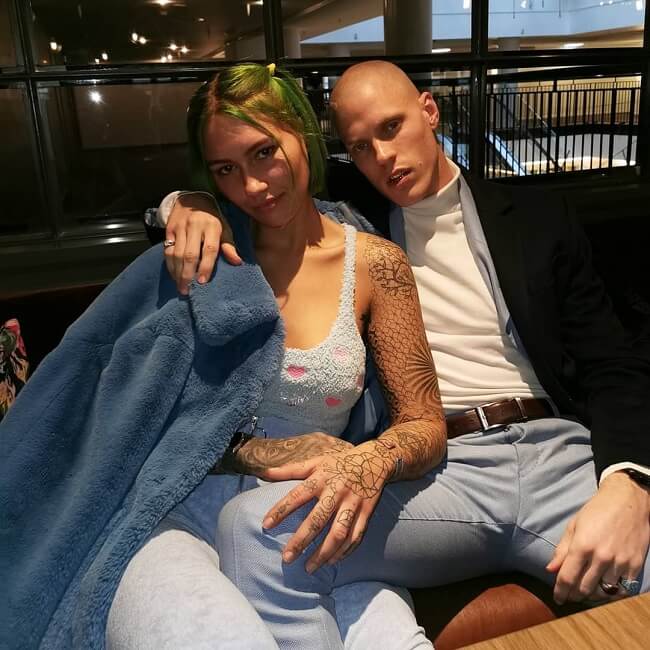 Caption: Eva Gutowski posing for a photo with her boyfriend, Olav (Source: Instagram)

Talking about the previous link, she was in a relationship with Brent Rivera in 2019 and has also dated Adam Bartoshesky from 2016 until 2018. Moreover, she also previously got linked with Andrew Kingsbury and Alex Hayes.

Similarly, she is vegan and says she likes to do her cooking because “I know whatever I put into what I cook is healthy.” In September 2016, she came out as bisexual to her followers on her Twitter platform. She even tweeted, “I am ready for myself to fall in love with someone, no matter who they end up being, and have been since I was 12. Boy or girl.”

There is no information regarding her involvement in any kind of controversial acts and scandals. Moreover. Eva Gutowski has successfully maintained a good profile on social media among her immense fan followers.

As of August 2018, she announced on Twitter that her car got rear-ended by a woman texting while driving. She also said that she wasn’t in the car, but the lady was sent to the hospital, and her car got fixed 3 months later.

Eva Gutowski stands a good tall height of 5 feet 5 inches tall (1.69 m) and weighs around 57 kg. Her body measures 32-23-34 inches (81-58.5-86 cm) i.e. Breasts, Waist, and Hip size respectively. She has a pair of dark brown eyes with brown hair color. In addition to this, she often dyes her hair with different hair colors like blonde, pink, etc.

She owns two YouTube channels. Her main YouTube channel MyLifeAsEva with more than 11.2M subscribers, and has over 1.65M subscribers on Grotowski by mylifeaseva. She is also active in lip-syncing and creative content creating the app TikTok with more than 5.9 million followers and 63.5 million likes. In addition to this, she has provided her email id [email protected] for any kind of business inquiries.