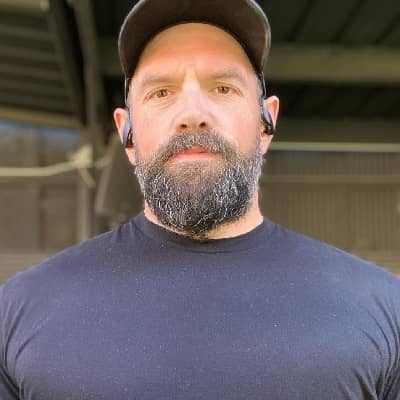 Ethan Suplee is a prominent American film and TV actor. Ethan Suplee is famous for his role in popular American films and TV shows including “The Hunt”, “The Wolf of Wall Street”, “Walk of Shame”, “Art School Confidential”, “The Butterfly Effect”, “Entourage”, “The Ranch”, etc.

Ethan Suplee was born on May 25, 1976, and he is currently 44 years old. He hails from Manhattan, New York City, and his zodiac sign is Gemini. Talking about his family, his parents are Debbie and Bill Suplee. His father, Bill Suplee later played Willie the role of One-Eyed Mailman in My Name Is Earl.

Moreover, his parents were actors and they met while performing summer stock and they also appeared on Broadway. On the Your Welcome show, he shared that he dropped out of school at the young age of 14 years. 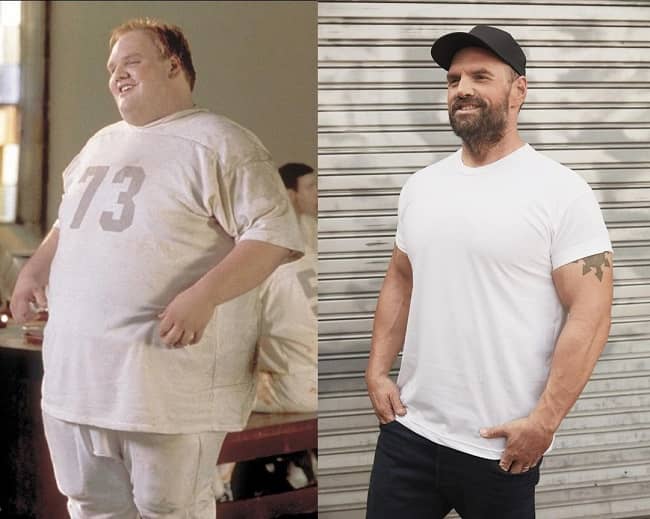 Caption: Ethan Suplee in a before and after comparison photograph. Source: Instagram

Professionally, Ethan Suplee is a film and TV actor. The actor is most popular for his roles in films like American History X, Without a Paddle, Remember the Titans, and The Wolf of Wall Street among others. Likewise, he has also starred in several of Kevin Smith’s films. Furthermore, he also appears as Frankie in Boy Meets World and as Randy Hickey in My Name Is Earl.

As an actor, his first major role was as Willam in Mallrats. This comedy film’s director is Kevin Smith. For this film, he worked with his future My Name is Earl co-star, actor Jason Lee. The famous actor also starred briefly in Drawing Flies. Its producer is Kevin Smith View-Askew.

Director Kevin Smith cast both Ethan Suplee and Jason Lee once again. This was for the later films Chasing Amy and Dogma. The actors also make cameo appearances in Clerks II. During the time when he was filming for the film Mallrats, the actor also had a recurring role as Frankie “The Enforcer” Stechino. It was in the series Boy Meets World which ran from the year 1994 to 1998.

Additionally, Suplee’s dramatic performances include the roles of Seth in American History X. Seth is the ruthless Nazi skinhead. Likewise, his other notable performance is as a man who rapes a clown in Vulgar. He also played the role of Thumper in The Butterfly Effect. 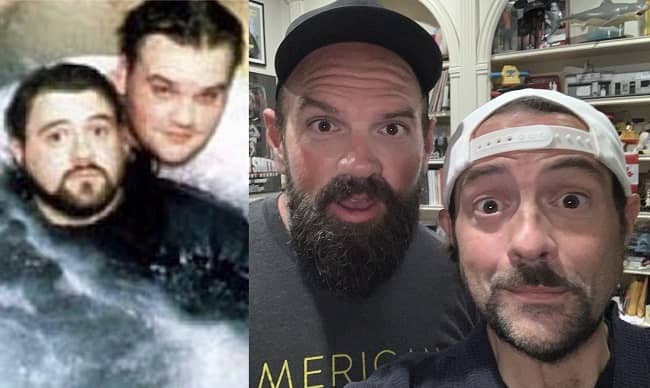 Caption: Ethan Suplee in past and present photographs with Kevin Smith. Source: Twitter

Likewise, he portrayed the role of a football player named Louie Lastik in Remember the Titans and also appeared as Tuna in Blow. Tuna is actor Johnny Depp’s buddy and initial drug-dealing partner in the aforementioned movie.

Similarly, he played the role of the simpleminded character named Pangle in Cold Mountain. The famous American actor also made a cameo appearance in Entourage. It is an HBO TV series. He also appeared on Queens Boulevard. It is a fictional movie.

Moving forward, Suplee also cast in Jennifer Falls in the year 2014. It is a TV Land original sitcom and while working on this project, he reunited with My Name Is Earl co-star, actor Jaime Pressly. Also, in the year 2016, an actor he started playing the role of D in Chance. He also portrayed the character of a police officer named Billy “Beer Pong” Tompkins on The Ranch. 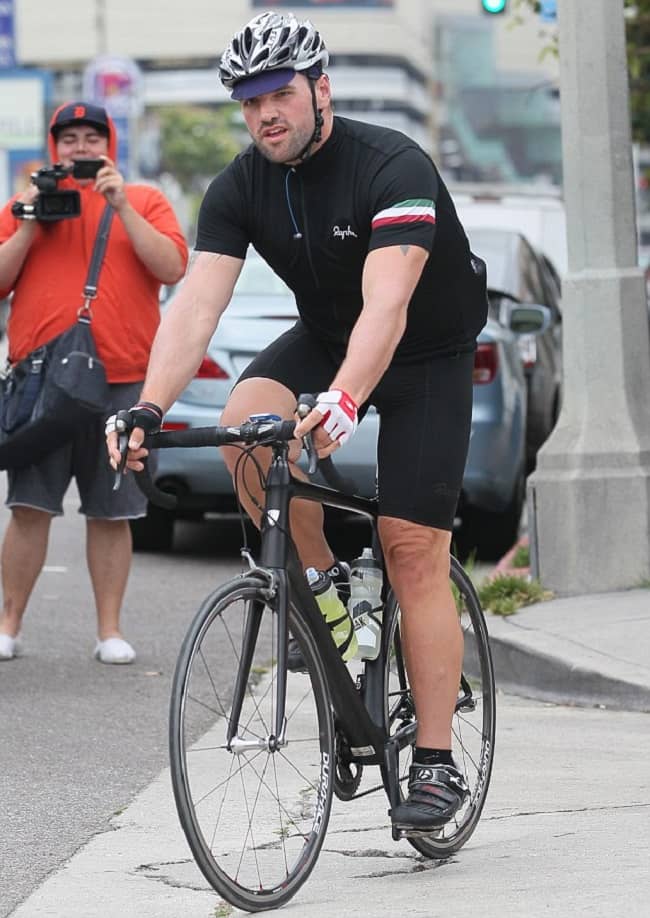 Ethan Suplee often portrayed the role of dim-witted brute characters due to his body size. It was because he was a large young actor on the upside of 300 pounds. The actor later lost over 100 pounds by the year 2005. It was possible due to a sugar-free diet. Then in March 2011, TMZ on TV featured the actor on its show with a weight loss of 200+ pounds. The actor credited cycling for his fit frame and he said, “I ride road bikes, I ride bicycles”.

Moving on to his friendships with other Hollywood actors, he is an old friend of prominent actor Leonardo DiCaprio. Likewise, the actor is also good friends with actor Stza of the band Star Fucking Hipsters. As a close friend, he actually agreed to appear in the band’s music video for the song 3000 Miles Away. Furthermore, he is a Scientologist.

Talking about his romantic relationships, Suplee tied the knot with Brandy Lewis in the year 2006. Even after 15 years of marriage, the couple is going strong in their romantic relationship. Brandy Lewis is the younger sister of actress and singer Juliette Lewis. Moreover, he and Brandy share four children namely Lily Lewis, Francis Clementine Suplee, Bella Lewis, and Billie Grace Suplee. Bella was born in 1997, Lily in 1998, Clementine in 2005, and Billie in the year 2007. 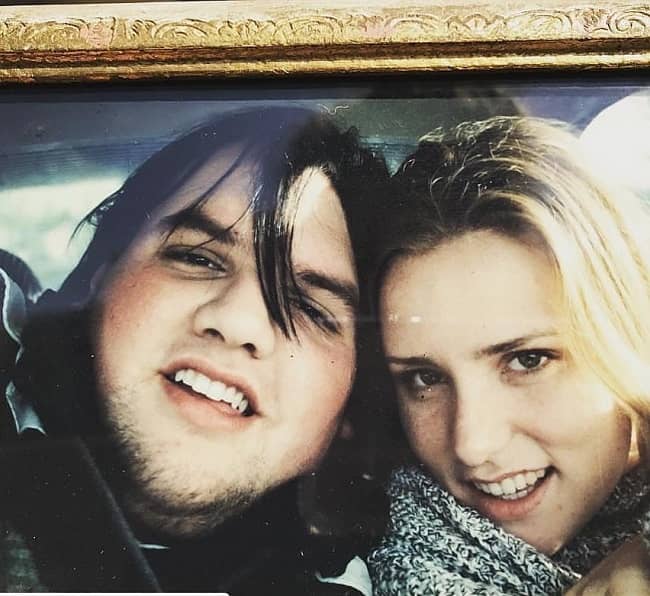 Caption: Ethan Suplee posing for a photo with his wife in an old photograph. Source: Instagram

Ethan Suplee stands tall at an approximate height of 1.85 meters or 6 feet. Similarly, the actor lost his weight and went from 550 pounds to 255 pounds (appx. 115 kgs). He is still working on losing more bodyweight. He has brown eyes and hair of the same color.

Ethan Suplee goes by @EthanSuplee on Twitter. On this account, the actor has earned over 1 million followers since April 2009. Likewise, the actor is available under the username @ethansuplee on Instagram. This account boasts exactly 332 posts shares and over 482k followers while writing this biography. Moving on, Suplee has an estimated net worth of approximately $8 million US dollars.