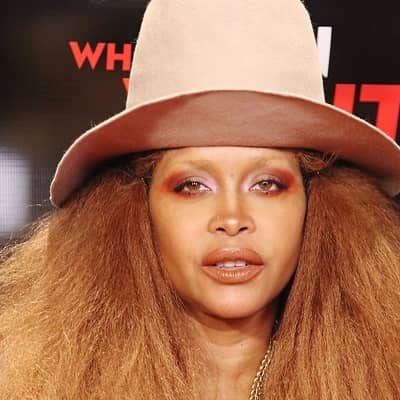 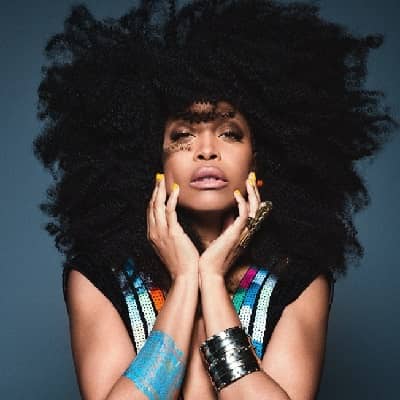 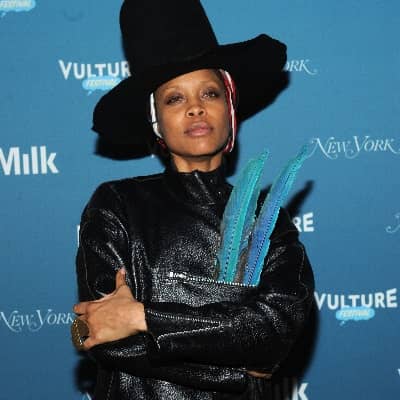 Erykah Badu was born Erica Abi Wright. She was born on 26th February 1971. She is from Dallas, Texas, USA. At present, she is 50 years old and her sun sign is Pisces. She was raised and taken care of by her actress mother, Kolleen Maria Gipson. Badu was exposed to the arts early on. Therefore, Badu danced and sang for her mother from a very young age, and she began to perform in shows at the local ‘Dallas Theater Center’.

She went to Booker T.Washington High School. She bloomed at the arts magnet school, focusing on singing and dance. Moreover, she was also active in the Dallas music community during this time and even started freestyling on a local Dallas radio station under the name DJ Apples.

Following her graduation from high school, she attended Grambling State University. Moreover, she majored in theater and minored in quantum physics. Likewise, in the year 1993, she left Grambling to pursue her career in music. Badu served as a drama teacher and as a waitress while she recorded a demo.

Further, she got the attention for her demo music of music producer ‘Kedar Massenburg,’ and in 1996 signed her, and paired her with D’Angelo to record the song “Your Precious Love”. Therefore, Kedar Entertainment, then a small start-up label, later merged with Universal Motown. 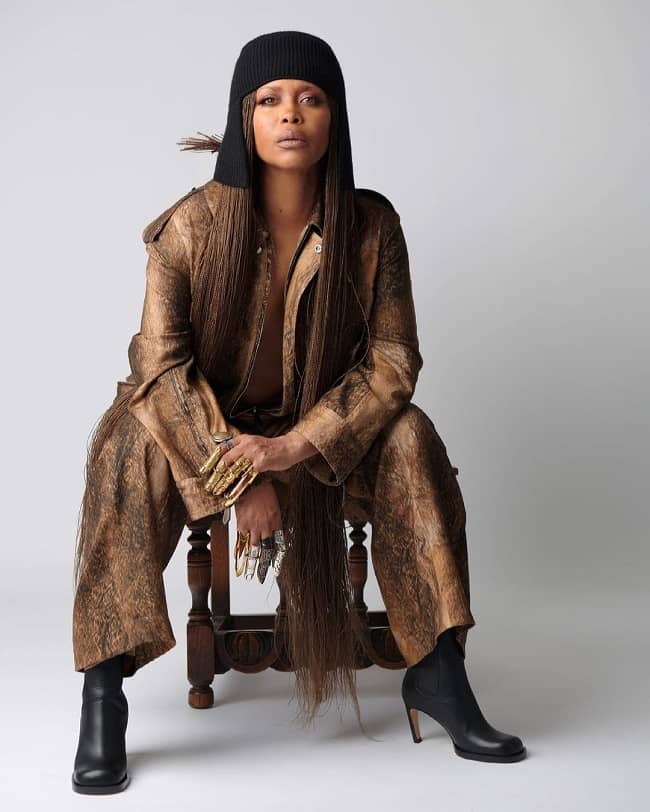 Erykah’s debut album ‘Baduizm’ exploded onto the music scene in the year 1997. And along with hits like “On & On,” “Next Lifetime” and “Appletree”. Likewise, the album marked a shift in the music of its time and started what was labeled a “neo-soul” movement. The album ‘Baduizm’ received critical acclaim and won her two Grammy Awards. The awards for best female R&B vocal performance and best R&B album.

Likewise, later that year, she released her second LP, Live. Badu’s talent started with the album’s breakout song “Tyrone”. It was completely improvised on stage. Badu got together with the distinguished hip-hop group Roots to create the song “You Got Me” in the year 1999.

She won Grammy gold again with the song, therefore, taking home the trophy for best rap performance by a duo or group. Badu also made her hit debut, portraying the heartbreaking, tortured character Rose Rose in The Cider House Rules in the same year.

Similarly, her third album ‘Mama’s Gun’ was released in the year 2000. Badu also contributed to the soundtrack of the Spike Lee film Bamboozled. Babu went on tours in the following years, on her “Frustrated Artist Tour,” and in the year 2003, she released ‘Worldwide Underground’. Likewise, the song “Love of My Life Worldwide” features Angie Stone, Queen Latifah, and Bahamadia. And, this again won Badu a Grammy, this time for best R&B song. 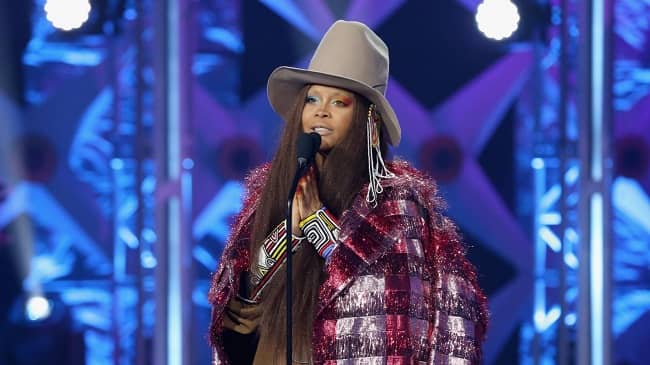 In 2013, Badu handed back to the community in which she had grown up by transforming the dilapidated Black Forest Theater in downtown Dallas into a space for charity events and theater. Also, it would serve as the offices for her nonprofit, B.L.I.N.D. B.L.I.N.D means Beautiful Love Incorporated Nonprofit Development, which she founded in the year 1997. Therefore, as a means of leading culture and arts to inner-city areas to cultivate change.

Likewise, in 2004, she participated in the film Dave Chappelle’s Block Party, performing several songs with fellow R&B superstars. And, in the following year, she launched her own music label, Control FreaQ Records. Moreover, the label’s primary mission is to allow its artists creative freedom. 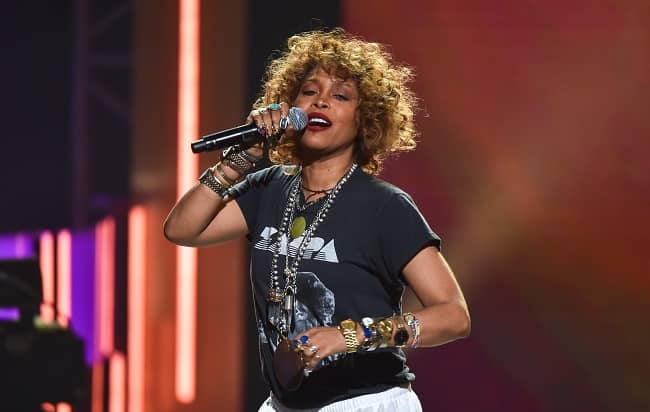 Caption: Erykah Badu while performing on the stage. Source: NME

Badu got comments that occurred in a January 2018 article in Vulture. Therefore, after refusing to judge comedian ‘Bill Cosby’ on the accusations of sexual assault against him, she said,

“I see good in everybody. I saw something good in Hitler.”

And, asked to elaborate, she pointed out that Hitler was a painter, adding;

“He had a terrible childhood. That means that when I’m looking at my daughter, Mars, I could imagine her being in someone else’s home and being treated so poorly, and what that could spawn. I see things like that.”

Again, Badu waded into controversy the next year with her views toward singer R. Kelly. R.Kelly was facing accusations of sexual abuse. Therefore, during a January concert in Chicago, he drew boos when she said she was

“putting up a prayer right now for R.”

“I love you. Unconditionally. That doesn’t mean I support your poor choices. I want healing for you and anyone you have hurt as a result of you being hurt. Is that strange to you ? That’s all I’ve ever said. Anything else has been fabricated or taken out of context.”

And, Puma’s father is a rapper, The D.O.C. Badu welcomed her third child, a girl named Mars Merkaba Thedford on February 1, 2009, with her boyfriend of five years, rapper Jay Electronica. Later, she dated Carl Jones from 2013 to 2018. 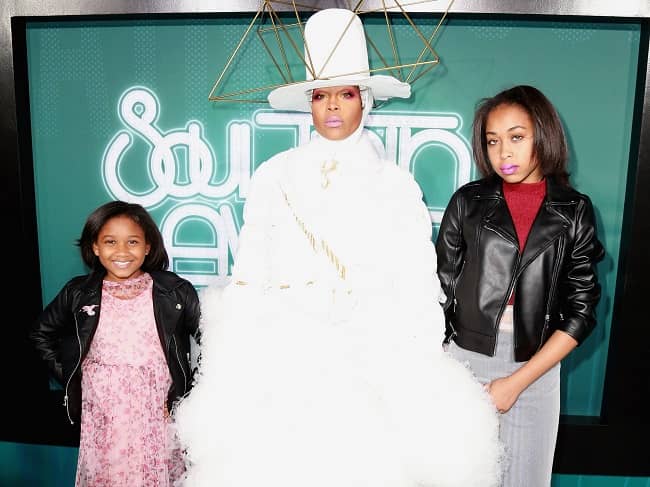 Badu is 5 feet tall and weighs around 60 kilos. Her eyes are of dark brown color whereas her hair is of black color. She has an amazing and attractive personality. Other measurements like chest-waist-hip, shoe size, dress size, etc are not given on the internet. However, she has a good and fine body physique.

This talented personality surely has earned a huge amount of money throughout her career. Her estimated net worth is around $10 million.