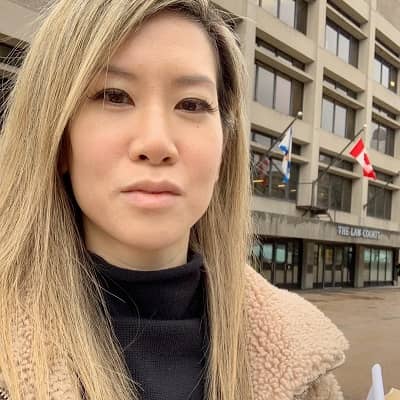 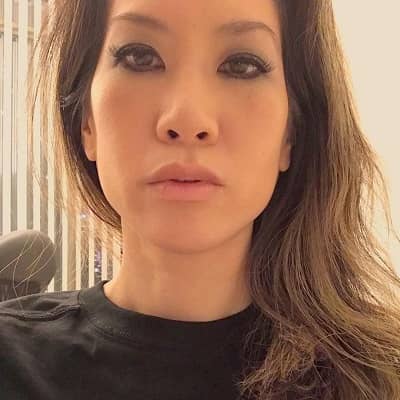 Dr. Debra Soh is a young and talented Canadian author, columnist, and sex neuroscientist. Dr. Debra Soh is widely popular for her book “The End of Gender: Debunking the Myths about Sex and Identity in Our Society”.

Dr. Debra Soh was born on September 6, 1990, and she is currently 31 years old. Debra hails from Toronto, Canada, and her zodiac sign is Virgo. Talking about her educational journey, Debra Soh holds a Doctor of Philosophy degree in sexual neuroscience.

She attended York University in Toronto for both her Master’s and Ph.D. degrees. Before this, Debra Soh attended Ryerson University for her Bachelor’s degree in Science. There is no information regarding Debra Soh’s parents, siblings, and other family details.

Professionally, Dr. Debra Soh is a science columnist and author. She is also a political commentator and former academic sex researcher. Moreover, Dr. Debra Soh is also famous as a neuroscientist. She specializes in gender, sex, and sexual orientation.

She is also famous for authoring the book The End of Gender: Debunking the Myths about Sex and Identity in Our Society. In this book, Dr. Debra Soh has unmasked popular misconceptions about the nature vs. nurture debate. The writer also explored what it means to be a woman or a man in today’s society. Further, this book is based on Dr. Debra Soh’s research and published the book on 4 August 2020.

Before this, Debra Soh was a weekly columnist and resident sex scientist working for Playboy.com. Moreover, Debra Soh has also appeared in several popular shows like the Joe Rogan Experience, The Megyn Kelly Show, and Real Time with Bill Maher among others. 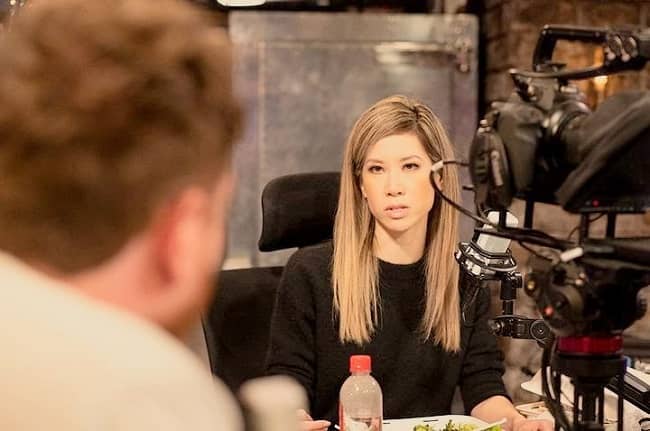 Recently in the year 2021, Dr. Debra Soh delivered an invited address as well as Q&A at the Oxford Union. Dr. Debra Soh has also hosted Quillette’s Wrongspeak podcast with Jonathan Kay in May 2018. Then in a 2015 editorial, Dr. Debra Soh criticized the prevalence of childhood gender transitions. Dr. Soh advised parents and doctors alike to wait until a child reaches cognitive maturity.

Likewise, her essay referenced gender non-conforming aspects of her childhood. This essay argued that “a social transition back to one’s original gender role can be an emotionally difficult experience.” Similarly, Dr. Debra Soh has also written against anti-conversion therapy laws. She believes that such laws conflate sexual orientation and gender identity and prevent legitimate therapeutic counseling for individuals with gender dysphoria.

Furthermore, Dr. Debra Soh opposed the 2015 decision to close Toronto’s gender identity clinic. This clinic was famous for beginning treatment after or during puberty in most cases. The following year, she wrote an editorial criticizing CBC News. This was because CBC News canceled its airing of a British documentary that featured Zucker.

Then in August 2017, Dr. Debra Soh wrote a column for The Globe and Mail. She also contributed to an article at Quillette defending engineer James Damore’s memo Google’s Ideological Echo Chamber. 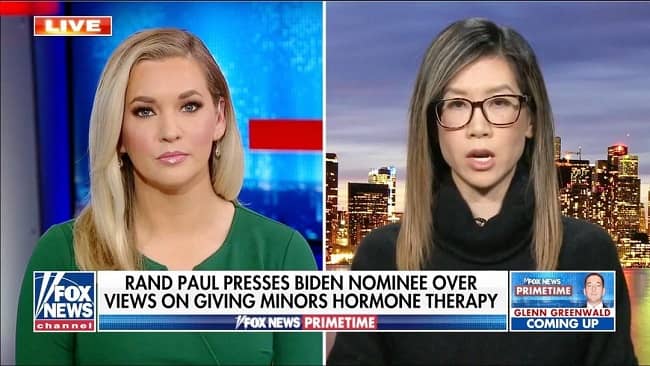 Additionally, as a journalist, Dr. Debra Soh also writes about the science of human sexuality, politics, and censorship in academia. The New York Times also profiled Dr. Soh as one of The Renegades of the Intellectual Dark Web while she appeared in Penthouse Magazine in the December 2018 cover story. She also appeared on Penthouse Crush.

Moreover, several scientific journals like the Archives of Sexual Behavior and Frontiers in Human Neuroscience have published Dr. Soh’s work. Further, in the year 2019, Dr. Debra Soh testified as an expert witness in Grabher v. Nova Scotia Registrar of Motor Vehicles. She testified in the Nova Scotia Supreme Court in Canada. 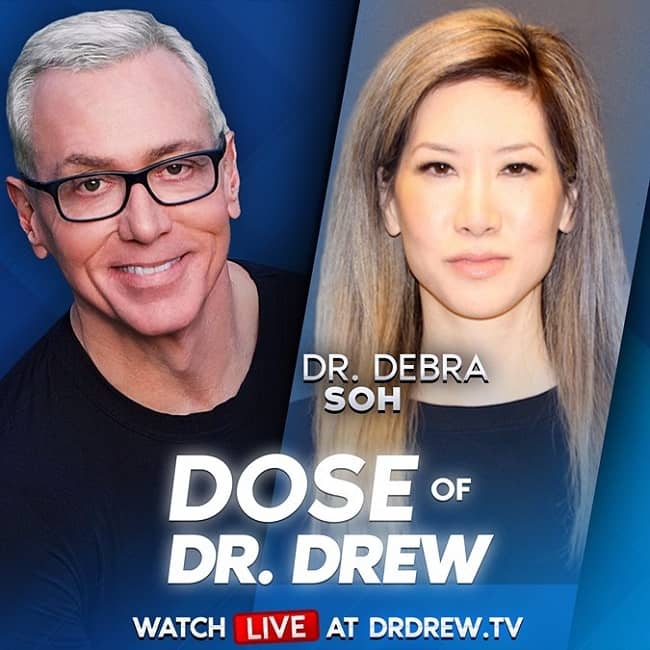 There is no verified information regarding Dr. Debra Soh’s relationship status and affairs. There also are no social media posts regarding this issue and Dr. Soh also has yet to share news regarding this matter herself. She might be living a single life.

Dr. Debra Soh stands tall at an approximate height of 5 feet 4 inches or 163 cm. Likewise, her weight is around 55 kg or 121 lbs and her chest-waist-hip measures are 33-28-35 inches respectively. Dr. Debra Soh has naturally dark brown hair and eyes of the same color. However, she often dyes her hair blonde. 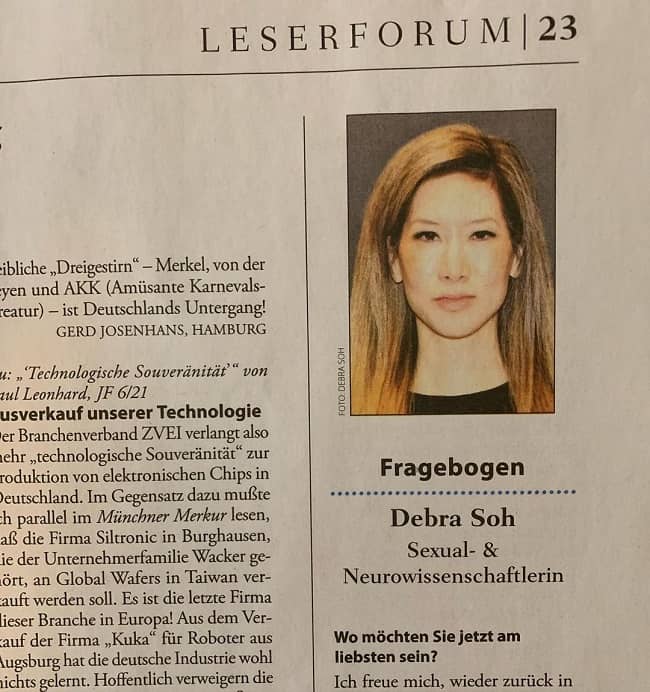 Talking about her social media presence, Dr. Debra Soh joined Twitter in November 2014 and so far has over 154.5K followers on her @DrDebraSoh account. Likewise, her username on Instagram is @DrDebraWSoh. This account boasts 107 post shares and over 35.6k followers while writing this biography in April 2021.

Moreover, Dr. Debra Soh also has over 17.4k people following her journey on Facebook. She also created her official YouTube channel on March 14, 2017. So far, this channel has gained over 156.7k views and 11.9K subscribers. Moving on, Dr. Debra Soh has a net worth of approximately 450,000 Canadian dollars.