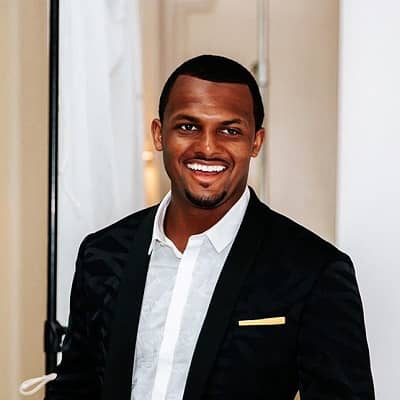 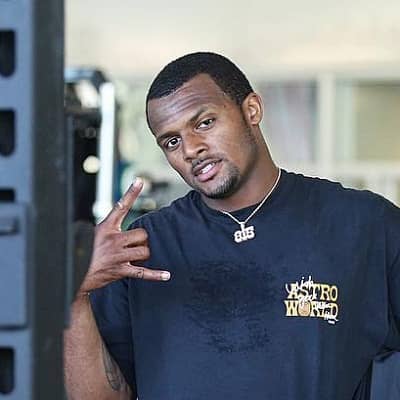 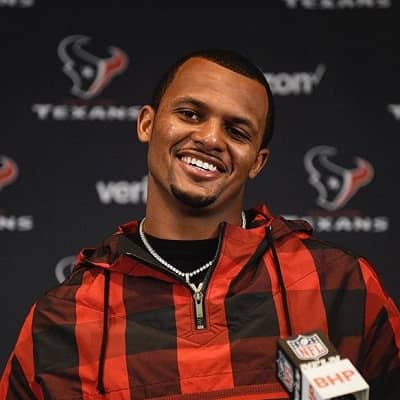 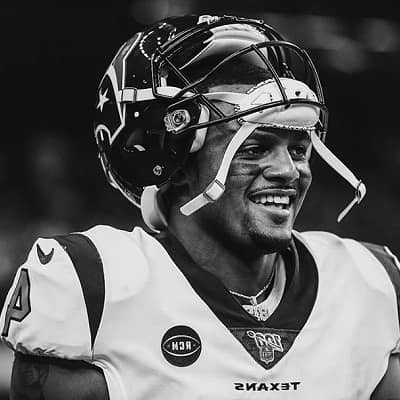 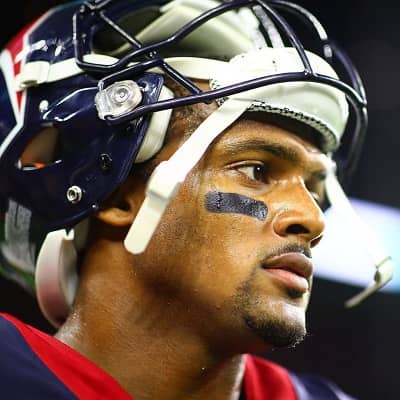 Deshaun Watson is an American footballer and athlete. Deshaun Watson has been playing for the Houston Texans since 2017. Previously, he played for Clements University Tigers and Gainesville High School Football Team.

Deshaun Watson was born on September 14, 1995, and he is currently 25 years old. He hails from Gainesville, Georgia, and his zodiac sign is Virgo. Talking about his family, Deshaun’s parents are Deann Watson and Don Richardson. Deshaun even bought his mom a car for her birthday in 2017. Likewise, Deshaun has four siblings.

Regarding his educational journey, Deshaun attended Gainesville High School in Gainesville, Georgia. He arrived there in the fall of 2010. He then enrolled at Clemson University in January 2014. In December 2016, he graduated with a degree in Communication after three years at Clemson. 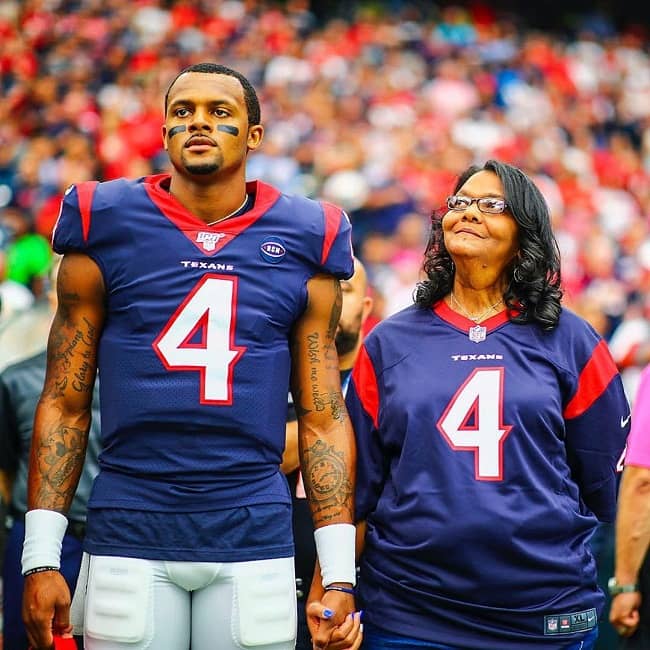 Caption: Deshaun Watson captured with his mother before the game. Source: Instagram

Likewise, Deshaun was selected by the Texans 12th overall in the 2017 NFL Draft. He was also named to his first Pro Bowl in 2018. Previously, Deshaun played for the Red Elephants football team. Moving on, Deshaun Watson has a net worth estimation of $9 million in 2020.

During his high school, Gainesville’s head coach Bruce Miller had planned to start a rising junior to quarterback his spread offense. However, Deshaun Watson won the starting spot. He was also the first freshman quarterback Coach Miller had ever started.

During his career, Deshaun Watson set numerous state records. This includes total yards (17,134), total touchdowns (218), career passing yards (13,077), and career passing touchdowns (155). He then rushed for 4,057 yards and 63 touchdowns. Deshaun Watson excelled in his junior year, winning a state championship. He also earned accolades like Junior All-American, 2014 Player to Watch, and 2014 Top 100 Recruit among others.

During his sophomore and senior years, Deshaun led the Gainesville High School Football Team to the state semi-finals. Moreover, Deshaun Watson received offers from numerous colleges before verbally committing to Clemson University. He did so on 1 February 2012 to play college football. Deshaun was also ranked the number one quarterback recruit for the 2014 class by ESPN 300. 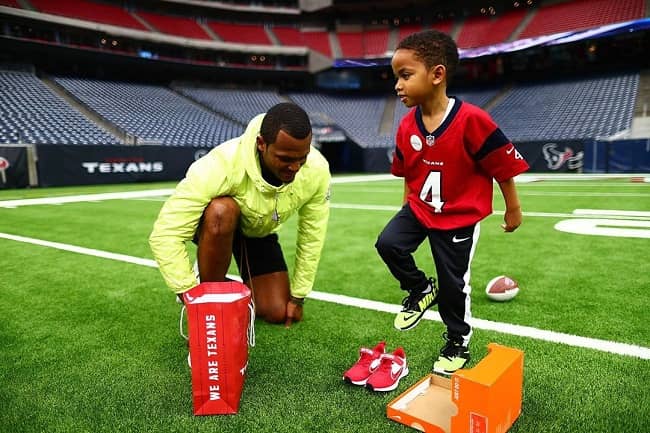 Deshaun is also the quarterback who led the Clemson University Tigers to an NCAA National Championship in the year 2016-17. He also previously led the team to the championship game in the year 2015-16. Likewise, Deshaun was a Heisman Trophy finalist both these seasons. Deshaun was selected 12th overall in the 2017 NFL Draft by the Houston Texans.

Similarly, Deshaun was a USA Today All-American at Gainesville High School in Georgia. He also set Georgia state records for passing yards, passing touchdowns, total yards, and total touchdowns as a high school player. During college, Deshaun played under head coach Dabo Swinney at Clemson. Then he went on to play quarterback with Houston Texans from 2017 and he is still with the Texans at present.

In the fall of 2016, Deshaun Watson won the “Davey O’Brien Award” in back-to-back years. The only person to have this privilege was Jason White in the year 2003–2004. In 2016, Deshaun was also selected as the winner of the “Johnny Unitas Golden Arm Award”. He also became the first repeat winner of the “Manning Award” the same year.

For the second year in a row, Deshaun Watson was named one of five “Heisman Trophy” candidates, along with Michigan’s Jabrill Peppers, Oklahoma’s Baker Mayfield, and Dede Westbrook, and Louisville’s Lamar Jackson. However, Deshaun didn’t bag this award as Louisville’s Lamar Jackson was awarded the Heisman Trophy for his efforts and performances throughout the 2016 season.

On 8 November 2016, together with three other Clemson players, Deshaun Watson declared for the NFL Draft. The other three players were Wayne Gallman, Artavis Scott, and Mike Williams.

Coming out of Clemson, Deshaun Watson was projected as a first-round pick by the majority of scouts and analysts. Sports Illustrated, Pro Football Focus, and ESPN ranked him as the top quarterback available in the draft. Likewise, Deshaun ranked the second-best quarterback by NFLDraftScout.com. 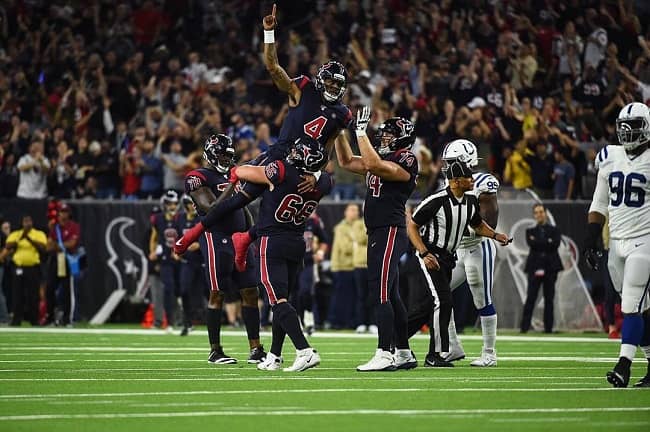 Then on 28 April 2020, the Texans exercised the fifth-year option on Deshaun Watson’s contract. On 5 September 2020, he signed a four-year, $177.5 million contract extension with the Texans with $111 million in guarantees. This kept him under contract through the 2025 season. This was also the second-biggest contract in NFL history after Patrick Mahomes’ contract.

In Week 1 of the season against the Kansas City Chiefs, Deshaun Watson threw for 253 yards, 1 touchdown, and 1 interception as well as rushing for 27 yards and a touchdown during the 34–20 loss. Moreover, Deshaun wears jersey number 4.

Deshaun Watson is romantically involved with Jilly Anais. The lovers began dating each other in July 2019 and have been together since then. To commemorate their one year anniversary, Deshaun shared a series of photos to his Instagram account with the caption, “I’m PROUD OF YOU LUV! Thank you for rockin’ with me through the good & the bad! I adore you and you motivate me. You’re my best friend shorty and we got many more memories & blessings to come! Love you Girl!” 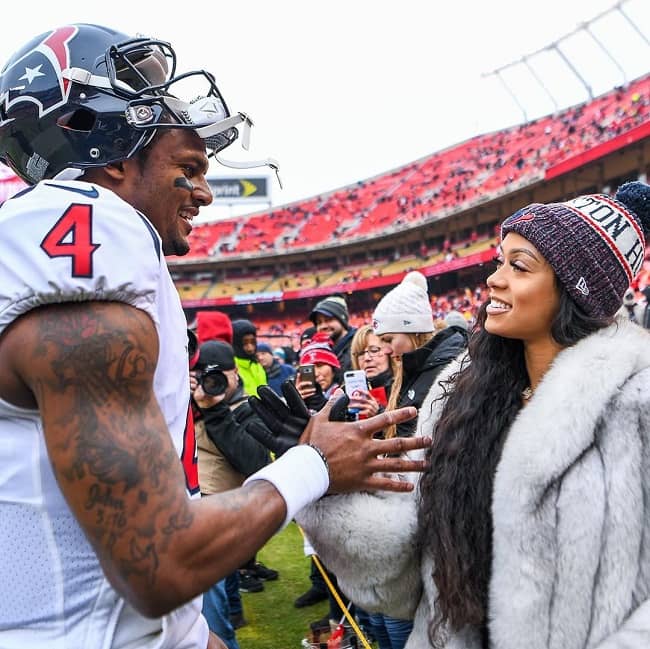 Caption: Deshaun Watson captured with his lover Jilly before his game. Source: Instagram

Deshaun Watson stands tall at a height of 6 feet 2 inches or 1.88 meter and his weight is approximately 215 lbs or 98 kgs. Other than this there is no information about his chest-waist-hip measures, biceps, dress size, shoe size, etc. Likewise, Deshaun has dark brown hair and eyes of the same color. He usually keeps his hair super short and also sports a short beard most of the time.

Talking about his social media presence, Deshaun Watson joined Twitter in May 2011 and so far has over 1.3 million followers on his @deshaunwatson account. Likewise, he goes by @deshaunwatson on Instagram. This account boasts 351 posts shares and over 1.4 million followers at the time of writing this biography. We can contact David Mulugheta for football inquiries and Bryan Burney for marketing inquiries related to Deshaun Watson.