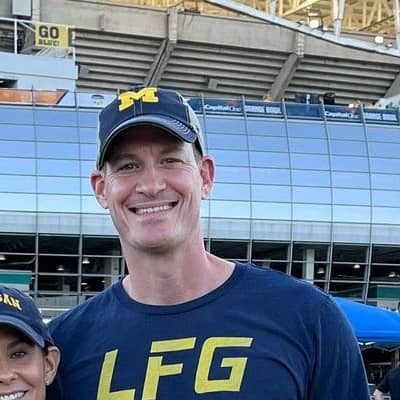 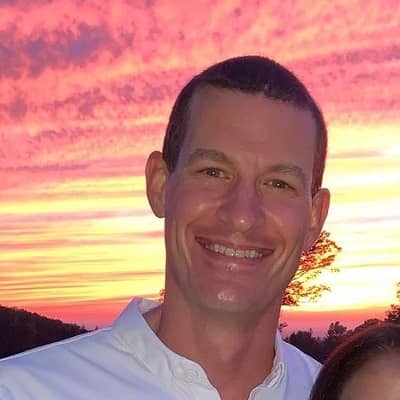 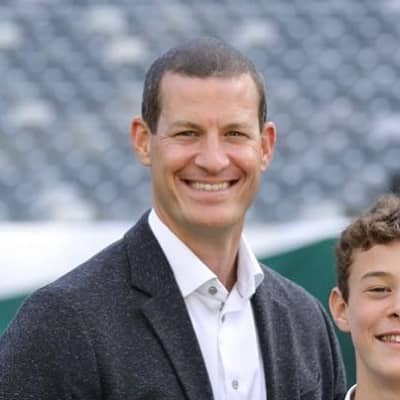 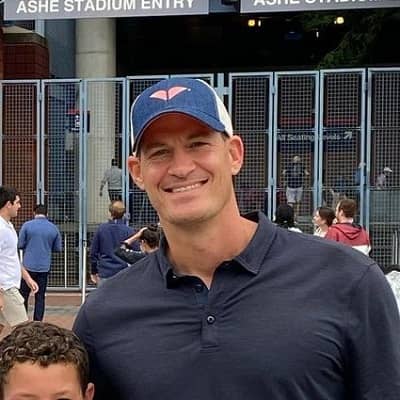 David Reichel is a popular American celebrity husband. David Reichel gained fame for being the loving husband of the American sportscaster Tracy Wolfson.

David Reichel was born on 20 December 1974 and he is currently 47 years old. His birthplace is unknown but at present resides in Tenafly, New Jersey, with his lovely family. Moreover, this personality’s zodiac sign is Sagittarius. Talking about his family, his parents are father Stanley Reichel and mother Elaine Reichel. There is no information related to Reichel’s siblings and other personal details.

Talking about his educational journey, Reichel attended Camarillo High School. Following this, he went on to attend the University of Michigan and graduated from there in 1996 with a degree in economics. Later on, he also graduated from New York University Stern School of Business in 2001 earning his MBA degree in finance and economics.

Professionally, David Reichel is famous for being the celebrity wife of Tracy Wolfson. His wife gained fame as a sportscaster and currently works for CBS Sports. His wife attended Clarkstown High School North and is also a graduate of the University of Michigan from where she earned her degree in communications. Both husband and wife attended the same university in their youth. 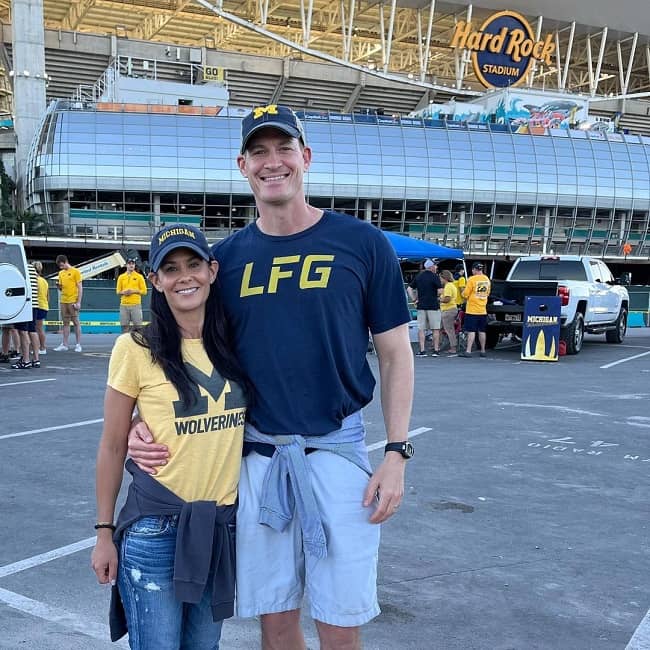 Caption: David Reichel posing for a photo with his wife. Source: Instagram

Besides being the celebrity husband of Tracy, Reichel is also famous for being very athletic. During high school, he played school basketball for four years. Moreover, this personality was also named the league player of the year. Also, he was a valuable addition to his team as he helped them reach the NCAA final four. Prior to his graduation from Camarillo High, this personality also played volleyball for a year.

Following his university graduation, this personality aimed to play basketball overseas and also own his own business. Though he did play basketball overseas, there is no record of him owning a business there. Talking about his own professional career, Reichel was a senior salesperson in the equity derivates group at Barclays Capital in the year 2019. As such, this personality facilitated transactions and managed relationships with some of the world’s largest management firms.

Additionally, this personality was the head options trader at the Bascom Hill Partners. This was prior to working for Barclays Capital. Furthermore, this celebrity husband operated the technology and media sector derivatives trading book at Credit Suisse and Citigroup. Besides all these, this personality is most notable for his pro basketball career playing for the NCAA league. Moving on, this American celebrity husband has a net worth of around $2 million US dollars.

David Reichel is a happily married man. His wife’s name is Tracy Wolfson and she is a popular sportscaster who works for CBS Sports. The happy couple has three sons together namely Evan (@evantreichel), Dylan (@dwreichel), and Ari (@ajreichel24). The couple welcomed their 1st child – Dylan – in 2001, 2nd child – Evan – in 2005, and their 3rd one – Ari – in 2009. 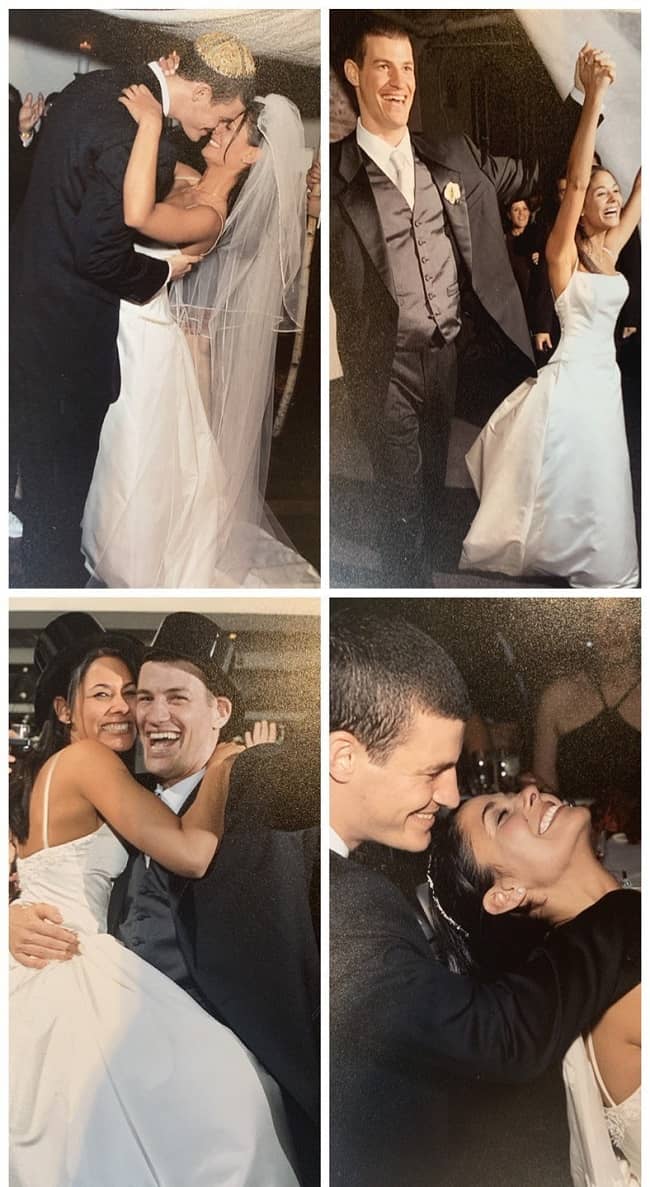 Moreover, the couple tied the knot on 31 December 2002, i.e. on New Year’s Eve. They recently celebrated their 20th anniversary. His wife shared a photo on her personal Instagram account on the 1st of January 2022 thanking the University of Michigan and Michigan Football for bringing the couple together and throwing an anniversary party respectively.

David Reichel stands tall at an approximate height of 6 feet 8 inches or 203 cm. Other than this, there is no information related to this celebrity husband’s other body measurements like his weight, chest-waist-hip measures, biceps, etc. Moving on, Reichel has brown eyes and hair of the same color which he usually keeps short. 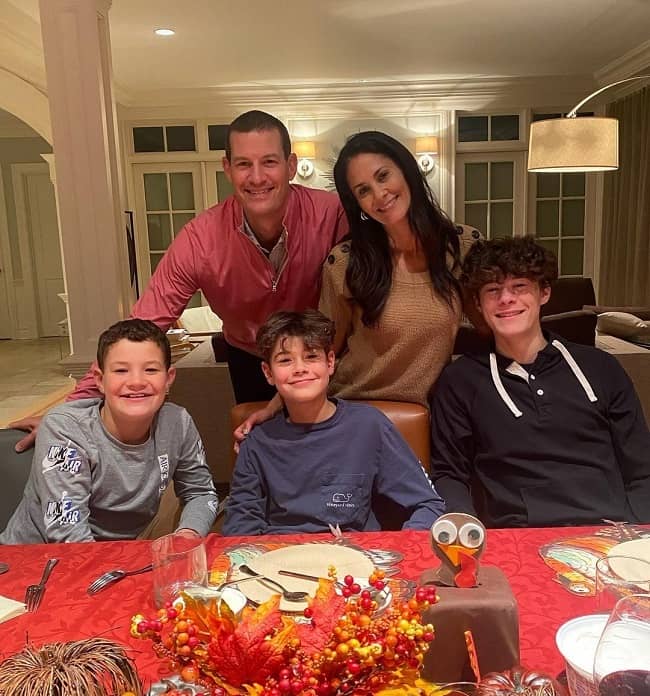 Caption: David Reichel posing for a photo with his family. Source: Instagram