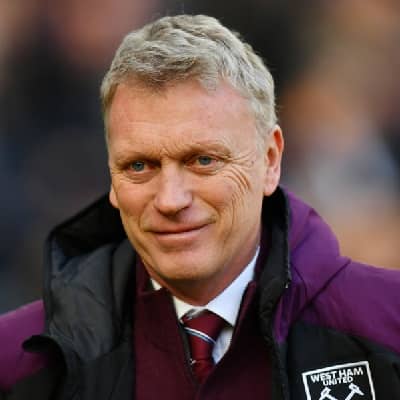 David Moyes is an English professional football coach who is currently the manager of West Ham United in the English Premier League. Following Manuel Pellegrini’s dismissal, David Moyes is in charge of West Ham for the second time.

David William Moyes is a Christian who was born on April 25, 1963, in Glasgow, Scotland. He is 58 years old. Joan Moyes was David’s mother, and she worked in a clothing business. His father, David Sr., was an Anniesland College lecturer. Sr. afterward served as a scout for Everton. Dessie Brown is one of his cousins.

A former player for Celtic, Bristol City, Preston North End, and others, the current West Ham manager is also a former player. During his playing career, Moyes was a centreback who captained Scotland at the Under-18 level.

While at Everton, the Scottish manager was named LMA Manager of the Year in 2002/03. He helped Everton qualify for the Champions League in the 2004/05 season. In Manchester United, he succeeded Sir Alex Ferguson. Ferguson himself chose him as a substitute, earning him the nickname “The Chosen One” among Red Devils fans.

The current Hammers manager began his career as a free agent with Celtic U20, joining them from Drumchapel in 1980. In 1982, Celtic elevated him to the senior team. He joined Cambridge United on a free transfer in 1983.

Though he did not have a stellar playing career or a high-paying salary as a player, he had his most successful career as a manager, earning more than €50 million. He is now the manager of West Ham United, making a good salary and living a nice lifestyle with his family.

His contract with Preston, Everton, and Manchester United

Moyes began his professional management career with Preston in 2001, earning a five-year contract for $3.5 million. Bonuses and incentives were provided. From 2002 until 2008, he earned up to £30,000 a week at Everton. Everton extended his contract and increased his salary to £4 million per year after he had many successful periods with the club.

Between 2002 and 2013, the former Everton manager earned $35 million from his contract with the club. Later, the 1981/82 Scottish Premier Division champion center back signed a £30 million six-year contract with Manchester United. However, he was fired just after a year that would have paid him £5.2 million in compensation. During his tenure at Man United, he earned almost $16 million in bonuses and incentives.

Pep Guardiola of Man City is the highest-paid EPL manager, followed by Jurgen Klopp of Liverpool. Each season, they make almost £30 million and £15 million, respectively.

Moyes was a rising center-back in Scotland, winning the Scottish Premier League with Celtic in 1981/82. In 1985/86, he also won the Associate Members Cup with Bristol. He also guided Preston North End to the Football League Third Division title in 1995/96.

He has also won the Premier League Manager of the Month award ten times, most recently in March 2013.

The West Ham manager has a long history in football, both as a player and as a manager. He has amassed a great deal of wealth through managing elite clubs such as Everton and Manchester United.

David Moyes’ net worth is believed to be over $24 million, according to sources. He just extended his contract with West Ham for another three years, till 2024. The contract’s value, however, has yet to be published on their official website.

According to some reports, West Ham’s manager was forced to take a 30% wage reduction as a result of the epidemic.

David Moyes and Pamela Moyes are currently married. David and his wife Pamela have been married for almost 30 years. During his tenure at Celtic, the two met for the first time.

Pamela, David’s wife, has been a staunch supporter of her husband for more than three decades, through highs and lows. Mr. Moyes claims that his wife not only supports him in his personal life but also in making choices. He currently resides in Preston, England, with his wife.

Lauren Moyes, the couple’s daughter, and David Jr., the couple’s son, are the delighted parents of two children. As scouting revamp, David Jr is also associated with Westham.

David just recruited his son in Westham, who formerly worked as a talent manager for Wasserman. He began working there as an intern in 2011.

There was a report that Zaha had slept with the daughter of his manager. The purported player and Moyes’ daughter Lauren, on the other hand, never truly agreed to the rumors.

In fact, Zaha was so badly damaged that the young, promising attacker was unable to demonstrate his abilities. On Twitter, he denied all of the allegations.

People began to speculate that the issue was the primary cause for his lack of playing time at Old Trafford as a result of the rumor. In response, the winger for Crystal Palace posted on Twitter:

“I’ve never dated or even met David moye’s [sic] Daughter so that isn’t the reason for my absence in games,”.