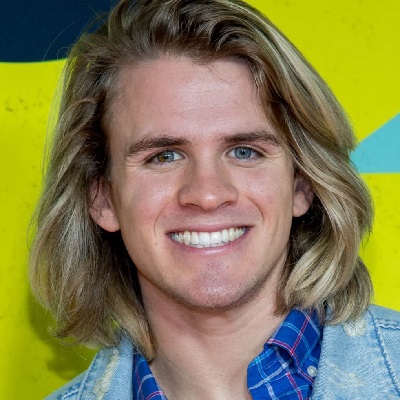 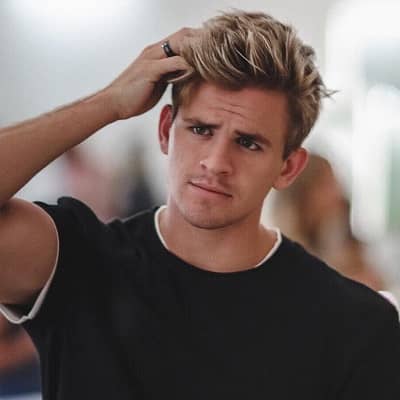 Cole LaBrant is a famous social star as well as YouTuber, who rose to fame from his collaborative Family YouTube channel The LaBrant Fam. Cole LaBrant alongside his wife Savannah posts fun family videos such as family announcements and pranks featuring their kids which has earned over 12.5 million subscribers.

Cole LaBrant is 24 years old. He was born on August 21, 1996, Alabama, United States. His mother’s name is Sheri and his father’s name is Ken LaBrant who met each other at the age of seventeen. He grew up alongside his five siblings in Troy, Alabama. Likewise, he has four brothers named Luke, Jack, Clay, and Tate. And also a sister named Lily LaBrant.

Likewise, he and his family are very close to each other and they are often featured on his social media pages. He and his mom participated in The Amazing Race in 2016, and they nearly missed out on $1 million by coming second. Moreover, he holds an American nationality. 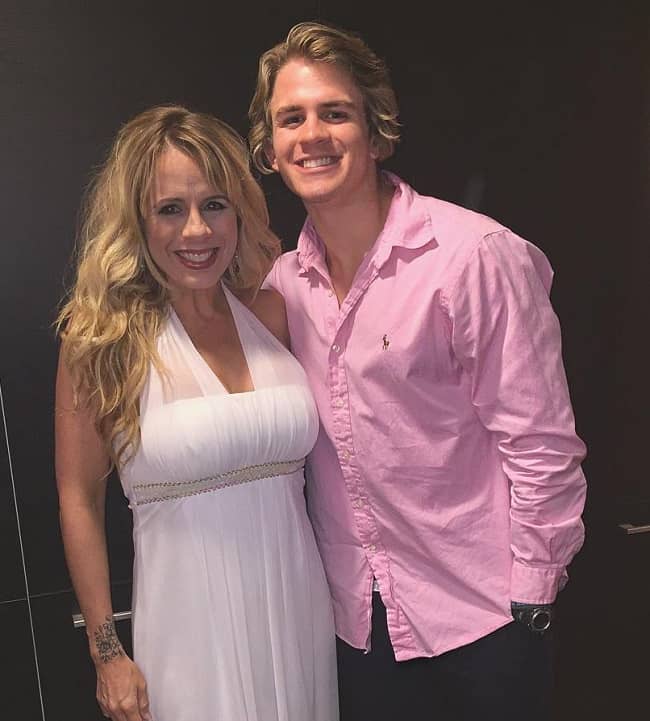 Caption: Cole LaBrant posing for a photo with his mother (Source: Instagram)

Professionally, Cole LaBrant is a famous American social media personality. He started his social media career during his teens with big dreams. As of now, he is a family man, and he is living out his dream with his wife and kids. Moreover, he is a popular Vine content creator. He worked on several themes and explores these through his videos. He features his snapshot of the daily life and concerns of his immediate social circle, family, and friends. It provides the viewers a glimpse into his personality and the world he lives in.

Likewise, he has worked collaboratively from the very beginning of his career as a Vine content creator. Likewise, he initiated a social media career in 2013 after entering a vine competition with a couple of his friends. He collaborated with Vine channel Dem White Boyz which remained very popular previously until Vine shut down. Moreover, he frequently took part in contests aired on social media, oftentimes with partners like John Stephen Grice, and Baylor Barnes. He has even competed in the reality show ‘The Amazing Race 28’ together with his mother.

Sometimes, he also collaborates with his brother Clay LaBrant in his videos. Besides all, he is also interested in modeling and signed a contract with Water Bluff clothing in 2013 together with his collaborators Baylor Barnes and John Grice from Dem White Boyz.

Further, the trio even participated in the contest, and the video they made used to garnered 100,000 followers in one week. This tremendous success came as a wonder for him and his friends, Baylor Barnes and John Stephen Grice. The friends chose to cash in on this new chance, and they created the page Dem White Boyz.

As they gained huge success, they also got the opportunity to attend major events. Sadly, in 2015, the fame became too much to handle for his other partners John and Baylor, and they left the channel to him. Though, he lost followers after rebranding the channel and changing its contents. 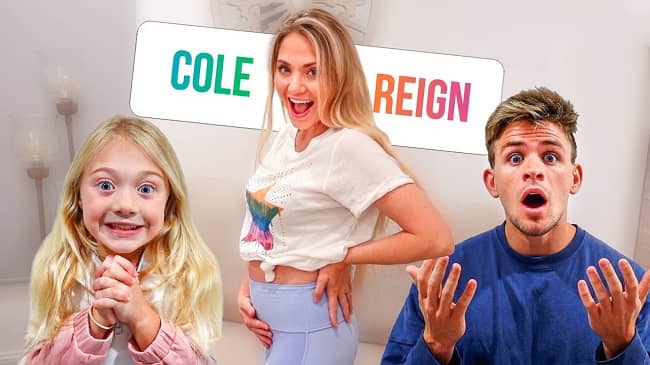 Currently, he is actively present on his family YouTube channel The LaBrant Fam, with his wife, Savannah. The channel center on his family. Today, they have successfully garnered more than 12.5 million subscribers, which was created on August 24, 2012.

Initially, he and his partner named the YouTube Cole&Sav. Later, they renamed the channel The LaBrant Fam. It features fun family videos such as family announcements and pranks featuring their kids Everleigh, Posie Rayne, and Zealand to the channel.

The oldest video on the channel date backs to January 25, 2015, with a video titled ‘Selena Gomez, will you go to prom with me? – Cole LaBrant.’ The first video has garnered more than 5 million views so far. The video featured him asking famous pop singer Selena Gomez to his senior prom through a video.

Some of the oldest videos that have over 7 million views include ”SURPRISED MY GIRLFRIEND IN CALIFORNIA (CUTEST REACTION EVER!!) | COLE AND SAVANNAH’, FIRST TIME AT DISNEYLAND!!! VLOG WITH SAVANNAH AND EVELEIGH (:.

The channel showcases challenges, prank, slime, surprise video amongst their family member. More specifically, the channel has featured all their special moment since their relationship to their engagement day, wedding days, and even being parents and more.

Two of the most viewed video on the channel include “4 YEAR OLD GIRL AND DADDY DO CUTEST CARPOOL KARAOKE EVER!!!,” and “GETTING STUCK ON A WATERPARK RIDE!!!.” The first video feature him and Everleigh having carpool karaoke session and has garnered more than 56M views. Similarly, the second video featured them on fun parks which have garnered 48 million views.

Moreover, he is also active on different social media platforms where he has garnered huge fan followers. He is even extremely popular on TikTok with over 16.5 million fans, with almost 315 million total likes on his @thesupercole account.

Besides that, he is a very motivational communicator on social media. He even has a range of interests including photography. He insists to love Jesus but hates religion.

Cole LaBrant is a famous YouTuber with the family YouTube channel The LaBrant Fam which has estimated net worth of around $12 million. He along with his wife Savannah shares the fortune together and is living a living life with a good income from their social media handles.

Reflecting on his relationship status, Cole LaBrant is a married man. He started dating Savannah since 2016. Initially, he messaged Savannah on TikTok formerly named Musical.ly to ask for a favor. At that time he wasn’t romantically interested in her, and they didn’t communicate much after that initial message. But, as destiny would have it, they crashed into each other in Los Angeles, and they began dating in 2016.

In January 2017, he proposed Savannah. She said and eventually after six months later, the duo got married. Savannah has a daughter named Everleigh from her previous relationship. 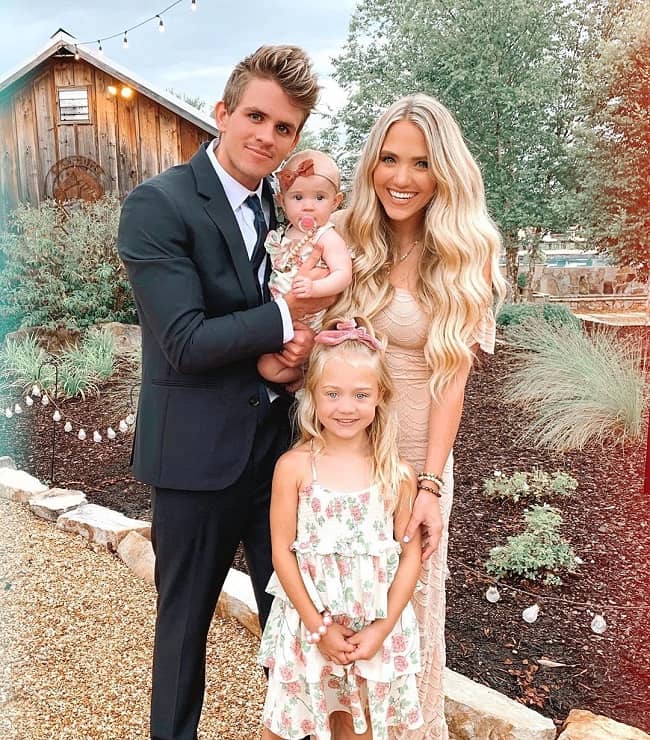 Caption: Cole LaBrant posing for a photo with her mother and his kids (Source: Instagram)

He loves Everleigh like his own daughter. But he still believes it is essential for her to have a good relationship with Tommy. Together, the duo welcomed a daughter named Posie Rayne in December 2018, and a son named Zealand in July 2020.

He authored the book Our Surprising Love Story alongside Savannah in 2018. The duo revealed the intimate details about their lives. In the book, they talk about their pitfalls and their triumphs. The book comprises in-depth revelations about family, relationships, and religion.

Being involved in the social media world full of entertainment, rumors, controversies,  Cole LaBrant has been involved in his fair share of web controversies. He has managed to weather most of them, but problems remain about his daughter’s social media presence. The criticism began when he used Everleigh as clickbait while sharing a video of his wedding.

Later, when he posted an April Fools video of a prank that made Everleigh cry. In the following video, he along his wife Savannah told Everleigh that they were giving away their puppy. The video prompted outrage among fans, and some of them unfollow from the channel.

It made YouTube disabled comments on the family’s channel to defend Everleigh from online predators. Later, he again courted controversy when he shared a video stating that his house was under threat from the California wildfires of 2018. The duo even stated that they had to leave their house because of the fires. However, later it turned out to be fake after neighbors reported that no departures were ordered in the area.