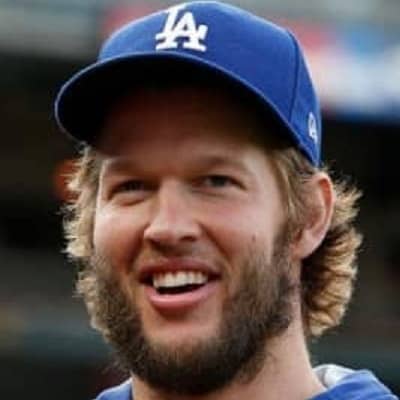 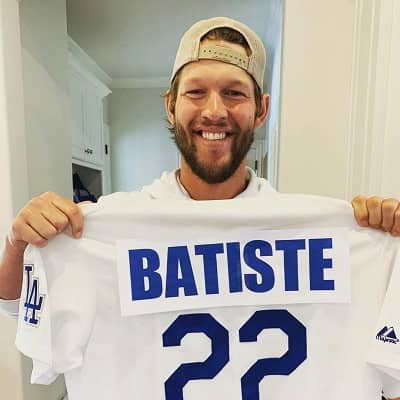 Clayton Kershaw was born on 19th March 1988 and is currently 33 years old. His birth name is Clayton Edward Kershaw and his zodiac sign is Pisces. Likewise, Clayton was born in Dallas, United States of America, and holds American citizenship. Similarly, talking about his ethnicity and religion, he belongs to a Caucasian ethnic group and follows Christianity. Furthermore, about his personal life, Clayton was born to Christopher George Kershaw and Marianne Kershaw. His father Christopher is a musician who has won the ‘Clio Award’. Likewise, talking about his childhood, Clayton spent his childhood with his mother as his parents separated at the age of 10.

Ever since childhood, Clayton has been an athlete since a young age. Similarly, during his high school years, he became popular as one of the best baseball prospects in the country. Moreover, in the year 2006, he achieved the ‘Gatorade National Player of the Year’ honoring his baseball skills. Furthermore, talking about his educational background, Kershaw went to Highland Park High School and also became part of the school baseball team and the youth sports league.

Clayton Kershaw started his athletic journey from the year 2006 after entering ‘MLB Draft’ and was chosen by the LA Dodgers as the seventh overall pick. Moreover, at that time he was thinking of accepting the ‘Texas A&M University’ scholarship but chose Dodgers instead. Likewise, he began the professional game with the ‘Gulf Coast League’ the rookie-level minor-league affiliate of the LA Dodgers. Followed by this in the year 2007, he shifted to ‘Great Lakers Loons’ a Class-A affiliate of the ‘LA Dodgers’.

Likewise, in August 2007, Clayton got a promotion to play to ‘Southern League’ in which he played for ‘Jacksonville Suns’ which is a double-A team. In this, his record for the team was (1-2, with 3.65 ERA) which made him one of the best prospects among the Dodgers. Likewise, he made his MLB debut on 25th May 2008 with the Dodgers against the ‘St. Louis Cardinals’. Followed b this, for one year he became the youngest player in MLB. 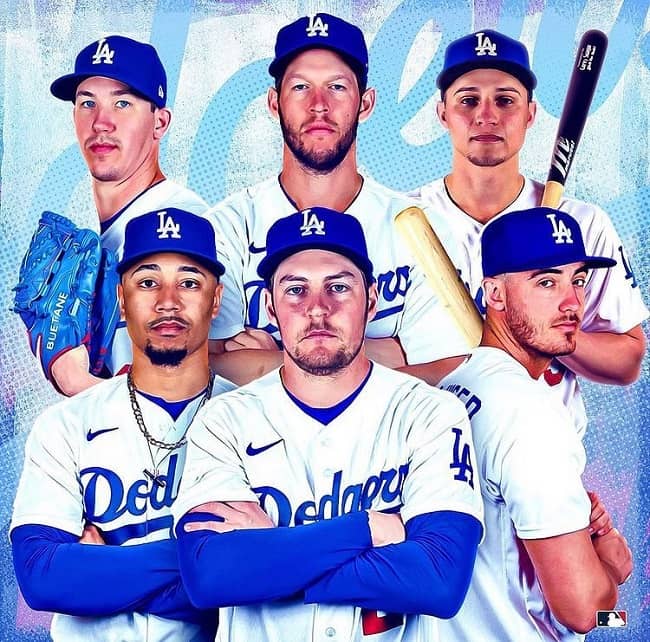 Caption: Picture of Clayton with his team. Source: Instagram

Followed by this, for the 2009 regular season, Clayton made a record of 2.79 ERA with 185 strikeouts. Likewise, he made his post-season playoff debut in the year 2009 with National League Divison Series against the ‘St. Louis Cardinals’. During this season, he was experiencing some set-backs during the 2010 season. However, while completing the season the result was a win-loss ratio of 13-10 and a 2.91 ERA. Moreover, he finished the season on a high note, with a complete game shoutout against San Francisco by being chosen as the ‘Opening Day Starter’ for the 2011 season. Likewise, in this season, he made a record of high points in his career.

Moreover, Clayton became selected for the 2012 MLB All-Star Game for the second year in a row. Likewise, he became the runner-up for the ‘CY Young Award’. Likewise, he led the league in ERA (2.53). Followed by this, he won the ‘CY Young Award’ for three and four seasons. Similarly, he also won the league’s MVP Award and became the first pitcher (since BOB Gibson in 1968) to win. However, for the second half of 2014 and the first half of 2015, it did not turn out profitable for him like earlier seasons. Moreover, Clayton became part of the 2015 ‘All-Star Game’ initially but took participation in the end as a replacement.

Furthermore, in the next year, he became the first ‘Dodger’ of the 2016 season and won 6 straight ‘Opening Day’ games. Moreover, this became his career-best ERA of 1.69. However, suffering from back pain during this season, he could not play the 2016 ‘All-Star Game’ due to his pain. Likewise, in the 2017 season, he saw his seventh straight ‘Opening Day’ start but he still could not play due to his back issue.

Followed by this, in the 2018 season, Clayton became the ‘Opening Day’ starter making his record for the eighth opening. However, due to pain in bicep tendinitis and back pain, he could not play this season as well. Moreover, his team won an entry to the ‘World Series’ but it became a failure to Clayton in his two starts.

Regarding his relationship status, Clayton is straight and in a marital relationship with her loving wife Ellen Melson. After dating for more than seven years since high school they tied the knot on 4th December 2010. Likewise, they both have two children together, one son and one daughter. Their names are Cali Ann born in January 2015 and Charley Clayton born in November 2016. 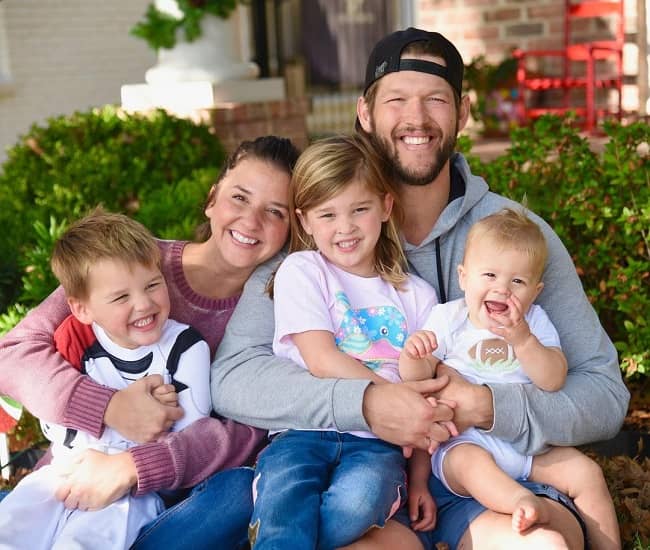 Caption: Clayton with his wife and children. Source: Instagram

This young athlete stands 6 feet 4 inches (76 inches) tall and weighs around 103 kg (228 lbs). Likewise, he has a fit body type with a body measurement of around 42-32-15 in chest-waist-biceps. Similarly, looking at his facial appearance, he has fair skin with blue pair of eyes and dark brown hair color.