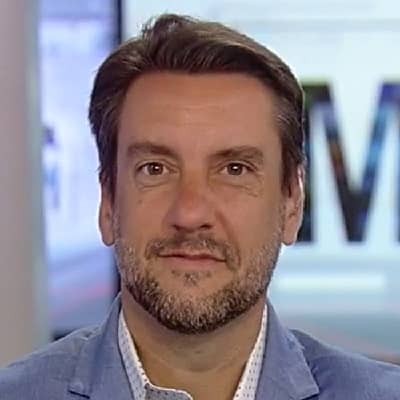 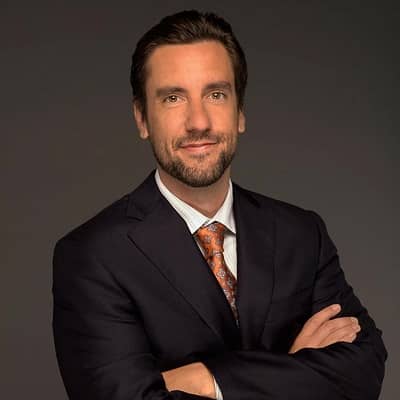 Clay Travis is a sports journalist, political commentator, radio host, Media personality, and also TV analyst. Clay Travis has been working in “The Clay Travis and Buck Sexton Show” together with Buck Sexton.

Clay Travis’s birthdate is 6th April 1979 and his birthplace is Nashville, Tennessee, the United States. His age is forty-two years old whereas his zodiac sign is Aries. Similarly, the TV personality holds an American nationality and follows the Christian religion as well. However, there is no information about the journalist’s parents and childhood.

As for his education, he went to Martin Luther King Magnet at Pearl High School which is in Nashville. From there, he graduated in the year 1997. After then, he joined George Washington University, Washington, D.C. The journalist even went to Vanderbilt University Law School, Nashville for his further studies. 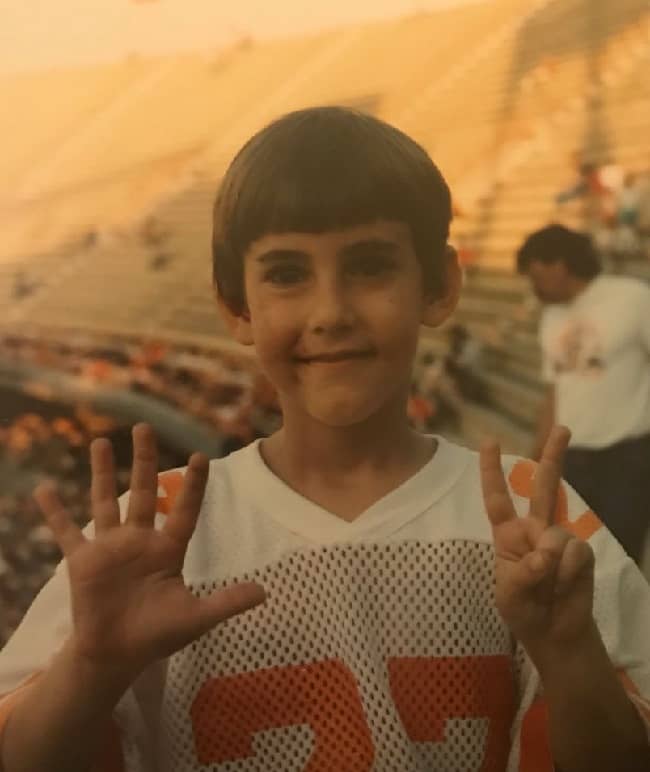 Caption: Clay Travis when he was young (Source: Twitter)

Clay Travis first was serving in the position of a lawyer for the U.S. Virgin Islands and Tennessee too. It was at the ending of 2004 when he started gaining media attention from the personal blog he wrote when he was residing in the U.S. Virgin Islands. One of the Tennessee Titans admirers, Travis was incapable to acquire NFL Sunday Ticket, the satellite television package to watch NFL matches in the islands. So, he went on a “pudding strike”, consuming just pudding regularly for fifty days, with the objective of compelling DirecTV to transfer the package to the Virgin Islands.

The struggle however was unsuccessful, but he blogged talking about the experience and eventually was gaining the media’s attention. In September 2005, he started online writing for CBS Sports for which he wasn’t earning for the 1st year. Then, the journalist dropped off his law preparation for good in 2006. When he was writing for CBS, he started serving for the book, “Dixieland Delight”, he went to the football stadiums of the twelve Southeastern Conference’s members. Then, he went on to be Deadspin’s writer and editor, and also became FanHouse’s national columnist.

In the year 2011, while FanHouse was combining into Sporting News, the TV host brought out Outkickthecoverage.com. After some time, it went on to be one of the most visited college football websites. He also was serving at D1 Sports Training together with NFL forecasts making for the NFL Draft in 2008. Then, the TV personality wrote a serial of 10 parts, “Rough Draft” about the experience. In the year 2010, Travis got the title of “Best Sports Radio Host We Love To Hate” in the journal’s “Best of Nashville” matter by The Nashville Scene. Then, he worked as a co-host of a sports radio talk show, “3HL”.

He also once was the host of NBC Sports’ national sports radio show. The radio host then resigned from 3HLand in 2014 and was recruited by Fox Sports for its college football Saturday pre-match show. In the year 2015, Clay contracted with Fox Sports to authorize his whole sports media brand, counting Outkick the Coverage. Likewise, he began a national weekly TV show, began an everyday Outkick the Show broadcast on Facebook and Periscope. He then started a national radio show in 2016 together with Fox Sports Radio.

In 2010, he was termed out by DeMarcus Cousins for his predicted opinion that Cousins would be arrested within the following 5 years. As an answer, the TV host got an offer to give a charity of Cousins’ selecting. In addition, he started a regular sports radio show, “3HL”, in 2010 on Nashville’s 104.5 the Zone. Then, he brought out the “Outkick the Coverage” radio show in 2016 for Fox Sports Radio countrywide sunrises from 6-9 am et. In May 2012, Clay stopped working thereafter it was declared that “Travis and Buck Sexton would be taking over Rush Limbaugh’s time slot on Premiere Networks”. The same show started on 21 June 2021. 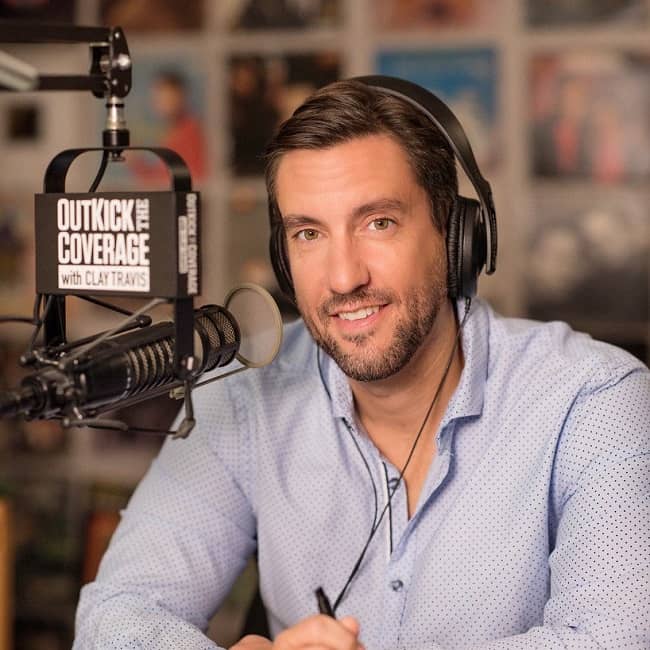 Caption: Clay Travis while hosting a show (Source: Crossing Board)

The American radio host has been making an impressive amount of money from her professional career. He has a salary of between $20 thousand to $100 thousand which he gets annually. Likewise, he has a net worth of approximately $6 million as of October 2021. His primary source of income is from being a radio host, TV personality, sports journalist, and commentator. Currently, Travis has a luxurious and happy lifestyle together with his small family in the US.

Clay Travis is presently in a marital relationship with a woman named Lara. His wife is a past Tennessee Titans cheerleader. Together the happy American pair is the parents of their 3 sons. Other than this, there is no further information about the radio host’s other relationships. However, the journalist has been involved in some of the controversies. He criticized his alma mater, Vanderbilt University in August 2016, for organizing to eliminate the word “Confederate” from its notable Confederate Memorial Hall.

It happened while matching the transfer to movements reserved by “Middle Eastern terrorists.” Subsequently, he missed a promotion contract worth $3,000 he made with Jack Daniel’s. On 15th September 2017, he was present on CNN as a guest, together with Brooke Baldwin, to discuss free speech. They precisely discussed if Jemele Hill should be dismissed for calling Donald Trump a “white supremacist” and declaring that police generals are “modern-day slave catchers” on her private Twitter page. 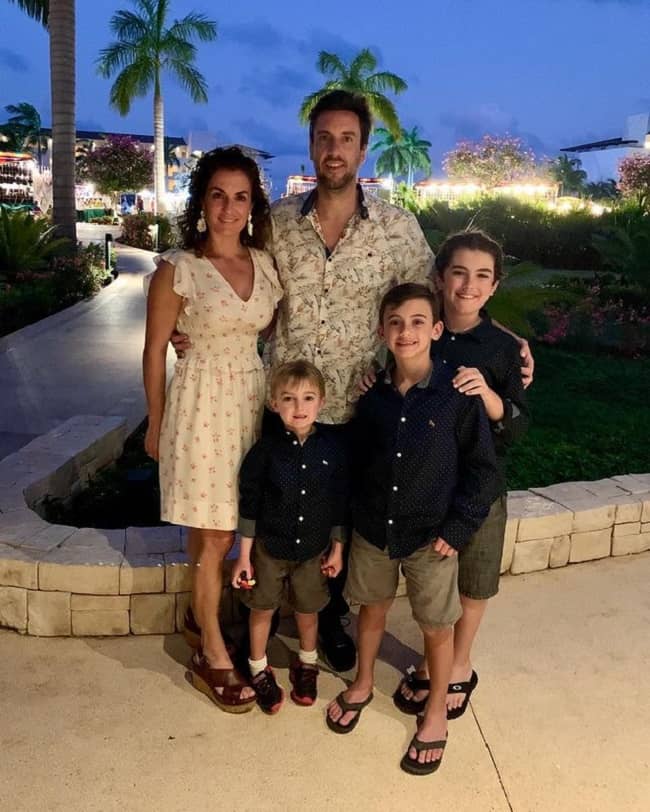 Regarding his body measurement, the radio host has a good height of 183 cm or 6 feet 0 inches. Travis has short black hair and a pair of brown eyes with a fair complexion. Similarly, the American TV personality weighs around 75 kg or 165.35 lbs. He has a well-maintained and slim body type with an attractive personality. Moreover, the journalist seems to be a fitness freak as he looks healthy and has a good physique. In fact, Clay has also been active in sports and physical activities.