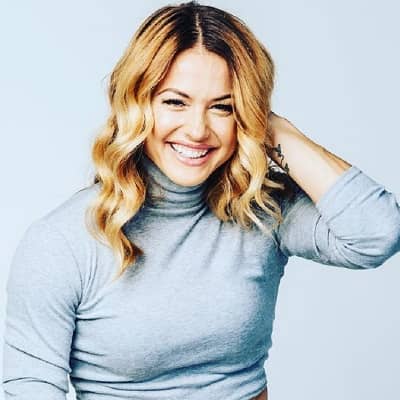 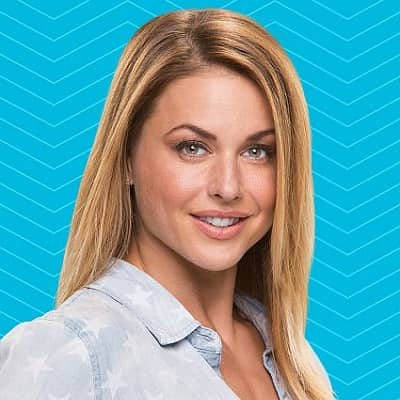 Christmas Abbott also known as Badass Body Life is an American professional CrossFit athlete, author of her own dieting book, Olympic weightlifter, and a fitness model. Christmas Abbott is the first woman to be on a NASCAR pit crew.

Christmas Abbott whose full name is Christmas Joye Abbott was born on December 20, 1981, in Lynchburg, Virginia, USA, and is currently 39 years old.

She is currently living in Raleigh, North Carolina. She was born five days before Christmas so her mother named her Christmas Joye.

Likewise, She has a son, Loyal Atticus Abbott, born on October 18, 2018, at 11:28 pm in South Carolina with her boyfriend Benjamin Bunn. Her zodiac sign is Sagittarius.

Her father is Ed Abbott who was an avid biker and gave her her love for tattoos. In 2014, her mother, Barbara Abbott had Breast Cancer.

Throughout her chemo, Barbara remained an inspiration, not just to her daughters, but to other women as well. She had a horrific car accident at the age of 13.

Her sister, Kole Abbott was grievously injured and went into a coma. The incident affected her mind and she began smoking and drinking a lot. Her behavior lasted for 10 years, until her 22nd birthday.

She followed her mother (an American Army Vet) to Iraq as a 22-year-old civilian contractor. Similarly, she discovered the sport of CrossFit while living there for four years.

She joined her mom as an Iraqi contractor at 22. Soon, she started to learn more about healthy living then she quit drinking and smoking and she turned to exercise and healthy eating instead.

She is a high school graduate. She hasn’t shared further educational qualifications.

Christmas Abbott stands at a height is 5 feet 3inches (1.6 m) and she weighs about 60 kg. Her beautiful green eyes and blonde hair add up to her beauty. Her body measurement is 34B-25-36. 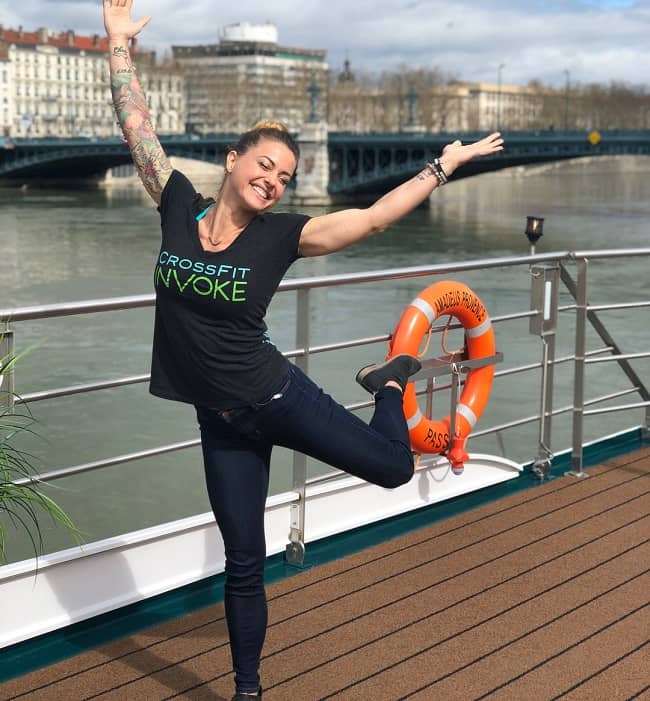 Her success in CrossFit led her to take up competitive Olympic Weightlifting. Eventually, in December of 2013, she became nationally ranked as an Olympic lifter at the American Open.

On top of becoming a Crossfit gym owner and athlete, she also became the first female pit crew member for NASCAR.

She is also a 2-time regional qualifier for the CrossFit Games back in 2012 and 2013 as a part of the team competition with CrossFit Invoke.

Christmas tried to join the Army when at the age of 18 after graduation. They rejected her and she also accepted that she was in really bad shape.

At the age of 22, she joined the US base in Iraq as an independent civilian laundry attendant then she realized the value of human life and how she was wasting away her life.

Finally, she quit smoking and started following a strict and disciplined fitness routine. She came across the CrossFit regime when a fellow soldier showed her a video of women taking on intensive challenges.

She instantly started achieving one milestone after the other until she destroyed every milestone in the renowned CrossFit Challenge.

Then, she returned to the US after four years in Iraq and started her own CrossFit coaching class in Raleigh. Also, she has a gun tattooed on her hip “to remind her of the time she spent in Iraq.”

In 2010, she opened her own gym, named –” CrossFit Evoke.” And focused on developing her own brand. In 2013, she also became the first woman to be a participating member of a NASCAR pit crew.

She opened a Christmas Abbott CrossFit-centric workshop in 2014. In 2017, she joined Big Brother 19 and won third place.

She broke her foot in the second episode of the season with 10 broken bones, four dislocated bones, and a ligament that was to be reconstructed.

Later, she had to get a donor bone in one place, and surgeons told her that she would not regain full mobility, effectively ending her competitive CrossFit career.

She has been on the cover of Sports Illustrated and Harper Collins with her ripped and sexy physique.

In fact, her physique got so much attention that she decided it was time to write down all of her fitness tips and that is when she wrote her book “The Badass Body Diet”. 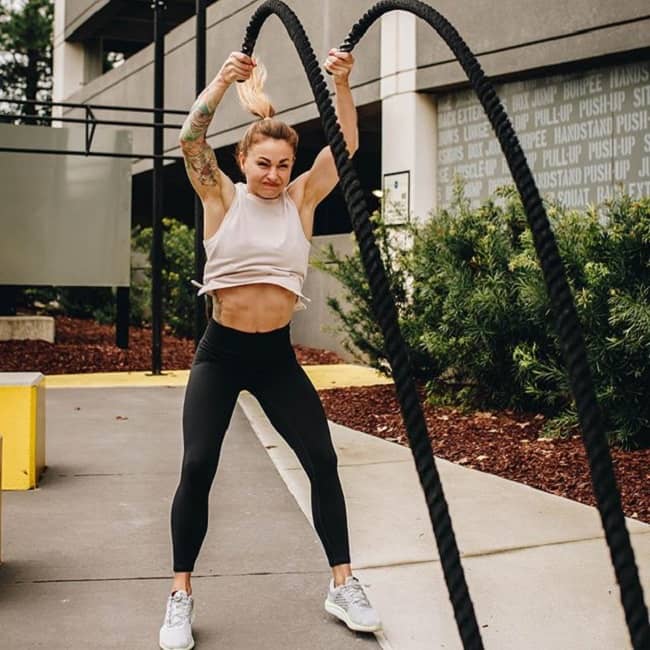 In May 2015, Abbott released her first book, called – The Badass Body Diet: The Breakthrough Diet and Workout for a Tight Booty, Sexy Abs, and Lean Legs.

The book sold so well and made her a National Best Selling Author so she decided to write another book. On May 23, 2017, she published her second book, named – The Badass Life.

This book is actually her month-long program to help you achieve a heightened sense of self-worth as well as a higher quality of life.

She was with NASCAR for a while changing tires for various kinds of races. Later, she decided that the time requirements and the wear and tear of the job were too much.

She was 30 years old, the age at which most people start having health issues. Even though she loved it she had to move on.

She has also played in other TV shows and movies like Overtown, The Operator: Warfare, and Tattoo Titans. Considering this is a completely male profession it is quite an accomplishment.

Moreover, she is also the Oxygen Magazine Trainer Challenge Head Trainer and an online fitness coach.

Christmas earned most of her wealth from being a member of a NASCAR pit crew, her gym, selling supplements on her website (bournrelentless.com), selling her books (especially on Amazon), and sponsored posts on her Instagram account.

Therefore, she has an estimated net worth of $0.7 million.

In 2014, she was engaged to a photographer, Josh Holmes. They later split up. On October 10, 2015, Abbott got engaged to Geoff Kercher.

The couple had a planned wedding on September 3, 2017. The two also broke up. In October 2017, she started to date Benjamin Bunn, a former Paratrooper, and owner of a CrossFit gym.

Bunn and Abbott first met during a charity event in 2016. She announced on 15th March 2018 that she and her boyfriend, Bunn were expecting their first baby together.

In October 2018 they welcomed their son. Bunn is also the father of Christmas’s son. 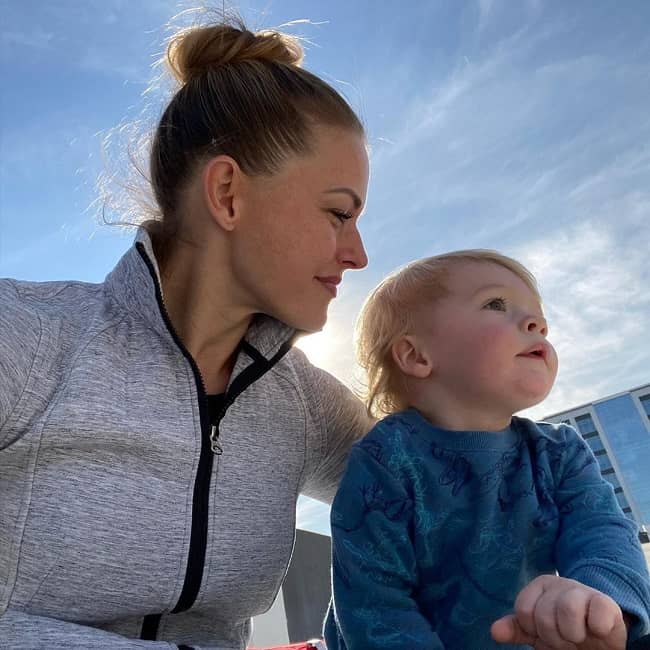 The couple broke up after Bunn cheated on her. Felony criminal mischief charged her in November 2018.

Police arrested her on November 7, 2018, while she was eight months pregnant for repeatedly ramming into Bunn’s new girlfriend’s car, a Mercedes SUV at Cigar City CrossFit gym in Tampa, Florida owned by Samantha Jane Morse.

They charged her with criminal mischief of more than $1,000 as a third-degree felony and spared her a jail term.

Police arrested her for the same reason in August 2018, as she attacked the woman Benjamin was having an affair with.