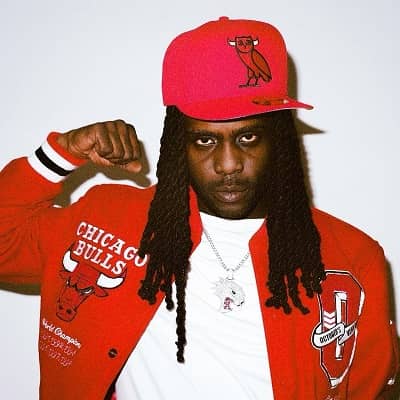 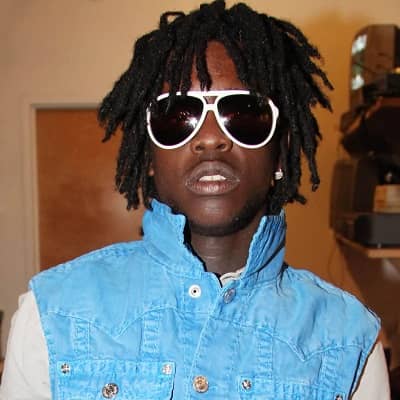 Chief Keef is a rapper, singer, songwriter, and record producer from the United States. Moreover, Chief Keef is best known for his singles, ‘I Don’t Like,’ and ‘Love Sosa.’

Keith Farrelle Cozart best known by his stage name Chief Keef was born on the 15th of August, 1995, in Chicago, Illinois, the United States of America. According to his birth date, this rapper is 27 years old and holds American nationality.

Moreover, he has the zodiac sign Leo and he belongs to the African-American ethnicity. He is the son of Alfonso Cozart (father) and Lolita Carter (mother). When he was born, his mother was just 16 years old. His grandmother became his legal guardian. From a young age, he began rapping.

Talking about his academic career, he studied at  Dulles Elementary School and Banner School. Later, he went to Dyett High School and dropped out of high school at the age of 15.

Chief Keef released his mixtapes in 2011 and quickly drew the attention of local youths and his schoolmates. During the same time, he was home arrested on suspicions of carrying illegal guns, but he continued to publish videos on his YouTube account.

Because he was already a little star among the locals, his videos went viral. When Keef’s house arrest ended after two months, WorldStarHipHop posted a video on their YouTube channel showing a small kid laughing uncontrollably upon his release.

It demonstrated his growing popularity as well as his growing recognition of professional circuits.

His track “I Don’t Like” became extremely successful in Chicago’s nightclub circuits, catching the notice of Kanye West and launching his career. Kanye West was so impressed by ‘I Don’t Like,’ that he wanted to make his remix version featuring famous rappers like Big Sean and Pusha T.

Keef became a hot item among record companies throughout the summer of 2012. Young Jeezy wanted to sign him to his label, CTE World, but Keef refused it. In terms of music, the 2012 test was completely normal.

In December 2012, he released his debut studio album Finally Rich, which contained collaborations with well-known artists including Rick Ross, Wiz Khalifa, and 50 Cent.

He ultimately signed with Interscope Records in January 2013, which featured a three-album contract as well as the development of Keef’s own dream record label Glory Boyz Entertainment.

Gucci Mane announced in mid-2013 that Chief Keef will be a part of 1017 Brick Squad Records. He was seen on a track of Kanye West’s album Yeezus and featured in the song Hold my Liquor in mid-2013, and his involvement in it was praised by Kanye and the media.

In August 2013, he released his mixtape Bang pt.2, which garnered mixed reviews. By the end of the year, he had begun work on his third studio album, as well as a biography.

Begin to produce his music

Keef kept himself busy by releasing Back from the Dead, one of his most critically acclaimed mixtapes. Eventually, he released Big Gucci Sosa and Back from the Dead 2, which was later released as a digital download and was modestly popular.

He was praised for producing the majority of the songs in Back from the Dead 2. While his Bang 3 album was delayed, he released another album titled Nobody in November 2014, which featured a single from Kanye West and was widely praised by critics and fans alike.

Following the release of his next mixtape, Sorry 4 the Weight, in early 2015, he announced his next studio album, The Cozart. 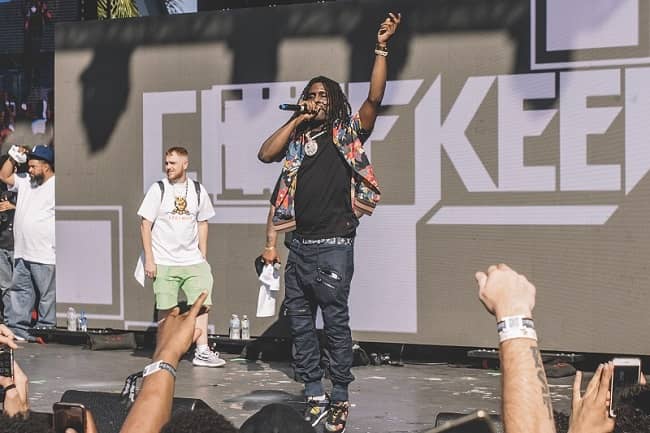 Caption: Chief Keef performance in front of a huge crowd (Source: The Sun)

Keef signed with FilmON Music in mid-2015. And he spent the rest of his time performing at concerts and collaborating with other hip-hop artists. He shocked his fans when he announced his retirement from rapping in March 2016.

Despite the news, he remained fairly active, appearing in MGK’s song Young Man later that year and releasing a mixtape called Two Zero One Seven in early 2017.

Chief Keef released four mixtapes before the release of his third studio album, Dedication, on December 1, 2017. According to the Guardian, Dedication is his “most satisfying album to date.”

He was able to release additional mixtapes in 2018, including Mansion Musick and Back from the Dead 3, as well as further mixtapes in The Leek series. Moreover, he also worked on more features for artists including Playboi Carti, Soulja Boy, and G Herbo.

He and Zaytoven collaborated in the studio in early 2019. He later stated that they were working on a mixtape called Glotoven. It was released on March 15, 2019, alongside the single “Spy Kid” On April 20, 2019, he announced the release of Almighty So 2, his second mixtape.

He then collaborated with Youngboy Never Broke Again on the song “Fireman.” The mixtape will also include appearances from Lil Uzi Vert, Soulja Boy, and Lil Reese, among others. He also released a brand-new track, “Boost.”

He gained his first big producing credit on Lil Uzi Vert’s second studio album, Eternal Atake, in March 2020, with the song “Chrome Heart Tags,” he was later featured on Uzi’s album Lil Uzi Vert vs. the World 2 with a vocal appearance on the song “Bean (Kobe)” which reached number 19 on the Hot 100.

This 27-year-old American rapper has not yet earned any kinds of awards or recognition at the moment. However, looking at his career success, he might earn some of them the in following years.

As of 2022, this American rapper has an estimated net worth of $2 million and he earns $100,000 per song. His main income sources come from his music album, YouTube, and concerts.

This American rapper is not yet married and might be single at the moment. However, in past, he was in several relationships. This rapper has four children from three different women.

At the age of 16, he had his first kid, a girl named Kayden Kash Cozart. In November 2013, DNA evidence revealed that he had fathered another kid, a daughter. Krue Karter Cozart, his third child, was born in September 2014. 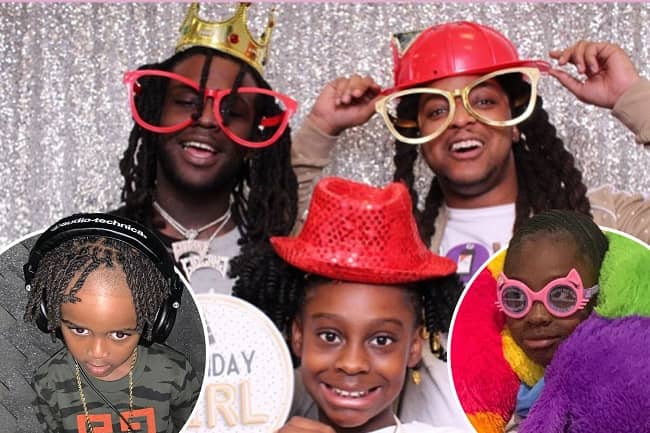 Caption: Chief Keef with his kids (Source: The Sun)

In 2015, he gave birth to his fourth child, a son. He caused outrage when he called his newborn baby Sno “FilmOn Dot Com.” In January 2013, his stepbrother was murdered. In April 2014, his cousin Blood Money was murdered in Chicago’s Englewood neighborhood.

He was arrested in January 2011 on heroin production and distribution allegations. Moreover, he was placed under house arrest. In December 2011, he was arrested and charged with three charges aggravated assault with a firearm on a police officer, aggravated unauthorized use of a weapon, and misdemeanor resisting arrest.

When police discovered a pistol on him, he was arrested. He ran away after displaying a pistol at the cops. Moreover, he was caught a half-block later. He was jailed in the Cook County Juvenile Detention Center for his offenses and eventually sentenced to house arrest.

In September 2012, he was investigated for his suspected role in the shooting death of another rapper, Joseph Coleman, also known as Lil JoJo. In early 2013, he spent two months in a juvenile prison facility for violating his probation.

In May 2013, he was detained in an upmarket hotel in DeKalb County, Georgia, for reportedly using marijuana in public and engaging in disorderly behavior. In the same month, he was caught in Chicago for driving 110 mph in a 55 mph zone.

He was sentenced to a $531 fine, 18 months of probation, 60 hours of community service, and random drug testing. In October 2013, he received a 10-day prison term for breaking his probation.

Later, in November 2013, he was sent to jail for another probation violation. In February 2014, Kim Productions sued him for failing to perform at a RapCure charity event in Cleveland.

This rapper stands 5 feet 11 inches tall and weighs around 76 kg. Moreover, he has dark brown eyes, black hair color, and several tattoos on his body. 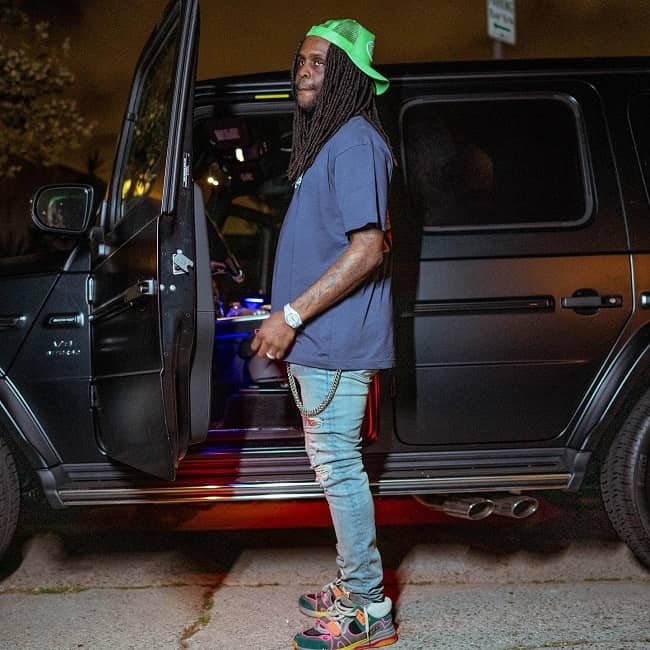