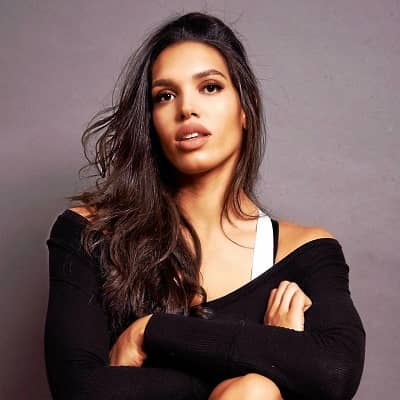 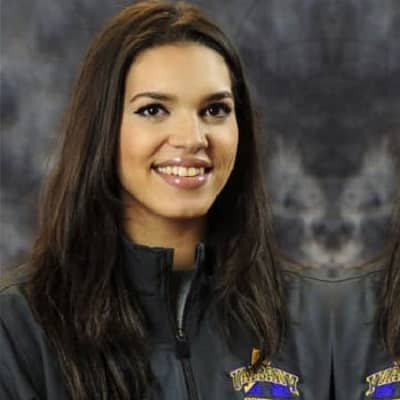 Charlise Castro’s birth date is May 13, 1992, and her birthplace is Saugerties, New York, U.S. She was born as Charlise Kristine Castro to her parents, Angel Castro (father) and  Janelle Castro (mother). Likewise, her age is 28 years old and her horoscope sign is Taurus. Charlise even has a brother and his name is Andre Castro. Moreover, she follows the Christian religion and is a citizen of America. Also, she belongs to the Latin ethnicity.

Coming to Charlise’s educational background, she went to Kingston High School. Then for her further education, she attended the University of Maryland-Eastern Shore. After that, she moved to the University of Albany. Even though she was very interested in Psychology but, she completed her studies and got a degree in Communications in the year 2014. Moreover, Charlise joined the University of Saint Rose and from there she received a Master of Business Administration degree. 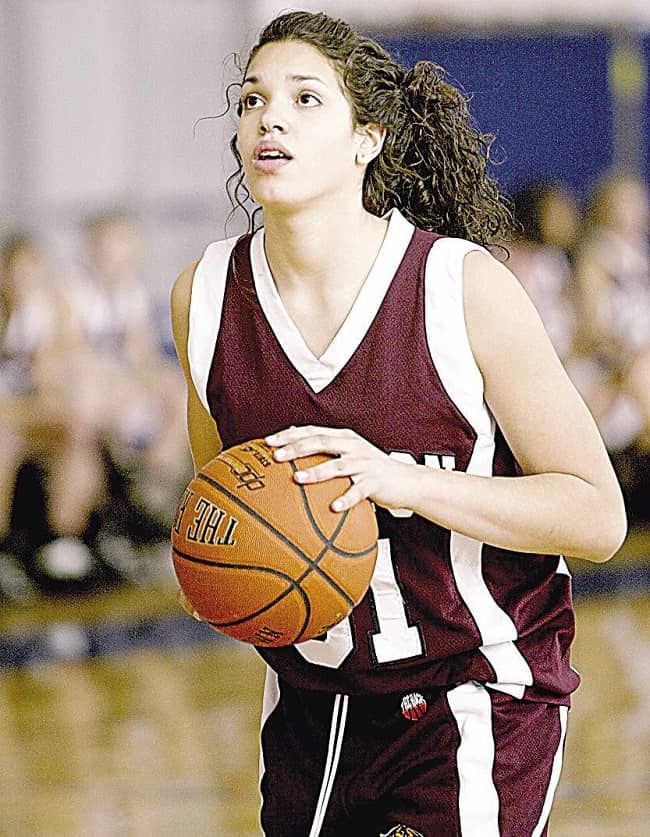 Caption: Charlise Castro when she was young (Source: Times Herald-Record)

Charlise initially developed her interest and love for playing softball from a very early age. When she was still in her high school days, she was a part of the school’s team as a catcher and 2nd base and was also finally promoted to captain of the team in the year 2010. Castro used to play basketball as well as volleyball. These all helped her a lot achieve a Division I scholarship, and to being selected to present Puerto Rico as a part of its national team at the World Cup of Softball in the year 2012. Then, Charlise resumed playing softball at Maryland-Eastern Shore. She was also given the name of the Mid-Eastern Athletic Conference Rookie of the Year. After moving to Albany, Castro becomes the winner of her 2nd notable fame, the 2012 American East Conference Player of the Year.

This also helped her to become the 2nd player in the history of the conference to get a victory on the league’s triple-crown with a .461 average, 13 home runs, and 53 RBIs. Even though she achieved various offers to more pursue her career as a professional softball player, Charlise refused all down and admiring herself to help with everyone’s health and fitness. As of now, Castro has a profession as a personal fitness trainer and wellness educator at SWEAT 1000. It is a gym situated in Houston, Texas, and often shares workouts and numerous healthy recipes with her fans and followers. Now coming to her husband’s career, George’s professional career started after he was chosen as the eleventh largely pick in the 1st round of the 2011 MLB Draft by the Houston Astros.

After signing a contract with the team, George was in a game in small leagues, and in the Texas League All-Star Game. He also was the winner of its Most Valuable Player (MVP) award. He was also given the name of the Texas League Player of the Year. In the year 2014, George made his MLB appearance for the Astros in the game opposite to the Kansas City Royals. He completed his intern season with seventy-eight games played, batting average .two hundred thirty-one with twenty home runs, fifty-one RBIs, and one hundred and fourteen strikeouts. They were the winner of the MLB wild card and finished at the year of 2015 American League Division Series in the following year. While in the 2016 season, George raised his ability and was present in the game in all one hundred sixty-two games

In the game, he scored one hundred and sixteen runs, twenty-nine home runs, and eighty-eight walks. Then, in the year 2017, he was transferred from the spot of the right field to the center field. Soon he even was given the name of the American League Player of the Week. In the same year, George took part in his 1st MLB All-Star Game and completed the season winning the Silver Slugger Award. Additionally, he has made 2 more MLB All-Star presence in 2018 and 2019. Also, they were the winner of the 2019 Silver Slugger Award. George is even recognized for stuttering. He learned numerous tactics which also made it easy for him to talk fluently. Also, George currently works as the spokesperson at the Stuttering Association for the Young. 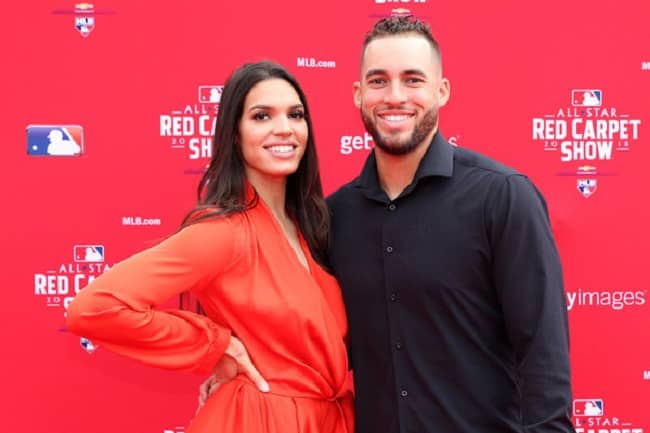 Caption: Charlise Castro with her husband at an event (Source: Zimbio)

The celebrity wife is also an independent woman. Charlise has a good net worth of about $1 million. Similarly, her primary income source is from her career as a softball player, model, and fitness trainer. On the other hand, her husband, Geroge Springer has a stunning net worth of about $8 million. And his income source is from his career as a talented and famous baseball player.

Charlise Castro and George Springer met each other while Castro was playing softball internationally. Soon after they got to know each other, they began dating. Then, in December 2016, they announced their engagement. Before that, George surprised when they were on their vacation. He proposed her by writing a question “Will You Marry Me?” in the sand in San Jose del Cabo, Mexico. Then, later the Houston Astros shared an image of the proposal on their official Twitter account.

After all those romantic things, the couple finally got married at a glamorous outdoor marriage in January 2018 at the luxury Resort of Pelican Hill, situated in Newport Beach, California. For her wedding, she wore a mermaid-style wedding dress with lace. In the Inside Wedding’s view, Charlise walked down the aisle to the “Game of Thrones” song as the theme song. It was like dream come true for Charlise to have an amazing and most romantic life. Apart from this, she and her spouse are not into any kind of rumors and scandals. 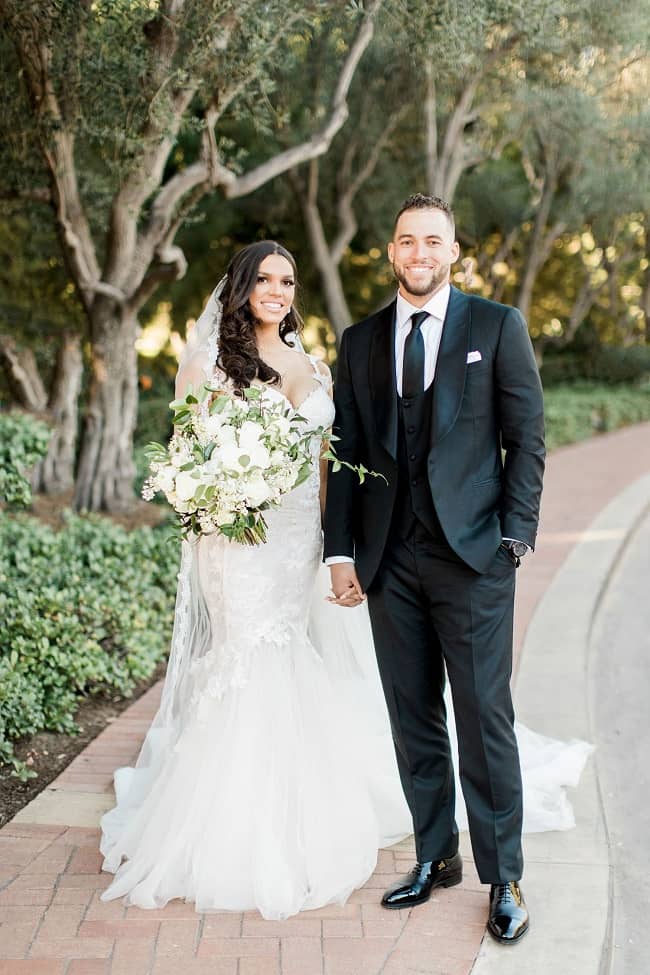 Caption: Charlise Castro with her husband at their wedding (Source: Inside Weddings)

Talking about Castor’s body measurement, she physically seems very good and fit. She has a height of about 5 feet 10 inches or 1.77 m tall. However, there is no information regarding her weight, body measurements, dress size, etc. Also, being a fitness instructor and athlete, she obviously has an amazing curvy figure with a slim stomach and a well-maintained body. She is as healthy as she looks outside. Moreover, she has a pair of brown eyes with beautiful brown hair.