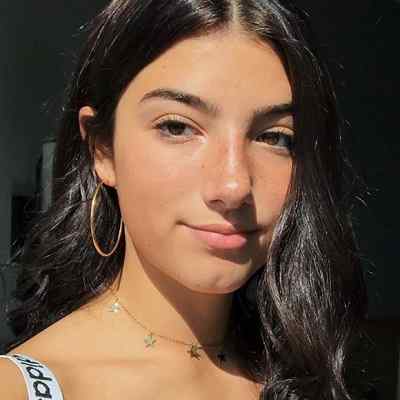 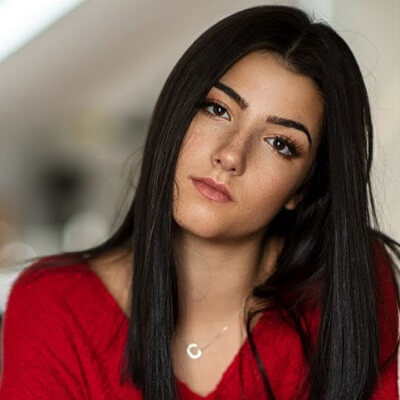 Charli D’Amelio is a famous energetic TikTok star who has gained fame through her eye-catching dance moves. Charli D’Amelio has earned 79.9 million followers for her dances with original choreography, montages, and lip-syncs.

Charli D’Amelio is 17 years old. Reviving her early life, she was born on May 1, 2004, in Norwalk, Connecticut, United States. Her father’s name is Marc D’Amelio and her mother’s name is Heidi D’Amelio.
Both of her parents are social media personalities and also post TikTok videos on their respective accounts. She has an elder sister named Dixie D’Amelio who is also a fellow TikTok star. Among D’Amelio’s sisters, she is more energetic. 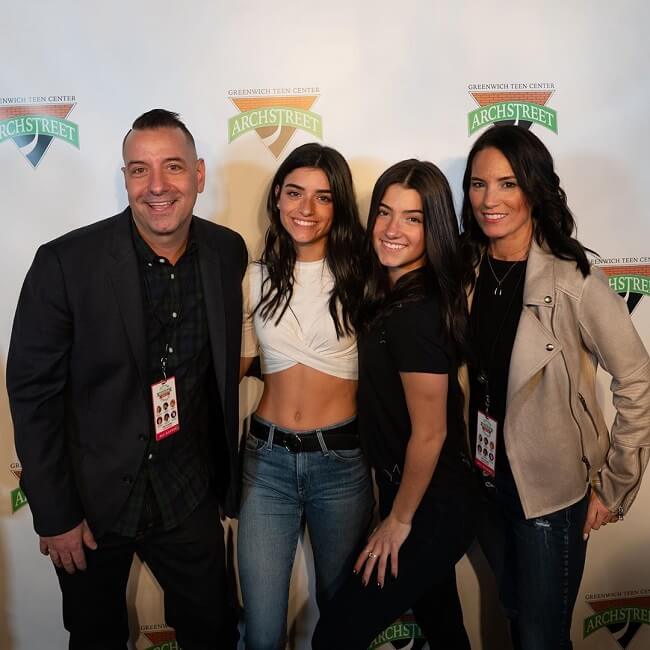 Caption: Charli D’Amelio posing with her family at an event (Source: Instagram)

Likewise, talking about her nationality, she belongs to America by nationality. Talking about her childhood days, she had a very great experience with a lot of support and attention from her parents.
Her parents were always satisfying everything she needs to pursue what she wants.

Moving toward her educational background, she is currently a high school student. She is studying is King School which is located at 1450 Newfield Avenue, Stamford.

This young and talented 16-years old  Internet star Charli D’Amelio is a famous social media star who has earned a huge amount of money from social media. She earned good fortune within a very few months of stepping into the TikTok world.

Likewise, she made all her fortunes from the Internet. As of August 2020, she has an estimated net worth of $4 million. She is surely the biggest inspiration to all of us. She lives a very joyful and blissful lifestyle along with her family.

As Forbes published a report in August 2020 reporting she has earned $4 million in the last year from her numerous sponsorship deals and merchandise, making her the second highest-earning TikTok star, following Addison Rae.

Being a social media personality, she is active on different social media platforms like Instagram, TikTok, Snapchat, Twitter, Facebook, YouTube, etc. She has gained huge popularity on her social media, especially with youth fan followers.
On Instagram, she goes by the handle @charlidamelio where she has gained around 27.2 million followers.
Likewise, she has gained around 1.4 million followers on her Twitter account and more than 113k followers on her Facebook account. Her most-famous TikTok account has garnered 79.9 million followers with more than 5.9 billion likes.
Additionally, she has created her YouTube channel and has amassed 3.48 million subscribers and almost 38,777,738 views. Further, she has also provided her email id [email protected] for any kind of business inquiries. And, she also has merch.

Talking Charli D’Amelio’s career, she gained popularity through lip-syncing social media platform Tiktok and currently is a famous social media personality. She stepped started in the social media world through Instagram.
Similarly, she often posts throwback pictures of herself and her sister. Also, she started posting photos of herself along with photos with her family on her Instagram page. Her oldest Instagram post dates back to July of 2016.
Later, in mid-2019, she joined the TikTok platform. She started posting her sharing lip-synch and dance videos with excellent performances. The first video which caught the eye of many viewers and blows up on TikTok was a duet with Move to Joy.
Currently, she has made her space on the Top Tiktok personalities within a very short period. At present, she has already uploaded more than 350+ videos which have garnered 51.5 million followers and 3.4 billion likes. And is no doubt, that she has widespread popularity.
Likewise, she attended her first-ever meet & greet on November 17th, 2019. The meet & greet event was carried out at 48 Westport Avenue in Norwalk, Connecticut.
She announced her second meet & greet MistleTok Meet-Up happened in late November. The event was held on December 14th and 15th at the Arch Street Teen Center in Greenwich, Connecticut.

Likewise, she became popular after uploading a dancing video for the video “Lottery (Renegade).” She has collaborated with several other popular TikTok creators and has been featured in collaborations on her channels such as Chase Hudson and Maximo Rivano.
In December 2019, she co-operated with Ondreaz and Tony Lopez on a dance video set to the Don Toliver song “No Idea.”

Similarly, she is also a part of the collaborative TikTok web group “Hype House” along with 18 others including Dixie D’Amelio and Addison Rae Easterling.

She has been invited to the NBA All-Star game, presenting with fellow Hype House members Addison Rae, her sister Dixie, and the creator of the “Renegade” dance, Jalaiah Harmon.

In November 2019, she graced the big stage at the Barclays Center in Brooklyn, New York. She acted alongside Bebe Rexha as an opener for the Jonas Brothers as part of their Happiness Begins tour.
In January 2020, she has contracted with the talent agency UTA. for joining TikTok’s Hype House collective in LA.
She also fulfilled her life dream in 2020 when she had the chance to dance alongside her idol Jennifer Lopez for a Super Bowl challenge on the TikTok video. On March 27, 2020, she collaborated on YouTube with actor Noah Schnapp.

In February 2020, she appeared in a Super Bowl commercial for Sabra Hummus along with other celebrities.

At the 2020 NBA All-Star Game, she presented a dance with fellow Hype House members, as well as Jalaiah Harmon. She even appeared as a front-row guest at Prada’s Milan Fashion Week show in February 2020.

In March of 2020, she and her sister partnered with UNICEF for an anti-bullying campaign. In May 2020, the D’Amelio sisters announced a podcast deal with Ramble Podcast Network.

She even starred as Tinker in the June 2020 United States release of the 2019 animated children’s film StarDog and TurboCat, marking her first role in a feature film.

Moreover, she became the face of Hollister’s “Jean Lab” campaign with her sister in July 2020, even creating a TikTok dance to promote the campaign.

In the same month, she became an ambassador for braces brand Invisalign, while she and her sister collaborated with Morphe Cosmetics to launch Morphe 2, a makeup line. The sisters also launched a nail polish collection, called Coastal Craze, with Orosa Beauty in August 2020.

Apart from TikTok, she has also launched her self-titled Youtube channel on November 23, 2015. However, she started posting videos after her widespread popularity on the Tiktok platform. She has garnered 3.48M subscribers within five months.
She uploaded her first video titled “what happened at my meet & greet,” on November 24, 2019, which racked up 3 million views in 2 weeks.  Currently, the video has gained almost 9,812,776 views.


Her YouTube video titled “My Friends and I Crashed the Santa Monica Pier with Jordan Matter | Charli D’Amelio,” has gained 11,952,215 views. 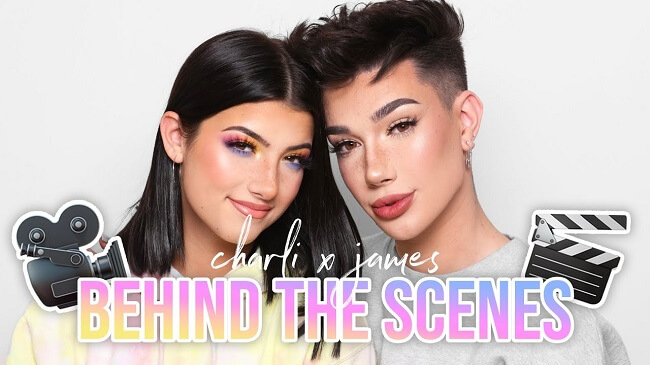 Besides her social media career, she is also a director and actress, recognized for StarDog and TurboCat (2019), Charli D’Amelio (2019), and The Disney Family Singalong (2020).

Is Charli D’Amelio dating someone?

Reflecting on Charli D’Amelio’s personal life, she is single currently. However, she is very secretive about her relationship. Currently, her main priority is in her social media career.
Talking about her past linkup, she began dating a fellow social media personality Chase Hudson in late 2019. However, she confirmed their breakup in April 2020. 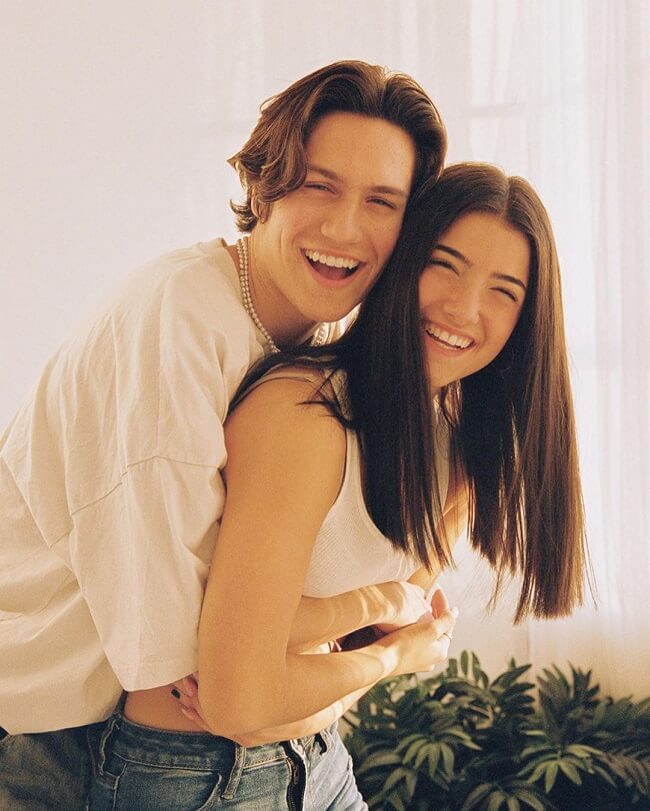 Similarly, she has been subjected to bullying and body shaming. She and her sister, Dixie, have even partnered with UNICEF, talking out against online bullying and the risks of finding fame on the platform.

Furthermore, she has not been through any kind of drastic rumors as well as controversy in her personal as well as professional life. She has maintained a very clean image with a good profile.

Beautiful and young Charli D’Amelio has a very charming personality. Observing her body physics, she stands a great height 5 feet 7 inches tall, and weighs around 52 Kg.
Likewise, she has a curvy hourglass body with a pair of dark brown eyes and black hair color. Further, there is no other information regarding body statics.