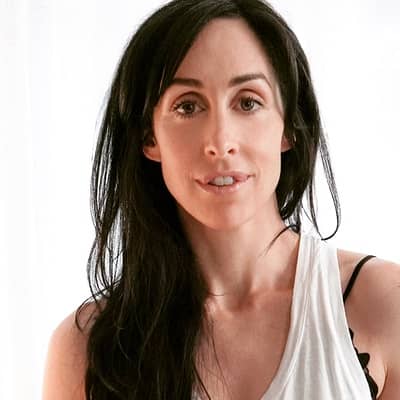 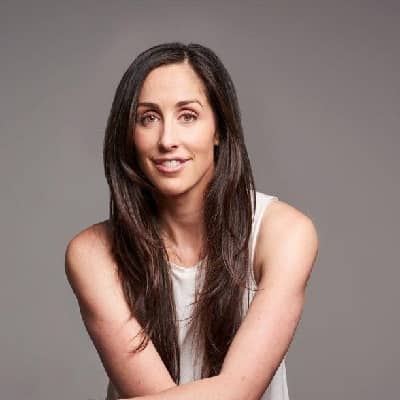 Catherine Reitman’s full name is Catherine Marcelle Reitman. Reitman was born on 28th April 1981, in Los Angeles, California, United States. Similarly, she holds both American and Canadian nationality. The actress’s current age is thirty-nine years old and her zodiac sign is Taurus. The name of her parents is her father, Ivan Reitman, and her mother, Geneviéve Robert. Moreover, her father is a Slovak-born Canadian movie director and her mother is a French and Canadian actress.

Her dad is from a Jewish family so her mom then changed her religion to Judaism. The actress even has two siblings and they are Caroline Reitman and Jason Reitman. Her brother, Jason Reitman is a director. Regarding her educational background, she went to the Cate School for her school education. Later, she attended the University of Southern California where she majored in acting. 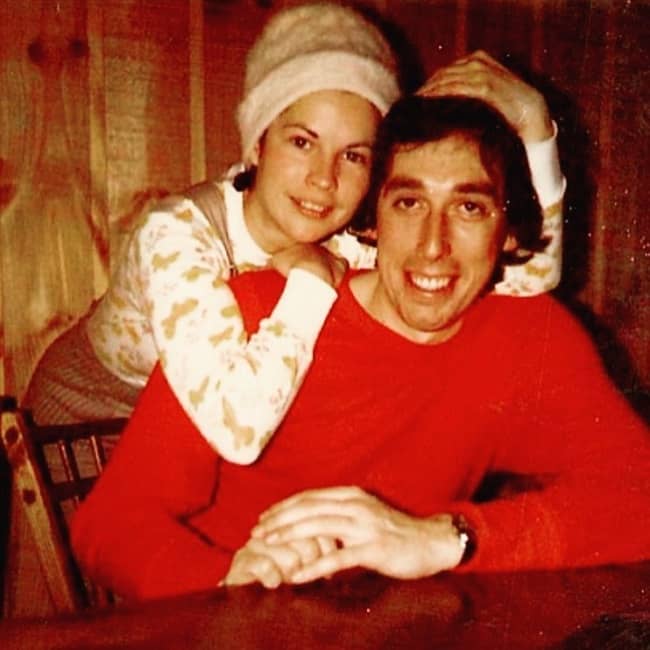 Caption: Catherine Reitman with her dad when she was young (Source: Instagram)

Catherine Reitman came up with a  movie review web show, “Breakin’ It Down with Catherine Reitman” on YouTube in January 2011. The show came to an end in July 2013. The actress even sometimes filled in for Kevin Smith together with Ralph Garman on their podcast, “Hollywood Babble-On” as a guest co-host. Then, she was present in the TV series “The Real Wedding Crashers” which is related to the famous film “Wedding Crashers”.

Likewise, the actress was present in the movies “Knocked Up” in the year 2007, “I Love You, Man” in the year 2009, and also in “Friends with Benefits” in the year 2011. Furthermore, she was even present in several series such as “How I Met Your Mother”, “Hollywood Residential”, “Weeds”, “It’s Always Sunny in Philadelphia”, and “Blackish”. Then, she created “Wolf & Rabbit Entertainment ULC” in the year 2016 together with Philip Sternberg.

They created the half-hour, single-camera comedy “Workin’ Moms” for CBC. She is also the creator, executive producer, writer, and star of the series, working together with Sternberg. Also, she was the director of numerous episodes in every series season. Moreover, “Workin’ Moms” has achieved 5 Canadian Screen Award nominations in the year 2017 adding Best Actress, Comedy, for her, and Best Series, Comedy.

For 5 years, Philip Sternberg was working as President of Candor Entertainment. There, he was responsible for preparing the company’s string of successes. It adds the feature documentary “Divorce Corp” whose narrator was Dr. Drew, “Six Little McGhees” for OWN, and also “The Super” for AXS. Similarly, the actor has also made pilots for broadcasting channels such as Vh1, History Channel, Spike TV, and also Showtime. Moreover, Philip has also worked on several web series for Hulu, Revision 3, and Discovery Channel among others.

Then, in 2016, Philips together with his wife worked together as mentioned before. It also promoted him for the nomination for an International Emmy Award. The series was out on 10th January 2017. Moreover, Philip Sternberg is an executive producer of “WORKIN’ MOMS”. For the same series, he has directed numerous episodes over the series 2nd and 3rd seasons. He has shared the screen with his wife on the series. Philip’s character for this series was Nathan Foster, and the couple was acting as husband and wife on-screen as well. 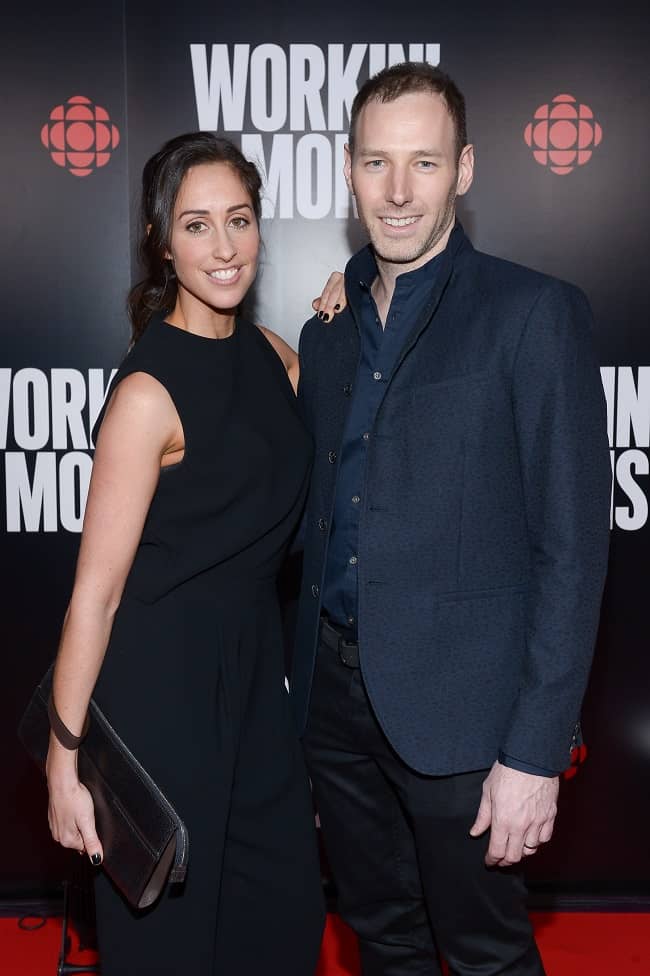 Caption: Catherine Reitman with her husband at an event (Source: Glamour)

She has a good net worth of around $1.3 million. The artist has been earning her fortunes from her successful career as an actress, writer, and singer. On the Other hand, her husband has another good net worth of around $1 million. Philips’s primary source of income is from his profession as an actor, producer, and also director. As of now, the couple has been living a luxurious and happy life together with their children.

The talented actress, Catherine Reitman is the wife of Philip Sternberg and their wedding was in September 2008, in Santa Barbara, Calif. Philip Sternberg is a popular producer, director, and also an actor. Also, their wedding was at her parent’s house and they went to Italy for their honeymoon. She and Philip got to meet for the first time when picking up the paycheque for one of her friends after having an audition. At that time, the actress was wearing shorts and had two hair braids.

Her look was for a character that she was unable to get. Then, Philip gave her the cheque which eventually made them attractive to each other. After 3 months, the couple again got to meet each other at an event. It was the time when they got their relationship forward. They went to the cast and crew recording for “Knocked Up together”. After that, they were moving faster and forward in their relationship.

After being in a relationship for 6 years, they did their engagement. It was Philip Sternberg who proposed to her with a well-planed proposal which led to their successful relationship as well. She went Together the couple is the parents of two adorable boys and their names are Jackson and Liam. As of 2021, the couple’s elder son turned eight years old whereas their younger son has turned just four years old. 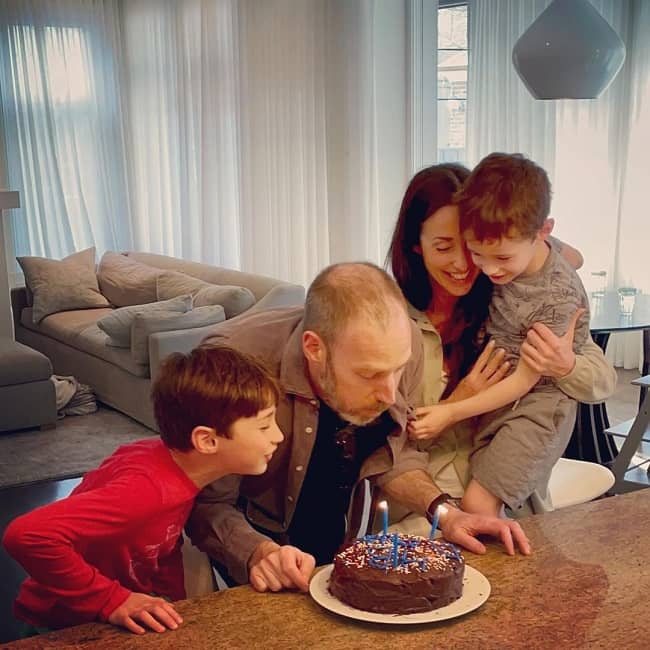 Talking about the actress’s body measurement, Catherine Reitman has a good height of 5 feet 6 inches or 165 cm. The actress also has a slim body type with a bodyweight of around 60 kg or 132 lbs. Similarly, she has a pair of hazel eyes with dark brown hair. The size of her waist is 27 inches, her hips are 35 inches, and her breast size is 34. Also, the size of her bra cup is 32 B and she wears a shoe size of 4 (US). Moreover, she has a fair complexion with a very pretty face and attractive body shape.

Coming to the social media part, she is quite active there. She has an Instagram account and a Twitter account as well. On Instagram, she has managed to gain 166 thousand followers and on Twitter, she has gained 27.3 thousand followers. The actress is not shy and is very proud of her family. So, she often uploads images and posts of her family and her career as well. However, her husband, Philip Sternberg is not active on any of the social media platforms.