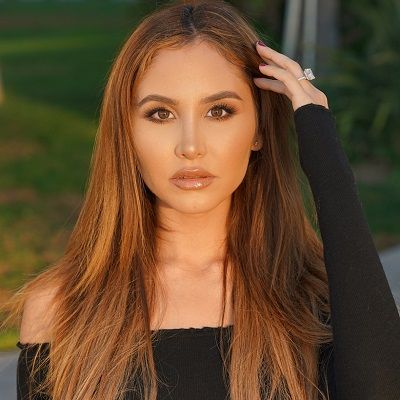 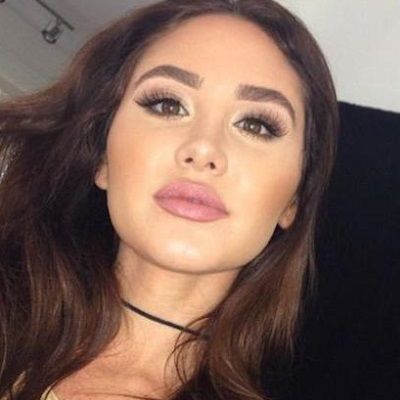 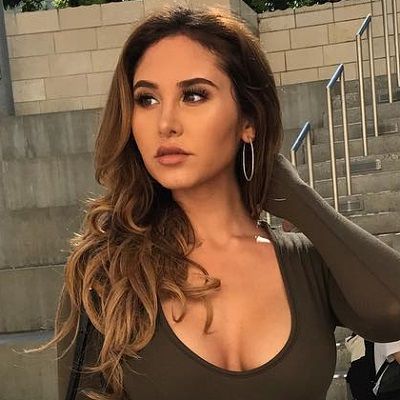 Catherine Paiz is a Canada-born model-turned-YouTuber. Catherine Paiz is also a famous Instagram star and a media personality. She runs the YouTube channel “The ACE Family” along with his fiancee and other family members.

Catherine Paiz was born on 24 August 1990 in Montreal, Canada. Her full name is Dolores Catherine Johnston Paiz and her age is 32 years old as of 2022.

Likewise, her parents are Panamanian, but she has not revealed their names or any additional information.

Moreover, she has two younger brothers, namely Ryan and Josh. She also has an unnamed younger sister.

Furthermore, Catherine moved to Miami in 2011 for further education and opportunities. At present, she has been living with her fiancee and family of four in Los Angeles, California. 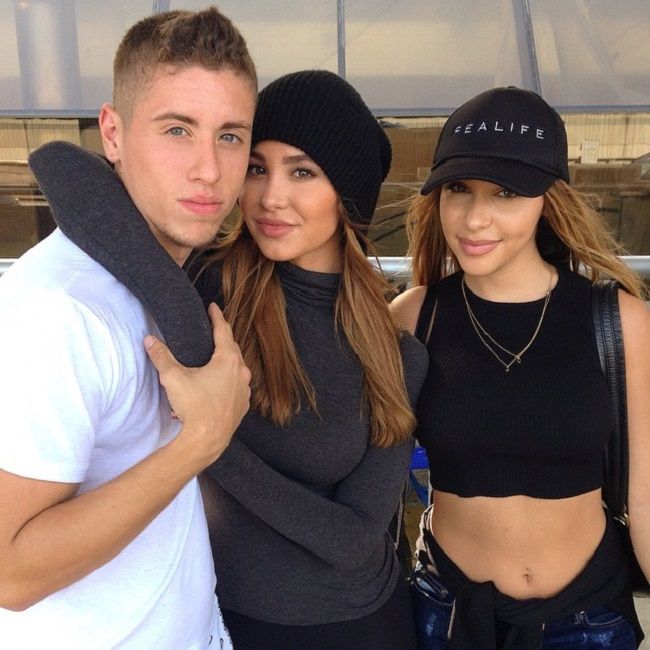 Information regarding Catherine’s education is not mentioned to the public. However, she attended Saint Louis University, where she met her future fiancee, Austin McBroom.

Furthermore, Catherine can speak three languages – English, French, and Spanish. During college, she played various sports like volleyball and basketball among many others.

Moreover, Catherine’s mother used to drive an hour daily to drop her to school. Further, Catherine used to play hockey, along with soccer and volleyball in school, and she also took swimming lessons.

She later relocated to Los Angeles, California for better modeling and acting opportunities.

Being a media personality, Catherine has a large number of followers on several social media platforms. She has 8 million followers on Instagram and 1.7 million on Twitter. Similarly, she has 18.9 million subscribers on her joint YouTube channel.

She runs a YouTube channel named The ACE Family with her fiancee and family. They started the channel in 2016, and they are famous for the videos that include pranks, challenges, reaction, and their daily family life.

Catherine married her love of life Austin after dating for a long period of time.

In January of 2019, the duo uploaded a brand new video to their YouTube channel called “WE GOT MARRIED … (THE TRUTH).” They explained they got married two years ago under very casual circumstances.

Catherine Paiz got engaged to former NACC basketball player, Austin McBroom in August 2017. At present, Austin is also a social media personality and YouTuber like Catherine.

The couple started dating in 2015. Likewise, they have two daughters together, namely Elle and Alaia.

Furthermore, Catherine and Austin are expecting their third child together. This time, it’s a boy! After several months of silence and privacy, Catherine disclosed the news to the world with an Instagram photo on 3 January 2020.

However, she didn’t share when the baby is due. Austin also shared the news on his Instagram account through the first ultrasound video of the baby boy.

Love-story of Austin and Catherine

Moreover, Catherine officially met Austin at a party in the year 2015. However, the two knew each other for a few years since they both attended St. Louis University.

About a month after their first meeting, Austin sent her a message, but she responded only after a month or so.

When Austin asked her out for a dinner, she accepted the invitation even though she didn’t go on dates at that time.

A few days later, Catherine invited him to go hiking and the two began dating soon after. They started seeing each other despite knowing that Austin was planning to transfer to East Washington University.

But the lovers continued their relationship even after Austin moved there. After Catherine unexpectedly became pregnant with their first child, the pair decided to keep the child and planned to have a family together.

And the rest is a history we can watch and get to know through their Youtube and Instagram posts.

Catherine Paiz and Austin McBroom received an award titled Board of Governors at the 10th Annual Thirst Gala on 28 September 2019.

They were awarded for using their platform to raise awareness for the Thirst Project which is working to fight against the water crises around the world.

Similarly, the couple also received an award titled Name a Better Duo at the Premio Juventud Awards 2019. Likewise, Catherine’s estimated net worth in 2019 is $3 million. 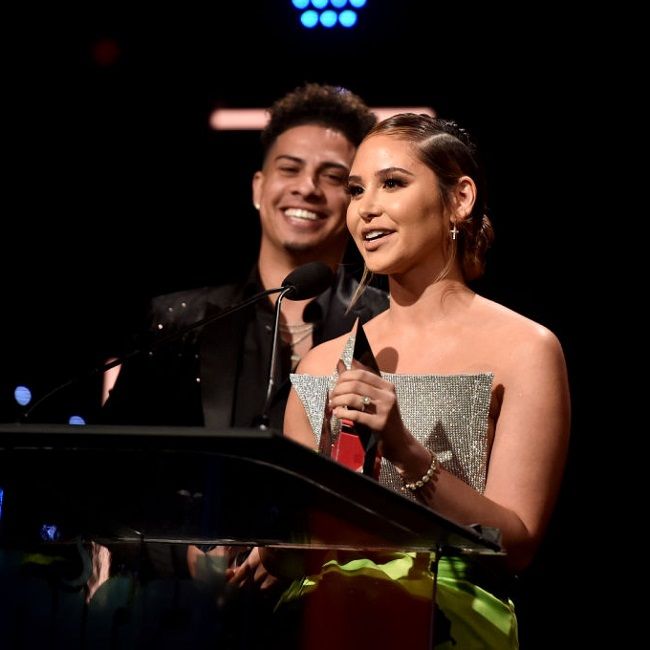 Catherine Paiz and Austin McBroom received an award titled “Board of Governors” at the 10th Annual Thirst Gala on 28 September 2019. Source: Newsweek

Catherine is a well-known YouTuber and Instagram star. Prior to this, she was a fashion and fitness model. Likewise, she started modeling at the young age of 16, and her first job was at Victoria’s Secret.

Before she gained fame, she did several types of jobs including working at the ice-cream parlor, manager, and TV host among others.

Furthermore, Catherine also modeled for Azzelia Swimwear after model Rali Ivanova launched it in 2013, and through more modeling gigs, she made a name for herself as an established model.

She also worked for Arkadia Miami as a VIP manager. Moreover, Catherine is also an actress, who has starred in movies like Lilin’s Blood, Monday Night at Seven, and You Can’t Have It.

Her boyfriend, Austin McBroom, also had a huge fan base on Instagram just like herself. Hence, the couple decided to utilize their online fame in January 2016 and created a Youtube channel The ACE family.

This channel name was created by using the initial letters of each other’s names as well as their then-unborn child, Elle’s initial.

They posted the first video The ACE Family Q&A on July 27, 2016. It was shared one month after the birth of their daughter, Elle.

Since then, they have turned the channel into a family vlogging channel, with occasional challenges and prank videos.

Their Youtube videos have been appreciated and attracted lots of fan followers. One of the most viewed videos on the channel is titled “THE BEST PROPOSAL OF ALL TIME!!! (JUMPING OUT OF A PLANE).” It was posted on August 27, 2017, and has got over 34,933,757 views.

Some of the other notable videos on the channel that should be must-watched by individuals for full entertainment include titled “THE BEST PRANK OF ALL TIME!!!,” “THE OFFICIAL ACE FAMILY LABOR AND DELIVERY!!!,” “SHE’S FINALLY HERE!!! **EVERYONE MEET OUR NEW PRINCESS**,” “EPIC CAR ACCIDENT PRANK!!!,” “THE ACE FAMILY – YOU’RE MY ACE ( OFFICIAL MUSIC VIDEO ),” and more. These videos have crossed over millions of views.

Their latest uploads on the channel are “FINDING OUT OUR NEW ADDRESS GOT LEAKED ON TIKTOK…,” with over 3.5M views, and “CATHERINE WAS IN SHOCK TO FIND THIS OUT…” with over 4.7M views as of April 2020.oo

Catherine Paiz has a well-built body that weighs approximately 54 kg and stands 5’7″ tall in height. Likewise, she has beautiful hazel eyes and brown hair.

She often experiments with her hair color. Dark brown and peach are among the colors Catherine has experimented with. She has a chest-waist-hip body measurement of 34-25-35 inches respectively.

She has a body fit for resuming her modeling career anytime. But currently, she is pregnant and hence her body measurements might fluctuate for some time.

Furthermore, Catherine is very open about the surgeries she has undergone. She admitted to having a breast augment and a nose job.

She also openly shares about the teeth re-assignment/gum surgery she underwent prior to her fame.