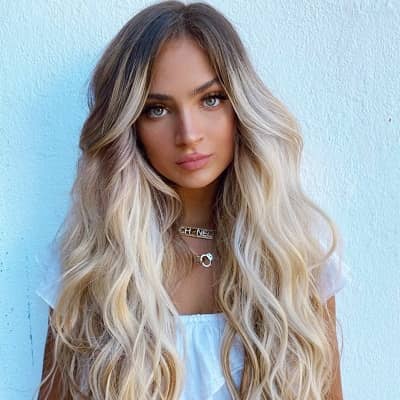 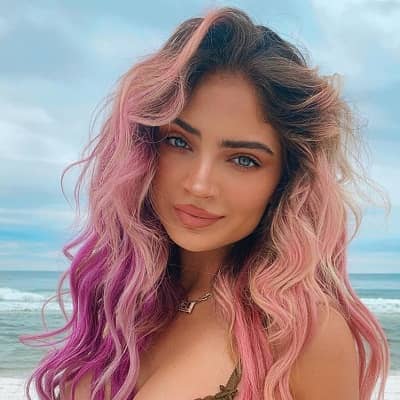 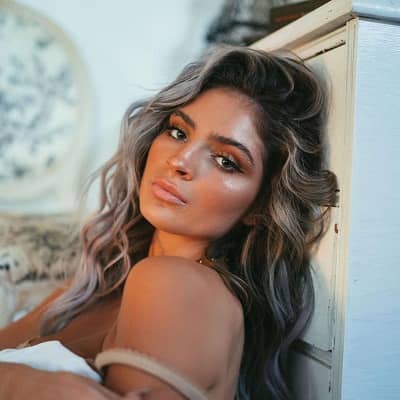 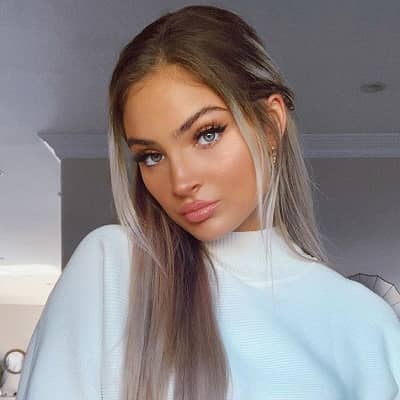 Carrington Durham is an American social media star, model, actress, and singer. Carrington Durham recently released her song titled “Shimmer” along with its accompanying video. She has also appeared in shows and series like “Teens Wanna Know”, “Hole in the Wall”, “10 Seconds”, etc.

Carrington Durham was born on September 26, 2000, and she is currently 21 years old. She is originally from Nashville, Tennessee and she also spent her childhood in Southern California. Likewise, her full name is Carrington Brooke Durham.

Talking about her family, Carrington has a sister named Isabella. Likewise, Carrington’s father owns a golf course and is an entrepreneur. She always knew she wanted to act and her parents supported her dreams and made sure she pursued them. To move forward with her dream, her parents helped her get home-schooled and additionally enrolled in acting classes.

Moreover, Carrington loves to cheerlead and was a star cheerleader until the age of eight. She also loves spending time with her family and friends and continues to carry out her family traditions together.

At present, Carrington lives in Los Angeles with her mom and sister to pursue her career. However, her dad and the rest of the family stayed back in Tennessee. Her mom and sister dangle between Tennessee and California. Carrington’s parents support her career and her mom even plays the role of her manager. She appears to be very close to her sister, Isabella, who has featured on her channel and the two seem to be inseparable. 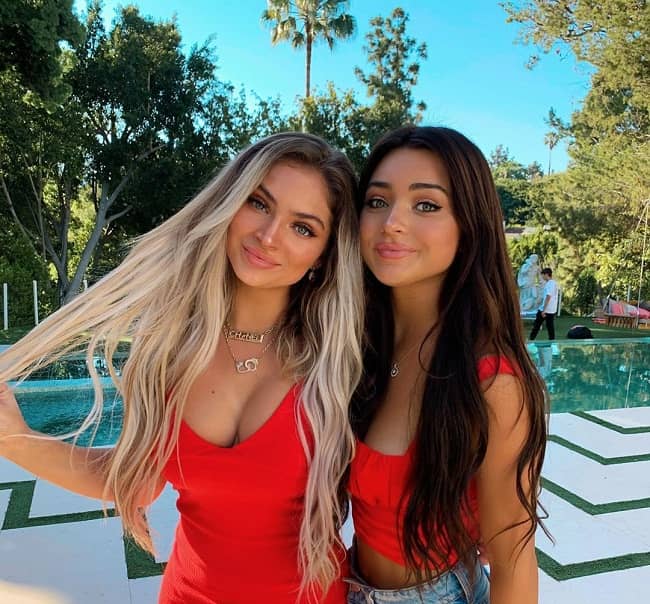 Caption: Carrington Durham posing for a photo with her sister Isabella in a matching red dress. Source: Instagram

Professionally, Carrington Durham is a famous actress and YouTube personality. She is also a model that has attracted over 1.3 million Instagram followers. She is also popular for her appearances on the series Teens Wanna Know and as a member of CloutGang.

Likewise, Carrington launched her Instagram account in late 2012 and, around this time, appeared in an episode of the television series 90210. Moreover, she did some volunteer work at schools in Guatemala in August 2018. She also joined the clubhouse social media collective.

Additionally, Carrington’s friendship with the wildly popular YouTuber Sam Pottorff was the subject of much romantic speculation among her social media fans, which proved to be just speculation. Likewise, people follow her on social media for her sense of style, her hairdos, and her fashion statements. She also regularly posts various makeup tutorials and other challenges on her channel.

Carrington started at a young age and her audiences liked her instantly. She has also appeared on various TV shows such as ‘Teens Wanna Know’, ‘Hole in the Wall‘, and ’10 Seconds‘.  Moreover, Carrington is also a model, which isn’t a surprise due to her alluring features and great physique.

Carrington also uses social media to promote various brands and products that she endorses. Furthermore, Carrington continues to take acting classes despite already being established as an actress in the industry. Along with appearing in several popular movies and TV shows, Carrington also features in several advertisements by top brands.

Furthermore, it was after featuring on the show ‘Teens Wanna Know’ that she finally came into the limelight. Carrington has since starred in ‘The Muppets Movie’ and numerous advertisements for Sony Pictures, Boohoo, and many other brands.

Also, Carrington’s Youtube channel ‘CarringtonOfficial’ is where she uploads videos of her doing make-up tutorials, workouts, hair tutorials, trending challenges, and much more. Her boyfriend and sister often feature in some of her videos. Other social media personalities, including Taylor Caniff and Sam Pottorff, have made numerous appearances on her social media pages and she appears to be very close to the two.

She refers to Taylor Swift as her role model and she hopes to be as inspiring as Taylor has been to her. Likewise, she continues to work hard and is slowly expanding her horizon in the entertainment industry. 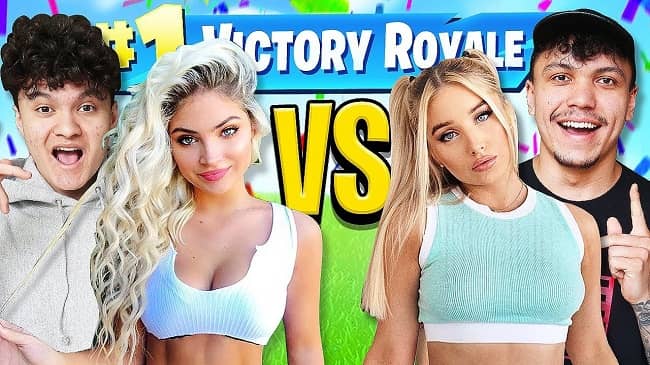 At present, Carrington Durham is romantically involved with FaZe Blaziken (Lucas). Blaziken is also a social media star just like Carrington. The couple features each other in their social media posts on their respective accounts. Moreover, the couple recently celebrated their first anniversary in July 2020.

Before Blaziken, Carrington was in a relationship with Jai Waetford. The two dated each other from 2015 to 2017. Jai is a singer and he was a participant in X Factor Australia. 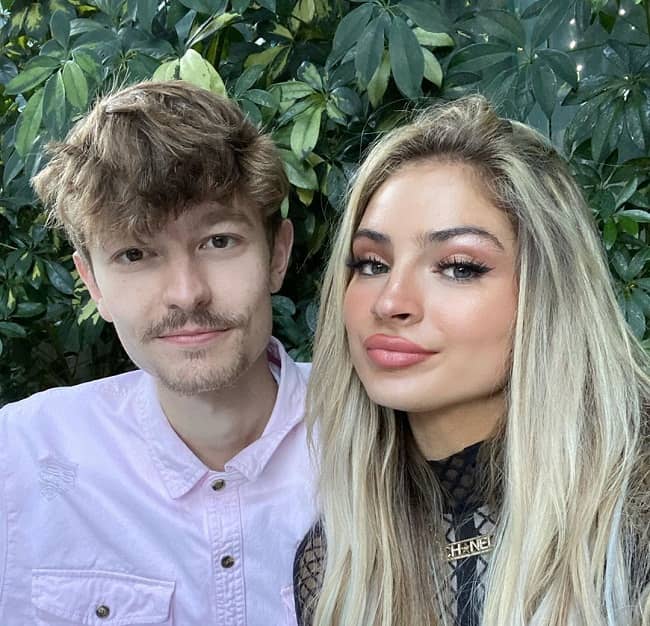 Carrington Durham stands tall at a height of approximately 5 feet 6 inches and weighs around 112.5 pounds or 51 kgs. Likewise, the actress and model’s bust measures about 34 inches, waist about 24 inches, and hips about 35 inches. Furthermore, she prefers a dress size of 0-2 and a shoe size of 9. Likewise, she has hazel eyes and naturally brown hair which she often dyes into several shades.

Talking about her social media presence, Carrington Durham joined Twitter in February 2013 and so far has over 26.9K followers on her @carrington125 account. Likewise, it goes by @carringtondurham on Instagram. This account boasts 1,366 post shares and over 1.3 million followers at the time of writing this biography.

Likewise, she created her self-titled Youtube channel “Carrington Durham” on January 26, 2014. She has garnered over 26 million views and earned over 437K subscribers on her channel.

For business inquiries, we can contact her at [email protected], CLUBHOUSE (@theclubhousebh), and/or Doiyen Talent Agency (@doiyentalentagency) as she is a part of these talent agencies/collaborative spaces.

Moving on, Carrington has a net worth estimation of over $550,000. She earns from being successfully involved not only in the modeling industry, working for various fashion brands, but also in the film industry as an actress. She also recently started her career as a singer, increasing further her fortune.