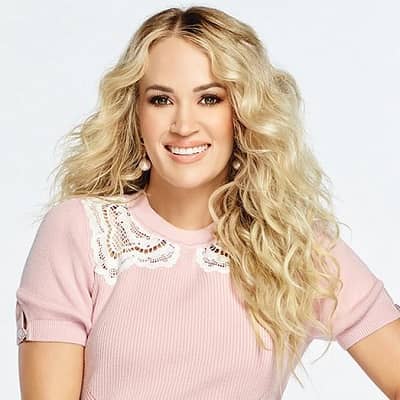 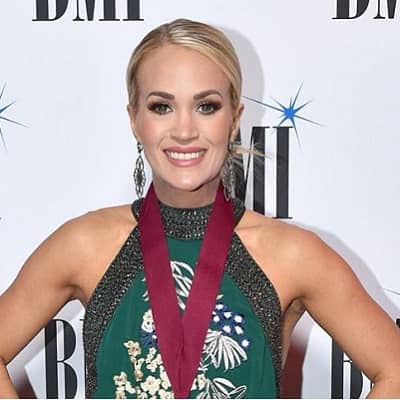 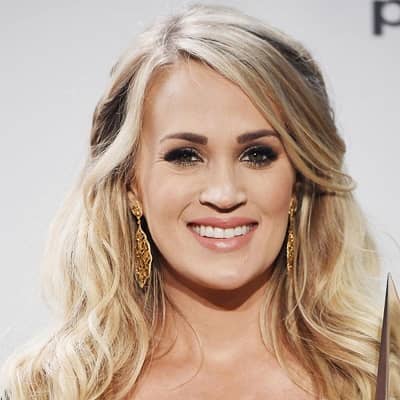 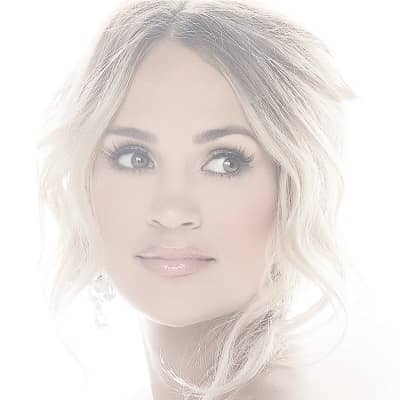 Carrie Underwood is a renowned American country singer. Carrie Underwood has bagged numerous awards and honors throughout her career in the entertainment industry since 2005. She began her journey after becoming the winner of the American Idol Season 4.

Carrie Underwood was born on March 10, 1983, and she is currently 38 years old. She hails from Muskogee, Oklahoma, and her zodiac sign is Pisces. Likewise, her full name is Carrie Marie Underwood. Talking about her family, her mother is Carole (née Shatswell) and her father is Steve Underwood.

Moreover, she has two older sisters namely Shanna and Stephanie. The siblings grew up on her parents’ farm in the nearby rural town of Checotah. Her father worked in a paper mill whereas her mother was a teacher in elementary school.

During her childhood, she performed at Robbins Memorial Talent Show. She also sang at her local church namely First Free Will Baptist Church. Young she later sang for local events in Checotah. Some of the events were Old Settler’s Day and the Lions Club.

Talking about her educational journey, she attended Checotah High School. There, young she played basketball and softball. She was also an Honor Society member in her high school. Further, she was also a cheerleader back then. Underwood then graduated high school in the year 2001 as a salutatorian. After high school graduation, the young girl chose not to pursue singing. 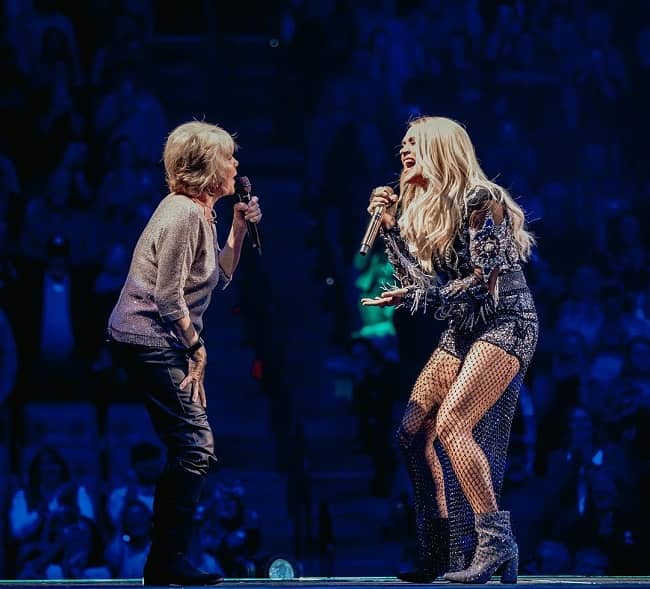 Caption: Carrie Underwood performing on stage with her mother in October 2019. Source: Instagram

At the young age of 14 years, Carrie Underwood went to Nashville to audition for Capitol Records. She actually got this opportunity when a local admirer arranged this for her. The in the year 1996, Capitol Records and she were preparing a contract. However, the company management changed and they canceled the contract preparation.

Furthermore, she spent part of one of her summers as a page for Oklahoma State Representative Bobby Frame. The young she also waited tables at a pizzeria, worked at a zoo, as well as at a veterinary clinic. She is also an alumna of the Alpha Iota chapter of Sigma Sigma Sigma sorority.

For two summers, she then performed in Northeastern State University’s Downtown Country show in Tahlequah. She also subsequently competed in numerous beauty pageants at the university. In the year 2004, Miss Underwood bagged the title of “Miss NSU” runner-up. 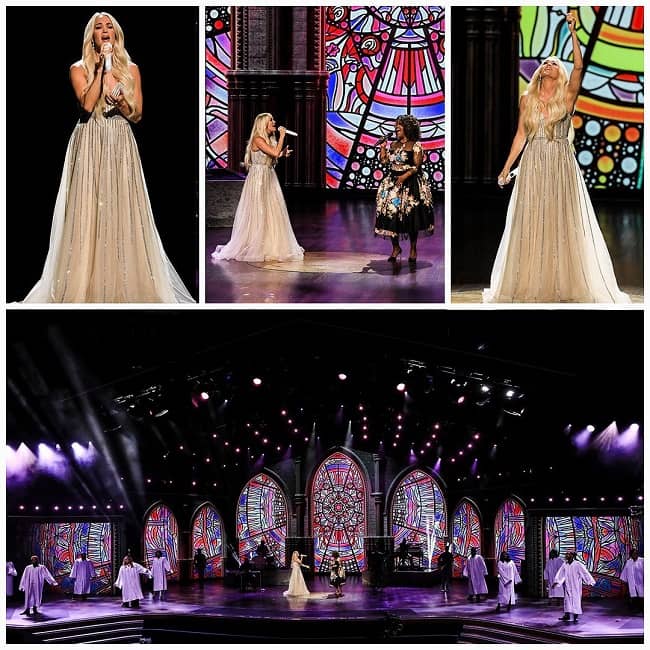 Professionally, Carrie Underwood is a remarkable singer-songwriter, record producer, entrepreneur, author, and actress. The singer gained immense fame after winning the American Idol Season 4 in the year 2005. Her debut single is Inside Your Heaven. This single made her the only country artist to debut at #1 on the Billboard Hot 100 chart. It also made her the only solo country artist in the 2000s to have a #1 song on the Hot 100.

Likewise, singer her debut album is Some Hearts and she released it in the year 2005. This album included the singles Jesus, Take the Wheel, and Before He Cheats. This album also became the best-selling solo female debut album in country music history. Moreover, in the history of Nielsen SoundScan, this album is the fastest-selling debut country album.

Further, Carrie’s debut album is also the best-selling country album of the last 17 years. For her successful debut album, she won three Grammy Awards and one of them was “Best New Artist”.

Moving on, her second album is Carnival Ride that she released in 2007. This album had one of the biggest opening weeks of all time by a female artist. Moreover, she bagged two Grammy Awards for this album. The singer’s third album is Play On that was released in 2009. Her preceding single Cowboy Casanova had one of the biggest single-week upward movements on the Hot 100. 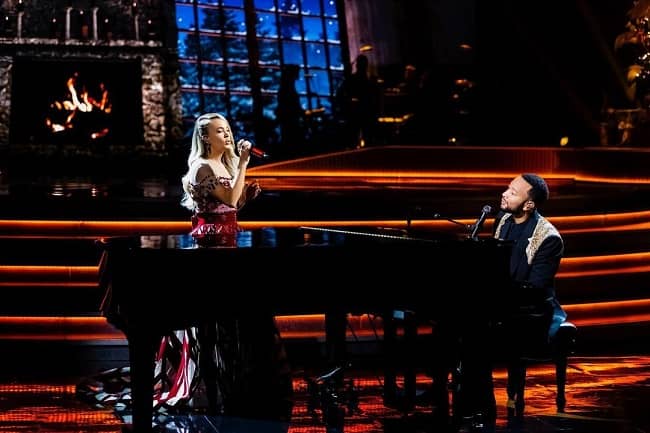 The country singer also achieved the second best-selling release by a woman in the year 2012. Furthermore, Carrie Underwood again bagged a Grammy Award for her fourth album, i.e. Blown Away. She released this album in 2012.

Moreover, her fifth album is Storyteller that she released in 2015. This album made her the only country artist to have all studio albums reach either #1 or #2 on the Billboard 200 chart. Further, the country singer’s sixth album is Cry Pretty released in 2018.

With her 6th album, she became the only woman to top the Billboard 200 with four country albums. She broke and set multiple Billboard chart records with her first Christmas project, My Gift. She also achieved this with her first Gospel collection, My Savior. The Hockey News selected her on its annual list of the “100 People of Power and Influence in Ice Hockey”. The singer ranked at #85 in the year 2012. 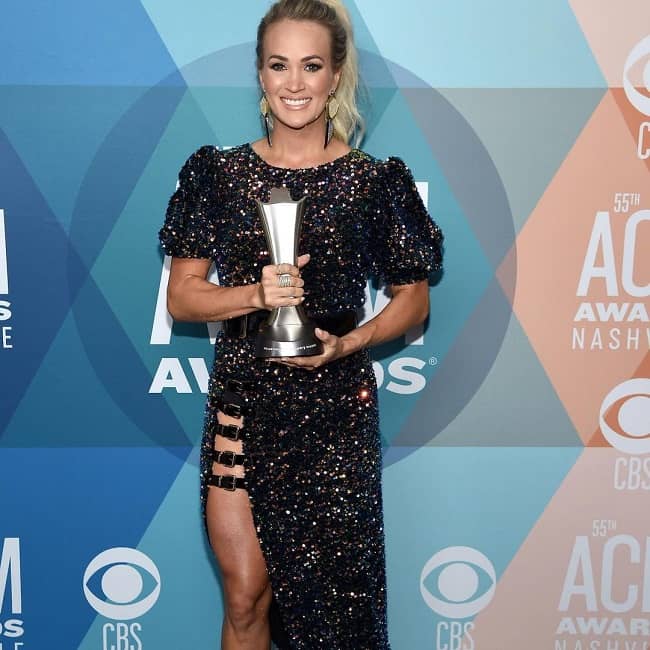 Caption: Carrie Underwood posing for a photo with her ACM Award. Source: Instagram

Additionally, she is the female artist with the most #1 entries on the Billboard Country Airplay chart. Overall, she has bagged 7 Grammy Awards, 15 American Music Awards, 11 Billboard Music Awards, and a Guinness world record. ,

Furthermore, the singer was also inducted into the “Hollywood Walk of Fame” as well as the “Grand Ole Opry”. Likewise, Billboard named her the top female country artist of the 2000s and 2010s. In the same way, Some Hearts named her with the top country album of the 2000s.

Moreover, on Pollstar, she ranked among the top 13 all-genre female touring artists of the 21st century. She records over 4.3 million concert tickets sold. Rolling Stone acclaims her as “the female vocalist of her generation of any genre”. Time also lists the singer as one of the 100 most influential people in the world in the year 2014.

Additionally, Forbes declared her the most successful American Idol winner. Outside of music, the singer-songwriter has also ventured into fashion and writing. She released her fitness clothing line “CALIA by Carrie” in the year 2015. She then released the New York Times best-selling fitness and lifestyle book Find Your Path recently in the year 2020. 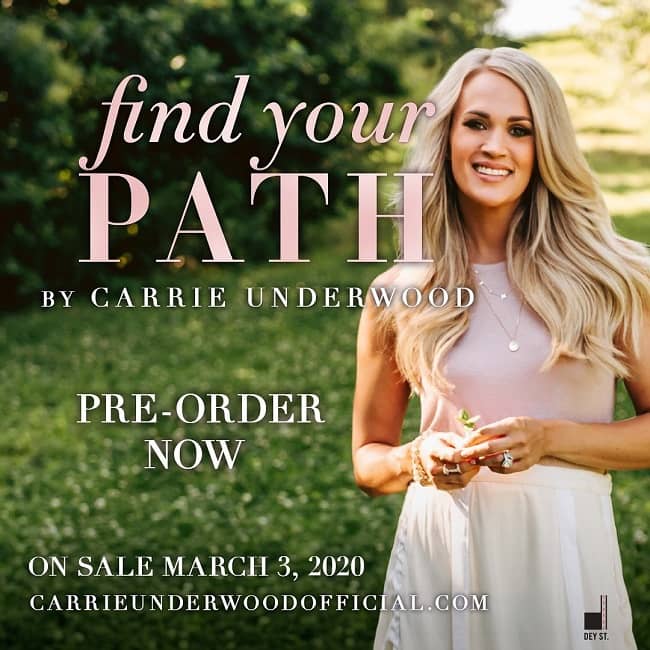 Caption: Carrie Underwood appearing on the book cover of her book ‘Find Your Path’. Source: Instagram

Carrie Underwood began dating Mike Fisher soon after the two met at one of her concerts in late 2008. Mike is a famous NHL player. The lovers soon had their engagement in December 2009. As reported by the Canadian press, Mike proposed to her in Ottawa on December 20.

The singer’s engagement ring features a yellow diamond. This ring was valued at $150,000 at the time. Then on July 10, 2010, the lovers shared the vows at The Ritz-Carlton Lodge in Greensboro, Georgia. They had over 250 people guests. The couple welcomed their first son in 2015 and his name is Isaiah Michael Fisher. The family then welcomed their second son in the year 2019 and his name is Jacob Bryan Fisher.

Unfortunately, in between the births of her two sons, she had three miscarriages. The singer told CBS News in the year 2018 that this unfortunate incident was the basis for her song Cry Pretty.

In the year 2010, the couple bought a mansion on eleven acres near Ottawa. It was in the luxurious Spruce Ridge district. She and Mike later put the mansion up for sale at an asking price of $2.2 million. Two years later in 2012, they bought a cottage outside of Nashville. The family uses the cottage for weekend getaways. 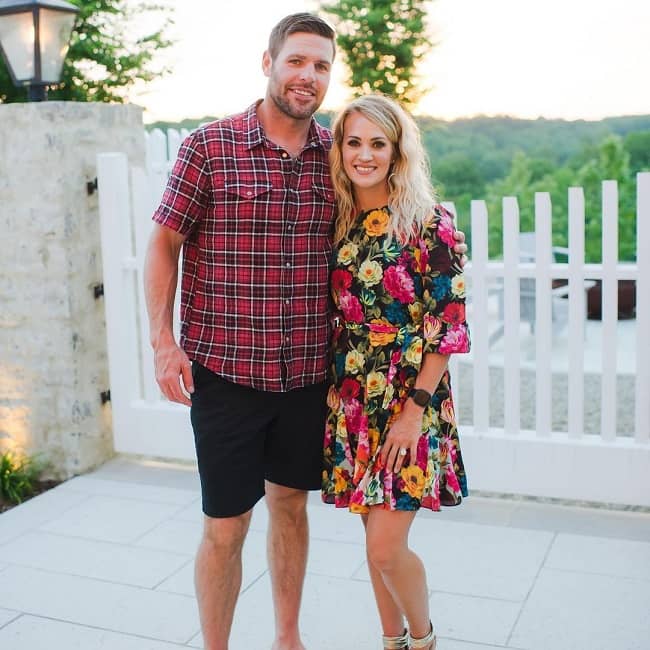 Carrie Underwood’s approximate height is 1.6 meters or 5 feet 3 inches and her weight is 53 kgs. Likewise, the country singer’s chest-waist-hip measures are 34-23-33 inches respectively. She has blonde hair and hazel brown eyes.

Furthermore, she is also active on Tiktok with more than 1.1 million followers and 3.8 million likes on her @carrieunderwood account. She also has over 11 million people following her journey on Facebook. The singer then created her official Youtube channel on March 17, 2006. So far, this channel has garnered over 1.3 billion views and 2.25 million subscribers.

She also has official accounts on other platforms like Spotify, Pandora, and Apple Music among others. Moving on, she has an estimated net worth of approximately $200 million as of 2020.