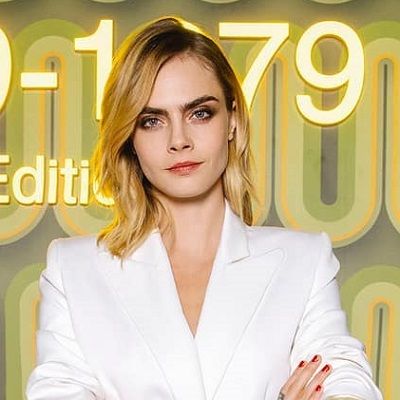 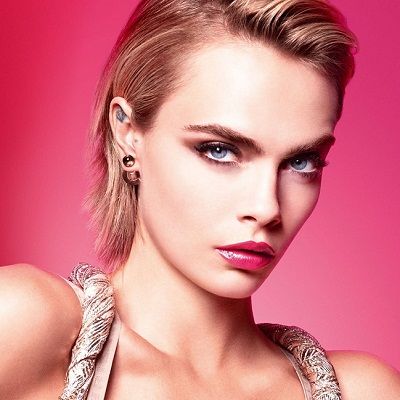 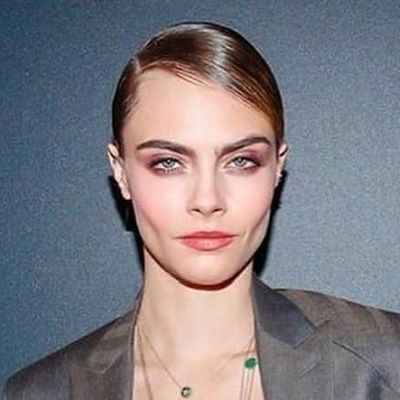 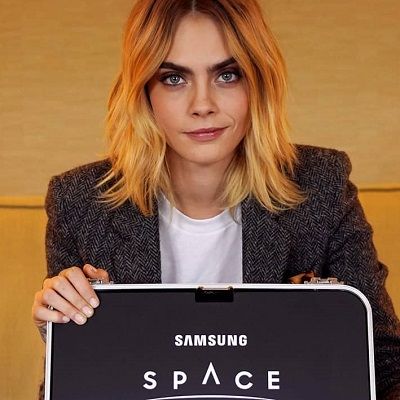 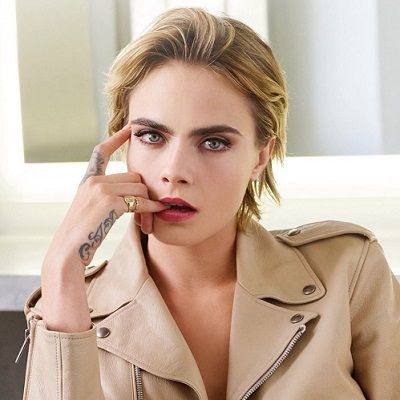 Cara Delevingne is an English model and actress famous for her endorsements with Burberry, Chanel, H&M, etc. Cara Delevingne is also popular for her roles in movies like Suicide Squad and Valerian. Moreover, she is also an openly gender-fluid celebrity.

Cara Delevingne was born to parents Pandora Anne and Charles Delevingne. She was born on August 12, 1992, in Hammersmith, London. However, she grew up in Belgravia, London along with two elder sisters Chloe and Poppy.

Poppy Delevingne is also an English Model and Actress. They also have a half-brother named Alex Jaffe. Currently, she is 30 years old and her full name is Cara Jocelyn Delevingne. The family’s surname is pronounced, “Della-been”. 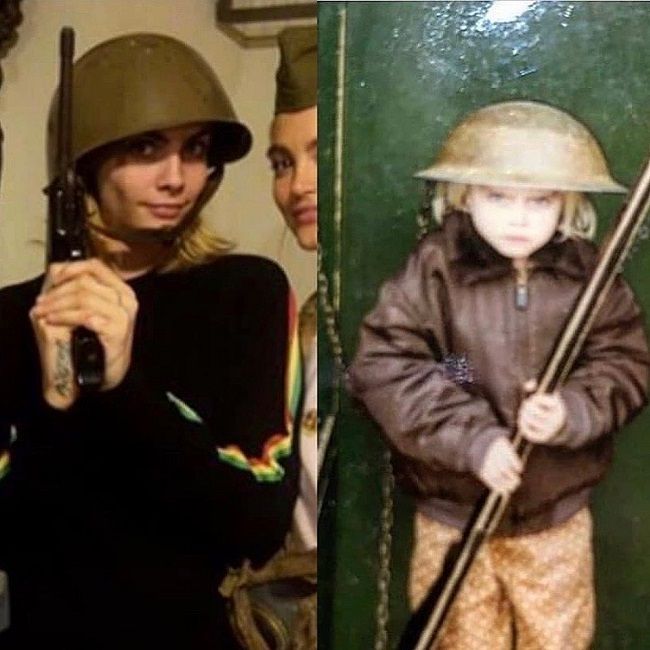 Similarly, she had difficulty at school due to dyspraxia and is also open about her struggle with depression. Furthermore, her family is one of the most renowned families in high-society London.

Her grandparents were close acquaintances of the royal family, especially Princess Margaret, hence making the family among the rich aristocrats of London.

Talking about her ethnic background, her ancestry is mostly English. One of her maternal great-great-grandfathers, Sir Lionel Lawson Faudel Faudel-Phillips, 3rd Baronet, was from a Jewish family (from Germany and Poland).

He was the grandson of Lord Mayor of London (1896/1897) named Benjamin Samuel Phillips. She also has Welsh, Dutch, German, French, Scottish, Jersey (Channel Islander), and Irish ancestry. Further, she has Canadian-born forebears.

Talking more about her family background, her paternal great-grandfather, Hamar Greenwood, 1st Viscount Greenwood, was a Canadian-born British politician. He was Chief Secretary for Ireland from 1920 to 1922.

Similarly, her maternal grandfather, Sir Jocelyn Stevens, was a publishing executive and chairman of the charity English Heritage. Through him, she descends from newspaper proprietor Sir Edward Hulton.

She also has Portuguese and Italian ancestry through an ancestress sister of the 1st Viscount of Benagazil Nobleman of Coat of Arms of Machado (crest) with a crown of Viscount and with a crown of Count for being a Peer of the Realm in Portugal.

Similarly, she is also a descendant of female lines of British Peerage and Landed Gentry, Dutch Patriciate, and Portuguese Nobility. Moreover, she is of Huguenot patrilineal descent.

Cara attended Francis Holland School for Girls until age 16 and the school is located near Sloane Square.

She later moved to Bedales School. She had difficulty at school due to dyspraxia and also struggled with depression since age 15. Furthermore, she had even dropped out of school to focus on her career.

According to Celebrity Net Worth, Delevingne has an estimated net worth of $28 million. Similarly, she also earns $9 million annually with her involvement in modeling, acting, singing, and several other fields.

Cara has been nominated 19 times for her excellent work in modeling and acting. She has been nominated for the title ‘LGBT+ Celebrity’ for three consecutive years (2016 – 2018), ‘Best Actress’, ‘Choice Model’, and ‘Choice Style Icon’, among others.

Likewise, she has bagged eight awards including ‘Model of the Year’ (2012, 2014) at the British Fashion Awards, ‘Rising Stars’ at the CinemaCon Awards, and ‘Breakthrough Actress’ at the Elle Style Awards among many other award ceremonies. 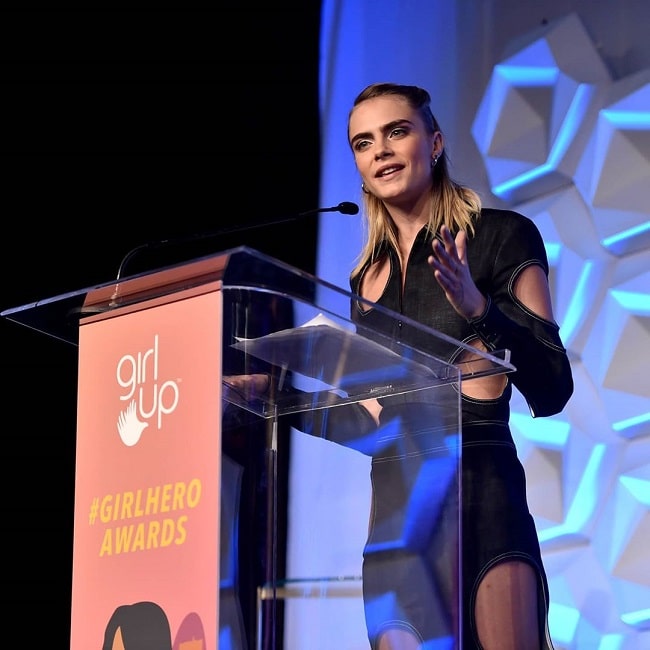 Caption: Cara delivering a speech during an event on Women’s Day 2020. Source: Instagram

Furthermore, she was named London’s 1,000 Most Influential of 2011 by the ‘Evening Standard. Likewise, she also became the most googled fashion figure in 2013 and was included in 100 Makers of the 21st Century in March 2014 by the ‘Times Magazine’.

Cara Delevingne is among the few openly gender-fluid personalities in the glamor world. She came out as a genderfluid in May 2018. Similarly, she confirmed her relationship with American musician St. Vincent in June 2015 and they separated in September 2016.

Currently, she is dating American actress and model Ashley Benson. She confirmed their relationship in June 2019 and also stated that they had been together for over a year already. 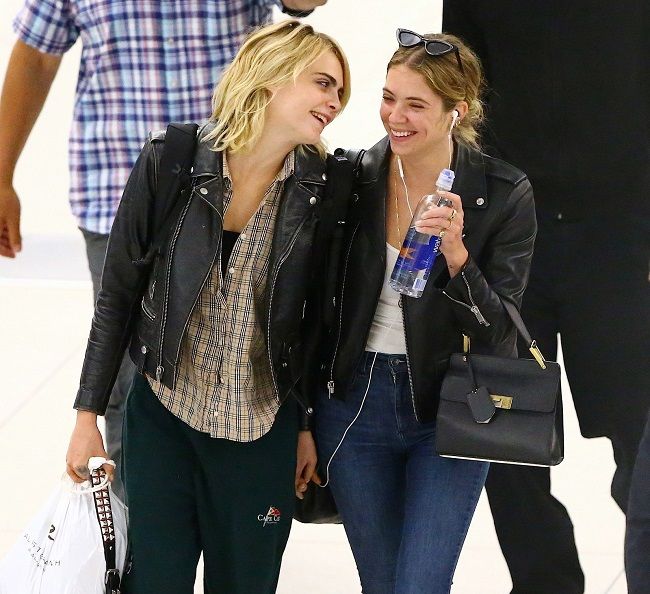 Caption: Cara was photographed with her girlfriend Ashley. Source: Global

The British supermodel said that rather than going clubbing she would rather stay and have sex with her partner. She even stated that she is better at giving orgasms than receiving them.

Further, she stated she is great at giving love but finds difficulty to receive pleasure during sex. She came out as genderfluid back in May 2018.

Previously she dated American musician Annie Clark between 2014 and 2016. She also romantically connected with several other celebrities including Michelle Rodriguez, Rita Ora, Harry Styles, and Jake Bugg, among others.

Cara gained her initial fame through modeling. Delevingne started modeling at the age of 10. Similarly, she modeled for Vogue Italia alongside model Lady Eloise Anson. She signed a contract with Storm Model Management in 2009.

Similarly, seven got recognition after she appeared on Burberry’s Christopher Bailey in their spring/summer 2011 campaign.

Furthermore, she has modeled for designers, Derek Lam, Tory Burch, and Jeremy Scott among others. Similarly, she has ramp-walked in Paris, London, Singapore, Salzburg, Jason Wu, Donna Karan, and Tory Burch.

Moreover, she has also worked for brands like Saint Laurent, DKNY, Blumarine, Zara, Mulberry, Balmain, Marc Jacobs, and Dominic Jones Jewelry, among others.

She also appeared on the covers of Vogue UK thrice, Vogue (Korea, America, Australia, Brazil, Japan, Portugal), LOVE, i-D, Russh, Jalouse, and Style.com, W, among others.  Moreover, she also became the face of DKNY in late 2012 and Yves Saint Laurent Beaute in January 2015.

Similarly, she made her film debut with Anna Karenina (2012). Her other movies include PaperTowns (2015), Suicide Squad (2016), and Valerian (2017) among others. Moreover, her first appearance was in Vogue Italia at age 10 and the photoshoot was done by Bruce Weber.

Likewise, she made her television debut in a final episode of Playhouse Presents in the role of Chloe in 2014.

She also acted in a sketch for an annual 90-minute comedy TV event, The Feeling Nuts Comedy Night in October 2014. Further, she starred as a series regular as Vignette Stonemoss in the upcoming American neo-noir fantasy web television series, Carnival Row.

She is also well known for advocating for LGBT+ rights and animal conservation. Moreover, she is also good at beatboxing, drumming, and playing guitar. Her music includes the song CC the World and her vocals featured in St. Vincent’s studio album Masseduction.

She has designed two fashion collections for DKNY and Mulberry, and four handbags/rucksack collections for Mulberry. Furthermore, she released her novel titled Mirror Mirror in 2017, debuting as a writer on October 5th, 2017.

Cara has a bubbly personality and unique/thick eyebrows and she is quite popular for these. She also likes to play Scrabble and Boggle and sing in the shower.

Furthermore, she ranked #10 on Maxim’s “Hot 100” of 2014 list and the “Mulberry Cara” designer ‘camouflage’ backpack is named after her. Moreover, she didn’t have any formal acting training or coaching.

She is also a fan of actress Charlize Theron and she often photobombs at events. She has a pet rabbit whose name is Cecil.

Similarly, she occasionally suffers from outbreaks of stress-related psoriasis. “Cara” is also the word for “Face” in Spanish, “Expensive” or “Dear” in Italian, and “Way” in Indonesian. Also, she is good friends with Margot Robbie and Amber Heard.

Furthermore, she was among the 93 women who accused Harvey Weinstein of sexual harassment or assault on 31 October 2017.

Some hair colors she has tried include silver, pink, platinum blonde, and purple among others. Moreover, she wears a bra-sized 32B and a shoe size 8.5. Her chest-waist-hip measurement is 32-24-34.

Additionally, she also has numerous tattoos inked on her body. Among all, she considers the tattoo of an elephant the most important one as it represents the memory of her late grandmother.

Similarly, her other notable tattoos include a tattoo of a lion on her finger that represents her zodiac sign – Leo, a MADE IN LONDON on her left foot, her lucky number XII – a Roman numeral, silence, snake, Don’t worry be happy, and breathe deep among many more in different parts of her body.

She is active on Tumblr and was the most re-blogged model in  2013. Although she doesn’t have a channel on YouTube, we can find her easily in numerous videos of her interviews and shows.