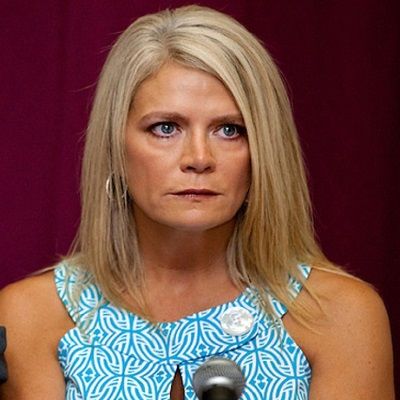 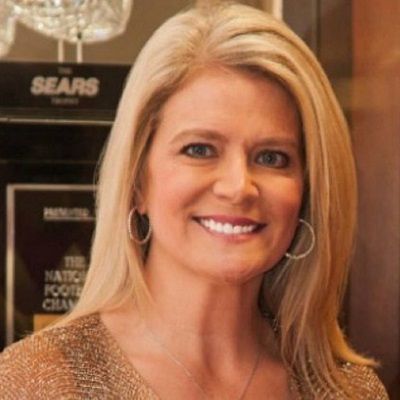 Candi Fisher, whose full name is Candace Leigh Coogler, is the ex-wife of an American football coach and former player Jimbo Fisher. Candi Fisher is also the chairman of ‘Kidz1stFund’, a non-profit organization aimed at raising awareness on Fanconi Anemia.

Candi Fisher was born in December 1969 in Auburn, Alabama. Her age as of today is 52 years old. Father Franklin Coogler and Mother Suzanne Ballard gave her the birth name Candace Leigh Coogler. She grew up with two brothers Dustin Cale Coogler and Franklin Craig Coogler.

Candi has been a football fan long before she met Jimbo and picked up sports as a subject choice during high school. Further, Candi completed her education from Samford University in Birmingham, Alabama. 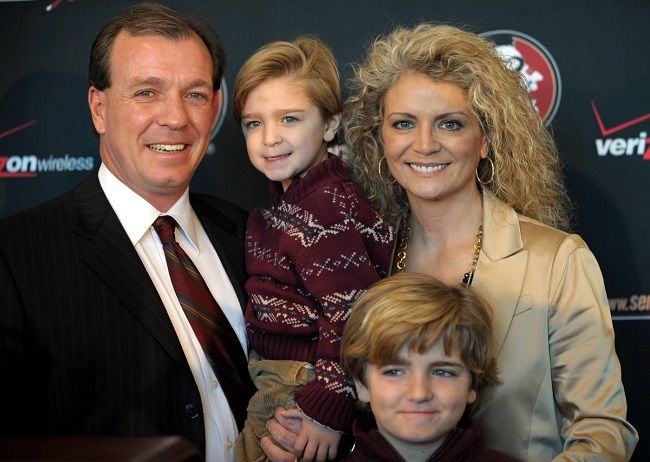 Cardi came into public attention only after her marriage to ex-husband Jimbo Fisher. While other details on her early career are unknown, she currently serves as the chairman of  ‘Kidz1stFund‘. It is a non-profit organization aiming to spread awareness on Fanconi Anemia. Besides this, she has also contributed as an author in Shannon O’Neil’s novel, ‘Killer Shine’. For the novel, she described the Fanconi Anemia disease.

Moreover, Candi is an American school teacher. She has worked as a middle and high school English teacher and has graced the covers of a number of magazines including the Tallahassee Woman.

Fishers and their organization have put a significant impact on raising awareness on Fanconi Anemia. However, their efforts have not received public recognition.

Although Candi’s actual source of income is uncertain sources report her net worth is about $1 million. However, her ex-husband is among the highest-paid college football coach. He annually earns $500,000 along with a supplemental income of $7 million annually after signing a 10-year, $75 million deal with Texas A&M. The contract also includes one country club membership and the use of two luxury vehicles.

Besides, he had earned a nice amount from his previous coaching career. As a whole, his net worth is estimated to be above $20 million as of 2019.

Jimbo paid his ex-wife a sum of $3.4 million and also $4,500 per month for her child support as alimony. Furthermore, Candi hasn’t reported any personal assets but as per some of the sources she has a well-furnished house and cars as well.

At present, she is not signed as a brand ambassador for any brands or products. Nevertheless, she will surely involve in the brand endorsement of major brands in the coming future.

Candi met Jimbo for the first time while he was at Samford University in Birmingham, Alabama. The two instantly became friends and eventually started dating. Candi is a huge football fan since her childhood and some say that this might be the reason why she married the famous football coach Jimbo. The couple’s married life started on the 22nd of July 1989 until 10th December 2015. While together, the pair had two children: elder Trey and Younger Ethan.

While Ethan was only 9, doctors diagnosed that he had an incurable life-threatening blood disease called Fanconi Anemia. This is a rare, inherited blood disorder that leads to bone marrow failure and an increased risk of cancer. Moreover, Trey is pursuing a professional football career.

She is currently residing in Tallahassee, Florida, where her family resided before Jimbo moved to College Station in December 2017 to coach the Texas A&M team. 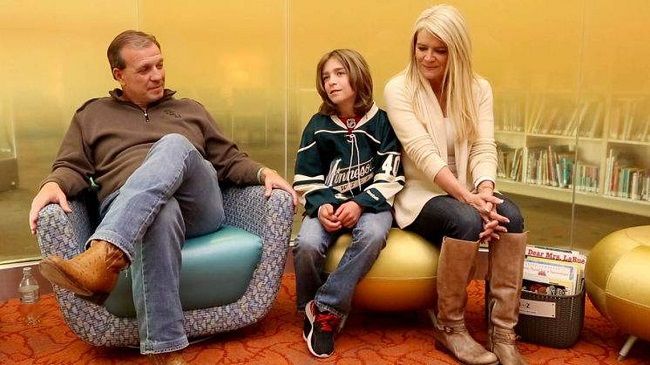 The decision of the Fisher couple to call off their 22-year long marital relationship was a matter of public concern. Rumors say Candi had a number of extramarital affairs. Two of them were former tennis player Owen Long and former football player Tylor Jacob. On 10 December 2015, the divorce left Candi with $3.4 million and $ 4500-a-month child support.

The names came to light during the hearing of Candi and Jimbo’s divorce case. In addition to this, there aren’t any further details about her current relationship status. She is involved in many charity programs and helps to collect funds for several events.

Candi was scheduled to be deposed in the case on December 9, 2015, according to court records. Among the topics that  Jimbo’s West Palm Beach lawyer, John T. Christiansen, wanted to discuss with Candi were her finances, the divorce papers show.

She was also asked her to bring “Any and all text messages and/or emails to and/or from Taylor Jacobs and/or Owen Long from June 1, 2013.” Christiansen also wanted emails and text messages from any third party to Candi referring to Jacobs and Long.

However, Candi didn’t have to show up for the deposition with her emails and text messages because a day later, on December 10, 2015, the case was settled. The divorce papers show Candi first hired a divorce attorney in October 2014. Then she left the Fishers’ marital home in April 2015. Initially, Jimbo filed for divorce in early July, shortly after he found out about Long.

As per Tallahassee charity circuit archives, Long was Candi’s guest at a Kidz 1st Fund fundraiser. More precisely, it was the November 14, 2014 event in downtown Tallahassee.

How is their relationship now?

After the divorce, the then-couple pledged joint parenting for their children as well as the joint running or the Kidz1stFund Foundation that the than-couple jointly created. Jimbo visits Tallahassee to meet his sons, who primarily stay with their mom. The duo especially takes care of Ethan, joining him together to his annual check-up and bone marrow biopsy.

While speaking at his introductory news conference as A&M coach on 4th December 2017, Jimbo hinted that Candi will also move to College Station to stay close to the family. Nevertheless, Jimbo has begun a relationship with a lady named Courtney Harrison while Candi remains single.

Even at the age of 50 years, Fisher has maintained a fit body. She lives as a healthy being. However, her physical measurements are unavailable. Additionally, she has blond hair with a pair of blue eyes. 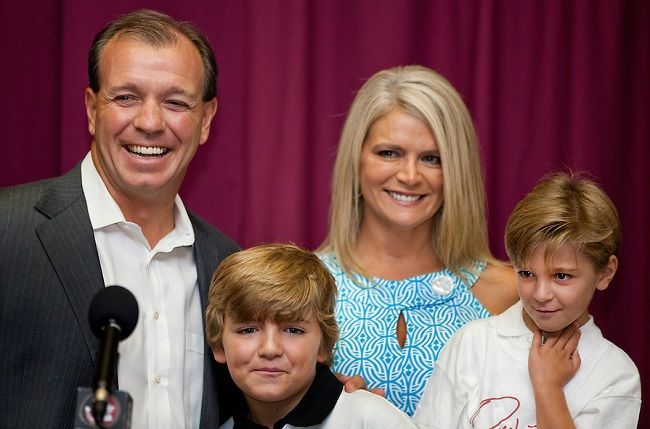