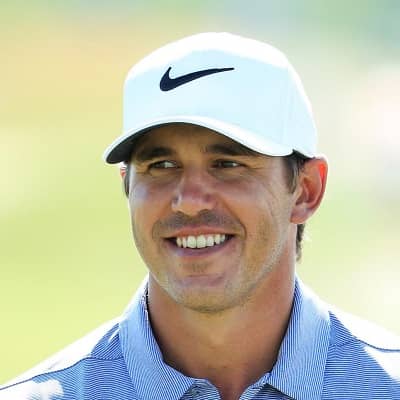 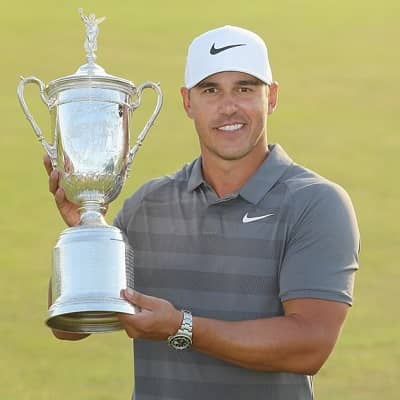 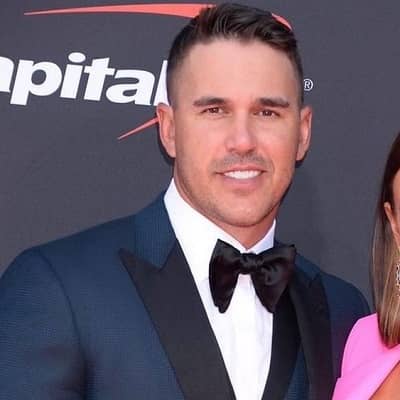 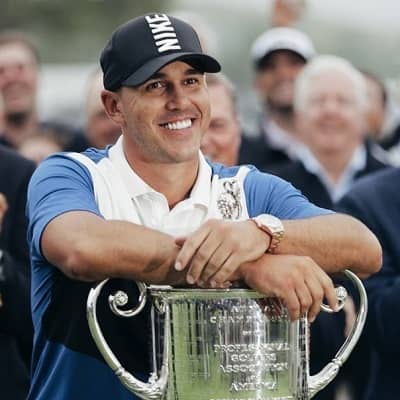 Brooks Koepka was born on May 3, 1990, and he is currently 31 years old. He hails from West Palm Beach, Florida, and grew up in Lake Worth. Likewise, Brooks’ zodiac sign is Taurus. Regarding his educational journey, Brooks Koepka Cardinal Newman High School in West Palm Beach. Later on, he joined the Florida State University. There, Brooks played college golf.

Talking about his family, Brooks Koepka has a younger brother named Chase. Chase is also a professional golfer just like Brooks. The Koepka siblings played as partners in the 2019 Zurich Classic of New Orleans on the PGA Tour. It is the only Tour event using a team format. Moreover, Brooks’ great uncle is Dick Groat. Groat is a Major League Baseball player. Their mother’s name is Denise Jakows and their father is Robert Koepka. 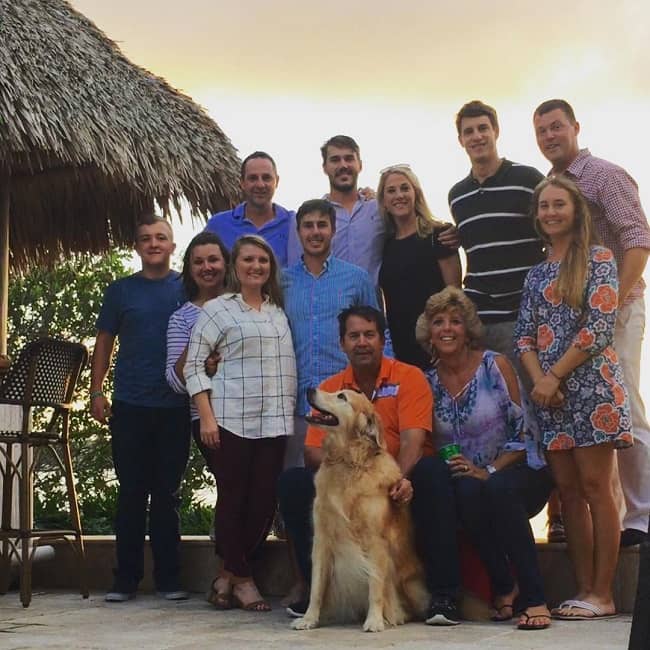 Caption: Brooks Koepka posing for a photo with his family during thanksgiving 2015. Source: Instagram

Following these wins, Brooks Koepka became the 1st golfer to hold back-to-back titles in two majors. The professional golfer then started his career on the European Challenge Tour. Subsequently, Brooks also started a career in the European Tour.

Likewise, Brooks Koepka won his first major championship at the U.S. Open. This was in the year 2017 at Erin Hills, Wisconsin. Also, Brooks later defended his title in 2018. This was at Shinnecock Hills on Long Island. He became the 1st golfer to win consecutive U.S. Opens. Prior to him, the other golfer to win this title consecutively was Curtis Strange who bagged the title in 1988 and 1989. 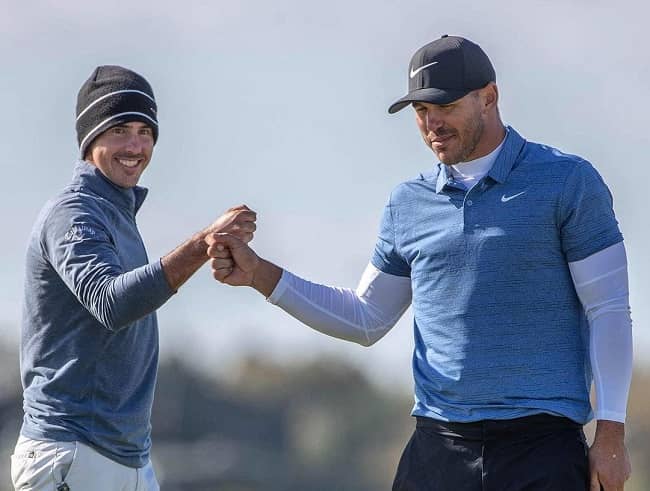 Talking about the beginning of his golf career, Brooks Koepka played college golf at Florida State University in Tallahassee. There, the then-amateur golfer won three events and was a 3-time All-American. The golfer then turned professional in the year 2012. In the summer of this year, he played on the Challenge Tour in Europe and also won his 1st title in September the same year at the Challenge de Catalunya.

From then on, Brooks won various titles throughout his golf career. Recently in 2020, the golfer suffered from hip and knee pains for the majority of the season. Therefore, Brooks withdrew from the competition prior to the FedEx Cup playoffs. Then in February 2021, the professional golfer won the Waste Management Phoenix Open. This was held at TPC Scottsdale in Arizona.

The same year, the golfer also overcame a five-shot deficit on the final day. This was Brooks’ 2nd win at the event. Then on 16 March 2021, the professional golfer underwent knee surgery. Besides his career in golf, Brooks is also the owner of the charity organization “Brooks Koepka Foundation” and the food & beverage brand “Havsies”. The golfer’s sponsors include Nike, Rolex, Infor, Michelob Ultra, and Netjets. He also introduces himself as a Nike Athlete on his Instagram bio. 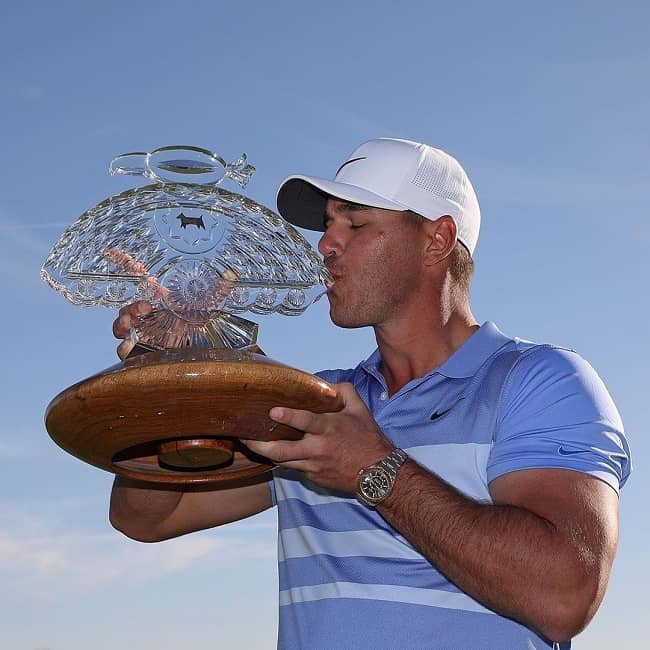 Brooks Koepka recently engaged to Jena Sims. The couple announced their engagement news on April 1, 2021. While it is unclear how Koepka announced the news to the public, his fiancee shared the news through his Instagram profile. Jena shared a series of photographs where Brooks proposed to her on a beach. Brooks shared an Instagram photo featuring Jena Sims for the first time on August 23, 2017. Since then the couple has shared numerous photos featuring each other on their respective accounts. 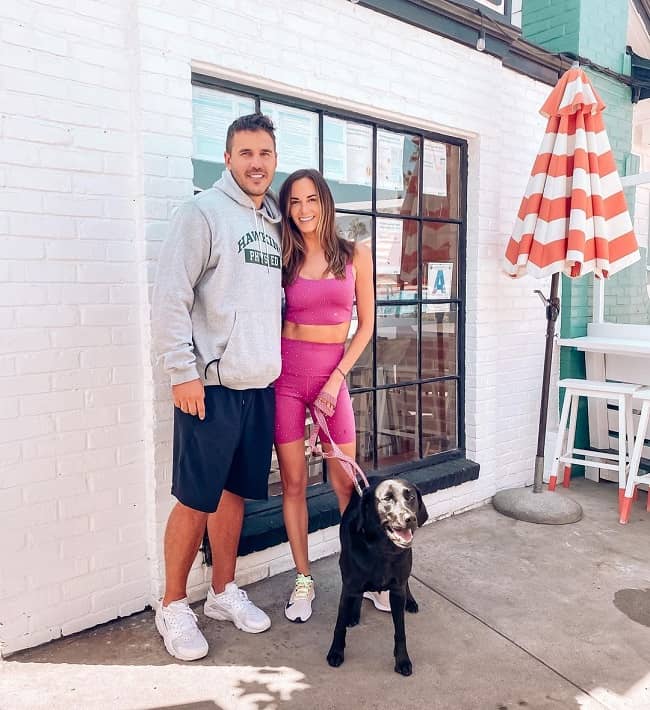 Caption: Brooks Koepka posing for a photo with his fiancee Jena Sims and their pet Cove. Source: Instagram

Brooks Koepka stands tall at an approximate height of 6 feet or 1.83 meters and his bodyweight is around 205 lbs or 93 kgs. Likewise, Brooks has brown eyes and hair of the same color.

Talking about his social media presence, Brooks Koepka joined Twitter in March 2011 and so far has over 376.5K followers on his @BKoepka account. Likewise, he has over 71K people following his journey on Facebook. He is also available on Instagram under the username @bkoepka. So far, this account has garnered over 913k followers. Moving on, Brooks Koepka has an estimated net worth of around $8 million US dollars.